It is now almost certain, the quantities processed in 2018 will probably not reach 35 million metric tonnes (mT). The recent review of the season's progress, marked by very specific and adverse weather conditions in the spring and summer, shows that many of the world's leading countries have revised their processing outlook for the year 2018. This will be the case in Italy, Spain and California; overall, the decrease in activity from the initial intentions in 2018 represents more than 6% (about 2.3 million mT), and almost 8% - 3 million metric tons - compared to the result of 2017. This means less than 34.8 million mT should be processed this year, one of the lowest levels in the last ten years and below the estimated level of global consumption. 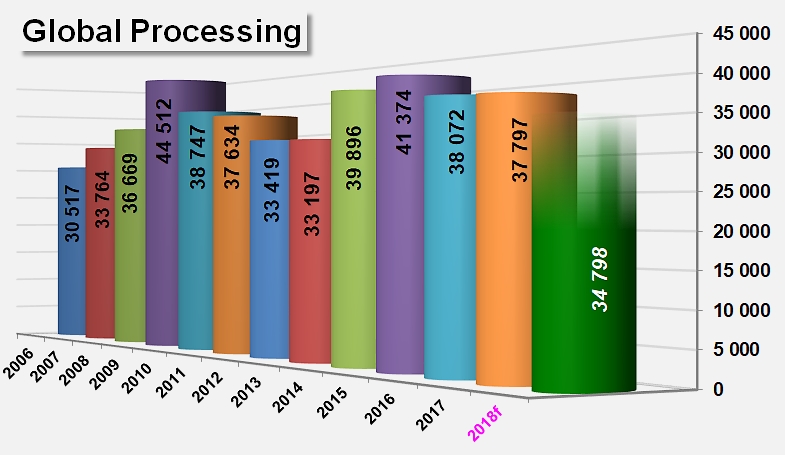 AMITOM members in the EU
In Portugal, the crop is going according to the last plan with factories reaching full capacity. At the  end of last week (25 August), the volume processed was about 25% of the quantity now expected to be processed (1.1 million tonnes) so September will be crucial.

In Spain, the season is the latest on records but the harvest has been progressing well over the last two weeks. In Andalusia, about 45 to 50% of the forecast has now been processed. There is currently a lot of pressure from the fields and some tomatoes may be lost as factories cannot absorb them all. In Extremadura, about 35% of the forecast has now been processed. Factories are running at full capacity but the harvest is going smoothly. Quality is normal with a good colour but if brix are high in the north of the region they are now lower than average in the south. The weather has been hot, but not extremely so, and the late tomatoes will ripen earlier than scheduled. A good September will be needed to achieve the forecast.

In France, at the end of last week, 67,000 tonnes had been processed, which is 45% of the current 150,000 tonnes forecast. Quality is good with an average brix of approximately 4.9.  Some new tomato varieties are now ripening after 96 to 100 days instead of the usual 110 days which makes the crop scheduling more difficult. It is now primordial to have no rains in September to achieve the reduced forecast.

In the North of Italy, it is estimated that 1.55 million tonnes had been processed as of 26 August, 63% of the forecast of 2.45 million tonnes. 22,000 hectares out of 35,000 hectares have been harvested. Some rains last weekend interrupted the harvest for a day which slowed or stopped factories briefly. This week, factories are running at almost full capacity. The late crop is maturing earlier meaning the crop will finish at the middle of September. Fruit quality is mainly good but brix has reduced after the rain (4.8 or less). Consistency is now better for dice and pulp production but the quantity of these products processed this year will be lower.
In the South of Italy, the situation is different with the crop delayed by 7 to 10 days partly due to rains between 15 and 23 August. The harvest is currently at full speed. As of 19 August, 40% of the total crop had been harvested, with more for round tomatoes and less for long, but yields are lower than last year for both types. The forecast remains 2.3 million tonnes but after the wettest August for the last ten years, September will be crucial to achieve the overall forecast for Italy of 4.75 million tonnes.

In Greece, despite some rains over the last few days, already 250,000 tonnes, 80% of the 320,000 tonnes forecast has now been harvested, making it the earliest crop ever. Average brix has improved a bit and is now about 4.75°. The industry now hopes there will be no rains for the rest of the harvest.

In Hungary, about 60% of the total volume of 120,000 tonnes has already been processed. The conditions remain very good with perfect quality concentrate. 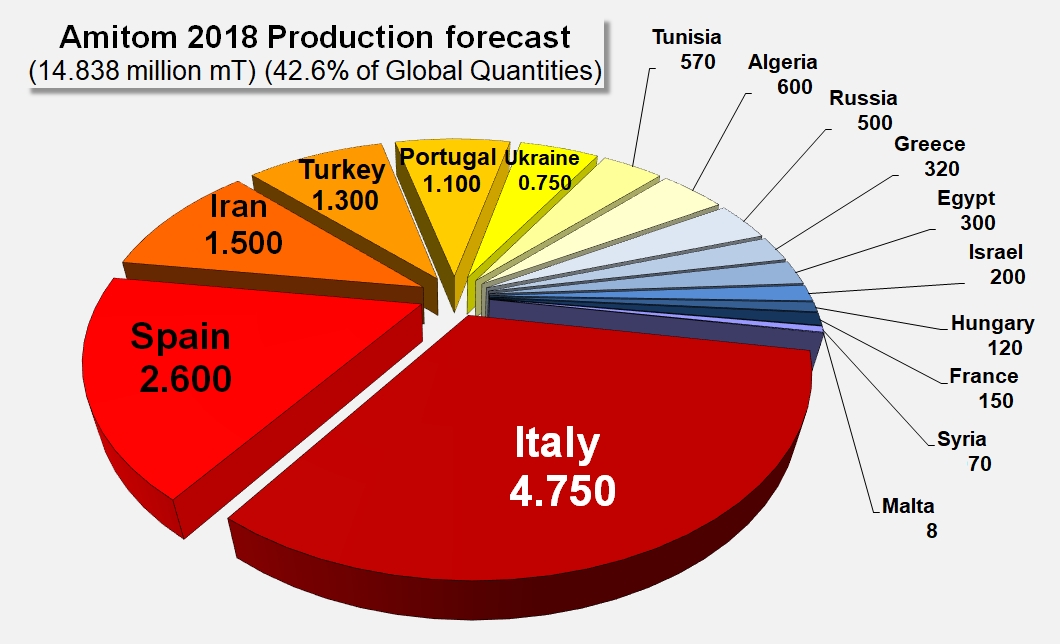 In Turkey, the high competition for tomatoes on the open market has pushed prices to up to 800 TRL/t (106 €/t) when contract prices were 350 TRL/t (46 €/t) and it is impossible to make deductions for poor quality or MOTs. It is not easy to make a precise forecast but it is estimated that the gross volume delivered could be 1.5 million tonnes, giving a realistic estimate of 1.3 million tonnes been processed. Quality is still not optimal but colour has improved since the start. Harvest will continue for a maximum of two weeks.

In Ukraine, the weather in the second half of August was good. Average temperatures were 28-30°C at day and 20-22°C at night. It was dry and sunny most of the time. Quality of tomatoes harvested in the second part of August was good. Solids have been improving constantly and rose up to 4.65 on average for a country. Which is still below expectations of processing managers. About 350,000 tonnes of tomatoes have been processed to date which is about 46% of 2018 program which is maintained at a level of 750,000 tonnes. 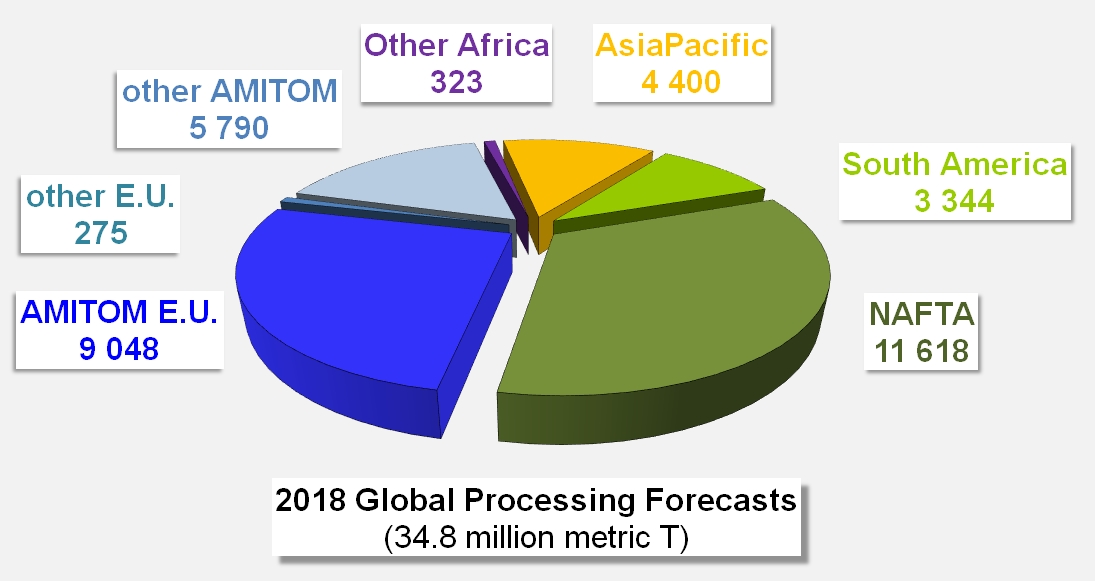 Other WPTC countries
In Brazil, ABRATOP reported that the official transplanted area was 15,900 hectares for a forecast of 1.32 million tonnes. The harvest started in July. The climate has favoured, so far, both the development of tomatoes as well as the crops in the three main producing regions (Goiás, Sao Paulo and Minas Gerais states). No pest or representative disease occurred in tomato crops. The consumption of tomato derivatives is returning to normal but slowly and gradually in Brazil.

In California, according to PTAB estimates for the week ending August 25, 1,156,894 short tons (1,049,419 metric tonnes were delivered to the factories. Another 1,150,225 short tons (1,043,369 metric tonnes) are estimated to be delivered the week ending September 1st. If achieved, it would make six weeks of over 1,000,000 tons harvested (there were only two weeks of 1,000,000 plus tons harvested in 2017), and would bring the harvested total quantity up to 7,582,102 short tons (6,877,725 metric tonnes).
According to the latest Processing Tomato Report released by USDA on 28 August 2018, contracted production for California processing tomatoes is now forecast at 11.8 million short tons (10.704 million metric tonnes), averaging 50.4 short tons per acre (113 t/ha). Average solids to date are 5.14 (average of 5.26 in 2017. The current forecasted production is 13.4% above the 2017 crop, and 0.8% below the May forecast. The projected harvested acreage of tomatoes grown under contract is 234,000 acres (94,696 ha), an increase of 5.9% compared to 2017.
The report states that “high summer temperatures resulted in the crop developing sooner than planned in some areas of the state. Harvest began in early July, with a slightly slower start than in 2017, but caught up by the third week. Yields were reported to be good and above contracted levels. With a larger crop, sugars are expected to be lower compared to last season. Water availability has not been an issue and there were minimal concerns about disease and pest pressure reported.”

In Canada, Ontario harvest is now underway with approximately 20% of total contracted tonnage delivered to date. Quality and colour of fruit is reported to be good to excellent. The heat and humidity we are currently experiencing has the crop ripening very quickly at this time.

The weather condition in Inner Mongolia have been abnormal with several periods of rain in July and August. This led to very low brix and very soft fruits which pushed the farmers to deliver earlier, meaning the factories reached full capacity fast. Currently, however, factories have had to lower their processing speed as there is not enough fresh tomatoes. It is likely that most of the processors may not reach their target but the final output still needs evaluation.
In Northern Xinjiang, the quality and yield of tomato is good thank to the favourable weather, however most factories cannot meet the environmental regulations and have to lower their capacity, which delays the harvesting of tomato. Some areas are also suffering from the lack of tomatoes.
In Southern Xinjiang, they also suffer from the low brix. The factories are also asked to lower the capacity due to the environmental regulation issue.
The total forecast of 3.7 million tonnes for China still seems reasonable.

In South Africa, the hot weather can influence the crop negatively. The estimate remains unchanged for the time being but will be updated with the next report.

Other countries
The US Midwest crop continues to look big with yields. Persistent rains have slowed harvest but have been spotty in nature so it has never totally stopped production but has been difficult for those who have been most affected. Rain totals in excess of 5 inches in the last week have hit some growers.

In Poland, the estimate remains to process 180,000 tonnes from the 2,800 hectares planted (expected average yield of 65 t/ha). Contract price is 400 PLN/t (95.2 €). The harvest started on 26 July and should finish around 10 October. The weather was good in May but very hot and dry since June and July, causing losses due to drought in the north part of Poland, although the situation was much better in the southern regions. The only rainfall has been from local storms. There is a low appearance of diseases and pests. 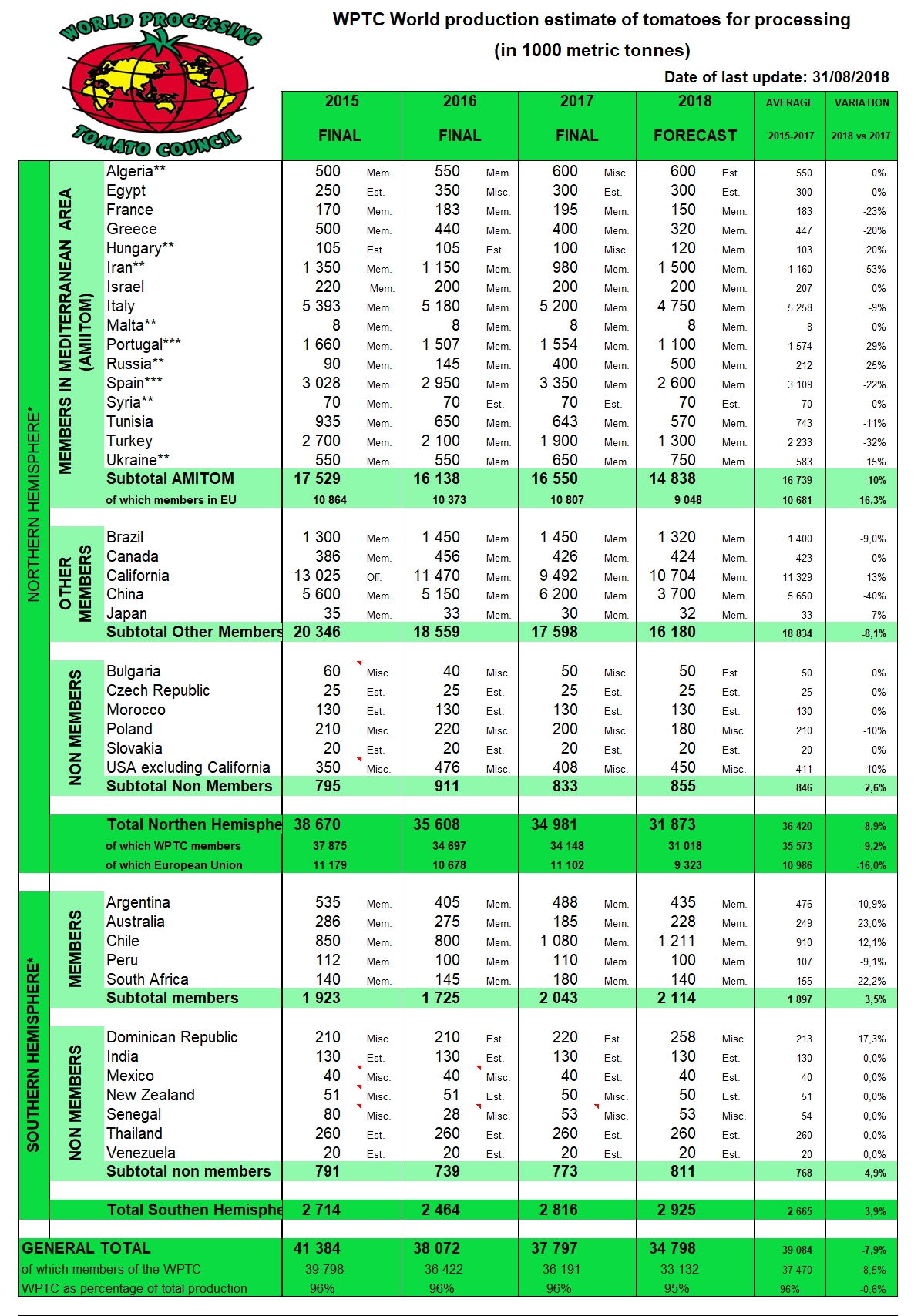