AMITOM members in the EU
In France, the board of SONITO met this week and established that the surface planted will be quite similar to last year at 2,074 hectares instead of 2,190, of which 342 hectares organic (16%). The forecast is around 155,000 to 160,000 tonnes. Planting just started this week in the South East but it is too cold to start in other areas. Planting will start mid-April in the South West. Soils are very dry but there are water reserves and no issue are foreseen with water availability as the soil was wet in the South East. It could be different in the South West because of less rainfall in autumn. The prices have not been set yet but should remain similar to last year.

In Greece, the winter was very wet with a lot of rain and snow, and more snow expected in the mountain so there is more water than needed and no issue for tomatoes. The forecast remains 400,000 tonnes and the price should be similar than last year (85 €/t delivered) or with a small increase. Planting will start next week in the south.

In Hungary, the majority of farmers growing for the largest processor (Univer) decreased the volume contracted because of unsuccessful negotiations. In consequence, the new forecast is 100,000 tonnes (Univer) + 20,000 tonnes (other processor) so a total of 120,000 tonnes instead of the initial 140,000 tonnes.

In the North of Italy, there is a serious drought alarm as the winter and spring have been very dry with rainfall 40% lower than average. The price negotiations are ongoing with the last proposal from processors of 86 + 1 €/t ex field not accepted by growers. The POs have made an agreement to keep the total planted area below 35,800 hectares with internal sanctioning system. The forecast remains stable at 2.5 million tonnes.
In the Centre & South of Italy, the last month saw little rains and the soils are dry but there are good water reserves so no concerns with water availability. Planting will start next week. Operators are waiting for the price to be set in the north before finalising pricing. The forecast remains 2.4 million tonnes.
The total for Italy therefore remains 4.9 million tonnes.

In Portugal, the winter was very dry with not enough water/rain, but no issue is reported so far. The spring is very warm. A few growers will start planting end of this week but most of them will be next week. The official forecast is 1,263,195 tonnes for a surface of 14,375 hectares. Price differ between the factories but should remain similar to last year at between 70 and 80 €/t ex field.

In Spain, it is expected that 50% of the surfaces will have been planted by the end of the week in Andalucía where it started in early March and planting will start later this week in Extremadura. The winter was very dry and warm, but no issue of water availability is expected. Prices should remain similar to last year at about 70 €/t ex field or 75-77 €/t delivered. The forecast is increased to c. 3 million tonnes.

Other AMITOM members
In Algeria, there was an abundance of rain during the winter and the reservoirs are full so there is no worry about water availability. The high import taxes which were recently announced will stop imports and farmers are keen to grow tomatoes. Production should therefore exceed 600,000 or even 700,000 tonnes.

The draft Russia forecast, that has been collected at the moment is 550,000 tonnes to be processed in 2019 season. No new players, but there are plans to increase the production from the existing factories in Astrakhan, KBR, Volgograd.

In Tunisia, planned area for the seasonal tomato crop is 17,500 hectares, with an estimated average yield ≈ 66 t/ha. The total production estimate is 1,160,000 tonnes of which 850,000 tonnes intended for the production of tomato concentrate (≈ 130,000 tonnes of 28/30 paste) and 30,000 tonnes for the production of canned tomatoes (≈ 22,000 tonnes of canned). The base price for tomatoes is 170 TND/t ≈ 50 €/t. Transplanting of tomato plants began on February 20, 2019 in the central regions (Gafsa, Kairouan, Sidi Bouzid) and Cape Bon and the areas planted until 18 March 2019 reached 3,500 hectares. The rainfall of the months of January and February has restored the deficit in water resources (groundwater, dams ...) cumulated for 3 years. Current weather conditions are favorable for transplanting tomato plants. The actual start of the harvest is scheduled for the last week of June 2019.

In Turkey, the surfaces planted should increase by 20% in the south compared with 2018 as farmers are quite keen to plants, whereas in the north farmers are more reluctant to plant. Contract price offered are varied but average about 500 TRL/t ex field. The winter has been cold but there is no issue so far. The forecast remains 1.9 million tonnes.

In Ukraine, the winter was not very cold. Now temperatures are cool at night but warm during the day. Seeding has started in the greenhouses. Negotiations with the farmers are beginning and prices should be set by mid-April. The forecast remains 850,000 tonnes.

Other WPTC members
In Australia, the volume expected is now around 221,000 tonnes.

In Argentina, Fair weather conditions, percentage of tonnage already harvested is 80% in this season, forecast is still 400,000 metric tonnes. Field gate price is around 74 USD per tonne with freight averaging 7.5 USD per tonne.

In Brazil, tomato season started late February and has good development. Our season will be reduced in 13 % in surface area with a total 14,140 hectares. We estimate 1.2 million tonnes processed this year. Some paste processors are having problems to sell tomato paste on the internal market and last year the yield was higher than most processors expected. Tomato price is around 78 USD per metric tonne and most of the area is already contracted

In California, on February 8th, NASS released its first estimate for the 2019 crop at 12.1 million short tons (10.97 metric tonnes) on 235,000 acres (95,100 hectares). Plantings are under way in the Southern growing areas and close to schedule. Continued rain has delayed plantings in the Northern growing area at this time.

In Canada, it is still a bit early to have a good estimate. Volumes are expected to be similar to last year or possibly very slightly less, but no contracts have yet been issued. Planting won’t start for probably another 6 weeks or so, so it is still a little early to predict conditions, but the first signs of Spring arrived this week.

In Chile, the weather still dry and warm, with good yields and quality. As of today approximately 70% has already been harvested and the season will finish at the end of April.

In China the forecast remains 4.5 million tonnes. Conditions to date are normal.

In Peru, the 2018/19 harvest finished in February with 100,000 tonnes processed. The same volume is planned for next season

In South Africa, the expected total tonnes for this season is approximately 161 000 tonnes. The summer production part of 40 000 tonnes is on schedule till end April. The winter production season is due for 121 000 tonnes and the yields are according to forecast and the season ends mid-September.

Other countries
In the USA Midwest, production should be around 422,000 metric tonnes (465,000 short tons) with prices up a couple dollars (prices vary depending on destination and quality but are on average about 120 USD per short ton). 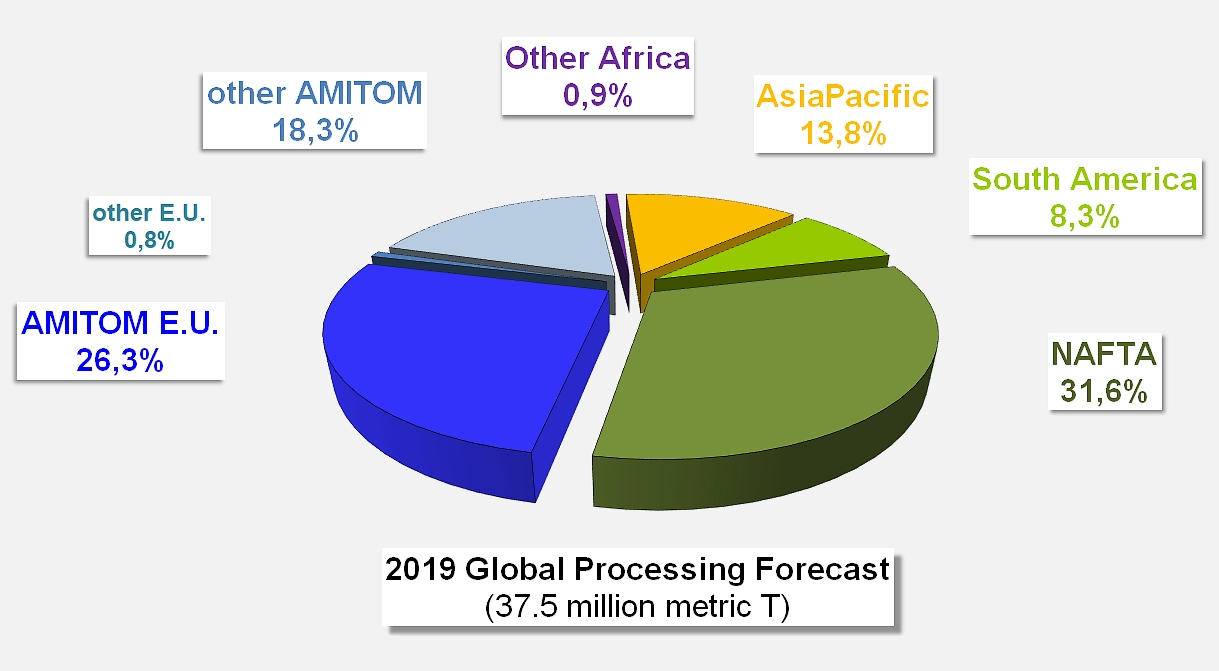