The harvest data collection carried out by the WPTC on August 21 did not bring any noticeable change in the 2020 processing forecasts. Barring an unforeseen event, global activity is expected to be around 39.2 million metric tons this year.

AMITOM countries
In Egypt, after the break for the Islamic holidays, the harvesting of the summer crop in the northern region is now in full swing and all factories in the region are running at capacity. Farm yields are about 30-35 t/acre (74 to 86 t/ha) and fruit quality is good, with a good brix and colour. The summer season will continue until the end of September and then the early winter season will start. The forecast remains unchanged.

In France, all factories are now opened and 34,000 tonnes have been processed to date (22% of total), only 1,000 tonnes of which in the south west. This week and next week a part of the production will be organic. In the south east, yields are better than expected with up to 130 t/ha in the Camargue, with big fruits and a very good quality, an average brix of 5.3-5.4 (a bit lower in the last week). In the south west it is too early to really estimate yields. 1% of the surface has been affected by hail. The weather is currently good. A large proportion of the crop will be processed in September and until mid to 20 October. The forecast remains unchanged.

In Greece, the weather has been good during the last two weeks, despite some rains which did not cause any damage. Quality is good with average brix over 4.9 and yields over 95 t/ha. All factories are now at full capacity. Already 65% of the plan has been achieved in the south, and 33% overall with a total of 145,000 tonnes already processed. The total forecast remains 440,000 tonnes.

In Hungary, harvesting started on 12 August, and now 12 % of the crop has been processed. Brix was good at the beginning but in the last 4 days slight rains hampered the work a bit. The maximum daily production will be reached on 24 August if weather conditions are optimal. We can still maintain the previous total estimate of 95,000 tonnes.

In the North of Italy, as of 9 August, 700,000 tonnes had been delivered, which is 24% of the contracted volume, with an average brix of 5° and good colour. It is estimated that as of today 35-40% of the volume has been delivered but factory yield is poor especially for diced as tomatoes are very soft.
In the South of Italy, the volume to date is in line with a normal year. The field yield is very good but the processing yield for canning and dice is very low as tomatoes are soft so passata production is increased. Otherwise tomato quality is good with nice colour and good brix. There was a lot of rain and storms last week in North of Puglia but only 50 hectares were flooded and a total of 200 hectares were damaged.
The forecast in both regions remains unchanged.

In Portugal, there is not much change from two weeks ago. The weather has been strange and unstable, with cool temperatures, but now getting better. Quality is generally very good with good colour and high brix, but field yields are still very poor. As of 15 August, only about 20- 22% of the forecast has been processed. Currently, factories are only running at 1/3rd to 2/3rd of their capacity as there is a gap in the harvest due to the rains during planting. Larger volume will arrive from next week. A large proportion of the crop will be harvested in September. The forecast remains 1.3 million tonnes for the time being, until there is enough data to revise the expectations. 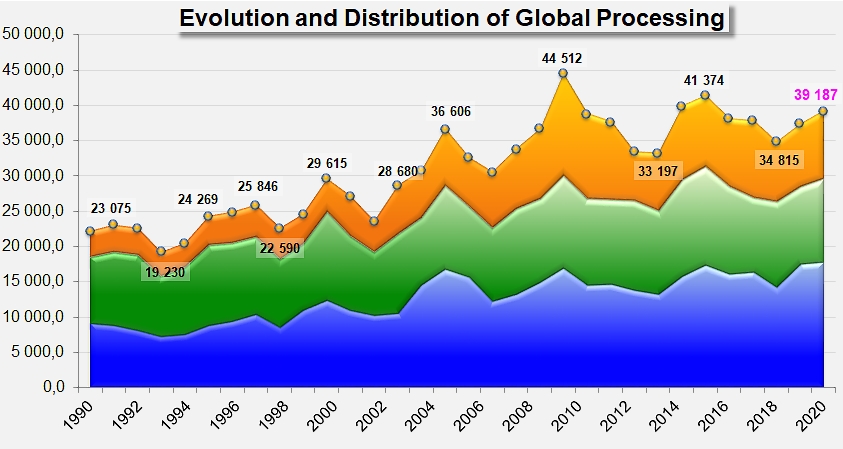 In Russia, processing only started last week with small volumes so factories had to start and stop, but harvest is now picking up speed. Yields and quantities are reasonable, with 80 t/ha and an average brix at 4.6°. Due to the late start, harvest will continue until the first week in October. The forecast remains at the already lowered volume of 530,000 tonnes.

In Spain, as of 15 August, 29% of the total crop has been harvested. In Andalusia, 51% of the harvest has already been done and factories have been running at capacity for several weeks.
In Extremadura, only 25% of the forecast has been achieved as the harvest so far has been slow as yields have not been good this year to date. Full capacity was only achieved this week. A hailstorm on 11 August has caused some limited damages and the rain disrupted the harvest in limited places. Temperatures are now back to normal after a very hot few weeks and the weather forecast is good. Fruit quality is very good with higher brix than normal and good colour, so good for dice production.
The forecast for Spain is lowered to 2.9 million tonnes with still a lot of uncertainty, especially in Extremadura and the need of a good weather in September.

In Tunisia, the tomato processing forecast is maintained at 900,000 tonnes, of which 850,000 tonnes are for 28/30 paste and 50,000 tonnes for canning. Compared to previous seasons, in 2020 we recorded an early harvest and processing of industrial tomatoes (advance of 7 to 10 days). Currently, processing is continuing in 6 factories supplied from the northern regions. Up to 17 August, nearly 840,000 tonnes of tomatoes have been processed.

In Turkey, all factories are running at full capacity, the quality is good at the moment. Due to an overlap of south and north there is a surplus of raw material at the moment which will carry on for a while. Similar to others, we are expecting the crop to run late. The weather is fine and forecast clear until the end of the month.

In Ukraine, the harvest started on 12 August and full capacity is expected by the end of the week.

Other countries
In California, the estimate is to process 1,020,428 short tons (925,630 metric tonnes) this week. At the end of this week (week ending 15 August) we will have processed 5,063,430 short tons (4,593,037 metric tonnes). Overall the state experienced extremely high temperatures over the last 7 days. In addition, the valley is covered with extensive smoke due to the many fires in California. There is a concern about the impact of the heat on the crop. Yields in the south continue to perform below contracted levels and solids continue to be doing well. In the Northern part of the state, overall yields are at contract at this time. There is some concern about the acceleration of the crop.

In Canada, the harvest is underway with most processing facilities having just started. Some regions received rain over the past weekend which will help the mid and late crop. Overall quality is reported to be good.

In Japan, the total amount of harvest may decrease to about 30,000 tonnes due to long rain and the lack of sunlight in July. 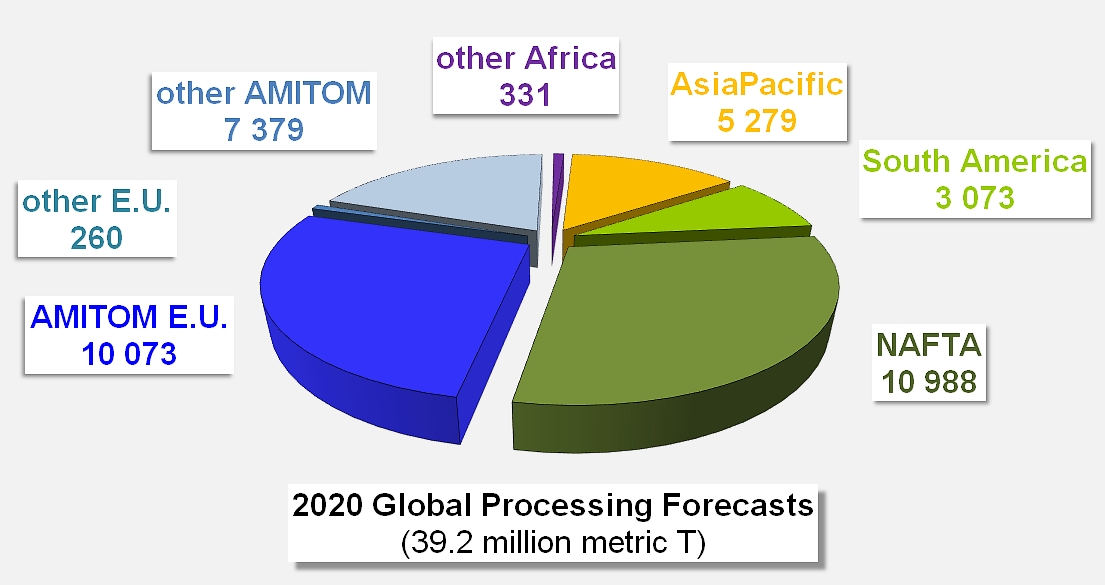