WPTC: Crop update as of 14 September

AMITOM countries of the EU
Portugal
As of mid-September, the season is progressing satisfactorily and all the plants are processing at full capacity. Weather conditions are favorable, with daytime temperatures between 30 and 35°C and night-time temperatures of about 20°C, and there has been no rain despite forecasts (some rain is expected for week 38 (16-22 September)). Quality is good, particularly in terms of Brix (currently 5.3 on average).
At the end of week 36 (2-8 September), only half of the expected volume had been processed and operators estimated that another three-and-a-half weeks would be necessary to reach the target of 1.1 million tonnes, knowing that no more than 50 000 to 70 000 metric tonnes (mT) would be processed during the first week of October.

Spain
From mid-August to early September, large volumes of fruit arrived at full maturity within a short space of time, but this period is now over. The harvest has benefited from good conditions in Extremadura and Andalusia where respectively 65% and 75% of the planned volumes have already been processed. Plants are expected to stay open until the end of September, possibly even into the first week of October. If the harvest is not affected by rain (like in Portugal, where recent forecasts of rain did not come true, but where rain has nonetheless been announced for the beginning of week 38), total volumes could reach 2.7 million mT, slightly up from the 2.6 million mT previously announced.

Italy
North- According to the figures supplied by the Pomodoro IO, a total of 1.85 million tonnes had been processed as of 2 September, with an average Brix of 4.85. Some growers finished the harvest last week (week 36, 2-8 September). Quality has remained generally good, although volume and Brix values (4.65 on average) of the crop were affected by one episode of rain. Weather conditions for week 37 (9-15 September) have been satisfactory, with low temperatures at nights and adequate temperatures during the day. The industry estimates that processed volumes reached 2.05 to 2.10 million mT on 9 September (which is 90% of forecast volumes), while approximately 10% of the surfaces remain to be harvested. As of 14 September, a number of factories had already ceased operating, with the last ones expecting to shut down during week 38, around 21 September. Mostly because of low agricultural yields and a drop in soluble solids content at the end of the season, processing forecasts for northern Italy have been downscaled and are now stated at 2.35-2.40 million mT.
South- At the end of August, 67% of surfaces had been harvested, with 8 500 hectares remaining. As of 1 September, local operators estimate that 1.64 million mT have already been processed. Forecasts for average yields have been revised downward to 75 mT/ha, so total volume should amount to approximately 2.2 million mT, which is about 100 000 tonnes less than previous estimations. The 2018 season has been "the worst crop for the past 10 years" and a number of processors have accepted requests that prices be increased, due to the hike in crop costs that growers have been facing.

Greece
The harvest season is ending and factories in the South of the country have stopped receiving shipments. In the central region, most plants will shut down next week (week 38 (16-22 September)), with one single plant remaining open until the end of the month. As of 14 September, processors estimate that 94% of the expected volumes have been processed (a total of 320 000 mT). Weather conditions have been good and quality is generally considered satisfactory, despite a Brix that is just average.

Hungary
As of 14 September, the harvest was still ongoing and 94 000 mT have been processed (85% of forecasts), grown on 1 350 hectares. The season has only seen a few short episodes of rain, but early ripening has led to prolonged periods in the fields for early ripening fruit, which has negatively affected quality. Production forecasts have been downscaled: Univer, the biggest Hungarian operator, is expected to process only 98 000 mT out of the 105 000 mT announced, while Golden Pheasant, the country's second biggest operator, is expecting to process only 12 000 mT of the 20 000 mT programmed. So total volumes in Hungary have been downscaled to 110 000 mT instead of the 120 000 mT previously announced. 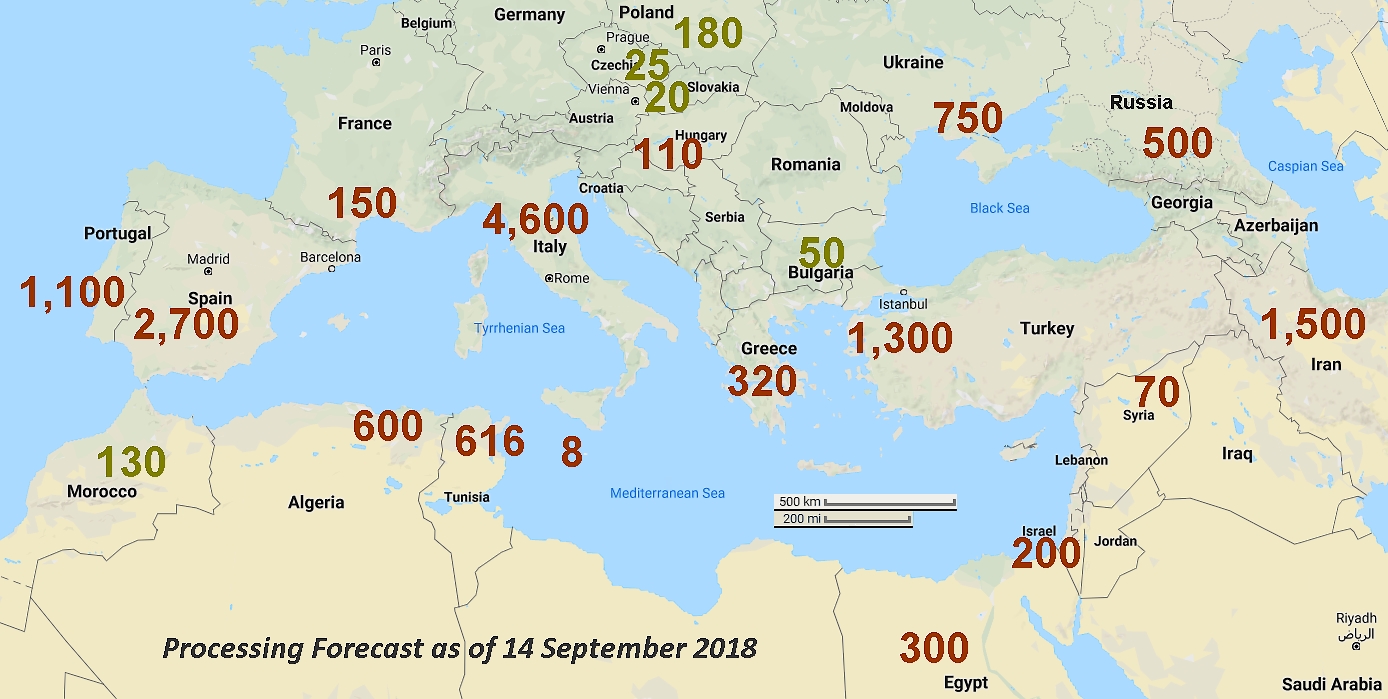 Processing forecasts as of 14 September in Mediterranean countries
(AMITOM countries in red, non-AMITOM countries in green)
AMITOM countries outside of the EU
Tunisia
As of 10 September 2018, 616 000 mT had been processed, of which 601 000 mT dedicated to paste production and 15 000 mT to the production of canned tomatoes. The season is now over in all regions and this result, which will be confirmed once all of the industrial data has been consolidated, generously exceeds (+8%) production forecasts of 570 000 mT.

In Turkey, the gross volume delivered is estimated at between 1.3 and 1.4 million tonnes but it is impossible to make deductions for poor quality and MOTs.

As of 14 September, processing forecasts for AMITOM countries overall amounted to 14.824 million tonnes, a drop of 1.75 million mT (-10.5%) compared to results from the 2017 season. If these results are correct, these latest estimations also mean that the AMITOM will process 1.92 million mT (-11.4%) less this year than the average of the past three seasons (2015, 2016 and 2017). Overall production throughout the Mediterranean region is therefore expected to have decreased by the equivalent of about 300 000 tonnes of 28/30 Brix paste.
Four countries – the leading processing tomato producers of the Mediterranean region – have very largely contributed to this slowdown in business: by comparison with the 2017 season, processed volumes have dropped 600 000 mT in Italy, 650 000 mT in Spain, 600 000 mT in Turkey and 454 000 mT in Portugal. On the other hand, volumes have notably increased in Russia, Iran and Ukraine, but the increases in quantities involved are in no way sufficient to compensate for decreases elsewhere and as yet only marginally affect the international markets.
As things stand, the volumes processed within AMITOM countries amount to slightly less than 43% of worldwide operations.

Other WPTC countries
In California, the estimate is to process 1,114,936 short tons (1,010,603 metric tonnes) during week 37. At the end of this week (15 September), the industry will have processed approximately 9,810,066 short tons (8,899,482 metric tonnes). Current field yields are lower than at the beginning of the season but overall are still doing relatively well. The overall quality of the crop continues to be good and the total estimate remains the same at 11.8 million short tons (10.7 million metric tonnes). Solids continue to run below historical averages state wide: year-to-date solids are at 5.09 compared to 5.30 for the same time period in the 2017 season.

In Canada, colour, quality and solids all reporting to be good to excellent across 6 processors who are on target with 49% harvested to date.

Other countries
The US Midwest received heavy rains over the weekend disrupting processing for a few days. The fruit remains in good shape and picking will start again in all areas by the end of the week. Yields remain strong and quality is good as we were caught up on maturities going into the rain period.

In Poland, the forecast remains unchanged at 180,000 tonnes. 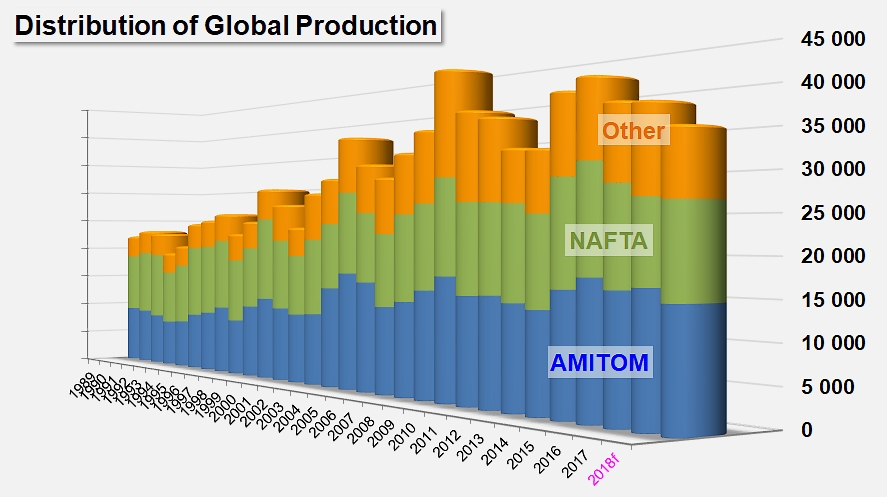 In the current state of estimations, total volumes processed during the ongoing season are not expected to exceed 34.78 million mT, which is 2.3 million mT (-6.3%) less than initial forecasts in February, but more importantly 3 million mT (-8%) less than in 2017. For the moment, processing forecasts are 10% lower than final results in 2017 for the countries of the AMITOM as a whole, while they are 12% higher for countries of NAFTA and a full 24% below previous results for the rest of the world overall.