15/06/2020 - WPTC - 2020 Season
As of 12 June, the global processing forecast for the 2020 season show a slight decrease (200,000 metric tonnes or -0.5%) compared to the previous reports. The current expectation is just below 39 million tonnes (around 38.96 million tonnes), down from the 39.4 million tonnes first estimate in January. Adverse climatic conditions, particularly in the Mediterranean basin, do not seem to have significantly affected production programmes.

For the time being, the prospects for marketing year 2020/2021 are 1.5 million (4.5%) higher than for 2019/2020; if achieved, these quantities allow the global industry to cope with immediate consumption but also contribute to the replenishment of stocks which were, for some product categories, eroded by the heightened demand due to the Covid-19 crisis. 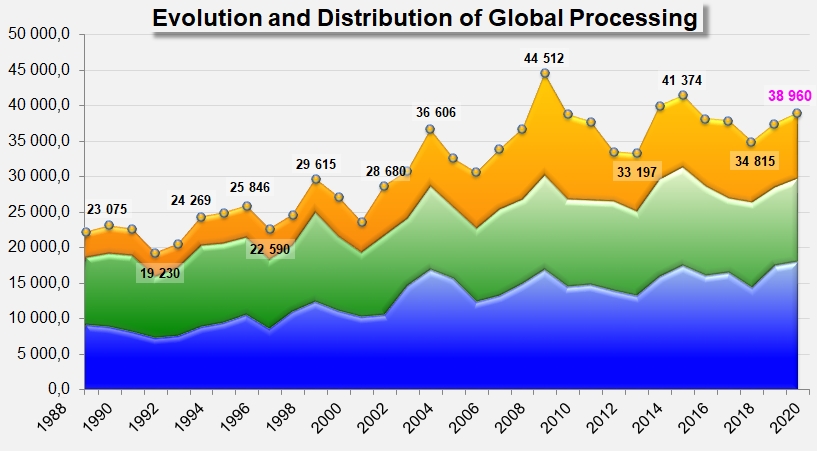 In Egypt, harvesting of spring tomatoes (early summer season) returned to normal after Eid El-Fitr and supplied quantities are increasing. Quality is very promising with Brix as expected over 4.9, and weather is suitable for tomatoes to ripen quickly.

In France, planting finished this week in the south-east and should end next week in the south-west where wet conditions over the last two weeks have disrupted operations. The total surface planted should be 2150 hectares (2220 ha in 2019) with 360 hectares of organic tomatoes (370 ha in 2019). A total volume of 155,000 tonnes is expected. Small areas were flooded or hit by hail, but damage is very limited, but there are worries that the wet conditions could lead to the development of blight and bacteriosis. The harvest could start a few days earlier than usual. The average price is estimated at 78 €/t (mostly between75 and 80 €/t).

In Greece, transplanting has been finished for a while now. Since then, there has been some rains but no significant damage. Harvest will be longer than most years, to finish at the end of September, except in the south, with a lower peak than usual in August. Price is increased by about 3 to 4 % to an average estimated at 88 €/t delivered but with differences depending on products and location.

In the North of Italy, transplanting finished at the end of last week (week 23). It rained a lot and there was some hail last weekend and this week but there should not be any damage to fields. The early fields are now in blossom and harvest should start around 20-25 July. The forecast remains unchanged at 2.55 million tonnes. The price was agreed early in February at 88 €/tonne ex-field.
In the South of Italy, price negotiations are currently stopped following an offer of a 2-euro increase by ANICAV but growers want a large increase of about 20%. The agreement between growers and PRINCES which was presented in Tomato News in fact hides many strict conditions as the base price is 102 euros with extras for productions for specific zones, before 15 September, following blockchain Global Gap guidelines…. A first indication of the surfaces planted will be available next week (week 25), but the exact acreage will be known in July with the aerial survey. Surfaces will in all likelihood be up and planted fields are currently looking very good and expected yields high.
The total forecast for Italy is maintained at 5 million tonnes. The HORECA market has suffered a lot from three months of closure and its starting back slowly.

In Portugal, the spring was very wet, and planting was very late and only finished last week. Most of the surface was planted and confirmation of the total surface is pending. Early plantings are affected by a lot of disease problems, but later planting look in good condition. The forecast is reduced to 1.3 million tonnes for now but may decrease further. Tomato price is unchanged from last year and varies between locations and processors but range from 76-77 €/t to 80-81 €/t for 5-5.3 brix with an extensive brix scale. 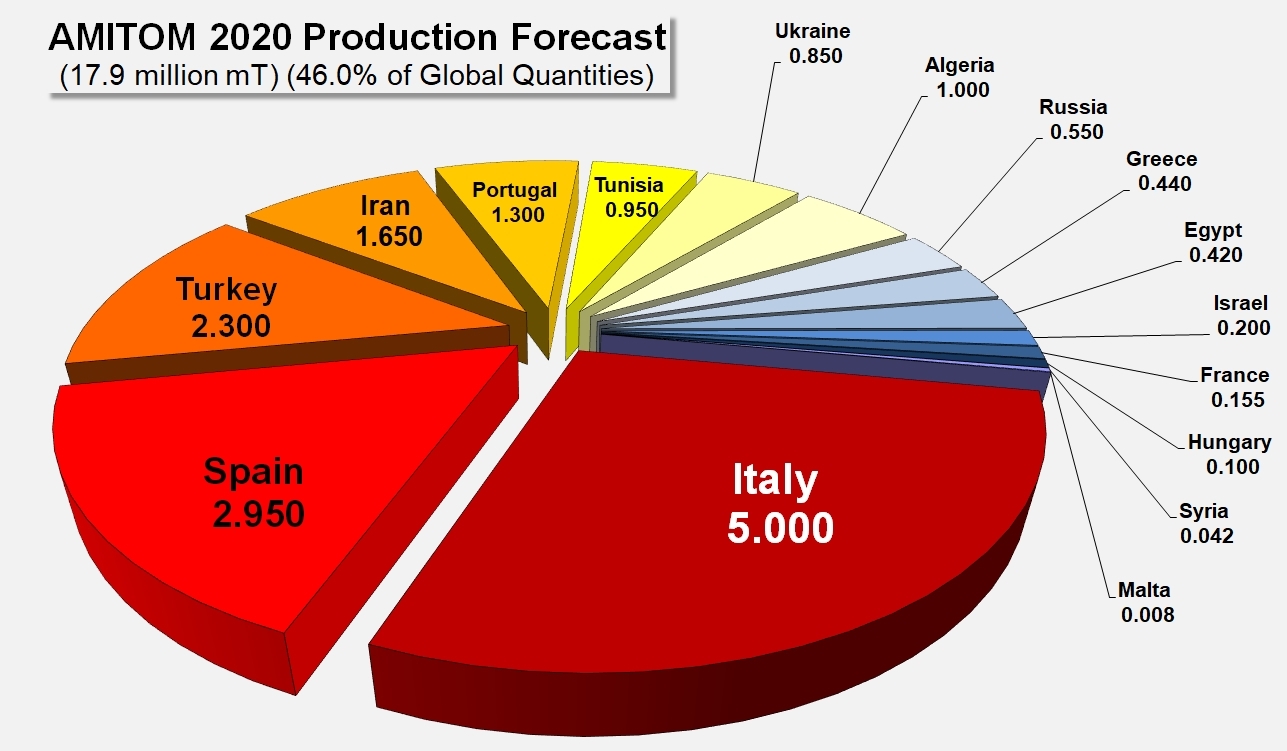 In Russia the weather is now good and hot after a wet May and planting has just finished. The forecast remains 550,000 tonnes. It is difficult to have an average price as a lot of the volume is produced internally but the average is about 65-70 €/t.

In the Andalusia region in Spain, heavy rains during the second week of May heavily affected the early fields with blight and bacteria and at least 200 hectares have been lost with lower yields expected in early fields.
Planting in Extremadura finished 10 to 12 days later than usual and about 3% of the surface planned was not planted due to either a lack of plants or farmers not wanting to take the risk. The early plantings were also affected by rains in May, with some disease development but less prevalent than in Andalusia
The weather is now good and dry, but more than half of the normal annual rainfall was recorded in the spring this year. Consequently, the forecast for Spain is revised from 3.1 million tonnes to 2.95 million tonnes with a large proportion of the crop expected in the second half of September and first week in October. Prices are similar to last year at about 70 €/t ex field, 76-77 €/tonnes delivered.

In Tunisia the planted area is 16,500 hectares for an estimate of 950,000 tonnes of tomatoes produced for processing, of which 900,000 tonnes are intended for the production of tomato paste and 50,000 tonnes for the production of canned tomatoes. Until the first week of June, climatic conditions were favourable for the vegetative development of tomato plants and fruits, although local hailstorms affected some areas of the central region during the last week but did not cause significant damage to the tomato fields. Processing is scheduled to start during the first week of July 2020 in 26 factories.

In Turkey after rainy weather paused planting for a while, planting is finishing this week and weather conditions are now good, with some showers forecast for the next week. There is no change to the forecast which remains at 2.3 million tonnes. Processors are keen to process at full capacity this year as there is a strong demand. Contract price is similar to last year at 550 - 570 TRL/t (71-74 €/t) but a large proportion of the crop will be bought on the open market where price should not drop as much as last year (some volumes bought at 480 TRL last year).

In Ukraine all tomatoes are now in the fields. The wet and cold weather in May did not affect planting but favoured the development of diseases and pests which appeared earlier than usual and the cold (night especially) delayed plant development some the early crop will be late. Some hail at the end of May affected some fields which hopefully will recover. The weather is now normal with about 30°C during the days and 20 °C at night. The forecast is confirmed at 850,000 tonnes with prices of about 86 €/t delivered. 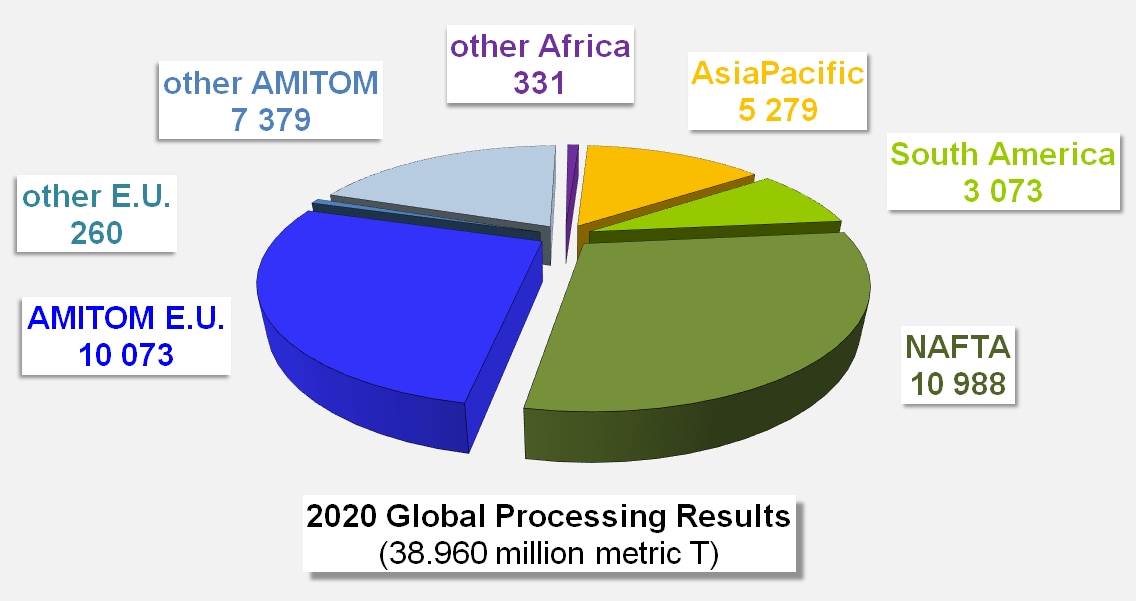 In California, the USDA/NASS released the latest crop estimate on May 28th, at 235,000 acres that will produce 12 million short tons (10.886 million metric tonnes). While there have been some changes due to Covid-19, this estimate comes directly from the processors on what they have or will have contracts for in 2020. Harvest should begin in volume after the 4th of July. The overall crop looks good at this point but is showing some slight impacts from the inconsistent weather patterns over the growing season. This is something that will continue to be monitored as crop development progresses. Price negotiations are still ongoing.

In China, transplanting has now ended, and the weather is normal. According to the current growth trend of raw materials and the estimated planting area in the early stage, the estimated total planting area is maintained at 5-5.5 million tonnes. However, the weather is abnormal this year and the forecast will be updated later based on actual conditions: after more rain fall than usual in August to October last year, there has been a drought since January 2020, with less rainfall than the same period in previous years.
In 2019, average prices were RMB400-430 (51-55 €/t) and the forecast average for 2020 is RMB420-450 (52-56 €/t).

In Japan, the estimate has not been changed from the last report with the total volume of tomatoes to be processed of 32,000 tonnes from an expected surface (to be) planted of 450 ha. The surfaces planted will be fixed at the end of June.

In the US Midwest, The US Midwest is set to finish planting later this week and first of next week. After a tough start due to freezing temperatures and another frost after that, planting was spotty due to rains, but the last two weeks has seen improved conditions. There were slight acreage cuts due to the delays, but the crop looks like it is off to a good start, just late. Prices are dependent upon destination, freight payments, adjustments based on input costs and quality grades, so very variable but should remain close to 2019 when the average was approximately 120 USD per short ton (116 €/metric tonne).

In Argentina, the final volume processed was 454,000 tonnes from 6,100 hectares. The average yield was 74 t/ha but it was particularly good in the San Juan region at 90 t/ha. Average price of tomatoes was 5400 AR$/t (71 €/t, 75 USD/t). The main problems encountered during the season were irrigation management, weeds, and a few hailstorms. The idea for next season is to increase acreage if snow in winter is available.

In Australia, the total volume processed was 210,477 tonnes. 96.6% of the surfaces planted were harvested with a yield from harvested hectares of 105.1 t/ha. The season was characterized by a cool November, with below average nighttime temps through this month which contributed to a delay in the commencement of harvest. The growing season was quite dry, so low disease and insect pressure. The harvest commenced 17 days later than planned and was completed on 15th May after a production downtime of 18 days due to rain events mainly in April and May. Yields were strong in the front half of the delivery window, most above budget. Potential was there for the backend crops however, rain delay at end of March, early April, saw yield quickly erode

In Brazil, the current travel restrictions make it difficult to travel to collect information, so the previous estimate is maintained (1.05 million tonnes). 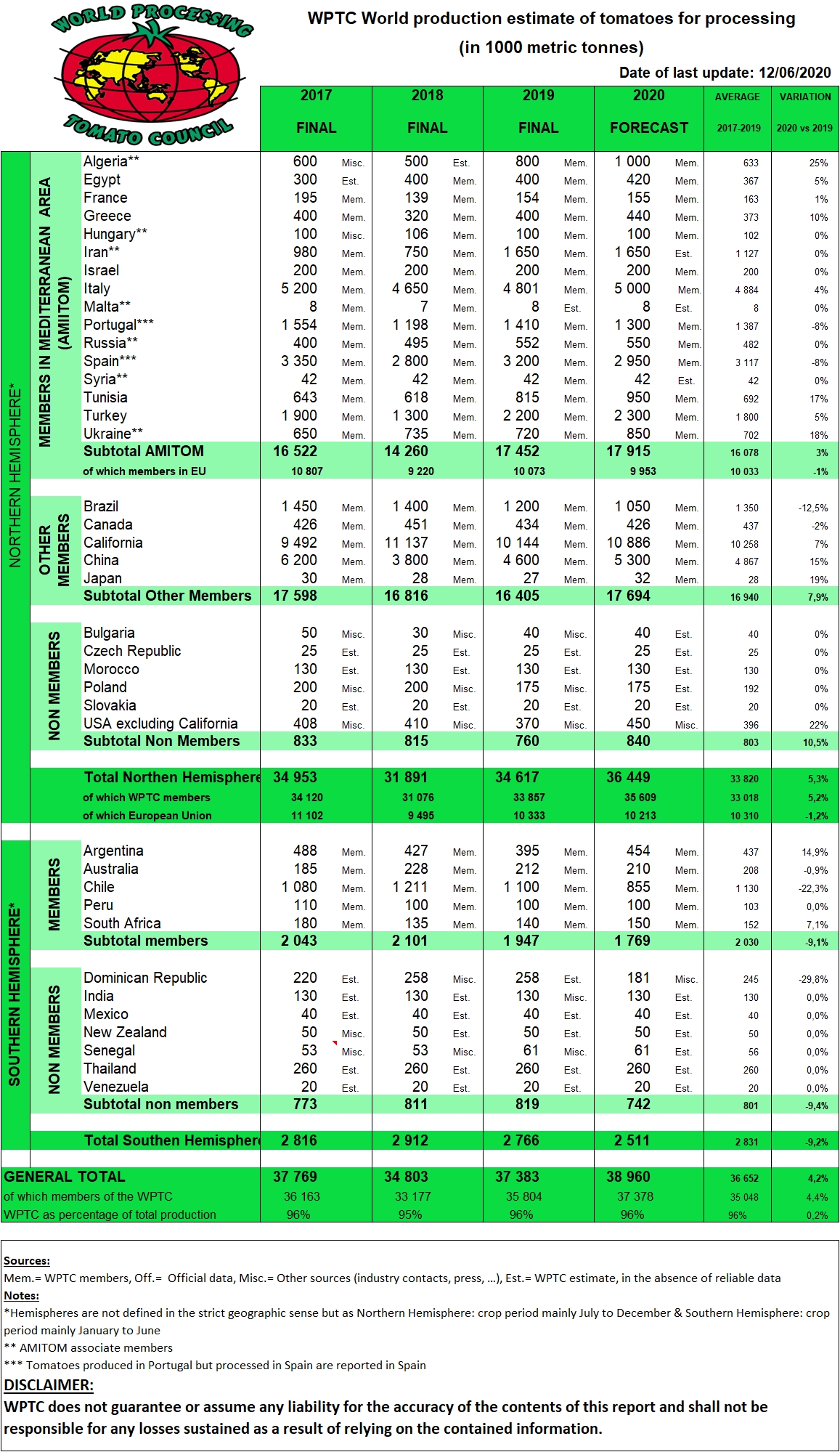 South-central Italy: A growing gap between the different price proposals