13/03/2020 - WPTC , François-Xavier Branthôme - 2020 Season - Lire en français
With a forecast of 39.3 million metric tonnes as of 11 March 2020, the WPTC forecasts a slight increase in global processing intentions for the 2020 season. The increase would represent a little less than 2 million tonnes (+ 5%) compared to the 37.8 million tonnes final volume recorded for 2019. The increase is distributed almost uniformly between the three major global processing regions (the Mediterranean area, North America and China) which each increase their forecast by between 700,000 and 750,000 tonnes. 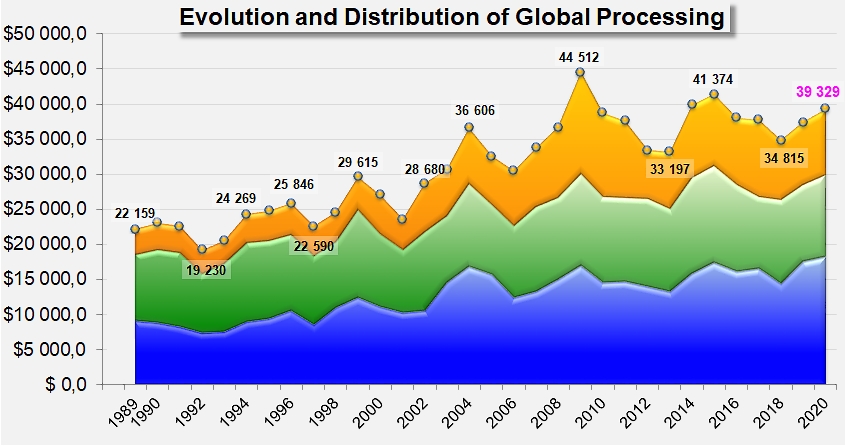 Southern Hemisphere countries
In Argentina, the harvest started in November in NOA Provinces and will finish in May in San Juan. Price in contracts is 75 USD/t field gate. Due to dry weather conditions and technology total volume in the country is increasing, now forecast is around 480,000 tonnes from 6,100 ha. Brix and fruit quality are good.

In Australia, it is currently expected that 219,600 tonnes will be processed this season from 1972.4 hectares (average yield 111.3t/ha). The harvest began on 13 February (14 days later than expected), and is expected to end on 20 April. 60,000 tonnes have been processed to date. The season so far has been characterised by a cold start and unrelenting wind. December and January brought extreme temperatures, but early crops seem okay. Fruit quality is currently very good, although some growers are experiencing reduced fruit numbers and size. Another low-rainfall season brought high prices for irrigation water; however, all grower water secured. One recent rain event held up harvest for 4 days, but we are optimistic about the rest of the season.

In Chile, there is no big change expected from the last report. The season has an advance somewhat greater than 55%, with good quality of raw material, and without any problem of rains. Some fields have been affected by drought, but others maintain good yields, which compensates for the above. Dry and hot weather conditions, with water restrictions in specific areas. The harvest should finish approximately during the third week of April. The total volume expected remains 855,000 tonnes, from a surface planted of 9,500 hectares with a yield forecast of 90 t/ha. Contract prices is not available until the end of the season. After a record export season, the stocks of final product are low. 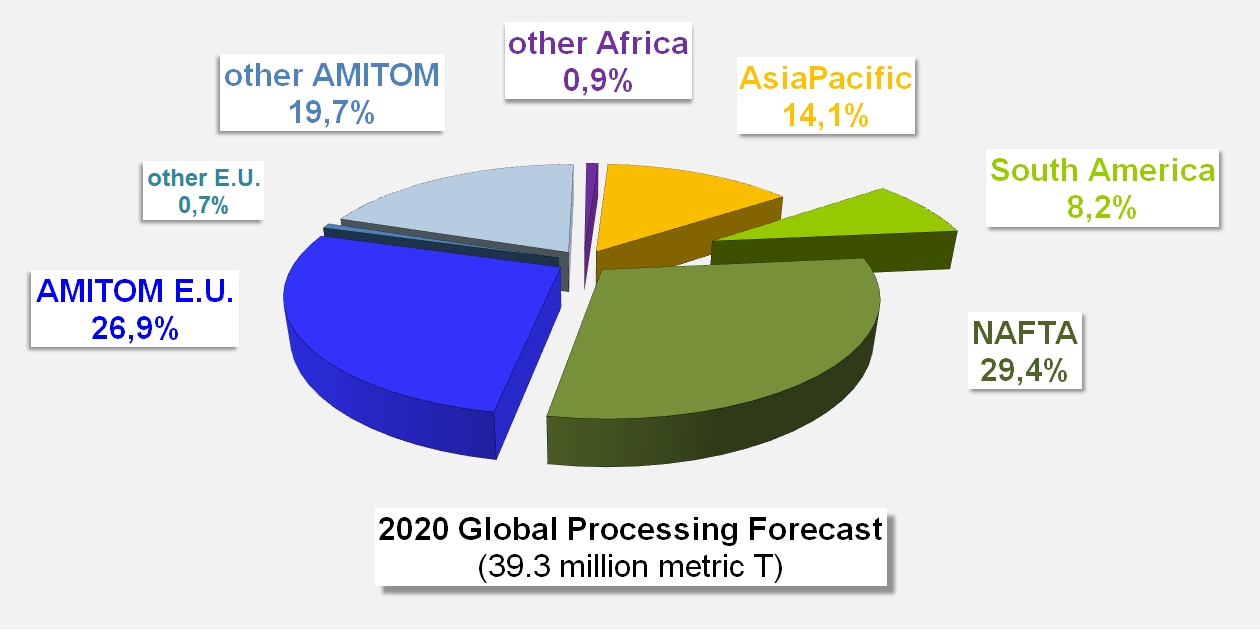 AMITOM countries
In France, the forecast will only be known after the interprofessional organization meeting on 16 March but is expected to be around 160,000 tonnes.

In Greece, as expected, the surfaces planted will increase by 10 to 12% so the early forecast of 440,000 tonnes is confirmed.

In the North of Italy, processors are currently signing contracts with the POs. The price is 88 euros/tonnes ex field with a new system of penalties in order to limit the hectares planted. Penalties applied if the total surface planted by POs is over 32,080 hectares or the contracted volumes exceeds 2,475,000 tonnes will go to a special fund for industry initiatives (quality programs, promotion, etc.). The "soluble solids" reference level for payment is to be shifted from 4.95 to 4.90 Brix degrees, closer to the real level. The contracted volume have to be declared by 16 March. The forecast for 2020 crop is confirmed at 2.55 million tonnes. After a very wet fall from mid-October to mid-December, the winter was very dry thereafter which made water availability a concern. There is now less concern following some rain last week and hope than more will come in the next few weeks.
In the South of Italy, the price negotiations are late and some meetings are cancelled due to the situation with the virus. Transplanting will start at the end of March/early April. The winter was dry and dams are quite empty but the situation could still change like it did last year when the spring was very wet. The volume expected is between 2.45 and 2.55 million tonnes with 28,000 to 30,000 hectares to be planted.
The total forecast for Italy is therefore 5 to 5.05 million tonnes.

In Portugal, the early estimate of 1.4 million tonnes is confirmed. The situation is normal in the fields with warm weather at the moment. No problems of water availability are foreseen at the moment.

In Spain, the surfaces planted this year will increase by 1% but it includes a 7% reduction in Andalusia and a 4% increase in Extremadura. In Andalusia, there is a serious concern over water availability as January and February have been very dry. The water allocation announced last week is lower than expected which could mean that not all the surfaces expected will be planted. Transplanting started yesterday.
In Extremadura, the dry weather enabled good field preparation but water availability is not an issue here. Planting will start at the end of the month.
The total forecast for Spain is increased to 3.1 million tonnes.
A new regulation is planned on a minimum price to be paid to growers but would not be implemented this year and it will be difficult to calculate as costs are very variable between farmers. 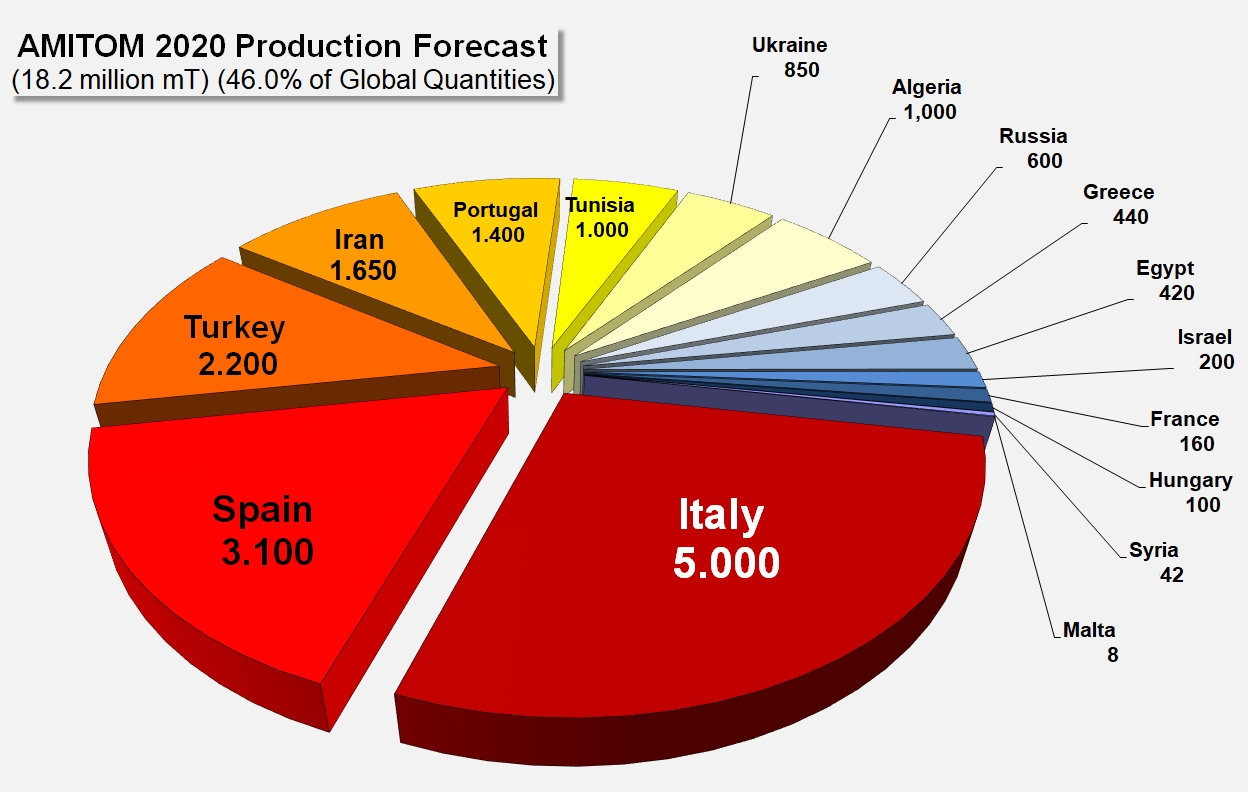 In Tunisia, the surface area for growing seasonal tomatoes is 17,000 hectares, with an estimated production of tomatoes for the industry of 1 million tonnes. Transplanting of tomato plants began in the last week of February 2020 in the regions of Gafsa, Kairouan and Nabeul. The areas planted until 7 March reached almost 4,000 hectares. Current climatic conditions are favourable for transplanting.

In Turkey, the forecast remains 2.2 million tonnes. Here also the winter was mild and dry but there is no issue with water availability. Farmers are keen to plant and processors to process similar volumes to last year but the current political situation with the refugees crisis and now the virus make the exchange rate and thus exports uncertain.

In Ukraine, it was the warmest and driest winter in the south of the country for 10 years. Soil is extremely dry now. Since last October, a level of rainfall is close to historical average. State agency for water resources reported an extremely low level of water in rivers all over Ukraine for the first time ever. Thus, we believe that most insects wintered without any problems.
Sowing should start within 2 weeks in greenhouses and field preparation scheduled for this period of the time is in progress. We expect the same, or close to it, acreage of tomatoes this year and prices for tomatoes delivered to the factory should be in a range of 78 – 90 euro/t (depending on the quality and specific requirements of the processor).
Forecast equals last season intentions and stands at 850,000 tonnes of tomatoes to be processed.

In Russia, the plan is currently for 600,000 tonnes to be processed this year. This include additional volume forma new factory currently being built in Astrakhan so the volume could be slightly lower if the build finishes late.

Other Northern Hemisphere countries
In California, the latest NASS/USDA estimate is for 12 million short tons (10,886,200 metric tonnes) on 235,000 acres (95,100 hectares). We have had a very dry January and February which has resulted in lower than expected initial water allocations. We have started transplanting in the field with growers having to do more pre-irrigation than normal during the process. Due to dry weather planting is on time and in some isolated cases a few days early.

In China, 2020's demand is expected to increase by about 100,000 MU (6666 hectares) and about 0.7 million metric tons of raw materials. Surfaces (to be) planted and expected yield: 700,000 MU (46666 hectares) has been implemented, and the final planting area is uncertain.4.5 million tons of raw materials that have been implemented so far, and the total estimated raw materials is 5-5.5 million tonnes. The epidemic situation has an impact on the tomato industry, seedling work are slightly delayed. However, the planting area has increased, and the raw material production is expected to increase.

In Japan, the 2020 crop estimate is for total volume of tomatoes to be processed of 32,000 tonnes from an expected surfaces (to be) planted of 450 hectares. 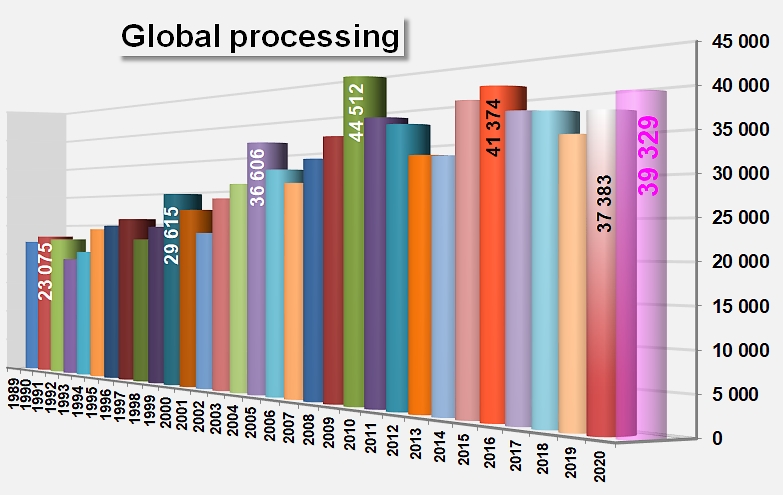 If the global projection proves to be accurate, the volume of tomatoes processed during the 2020/21 marketing year will be slightly higher than the estimated level of global consumption which was estimated at just over 38 million tonnes in 2018/19 in our latest consumption study. In view of the probable situation of extremely reduced carryover stocks at the start of the 2020 processing season, these volumes should ultimately leave only a very small amount (which can be estimated at around 1 million metric tonnes) to be devoted to the replenishment of inventory in companies.

The latest consumption study commissioned by the WPTC was due to be presented next week in San Juan and published in the Tomato News 2020 Yearbook distributed to all congress attendees. We will publish the main findings of the study and an analysis of the current situation over the next few weeks on www.tomatonews.com. 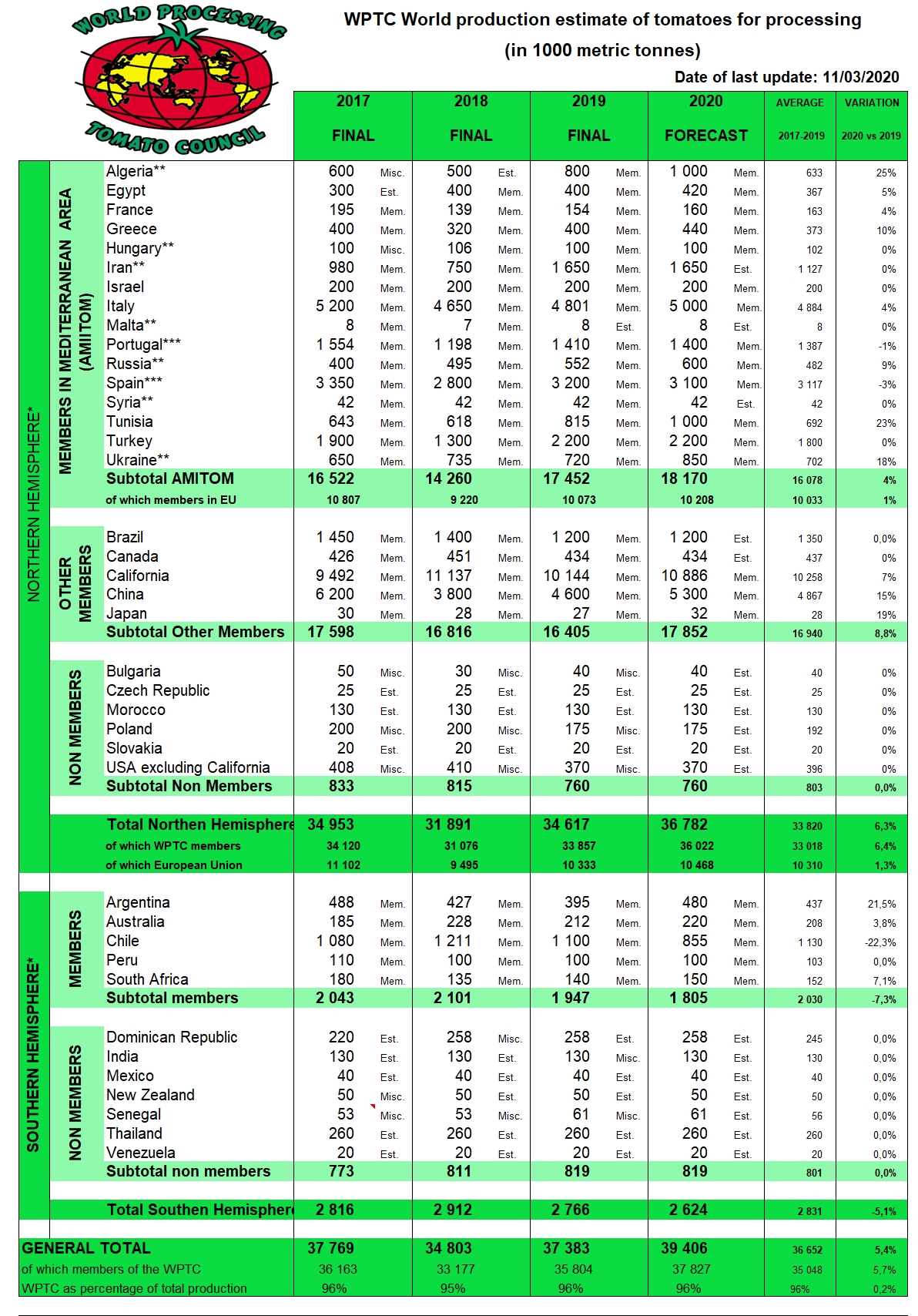