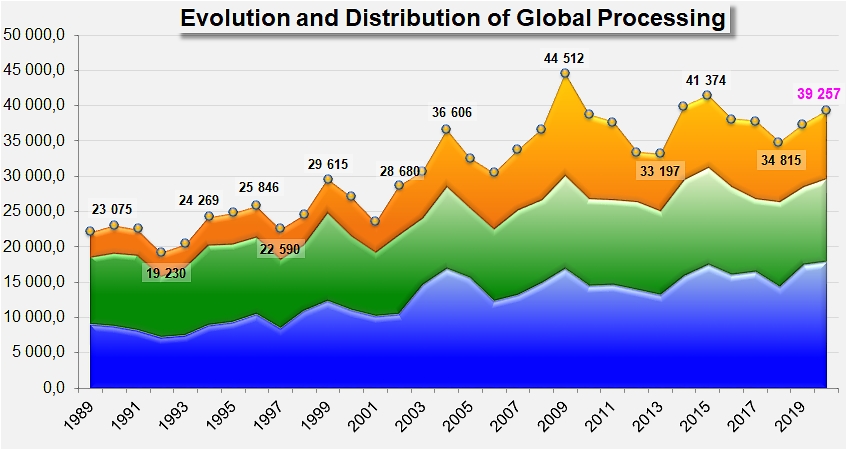 The early summer season finished last week in Egypt, and the summer season is now starting with tomatoes from the north of the country with the full capacity and all factories opening by 10 July. This season, Paste & Juice is growing 500 acres of tomatoes which will be machine harvested. The forecast for Egypt remains 420,000 tonnes.

In France, planting finished on 17 June in the South West with a total surface planted in France of 2215 hectares, of which 375 hectares of organic tomatoes. In the South Sest there is some late blight and bacteriosis due to the rainfall and some hail between mid-May and the end of June, but organic tomatoes planted are blight tolerant so without symptoms. In the South East, conditions are now normal. The harvest should start around 22-25 July in the south-east and on 5-8 August in the south west but, for the 2 sectors, with probably a period of 7 days without harvest around 2 weeks after the opening of factories. This will be due to the delay of planting in the middle of May. The forecast remains 155,000 tonnes.

Some hailstorms and heavy rains in the centre of Greece thankfully did not affect tomato fields. The temperatures are now quite hot at 36-38°C. The harvest should start around 20 July in the South and during the last week of July in the other regions. The forecast remains 440,000 tonnes.

In Hungary, June brought further difficulties with heavy rains on tomato fields (150-200 mm/month). Rains resulted in localized flooding with some surfaces being lost. So, the expectable quantity should be slightly decreased to 95,000 tonnes at this moment.

In the South of Italy, transplanting finished at the end of June and the first survey of the surfaces shows a total close to last year, with an increase in surfaces in Caserta, Lazio and south Puglia but a decrease in north Puglia due to the early lack of water for irrigation. It is hoped that yields will be higher than last year. The last offers from processors are 100 euros per tonne for round tomatoes and 110 euros/tonne for long tomatoes, +5% on 2019 and the highest price in the world. Contracts are being signed at the moment.
In the North of Italy, the forecast is unchanged for now at 2.55 million tonnes but the final surfaces will be available in a few days. Heavy rains during the first three weeks of June have favoured the development of diseases and notably Alternaria.
The total forecast for Italy remains 5 million tonnes.

In Portugal, planting only finished on 10-12 June following a long period of operations which was marked by delays and a total interruption for two weeks in April due to rain. Some fields are heavily affected by bacterial diseases. The weather is now better (26°C during the day) but windy and cold at night. The harvest should start with small volumes at the end of July but mainly in early August and will probably be split in two with the second half of the crop expected to be better than the first half which was affected by the rains. The forecast is kept at 1.3 million tonnes for now but may be reduced.

In Russia, the weather conditions were bad in late April - early May with low temperatures and a lot of rains that caused 1-2 weeks delay in planting. Transplanting was not done in the best conditions, but delay could be recovered if the weather conditions are good from now on. At the moment the weather is good. The total surface planted is around 6,800 ha and 550,000 tonnes of tomatoes should be processed in Russia during this season.

The situation in Spain has not changed significantly since our last report. The figures provided by the Mesa del Tomate confirm a reduction in the area in Extremadura by 4%. Crops develop normally with early Andalusian tomatoes significantly affected by blight. Temperatures are quite high in Andalusia and Extremadura but this is normal at this time of the year. The harvest should start from July 6 in Andalusia, with small quantities during the first week, and from the first week of August in Extremadura. We keep the forecast of 2.95 million tonnes.

The area planted in Tunisia is lower than forecast with 16,000 hectares and the estimate of processing tomato production is therefore reduced to 900,000 tonnes, of which 850,000 tonnes for the production of tomato paste and 50,000 tonnes for the production of canned tomatoes. Until the end of June, climatic conditions were favourable for the vegetative development of tomato plants and fruits. In fact, the harvest started earlier than previous seasons on 18 June in the region of Kairouan. The first factory started processing from 19 June 19 and as of 30 June 30, 20 factories out of a total of 24 already process tomatoes from Kairouan and Cap Bon. The quantities processed on this date reached 95,000 tonnes of fresh tomatoes.

In Ukraine, cold and wet weather affected fields in June with 20 hectares destroyed by hail. The end of the month was very hot which favoured the development of diseases, but conditions are now back to normal. The harvest should start around 5-8 August and the volume expected remains 850,000 tonnes. 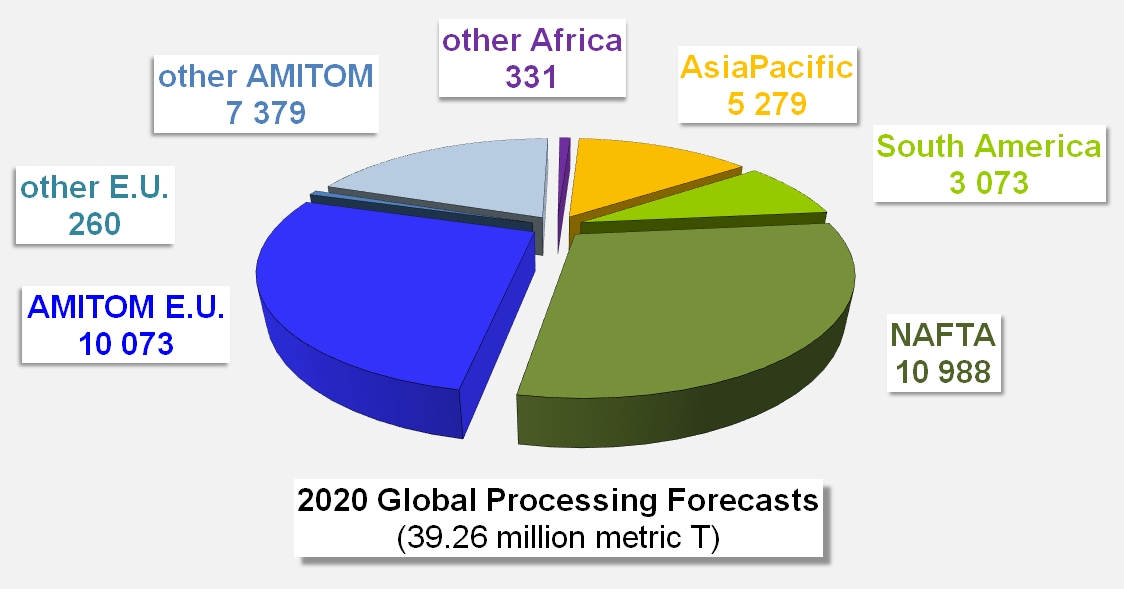 In California, the harvest of organic tomatoes started on July 2 and some conventional is expected to begin next week. The industry does not expect to be at capacity until the first week of August. As we begin to harvest the front end of the crop, we will be able to report more information.

In Canada, the tomato crop recently received some much-needed rain after the warm, dry temperatures Ontario has been experiencing. Early plants are starting to blossom and bear fruit. Reports to date are that the crop looks good with low disease pressure.

In China, all transplanting is completed, the planting area is 830,000 mu to 850,000 mu (c. 55,300 to 56,700 hectares), and the total raw material is expected to be 5.5-5.7 million tonnes. The recent high temperature and drought in Xinjiang, the growth is basically normal, but the fruit shape is relatively small, is expected to have a certain impact on yield. Due to less precipitation in spring and early summer, the possibility of more precipitation in the growing season increases, and the final output uncertainty is significantly higher than in the previous growing season.

In the US Midwest, there is no change to report.

In Brazil, the current travel restrictions still make it difficult to travel to collect information, so the previous estimate is maintained (1.05 million tonnes). 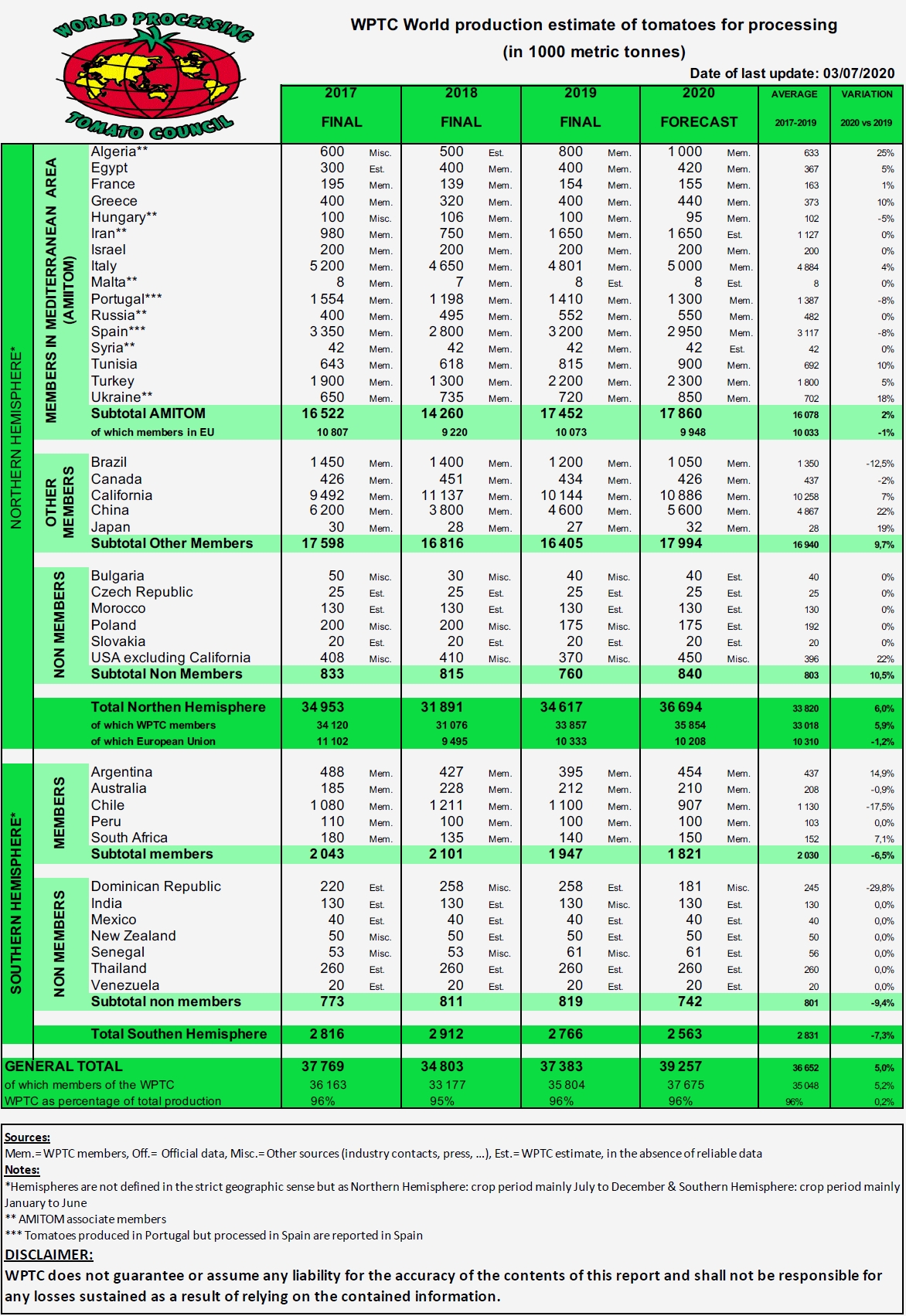