It is estimated that in 1997, worldwide exports of tomato products absorbed slightly more than 10 million metric tonnes (mT) of raw materials, in various processed forms. About ten years later, the volumes of raw materials absorbed by worldwide trade in 2008 had doubled and amounted to slightly more than 20 million tonnes. In 2018, another ten years later, trade flows only involved just over 25 million tonnes. So over the past ten years, the growth of trade in this sector has been two times slower than it was over the ten previous years. More specifically, the volumes of raw materials absorbed by total overall worldwide trade increased over the past seven years at an average annual rate of just over 1%, whereas the annual growth rate exceeded 6.3% for the period running 1997-2011. 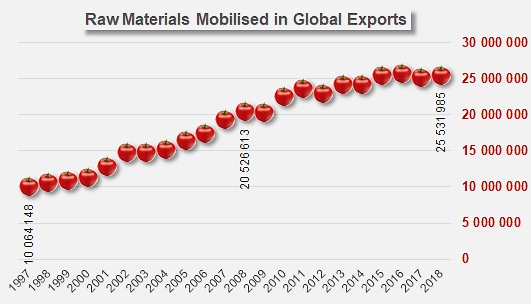 This situation did not change over the 2018 calendar year, and it now seems to be settling in for the long term. The volumes of raw tomatoes absorbed last year by worldwide exports are estimated at approximately 25.5 million tonnes, against 25.3 million mT in 2017, and they remain virtually unchanged compared to the 25.5 mT annual average over the three previous years (2015, 2016 and 2017).
2018 also saw the continuation of trends recorded in recent years in terms of the contribution of the different sectors to overall export shipments. With a processed farm weight equivalent of 19.4 million mT, exports in the paste category accounted for approximately 76% of the raw materials used around the world, a proportion that is virtually identical to the average of the three previous years. It is nonetheless important to note that within the worldwide export sector, the volumes of raw materials absorbed by the tomato paste category are currently stagnating, if not declining, and account for a shrinking fraction of total volumes (76% in 2018, like in 2017, against 80% of the total farm weight equivalent exported in processed form in 2011).
Conversely, exports in the sauces category, and even more so in the canned tomato category, have been absorbing growing volumes of tomatoes, and account for an increasingly large proportion of the farm weight equivalent in the form of processed products. Despite a slight dip in dynamics last year (see infographics in the appendix at the end of this article), worldwide exports of sauces are absorbing increasing volumes of raw materials (3.88 million mT in 2018 against 3.7 million mT on average for the period running 2013-2017), which amount to slightly more than 15% of the farm weight equivalent exported around the world in processed form. As for canned tomato exports, they absorbed the equivalent of 2.25 million tonnes in 2018 (which is 3.4% more than in 2017 and 6.8% more than over the three previous years), or slightly less than 9% of the total farm weight equivalent of exports in 2018. 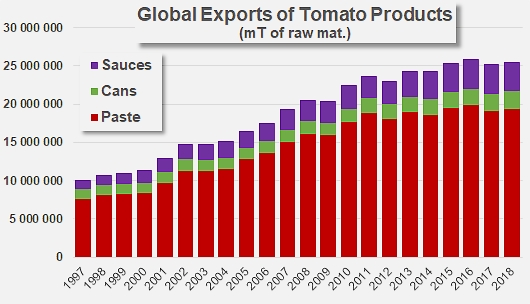 Of these three product categories, canned tomatoes remain the one with the slowest growth, but whose resistance has been strongest against the economic crisis that has been affecting our industry since 2011. The compound average annual growth rate (CAGR) in the volumes of raw tomatoes absorbed by canned tomato exports only varied moderately between the period preceding 2011 and the period since that year (from 2.9% to 2.4%, providing this category with an average annual growth rate of approximately 50 000 mT), compared to the sauces category whose growth recorded a notable slowdown (from 6.7% per year before 2011 to 4% per year after that date), but nonetheless providing the category with a theoretical annual increase in the volumes of raw materials absorbed of about 145 000 mT).
Notably due to the lower level of technical qualities required for raw materials and for processing operations (compared to the very demanding requirements of the canned tomato category) and a greater exposure to competition at the first-stage processing level (compared to the sauces category), tomato pastes have undergone increasingly wide and uncoordinated competition that has progressively been reported in recent years, due to a multitude of projects, industrial installations and factory relaunches in several countries of Africa, but also in India, Central America, Central Europe, etc. Along with other causes, like the evolution of the technical requirements for remanufacturing processes, the emergence of new local supply sources has contributed to shifting the focus of demand and to eroding the dominant supplier positions of about 12 leading countries in this processing sector.
In recent years, the annual increase in raw materials absorbed worldwide by exports of tomato paste has been virtually insignificant (less than 0.4%), with growth recorded at a theoretical rhythm of approximately 75 000 mT per year. This apparent (and possibly temporary) market saturation has most likely disrupted the mechanisms governing the recovery of worldwide prices, aggravating competition at the very time when efforts were being made to stabilize worldwide operations, a situation that should have contributed to a faster consolidation of prices in the tomato paste category. 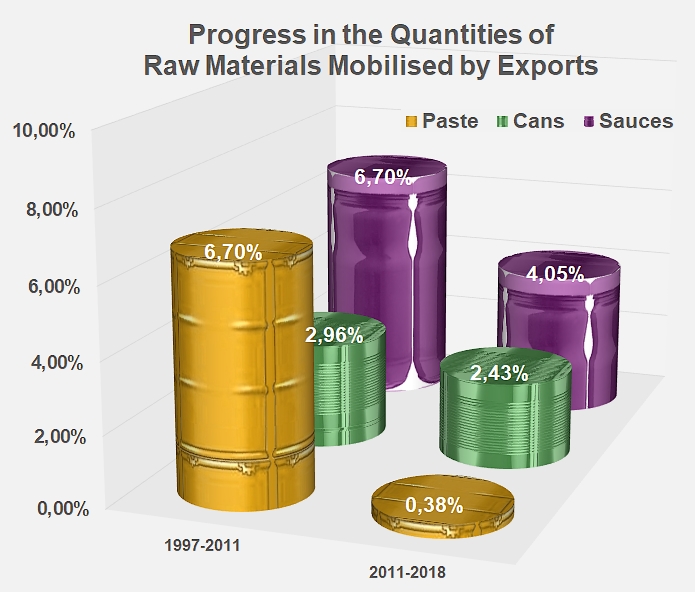 Compound annual growth rates (CAGR) of the three main export categories, before and after 2011
A detailed but schematic analysis of the different categories involved indicates that the volumes of raw materials absorbed by exports of paste above 30°Brix (20029091 and 20029099, which includes 36-38% purées, but also dehydrated powders) have been undergoing a phase of decline that has been fairly regular since the peak reached in 2011 (10.37 million mT approximately). The volumes absorbed by exports of 12-30°Brix tomato paste (20029031 and 20029039) have been varying around an average level of approximately 8 million mT since 2013, with a peak of 8.2 million mT of farm weight equivalent. Alongside these two market segments that supply the largest proportion of exports, the category of low-concentration purées (less than 12°Brix, codes 20029011 and 20029019) has been gradually decreasing since 2017, although it had resisted fairly well until then.

To summarize and compare these dynamics with those of paste and sauces exports (which have already been commented), it should be pointed out that over the past seven years, the most dynamic category of this industrial sector remains "low concentration" purées, whose average annual growth rate exceeds 4.1%. This growth rate is close to that of sauces, slightly above 4%, and significantly higher than the growth rate of canned tomatoes, estimated at 2.4%. The general dynamic, which is just above 1% per year, has been slowed by the relatively low growth rates of 12-30°Brix pastes (0.85%), and the actual negative growth rates of pastes over 30°Brix (-0.4% per year). It is a fact that the sectors that have best stood up to the shifts in dynamics affecting the industry since 2011 are those of pastes below 12°Brix and sauces. In other words, the general export dynamics of the industry are currently only being supported by the category segments or operations that use the lowest volumes of raw materials.

Some complementary data
Evolution of paste exports, according to category, expressed in volumes of raw materials. Peak volumes were reached in 2011 by pastes above 30°Brix, in 2016 by 12-30°Brix pastes and in 2017 by low concentration purées.

Average performances of the leading countries in terms of worldwide exports for the period running 2016-2018. The figures are presented for informational purposes and are taken from official export statistics supplied by each country for foreign sales of pastes, canned tomatoes and sauces. They do not take account of possible import volumes. 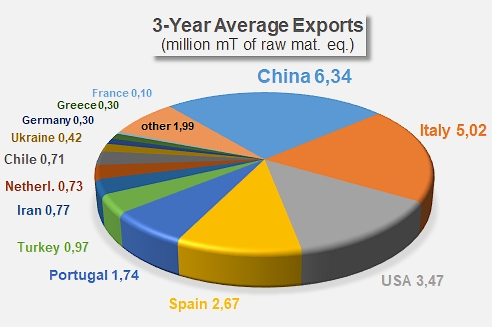 Evolution of each export category's proportion of the total annual volume of processed tomato products shipped around the world, expressed in farm weight equivalent. 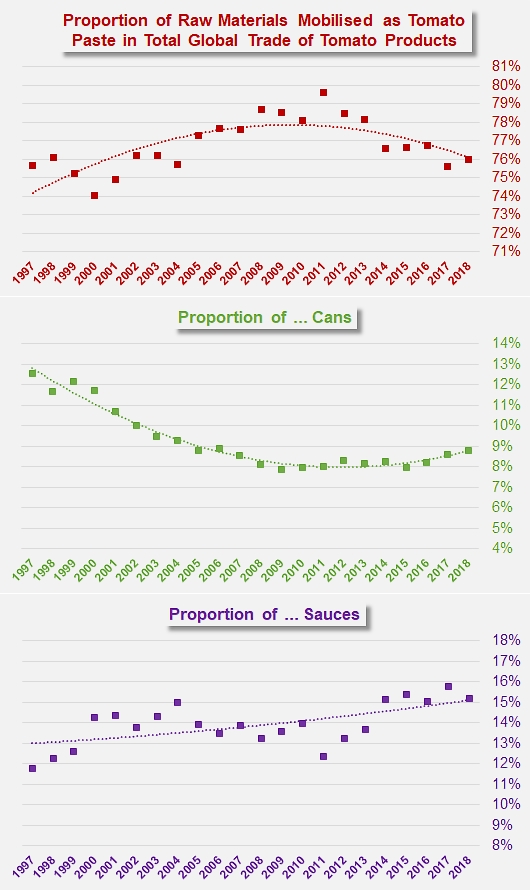 Further details regarding worldwide exchanges will be published in the special issue of Tomato News to be printed and distributed during the Tomato News conference held in Avignon in May 2019.