27/09/2019 - François-Xavier Branthôme - 2019 Season
NOAA: 2019 officially the hottest summer on record
During August 2019, the departure from average of the global land and ocean surface temperature tied as the second highest for that month in the 140 years of NOAA global temperature dataset records, which date back to 1880. 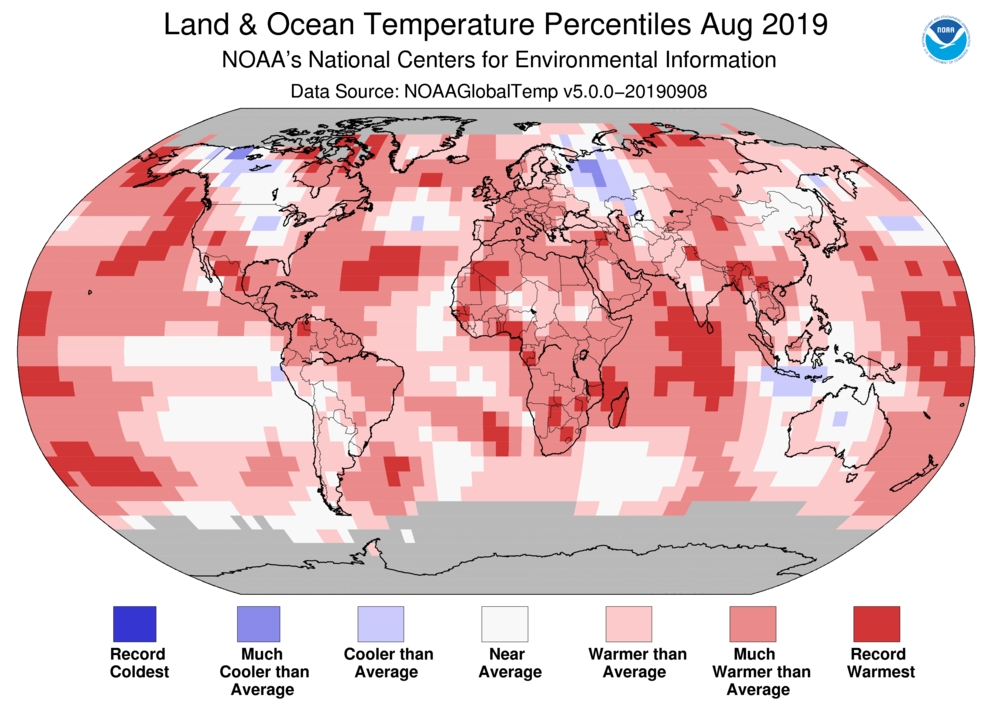 The August temperature across global land and ocean surfaces was 1.66°F (0.92°C) above the 20th century average of 60.1°F (15.6°C) and tied with 2015 and 2017 as the second highest for August in the 1880-2019 record. The five warmest Augusts have all occurred since 2014. August 2016 is the warmest August on record with a global land and ocean surface temperature departure from average of 1.76°F (0.98°C).
The hottest summer on record since 1880
According to National Oceanic and Atmospheric Administration data released on 16 September, the Northern Hemisphere just officially had its hottest summer on record since 1880. NOAA found that the average global surface temperature taken by thousands of thermometers, buoys and other sensors on land and sea tied with that of 2016 for the top spot, with a temperature anomaly of 2.03°F (1.13°Celsius) above the 20th-century average. In addition, August was the world's second-hottest such month, according to both NOAA and NASA, with unusually hot conditions seen from pole to pole and across every ocean.
June through August 2019 was the Northern Hemisphere’s hottest meteorological summer on record, tied with 2016. The period of June through August, which also marks the Southern Hemisphere’s winter, was the planet’s second hottest in the 140-year record at 1.67°F (0.93°Celsius) above the 20th-century average, behind June-August of 2016. The last five June-August periods are the five hottest on record. 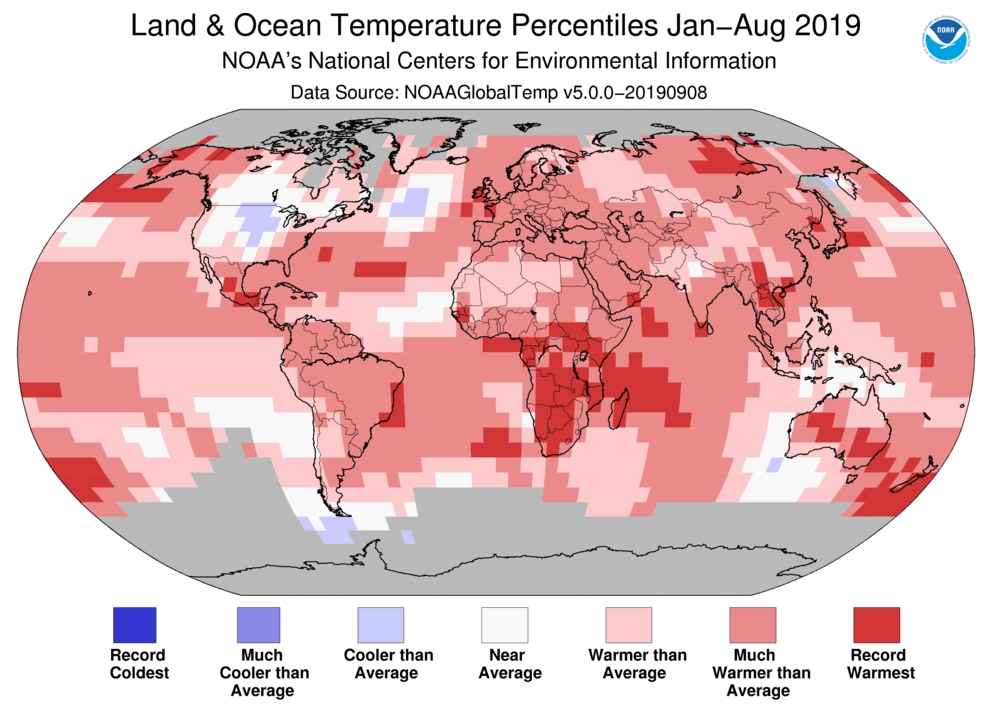 The year-to-date temperature across global land and ocean surfaces was 1.69°F (0.94°C) above the 20th century average of 57.3°F (14.05°C) – the third highest for January-August in the 140-year record, trailing behind 2016 (+1.94°F) and 2017 (+1.71°F).
What is remarkable about the 2019 record warm temperatures is that they occurred in the absence of a strong El Niño event in the tropical Pacific Ocean. Such events tend to boost global temperatures by warming the seas and sending more heat into the atmosphere. Instead, a weak El Niño has been present at times during 2019, but nothing like what occurred in 2016, which was the last time a Northern Hemisphere summer was this warm.
As explained by experts, this summer featured unusual events that are symptomatic of a rapidly warming planet. There was a brutal heatwave across Europe in July that established new national high temperature records and broke Paris' all-time hottest temperature.
Drier-than-average conditions
NOAA also commented on precipitation, pointing out that June-August rainfall was generally lower than normal across parts of the western half of the contiguous U.S., southern Chile, northern Argentina, north-eastern and southern Brazil, central Europe, central and eastern Russia, Mongolia, southern China and Australia.
Drier-than-average conditions were also present across much of Australia. Averaged as a whole, this was the nation's driest August since 2006 and the sixth driest since national precipitation records began in 1900, at 54% below average. Regionally, New South Wales had its driest August since 1995 and the fifth driest on record. 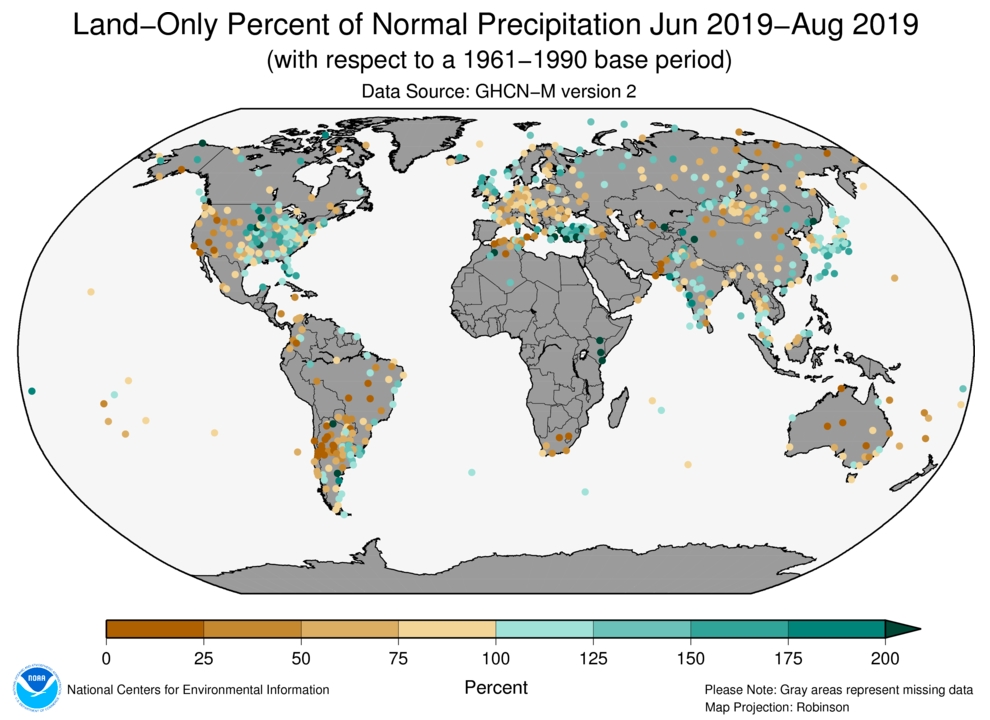 June-August 2019 Land-Only Precipitation Percent of Normal
Central Chile is suffering its worst drought in 60 years
The situation is serious enough for Chile to declare an agricultural emergency as extreme drought hits Santiago and outskirts. Central Chile is in the midst of what scientists have called a mega-drought – an uninterrupted period of dry years since 2010.
The capital Santiago, home to about half of the country’s population of 18 million, along with the regions of Coquimbo, Valparaiso and O’Higgins, bear the brunt of this year’s drought, the worst in six decades. “We are talking about a process of desertification rather than a temporary drought or absence of rain problem. We are talking about a tendency that has come to stay,” explained Felipe Machado, director of the country’s Resilience Institute.
Officials are increasingly concerned by the effects of climate change after the long drought that has affected a broad area, with detrimental effects on water availability and vegetation. The emergency status, impacting almost half the country, will see relief measures fast-tracked for the agricultural industry sector, including drinking water and medicine for animals.
The Mediterranean rim has also suffered extreme weather conditions this year, with a succession of notable impacts due to drought and locally violent precipitations in a context of generally insufficient rainfall. Except maybe for the extreme western part of the zone, most of the main European growing regions have recorded temperatures that have been 1 to 5°C higher than normal for August. Just about all production areas from Portugal to Turkey via Northern Italy have received only a very small proportion of the rainfall that is usual for the period.
As industry experts commented during the Tomato News Conference held in Avignon last May, the growing conditions for processing tomatoes are increasingly vulnerable to climate change, particularly to global warming, and are more and more frequently and violently impacted by episodes of extreme weather, like those that have been recorded at intervals throughout 2019. The likelihood of weather incidents occurring (frost, drought, hail, heatwaves, etc.) must increasingly be taken into account during preparations and planning for the crop season each year. 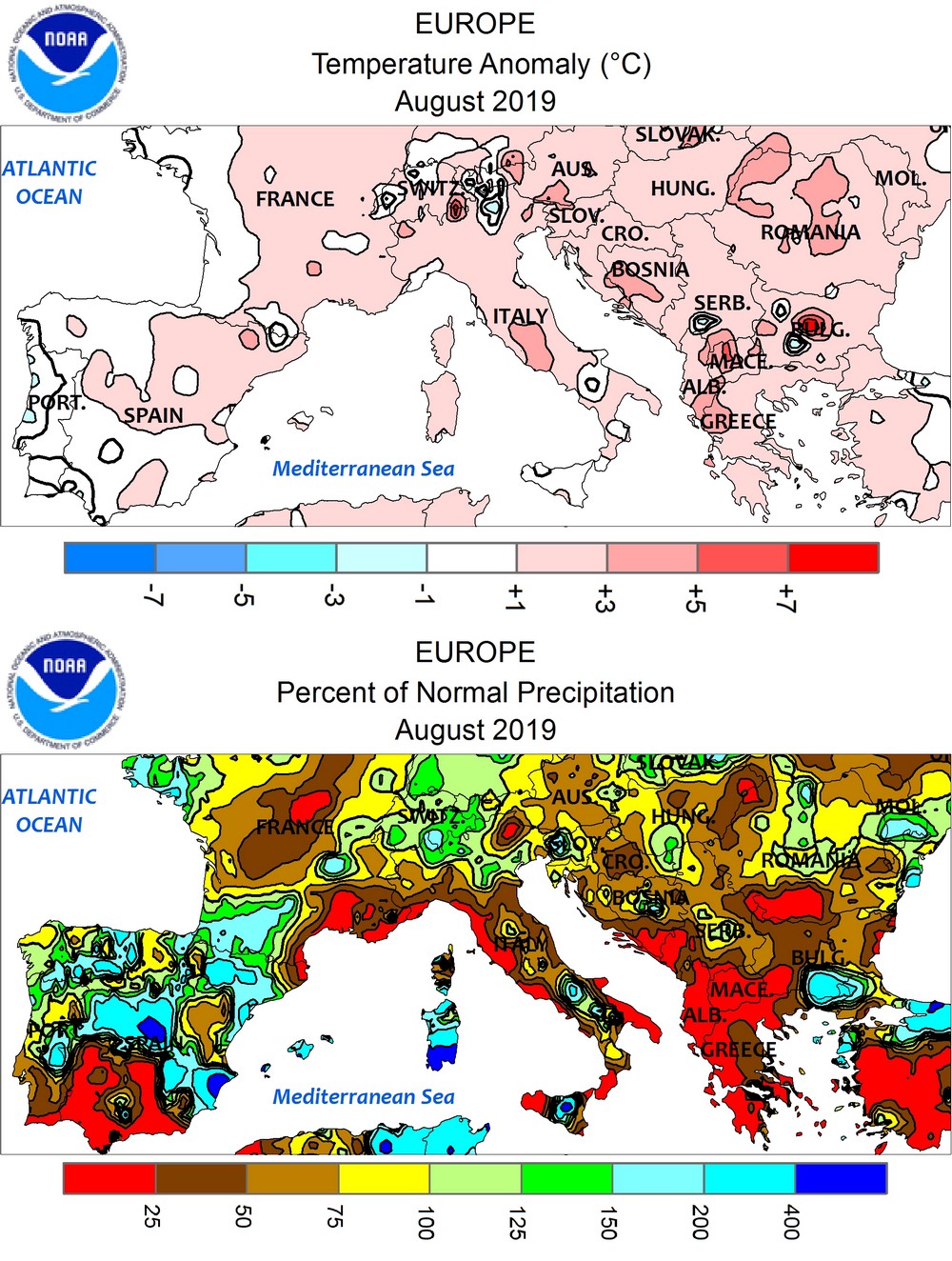 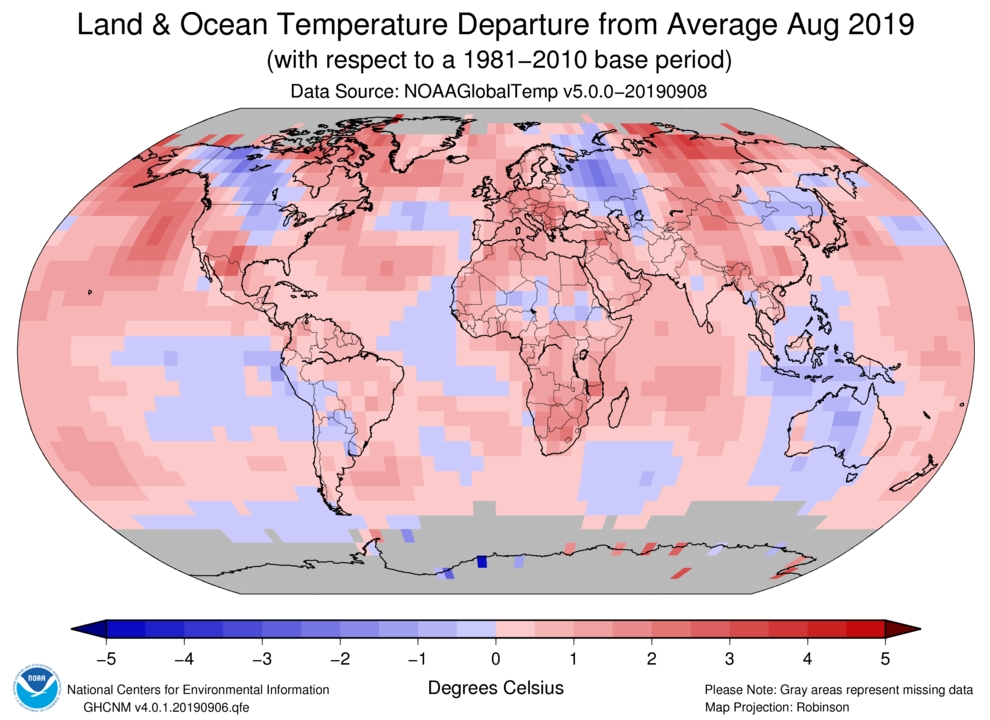 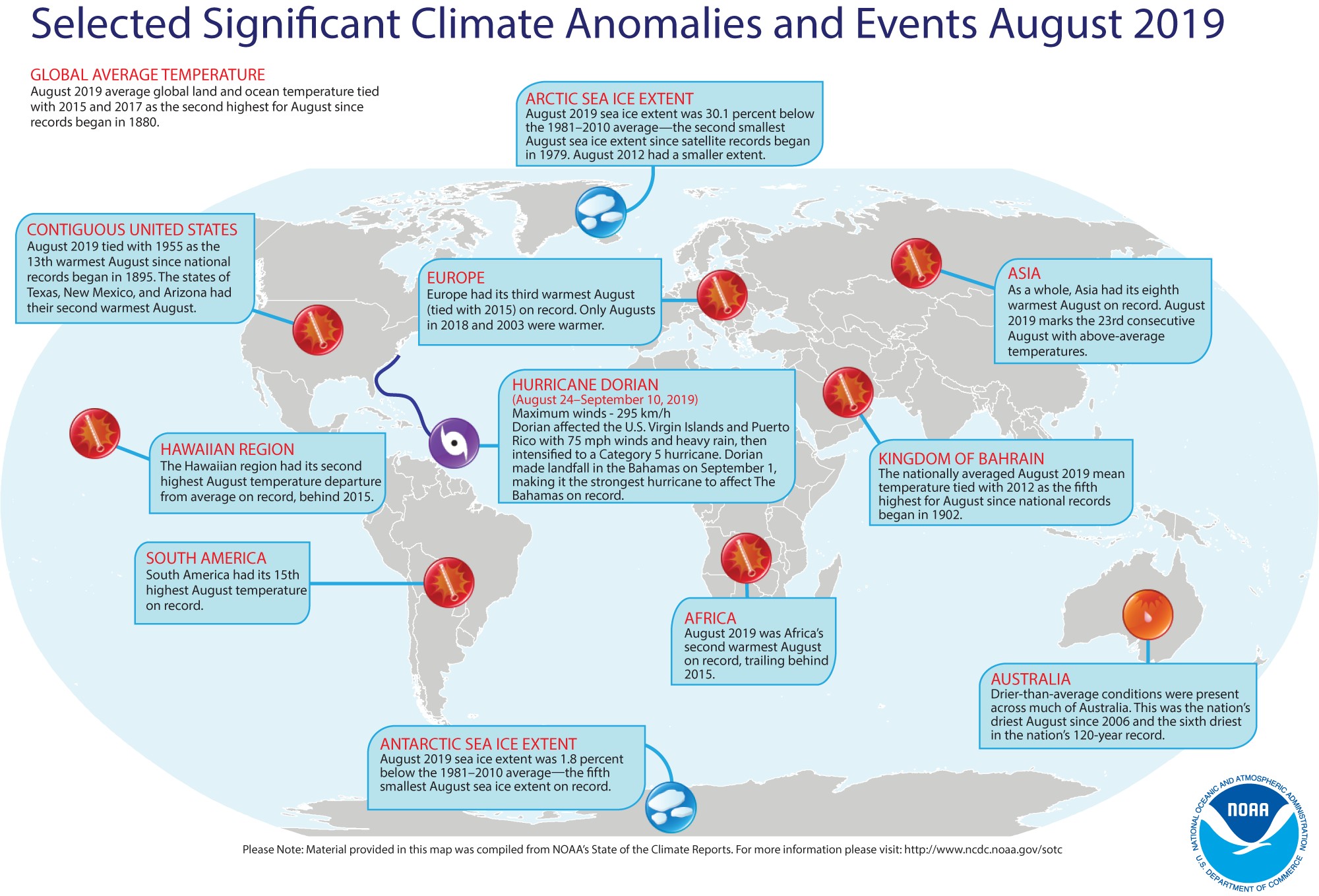 February 2019: a weather update for the main production regions