Weather situation as of end of April

The return of drought to California has been widespread – 58% of the state is now experiencing some level of dryness, according to the U.S. Drought Monitor – with extreme drought concentrated in 4% of the state, primarily in the north-western regions. 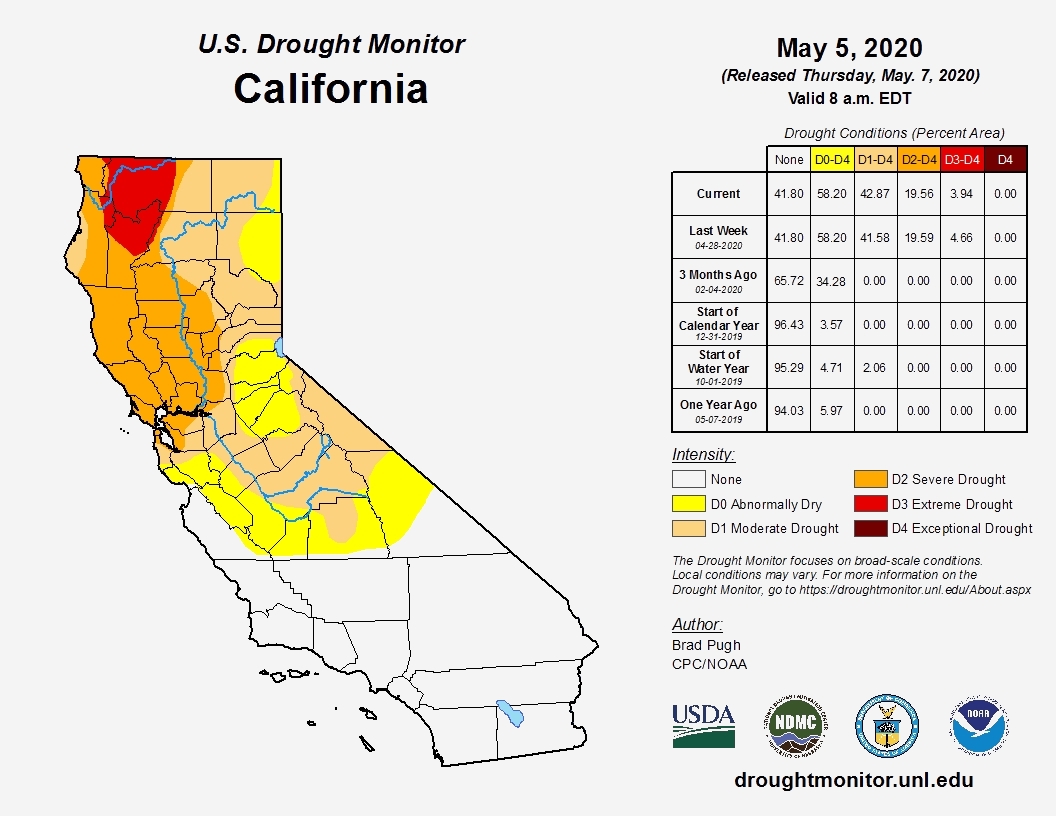 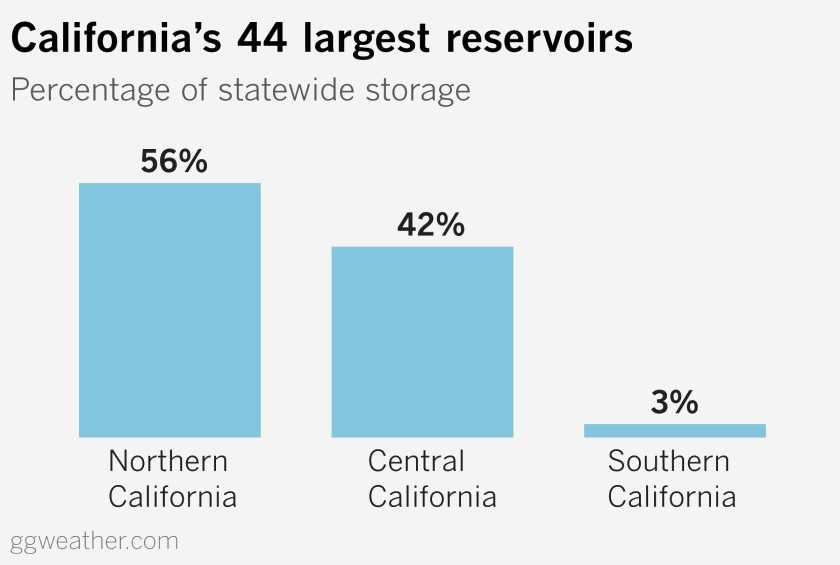 Rain fell in the south, but most of the big reservoirs are in the northern part of the state.

The problem with rainfall being more abundant in the south is that only about 3% of the state’s reservoir capacity is south of the Tehachapis (mountains between Bakersfield and Los Angeles). The biggest reservoirs are all in northern and central California. As a result, the latest Drought Monitor data released on Thursday show that moderate drought has continued to expand in northern California. The portion of the state considered to be in moderate drought increased from 16.1% to almost 22%, spreading into western Modoc and Lassen counties and across Plumas, Sierra, Nevada and northern Placer counties eastward to the Nevada border. The area concerned for the moment stands between 100 and 200 km (60 to 120 miles) east and north-east of the counties of Colusa, Yuba, Glenn and Butte, which are among the northernmost production areas for processing tomatoes in California.

Cities such as San Francisco and Sacramento finished April with about half their normal rainfall. Both are in the area of severe drought. The extreme drought area laps into a narrow sliver of southwestern Oregon. Crescent City, with 66% of normal rainfall for the season, is in the area of northwest California classified as being in extreme drought. 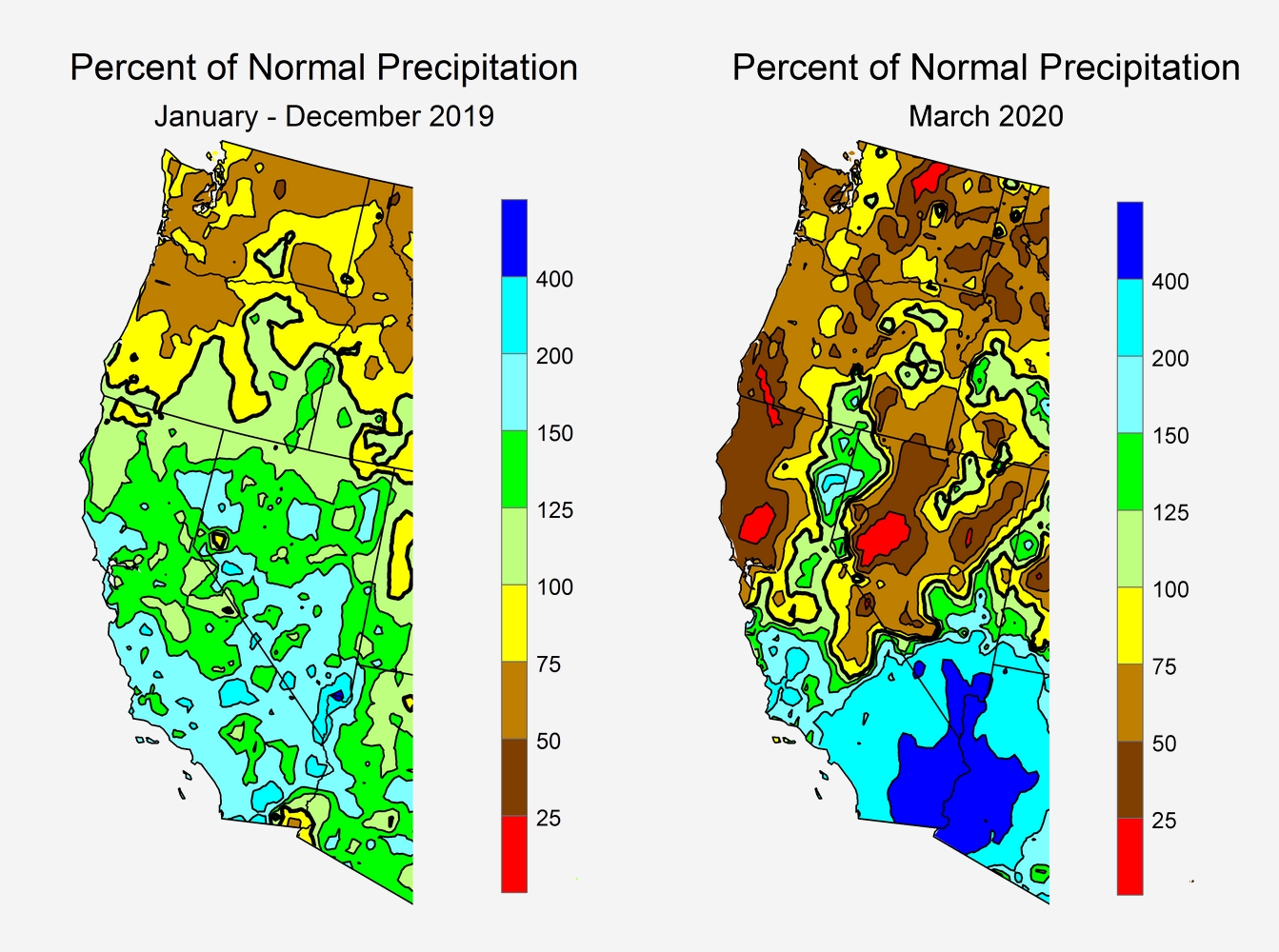 In its Spring 2020 newsletter, Morningstar explains that “California reservoirs are at above-average capacity despite the lack of rainfall. Temperatures have been running above normal, and the lack of rainfall has resurfaced the dreaded “d-word” (drought) into the California climate discussion. While the lack of rain facilitates an early planting window, the California Department of Water Resources reported that as of February 24, statewide water content in the Sierras was just 41% of the April 1 average with current Northern Sierra precipitation at about 51% of season average. California is fortunate in that there was good wet weather and a significant snowpack in late 2019. The state’s reservoir levels are hovering above average.
[…] On February 25, the Bureau of Reclamation announced an initial 2020 water supply allocation for Central Valley Project (CVP) contractors of 15% of their contract supply and the San Joaquin River Exchange Contractors and San Joaquin Settlement Contractors 100% of supply. While 15% of contract supply for CVP contractors is not much, it at least gives growers an amount of water that they can expect. State Water Project users are also at 15% allocation.
[…] Despite the challenges facing the processing industry in California, the potential for a good year still remains with resilient growers and processors linked with a drought year that normally produces above average yields.”

In the Mediterranean area, rainfall in March was much higher than usual averages for the Iberian Peninsula and in southwestern France, where it disrupted the preparation of crops. As mentioned in the WPTC campaign situation report of 30 April, rains continued in these areas into April, causing significant planting delays.
Conversely, the weather conditions were rather dry in Italy and Greece during the winter, and this continued in April: “there was no real rain [in northern Italy] in April and the ones expected during week 18 did not materialize. Irrigation is consequently needed in the fields, which are very dry as there has been limited rain since January […] and the lack of rain is worrying the farmers.” “There is a serious need for rain in parts of the Puglia area as the reservoirs are quite empty.” (See also our previous article regarding weather conditions published on 29 April.) 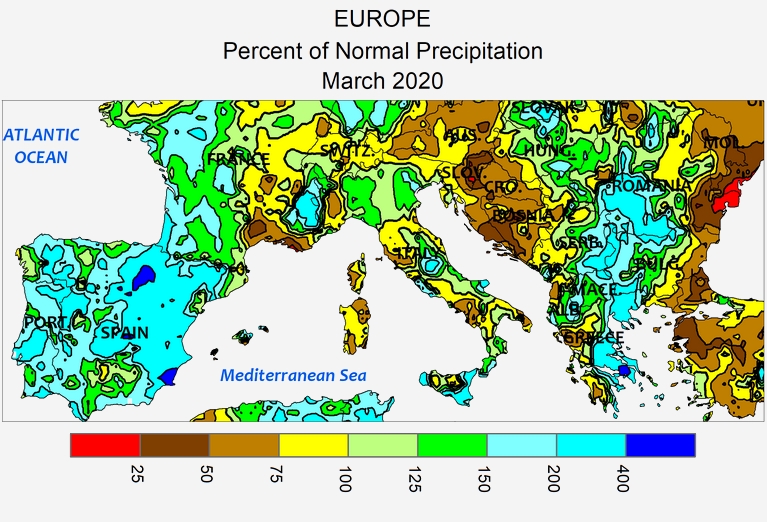 Winter and early spring weather conditions were not a concern in Turkey, where March was a rather dry month in the regions where processing tomatoes are grown. On the other hand, very significant rainfall was recorded in March in the regions located between the Mediterranean and the Caspian Sea, from Egypt to Azerbaijan via Syria and Iran in particular, while production regions in Ukraine and southern Russia (where the winter was dry and relatively warm) received very little rain during this period. 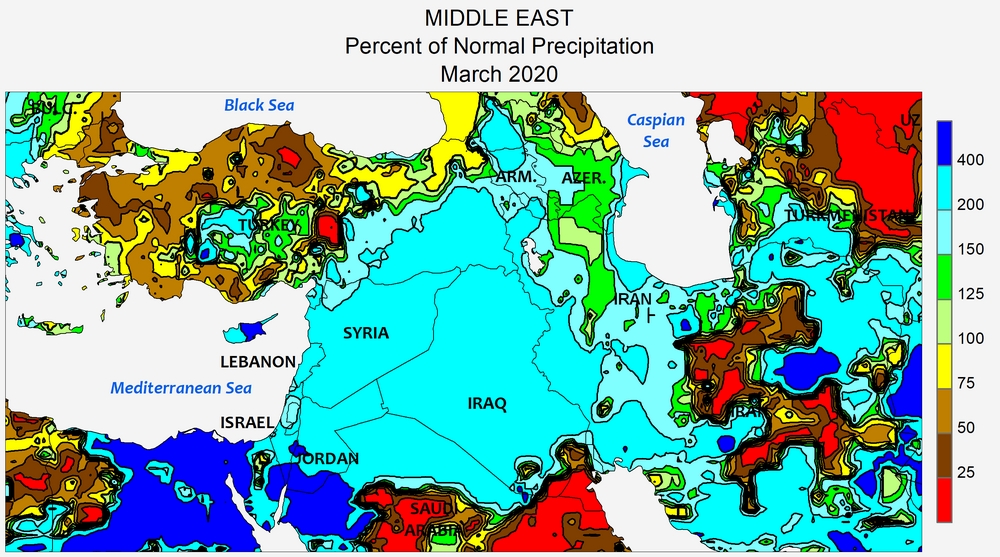 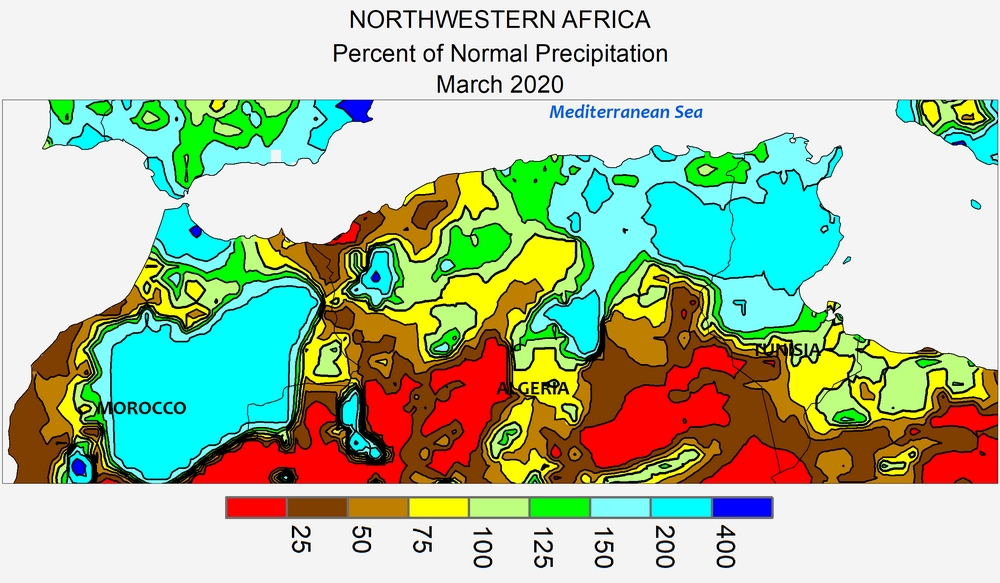 After a rather dry winter, March has seen more rainfall than usual for this period in Tunisia; according to the WPTC report of 30 April, and “weather conditions since March have been favorable for the development of the plants”, with planting operations proceeding normally. 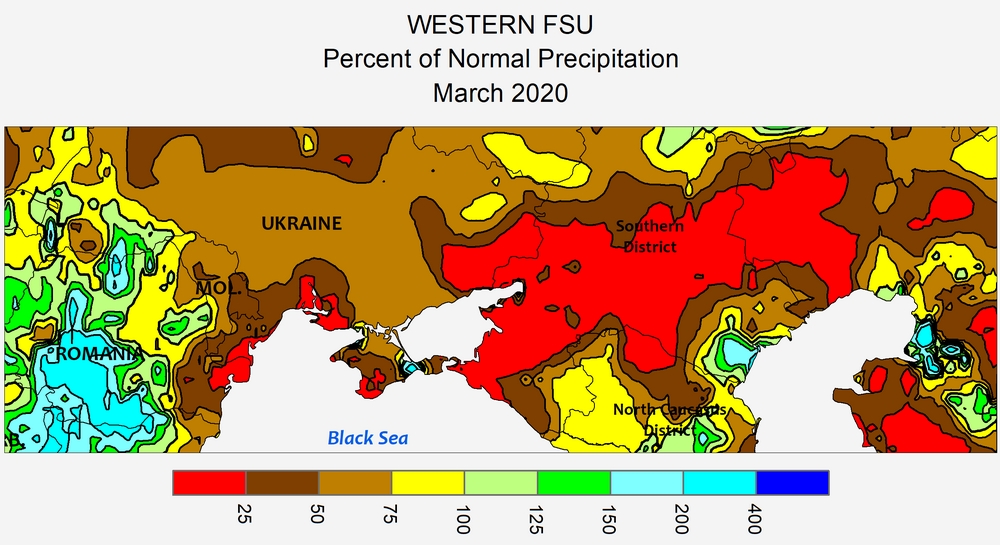 After a winter marked by significantly lower rainfall than normal and notably higher temperatures than usual for the time of year in China, March and April continued the trend with “a certain impact on the seedling preservation rate of tomatoes in the field.” Local professional sources have announced higher temperatures for the month of May, which are “expected to have a certain effect on the growth of tomatoes.” 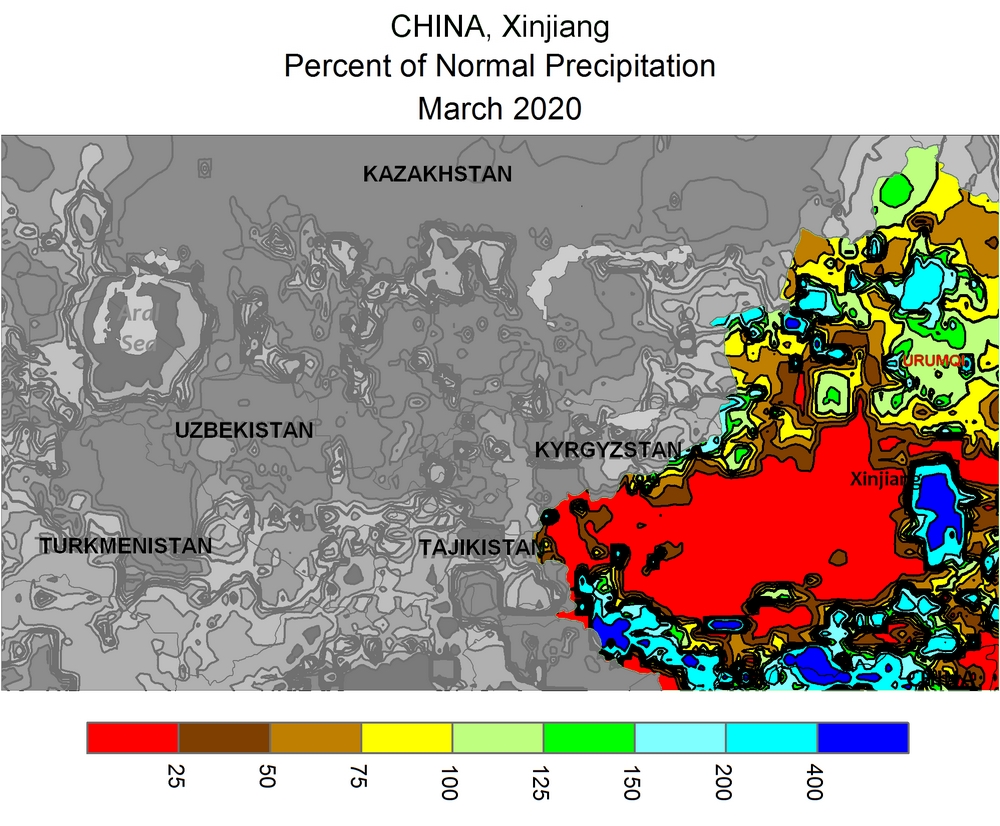 Some complementary data:
Follow the link below to the state table which highlights common impacts reported in California.
https://droughtmonitor.unl.edu/CurrentMap/StateDroughtMonitor.aspx?CA

Italy: another year under the threat of drought?