26/11/2019 - François-Xavier Branthôme
Action will prevent the introduction of Tomato Brown Rugose Fruit Virus into the U.S.
On November 18, 2019, USDA’s Animal and Plant Health Inspection Service (APHIS) announced it is taking immediate action to prevent the introduction of tomato brown rugose fruit virus into the United States and protect U.S. tomato and pepper production worth more than USD 2.3 billion annually. Indeed, these measures include protection against the significant damage ToBRFV could cause to processing tomato crops, as already decided in some countries after the virus has been detected in Belgium, China, Italy, Greece, Germany, Mexico, the Netherlands, Jordan, Turkey and the UK. The virus was detected and eradicated from a California tomato greenhouse in 2018. Tomato brown rugose fruit virus can cause severe fruit loss in tomatoes and peppers. It is easily spread through the use of contaminated tools, hands, and plant-to-plant contact. It was first reported in tomatoes in Israel in 2014.
APHIS has issued a Federal Order imposing restrictions on imports of tomato and pepper seed lots and transplants from all countries where the virus exists as well as restrictions on tomato and pepper fruit imported from Mexico, Israel, and the Netherlands. Because Canada imports tomato and pepper fruit from Mexico that may be re-exported to this country, USDA will also require Canada to inspect tomato and pepper fruit to ensure it is free of disease symptoms prior to export to the United States. These actions will be effective Friday, November 22. In addition, APHIS and U.S. Customs and Border Protection (CBP) will increase inspections of tomato and pepper seed, plant, and fruit imports entering from countries where the virus is known to occur and Canada, and will take action to keep any infected products out of the country. 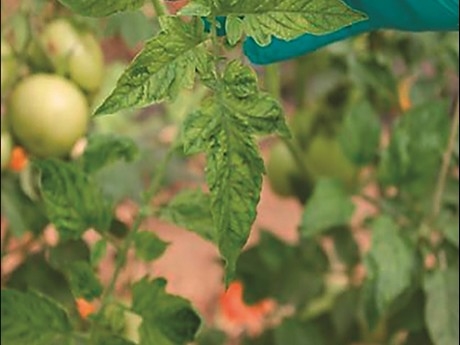 Typical symptoms of ToBRFV on tomato leaves.
Image courtesy of HM. Clause
Since 2015, ToBRFV has been detected in Belgium, China, Italy, Germany, Mexico, the Netherlands, Turkey, the UK and the United States. The rapid spread of ToBRFV is causing alarm within the seed production industry and tomato growers worldwide. Moreover, its ability to overcome the persistent Tm-22 gene conferring resistance to TMV and ToMV in tomatoes has facilitated the enactment of regulatory phytosanitary testing programs throughout Australia, Europe and North America. 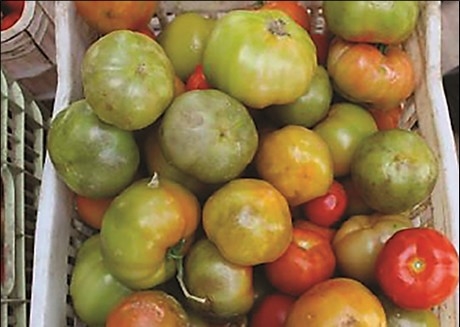 Typical symptoms of ToBRFV on tomato fruit.
Image courtesy of HM. Clause
Multiple diagnostic products and services are available for the detection of ToBRFV in seed and plant tissue. Molecular assays such as q-PCR can identify ToBRFV specifically, but a comprehensive screening of all known isolates has yet to be accomplished.  Serological assays such as ELISA will detect ToBRFV, but current antibodies will not distinguish it from closely related Tobamoviruses, such as TMV. Ideally, a singular product for identification of ToBRFV will become available. Moreover, international consensus on protocol and accepted technique will provide definitive analysis. Currently, accepted identification protocol for ToBRFV is variable and can involve the use of both serological and molecular diagnostic products.
Agdia, Inc., based in Elkhart (Indiana, USA), offers a comprehensive and trusted portfolio of plant pathogen and GMO testing solutions around the world since 1981. The company is working to develop antibodies that are specific to ToBRFV for use in ELISA (*) and ImmunoStrip formats. Moreover, Agdia is developing an isothermal molecular assay capable of confirming the presence ToBRFV with higher specificity and more analytical sensitivity than traditional serological methods. Meanwhile, Agdia offers non-specific molecular and serological diagnostic products for detection of ToBRFV. While these products will not identify ToBRFV, they will reliably detect Tobamoviruses and represent a logical and affordable high-throughput screening step in seed health testing programs. Samples that test positive for a Tobamovirus using Agdia’s serological assays can then be tested with molecular identification methods to confirm or rule out the presence of ToBRFV.
To determine viability of existing serological product offerings for ToBRFV screening, Agdia obtained isolates predetermined to be ToBRFV from at least three geographical locations. These included isolates from Italy, Israel and Mexico. Isolates were received in plant tissue samples and evaluated for the presence of Tobamoviruses using Agdia virus group PCR primers. Thereafter, the amplified products were sequenced, and sequence analysis identified the three ToBRFV isolates mentioned above. No other Tobamoviruses were determined to be present in these samples. 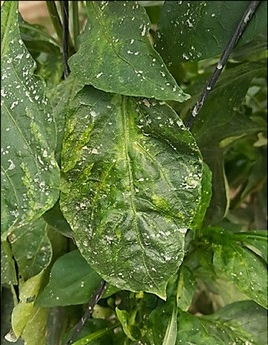 To determine relative sensitivity of their ELISA product offerings, Agdia conducted serial dilution experiments with the positive samples. Results indicate Agdia’s ELISA for detection of TMV is the most sensitive serological product commercially available, of the three tested, for the detection of the ToBRFV isolates tested. This is due to antibody cross-reactivity within the Tobamovirus genus. This analysis was conducted using each manufacturer’s suggested ELISA protocol. Agdia also tested their TMV ImmunoStrip against the samples determined to be infected with isolates from Mexico and Israel. This product provided positive results for all samples tested. Once again, this is due to antibody cross-reactivity within the Tobamovirus genus.
A second experiment compared Agdia’s TMV ELISA conducted using protocol recommended by the International Seed Testing Association (ISTA) to the same ELISA conducted using Agdia protocol. Analysis of results revealed an increase in sensitivity when using the ISTA protocol. Agdia states they will continue to test their products against ToBRFV isolates as they become available.
Some complementary data
A copy of the APHIS’ Federal Order is posted at
https://www.aphis.usda.gov/import_export/plants/plant_imports/federal_order/downloads/2019/DA-2019-28.pdf.
Geographical distribution:
https://gd.eppo.int/taxon/TOBRFV/distribution
(*) ELISA: The enzyme-linked immunosorbent assay is a commonly used analytical biochemistry assay. The assay uses a solid-phase enzyme immunoassay (EIA) to detect the presence of a ligand (commonly a protein) in a liquid sample using antibodies directed against the protein to be measured. ELISA has been used as a diagnostic tool in medicine, plant pathology, and biotechnology, as well as a quality control check in various industries.
Source: aphis.usda.gov, Agdia, Inc., hortidaily.com
Related articles