15/04/2019 - François-Xavier Branthôme - Lire en français
As we predicted in our previous analysis of US inventories of tomato products, the dynamics initiated in December 2017 led to a decisive resorption of surplus stocks (physical stocks of tomato products stored in warehouses, including a proportion already sold but still undelivered). Surplus inventories have not been this low since March 2015: according to our estimate and with regards to requirements stated for the coming seven months (until 1 October 2019), the surplus as of 1 March 2019 amounted to some 418 000 mT (farm weight equivalent), which is less than two weeks at the current rate of apparent consumption.

According to the figures published by the CLFP (California League of Food Producers), total inventories of US processed tomato products were approximately 8.2 million short tons (sT) (7.473 million metric tonnes (mT)), stated on a raw product equivalent basis, as of 1 March 2019.
Inventory is down 6.2% from the previous year's level (8.785 million sT, or 7.969 million mT). Apparent disappearance of tomato stocks has increased 5.3%, totaling approximately 10.4 million sT (9.45 million mT) during the nine-month period of 1 June 2018 to 1 March 2019, as compared to the prior reporting period. Over the twelve-month period running 1 March 2018 to 1 March 2019, apparent disappearance amounted to 13.33 million sT (12.09 million mT), up by 4.9% compared to the monthly rate recorded over the previous twelve months in March 2018.

According to the current annual pattern of domestic and foreign demand, US apparent consumption is expected to amount to approximately 13 million sT (11.78 million mT). Along with current processing prospects (12.565 million sT or 11.4 million mT), this figure should mean that the 2019/2020 marketing year results in a further substantial decrease in surplus volumes, and may even place the US industry in a similar position to the one it was in during the period running December 2013 to March 2015

However, according to the estimates of a number of local operators, based on consumption data from the first nine months of the 2018/2019 marketing year, on available figures regarding foreign trade and on the most realistic forecasts for domestic and foreign consumption for the next marketing years (2019/2020), the US industry only intends to plan a carryover in June 2020 of the situation that will see in the next processing season. Californian operators "don’t see exports increasing over the next year due to strengthening of the dollar as well as flat US consumption", and they estimate that inventories expected at the end of June 2020 will still equal about five months of consumption, like they are expecting for 1 June 2019. A number of them do not consider this level as being a key threshold likely to induce any improvement in market conditions: “In the past, the market started to firm up when we had 4 months or less inventory.”

For the time being, almost 500 000 mT of raw material equivalent have "disappeared" from inventories, compared to inventories in March 2018. This impetus is largely the result of a major drop in the volumes of available paste intended for remanufacturing, and also, to an extent, to a decrease in stocks of paste for sale (particularly volumes intended for export). 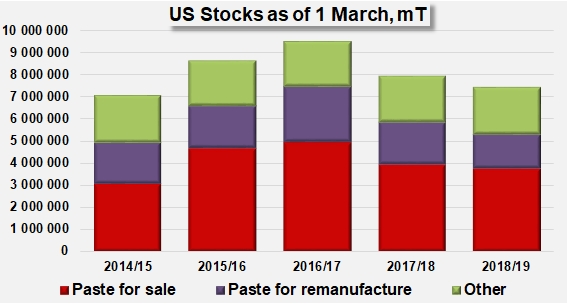 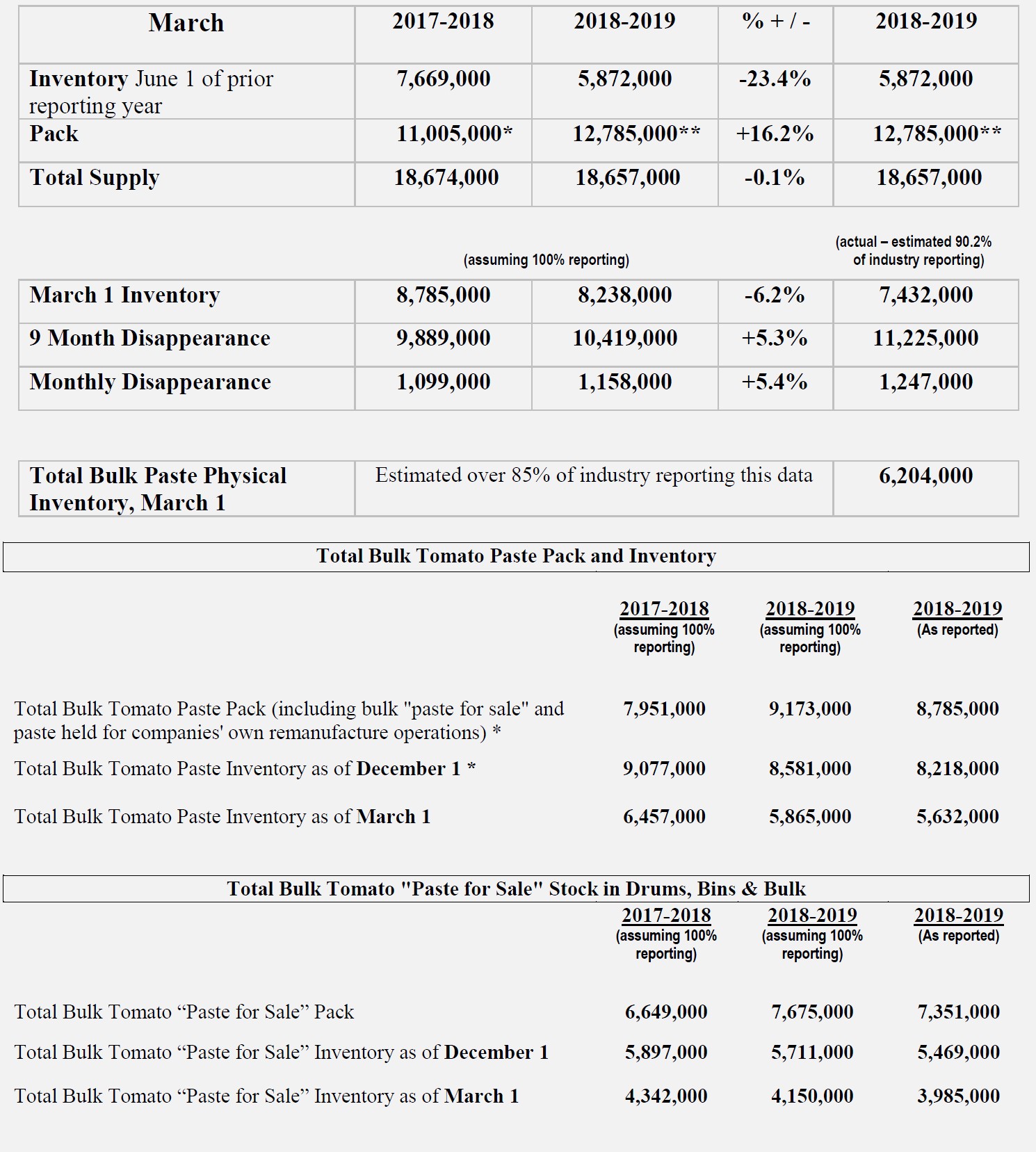