Official inventory figures released by the California League of Food Producers (CLFP) on 5 January (see our corresponding article) show a drop of more than 13% in the quantities physically present in the warehouses of US companies as of 1 December 2020 compared to those recorded in early December 2019. Expressed in fresh tomato equivalent, the total stocks of processed tomato products in the United States amounted to around 8.45 million metric tonnes (mT) (or 9.32 million short tonnes (sT)) on 1 December 2020. In December of the previous year, stocks amounted to the equivalent of 9.75 million mT. So the different production and consumption dynamics (domestic and export) have led to a drop in stocks of nearly 1.3 million mT compared to last year.

This decrease has been based on a limitation of activity in 2020, motivated by the stated desire of the US sector to return to a situation of balance between demand and processing (10.7 million mT), which remained practically identical (+1%) to the quantities processed during the previous campaign (10.6 million mT in 2019). At the same time, some local operators have reported a relatively good performance of foreign sales and, even more importantly, a consolidation of domestic consumption linked to the CoVid pandemic. “The improved movement was not a surprise. Bulk paste and diced shipments have been strong and retail data supports the increases in demand due to Covid-19 changes in consumer behavior. Reported total stock inventories are at the lowest level since December 2006.”

In the final count, the “apparent disappearance” of US stocks of processed products increased by 13.1% (757,000 mT) compared to the previous reference period, absorbing around 6.52 million mT (7.2 million sT) during the six months from 1 June 2020 to 1 December 2020.
Over twelve months, from 1 December 2019 to 1 December 2020, apparent disappearance absorbed a little over 12 million mT (13.2 million sT), a more modest increase over the whole year (of about +1.5% compared to the previous twelve-month period). The contrast with the last six months makes the impact of the Covid crisis on domestic consumption even more evident.

According to figures from the CLFP, total inventories of pastes (intended for resale and/or remanufacturing) have fallen by more than 1.25 million mT, i.e. a spectacular reduction of more than 17% in the quantities physically present. The improvement in this situation resulted from both lower production (-300,000 mT) in the pastes category over the last season and an increase in sales over twelve months (+5.7%) equivalent to more than 470,000 mT of “tomato” raw materials. In a detailed breakdown, the improvement seems to have been based on the category of paste for sale much more than on that of paste intended for remanufacture, the quantities sold having increased by more than 9% (+640,000 mT, fresh tomato equivalent) for the former, and having fallen by nearly 13% (-170,000 mT fresh tomato equivalent) for the latter. Likewise, sales of products other than pastes are reported to have fallen sharply (-8%) between December 2019 and December 2020 (-300,000 mT fresh equivalent).

However, local professional sources point out that the figures published by the CLFP do not “match” the situation experienced in the field by the various stakeholders of the industry: “We have not seen the level of growth in our own movement of [tomato] products to support what is being reported. We are not seeing any strong indication that our customers are perceiving a shortage. Bulk paste pricing is firming up, but not to the levels that would indicate a pending market shortage. We also don’t see our competitors signaling that they are facing a shortage of available stocks.”
It is a fact that foreign sales do not seem to have recently reached levels likely to support the performances described by the figures of the CLFP. US exports of pastes for the period November 2019 to October 2020 fell by 25,000 mT of finished products, while the sauces sector recorded a decline of around 13,000 mT. These drops are even more pronounced when compared to the average results of the three previous years (see graphs in the appendix).

However, it is clear that there has been a significant increase in apparent US disappearance, the average monthly rate of which (classically higher over the summer-autumn semester) has actually risen to around 1 million mT (fresh tomato equivalent) over the last twelve months and even approached the threshold of 1.1 million mT over the last semester. To pick up on the analysis of one local operator, it is unlikely that “exports have expanded to explain the projected increase in movement. Especially in the category of all products other than bulk tomato paste. That will mean the data is suggesting that domestic consumption grew significantly. Even with the suggested 'Covid Effect', the amount of growth just seems too large.”

According to current data, the quantities available correspond approximately to a little less than eight-and-a-half months of apparent consumption, quite clearly lower than what it is usually agreed as a reasonable threshold of availability as of 1 December. As already happened in 2014 and even more markedly in 2006, the US industry is no longer in a situation of surplus and even seems, apparently at least, to risk a deficit in production.

At the current rate of apparent disappearance, the quantities available on 1 June 2021 could be close on 2.8 million mT (fresh tomato equivalent), i.e. around 3 million sT, a level that is relatively low but fairly consistent with the level recorded in June 2007. The current trajectory of apparent disappearance is around 12.1 million mT (or 13.3 million sT), in sharp contrast with the result of the last processing season. 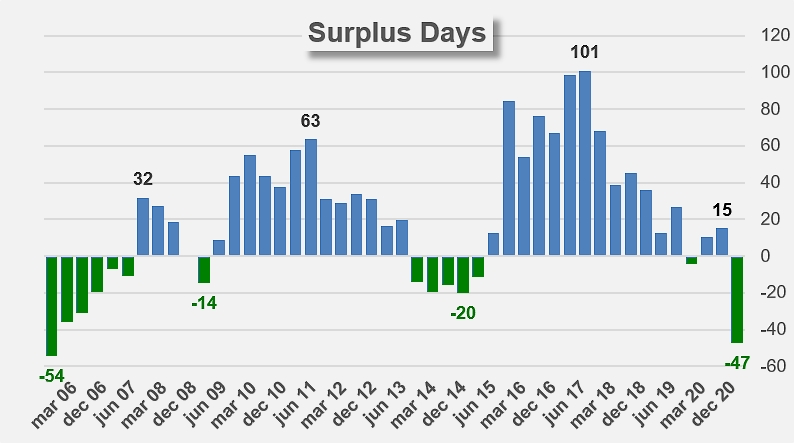 This makes it difficult to draw clear lessons from the situation in December 2020. This is why it will be important to closely analyze the USDA report on processing intentions in California for the 2021 crop, which is expected to be released around the end of January. For the same reason, Californian operators estimate that ”it will also be very interesting to see the March 1, 2021 CLFP report to see if there appears to be a significant correction in movement.”

Some additional data
The composition of available inventories on 1 December shows a sharp reduction in the quantities available over the past five years, mostly attributable to the pastes category.

The quantities of tomato products exported by the USA (for the period running November-October) recorded significant decreases in the pastes and sauces categories – at least until October 2020, which were not offset by the slight increases in performance recorded by the canned tomatoes category. 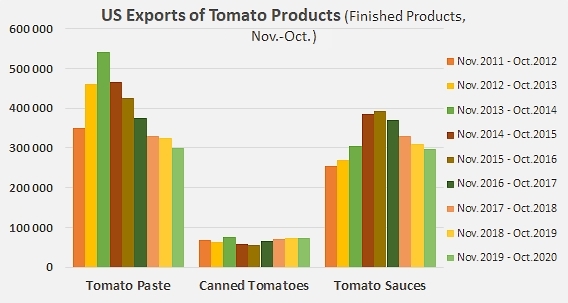