The inventory situation described by the CLFP shows an insignificant rise in the level of surplus quantities (from -4 days according to an estimate on 1 December 2019 to +11 days estimated according to stocks as of 1 March 2020). So except for unforeseen events or circumstances, the quantities of goods still present in company warehouses as of 1 March should allow the US industry to supply marketing channels until the first half of October 2020. 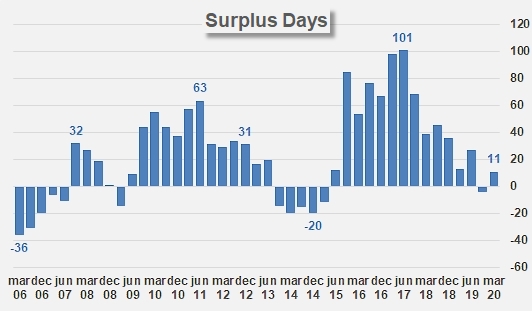 Inventory surplus expressed in number of days of consumption
The slight variation observed in surplus quantities is the consequence of a minimal drop in the rate of apparent consumption: over the past nine months (July 2019 – March 2020) sales of tomato products have absorbed the equivalent of 8.64 million mT of raw tomatoes, almost 9% less than over the period running July 2018 – March 2019. However, what could appear to be a sharp drop in performance should be put into perspective, since the results for the 2018/2019 marketing year had been particularly satisfactory, with the best figures for the last six years. Over twelve months (April 2019 – March 2020), total sales (domestic and export) shifted 11.209 million mT (12.357 million sT), which is about 7% less than over the same period of the previous year, but significantly more than what US processors as a whole handled during the last season (10.51 million mT or 11.59 million sT).

This result must also be compared with US processing intentions for the 2020 season (11.25 million mT or 12.408 million sT), as announced at the start of the year (see the WPTC season update on 11 March 2020). According to current forecasts and just a few days before the end of March, with the potential impact of the Covid-19 crisis on activity levels of all global industries still extremely difficult to evaluate, the quantities mentioned could be lower than the estimated requirements of the US industry (for the national market and for exports). The theoretical shortfall in volume could be approximately 430 000 mT (about 475 000 sT) (raw material equivalent). Despite its possible lack of precision, this current estimate of the future capacity of the US industry to meet demand over the next twelve to fifteen months suggests that the situation of inventories could be even more tense in June 2021 than it is today.

CLFP data also shows that the significant drop (8.1%) in the quantities still in stock as of 1 March 2020 is due to drastic reductions in inventories recorded in the paste for sale category and in categories of products other than pastes, compared to the situation in March 2019. The quantities of “paste for sale” available on 1 March 2020 were lower by more than 480 000 mT (raw material equivalent) than they were in March 2019, a decrease of 13%. It is important to note, however, that US foreign performance levels could only have contributed modestly to this recovery, since with around 301 000 mT of finished products exported over the period running February 2019 – January 2020, the total is 10% lower than it was over the corresponding period of the previous year and 20% lower than the average of the identical periods of the previous three years (2016/2017 to 2018/2019).
From March 2019 to March 2020, the category of products other than pastes also recorded a significant dip in inventories, decreasing by more than 223 000 mT (raw material equivalent), or approximately -10%.
On the other hand, despite the efforts of US operators, stocks of paste intended for remanufacture increased significantly between March 2019 and March 2020 (+101 000 mT or +7%). 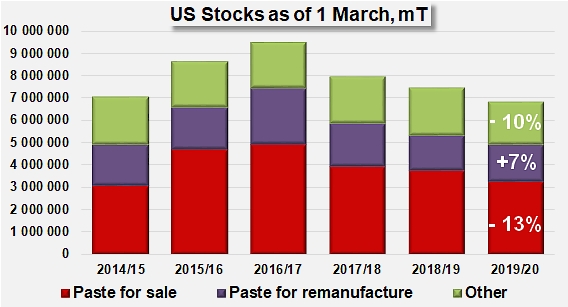 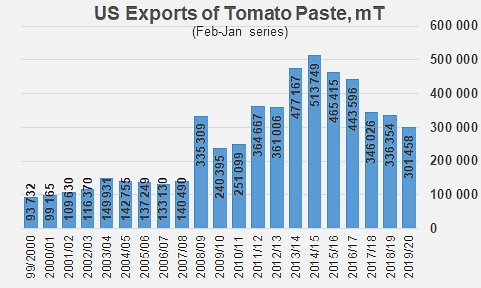 Tomato paste for sale in drums, bins and bulk, in metric tonnes

Total paste pack and inventory (“paste for sale” and paste for remanufacture), in metric tonnes

California 2018: production results according to county