According to the report released by the California League of Food Producers on 19 June 2020, total inventories of U.S. processed tomato products were just under 4.7 million short tons (4.233 million metric tonnes (mT)), stated on a raw product equivalent basis, as of 1 June 2020. The quantities still physically present (but a part of which has already been sold) are 13.7% lower than those recorded on 1 June 2019, a level that is slightly higher than what the apparent disappearance pattern of previous quarters led operators to expect (4.36 million mT, see our March 2020 article). So the commercial activity (domestic and export) of the US sector is on a trajectory that virtually matches the expectations of local operators, at the end of a marketing year whose performance is slightly down compared to that of 2018/2019. Apparent disappearance of tomato stocks decreased 6.4%, totaling approximately 12.4 million short tons (11.275 million mT) during the twelve-month period of 1 June 2019 to 1 June 2020, whereas the monthly disappearance rate amounted to 13.25 million sT (12.02 million mT) over the 2018/2019 period (see appendix). 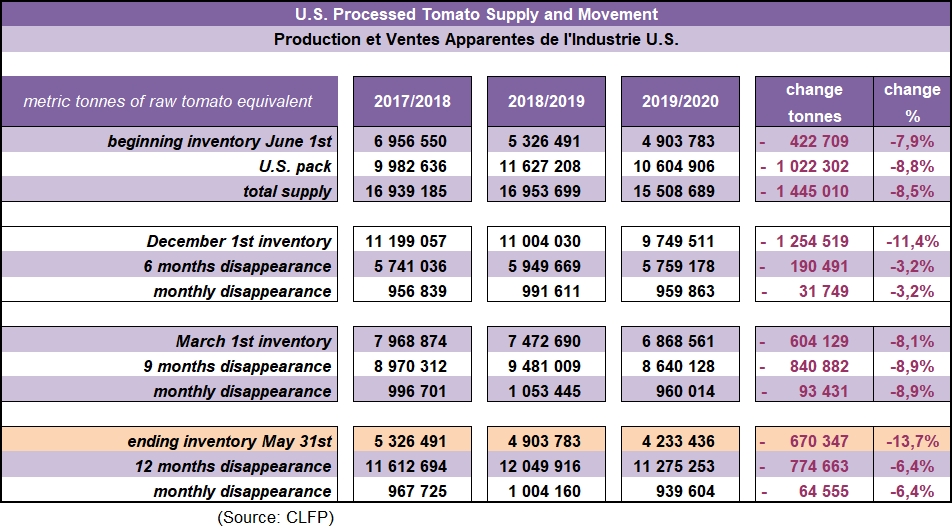 In general, just a few weeks before the start of the 2020 season in California, available quantities seem to adequately cover requirements. At the current rate of apparent monthly disappearance, present stocks are supposed to be sufficient to supply the US markets for around four and a half months, a duration just over that which local operators consider normal at this date (four months).
Similarly, official processing prospects are more or less in line with the trajectory of apparent annual consumption defined for the 2019/2020 marketing year. Taking seasonal variations into account, the requirements of the US industry in order to meet demand are currently at around 12.78 million sT (11.59 million mT) over twelve months. Barring unexpected circumstances, the processing target of 12.5 million sT (11.34 million mT) for the 2020 season should lead to a situation in June 2021 that will be similar to what the US industry is currently experiencing in terms of inventories and surplus stocks, i.e. almost perfect equilibrium. 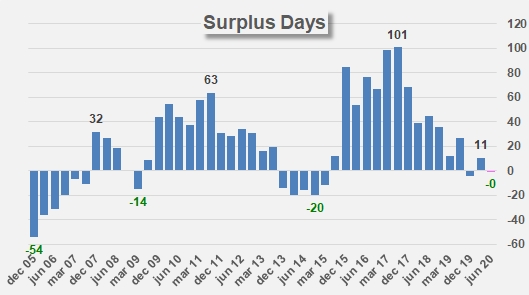 This reduction of excess stocks, which was particularly evident in the last update in June and has been gradually implemented over the past three years, can be primarily attributed to the category of paste for sale, especially on the foreign markets. The proportional share of the total inventory taken up by this product category has therefore decreased, from more than 54% of overall stocks recorded on 1 June 2017 to less than 47% on 1 June 2020. A major effort has also been made in the category of pastes intended for remanufacturing, which were also produced in large quantities in 2014/2015 and 2015/2016, and represented a large quarter (26%) of the products available in June 2017, but only accounted for approximately 22% of the quantities physically present on 1 June 2020.

The US industry is nonetheless faced with a difficult trade context, in particular due to the EUR/USD exchange rates that have been more favorable to European products. The data available at the time of writing this article shows that US foreign sales of pastes for the first eleven months (June-April) of the 2019/2020 marketing year amounted to just under 267 000 mT of finished products, placing this year's trade activity on a trajectory that should reach around 291 000 mT, down by more than 16% from the performance of 348 000 mT of paste exported during the 2018/2019 marketing year.
We will have the opportunity to return to this point in coming weeks when the final results of the marketing year are finalized. We will then be able to assess more accurately the level of US domestic consumption of tomato products. For now, it is important to note that the most significant drops in US foreign operations in 2019/2020 were logically recorded on the European markets (-42%, -24 000 mT) but also, more surprisingly, on captive or usually very dependent markets (North America -19%, -9 000 mT; Central America -8%, -7 000 mT; South America -43%, -3 000 mT; but also Asia-Pacific, Eurasia, Far East, etc.), with the notable exception of the Middle East, whose supplies increased by 32% (+7 600 mT). 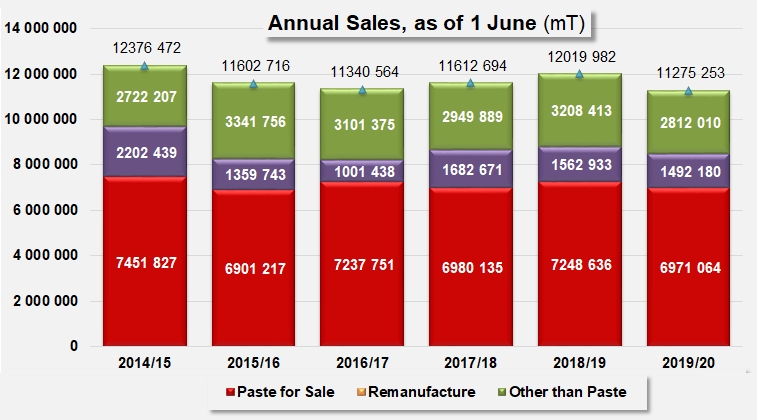 Insofar as the analysis of data provided by the CLFP makes it possible to state objective conclusions, sales figures (domestic and export volumes combined) show that the downturn has affected all components of trade during the 2019/2020 marketing year. The most affected product category was “products other than paste”, whose apparent sales fell by 12%. The decline in sales of paste for remanufacturing was more limited, at around 4.5%. Finally, pastes intended for sale saw their sales drop by a little less than 4% between 2018/2019 and 2019/2020.

At the end of the marketing year, the U.S. bulk tomato paste-for-sale inventory on 1 June 2020 was approximately 2.2 million short tons (1.98 million mT), which represents a spectacular decrease (-22%) compared to the situation of 1 June 2019. Total bulk tomato paste stocks, including inventory held for remanufacture, were estimated to total 3.2 million short tons (2.91 million mT), down sharply (-20%) compared to the quantities present last year on the same date. So the update on 1 June 2020 shows a significant decrease in stocks of paste intended for remanufacturing (-15%) and, conversely, a slight increase in the quantities of products other than pastes. 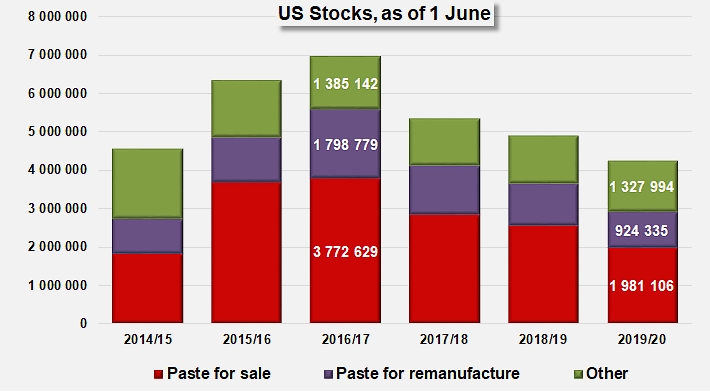 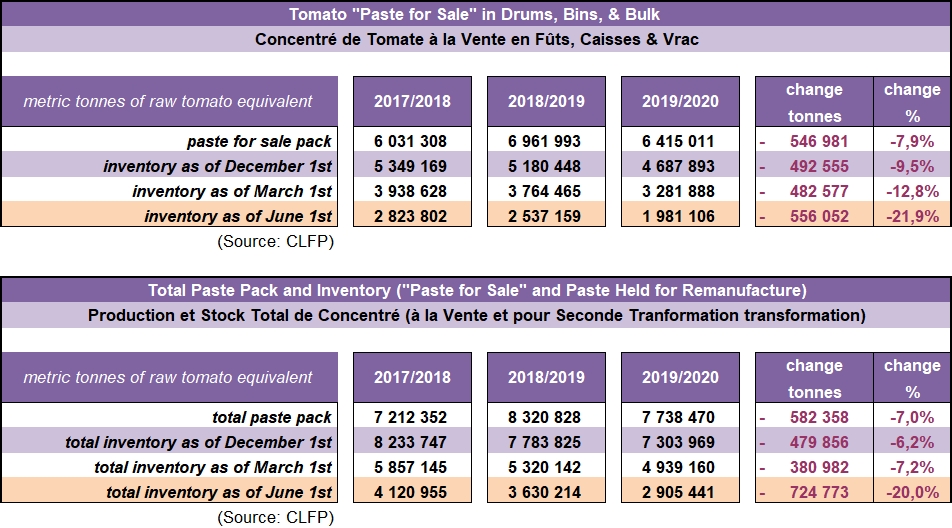 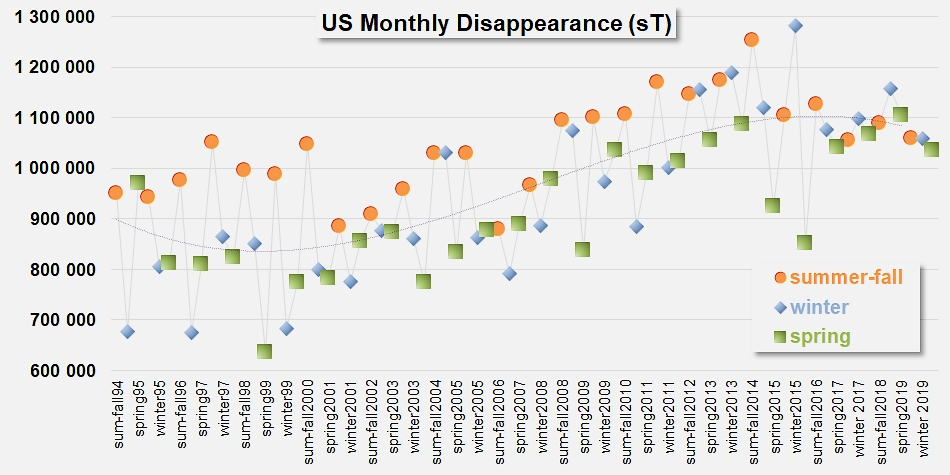 Charts and graphs from the CLFP report published 19 June 2020

This report is an estimate of total U.S. supply and demand for processed tomato products. Reports are based on voluntary pack and inventory reports provided by participating U.S. processors. All positions are stated on a "raw product tons" equivalent basis. CLFP "Pack Year" begins 1 June and ends 31 May.
2019-2020 pack year statistics are based on reports from processors handling 92.5% of U.S. tonnage. 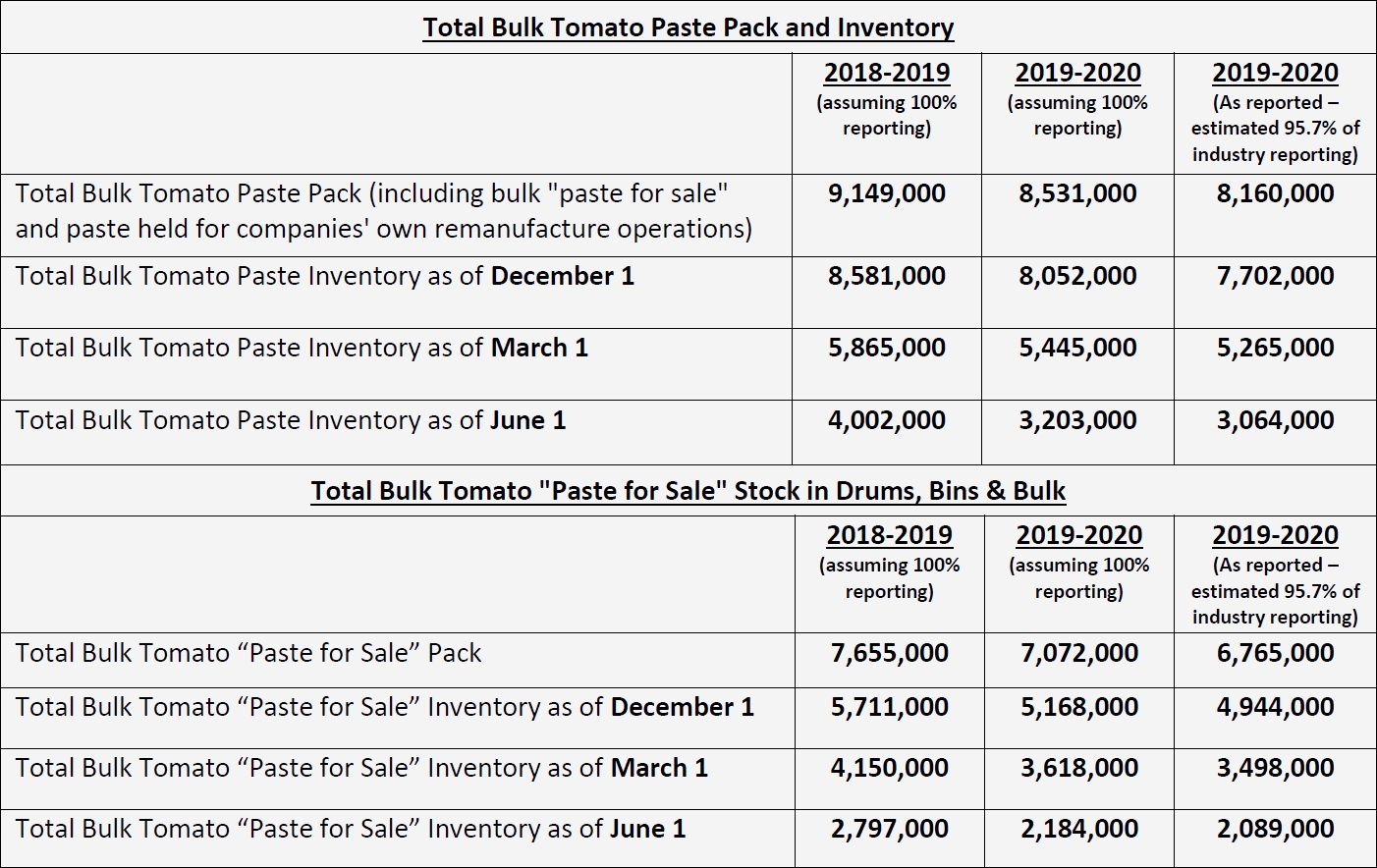 Bulk Tomato “Paste for Sale” – Bulk tomato paste, converted to a raw product “paid-for tons” equivalent, being held in drums, bins, and bulk, that has been packed to be sold. The estimates do not include bulk paste being held for companies’ own remanufacturing needs, or paste in food-service conditionings or retail/consumer package sizes.