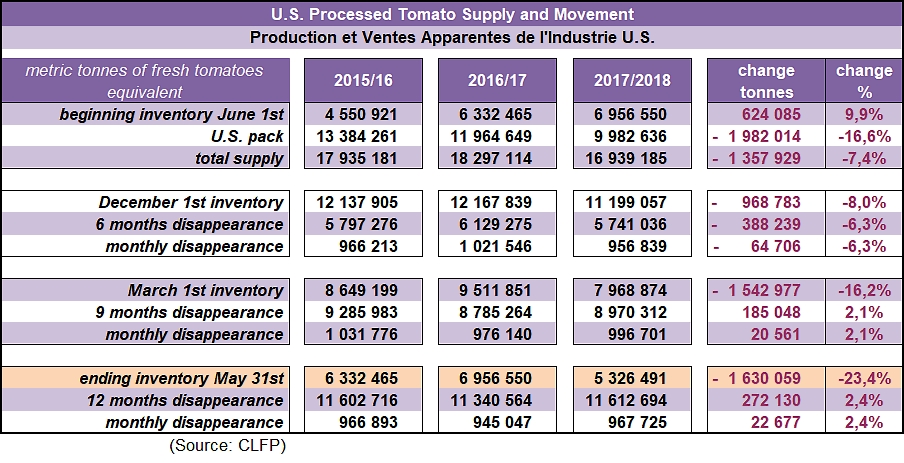 An overview of the past twelve months clearly indicates that US dynamics slowed during the 2017/2018 marketing year. Apparent disappearance was fairly sluggish during the first six months of the current marketing year (June-December 2017) and well below the levels of the first part of 2016/2017 (-6%), but it then went on to strengthen throughout the year, ending with 2.4% growth compared to the results of the twelve previous months. This growth remains modest, but it is real, and such low inventories had not been seen since June 2015 when the US industry was facing the commercial consequences of the consolidation of the USD against the EUR and the Chinese CNY. From a broader perspective, the situation as of 1 June 2018 and the improvement in stock levels should nonetheless be attributed more to a deliberate drop in operations on the part of Californian processors during the last season (-1.982 million mT) than to a recovery of consumption –  whether domestic or foreign – which is taking its time to occur.

The increase recorded for total annual sales of tomato products (from 11.34 million mT in 2016/2017 to 11.61 million mT in 2017/2018, an increase of +2.4%) has mainly been driven by sales of pastes to remanufacturing processors. While movements of paste for sale (mainly on foreign markets) dropped over the 12-month period by more than 3.5%, to 6.98 million mT, and movements of "other" products slowed by almost 5% to less than 2.95 million mT, the volumes sold to remanufacturing processors are reported to have jumped 68%, to 1.68 million mT, according to information provided by the CLFP.

In the final count, the decrease of stocks between 1 June 2017 and 1 June 2018 reached 1.45 million mT for pastes overall, of which 949 000 mT for products to be sold on foreign markets and 501 000 mT for products intended for remanufacturing on the domestic market. As for other product categories, the decrease amounts to slightly less than 180 000 mT in farm weight equivalent.

The most important aspect of this latest situation (and it is particularly encouraging for US processors) is to be found in the level of surplus products determined by volumes still available (although potentially already sold) and in the monthly apparent disappearance rate. As of 1 June 2018, surplus stocks amounted to about 2.42 million mT, a volume that is approximately two-and-a-half months of apparent consumption at current disappearance rates. These figures may seem impressive, but for a total US population that was recently estimated by the FAO at approximately 324.8 million people, current inventories only amount to about 16.4 kg/person, of which the surplus only amounts to some 7.5 kg of raw tomato. This is approximately the equivalent of 1 kg of 36/38 paste.
Getting rid of this surplus is the main difficulty that the US industry has been trying to overcome for the past three or four years, particularly in California, in a commercial context that has been slowed by the consolidation of the US currency. It is clear that once the foreign markets have absorbed almost one third of the volumes apparently consumed, the worldwide markets apply heavy pressure on US exports, to the point of making the domestic market a crucial focal point once again. 2017 and 2018 were marketing years that saw increased stability, with a domestic market / foreign markets ratio of approximately 70%/30%.

Currently available data does not allow a clear view of the respective contributions of domestic consumption and export shipments to total apparent disappearance, which is estimated by the CLFP at 11.61 million mT (12.8 million sT).

In these conditions, current dynamics have placed the rate of apparent disappearance on an annual trajectory of some 12.9 million sT (11.7 million mT), which is considerably higher than the official processing forecasts of 12.396 million sT (11.245 million mT) that were restated mid-June during the World Tomato Processing Congress. If nothing interferes with the results of production and processing, whether exported or consumed on the domestic market, US inventories and surplus volumes should record a notable decrease over the next twelve months, which are then likely to once again drop below the threshold of 5.5 million sT (4.9 million mT).

Some complementary data
Stocks and variations of stocks of paste-for-sale in industrial pack.

Bulk Tomato “Paste-for-Sale” – bulk tomato paste, converted to a raw product “paid-for tons” equivalent, being held in drums, bins, and bulk, that has been packed to be sold. The estimates do not include bulk paste being held for companies’ own remanufacture, or paste in food service or retail/consumer package sizes.

Stocks and variations of stocks of total volume of pastes (for sale and for remanufacturing).

Composition of US stocks of tomato products, as of 1 June, since 2012.

Situations on 1 June of actual and ideal stocks since 1994