27/01/2020 - François-Xavier Branthôme - Architecture of Trade - Lire en français
The situation is good, but it nonetheless requires a degree of caution

Analysis of CLFP data shows that in 2019, almost 73% of raw materials were used to manufacture pastes (including 12.5% intended for re-manufacturing) and 27% for other types of products.

The same report indicated that total inventories of US processed tomato products were recorded at approximately 10.75 million short tons (9.75 million metric tonnes), stated on a raw product equivalent basis, as of 1 December 2019. These inventories are 11.4% lower than those for the same period of the previous year (12.1 million sT, or approximately 11.0 million mT). This considerable drop is driven, on the one hand, by the favorable situation of carryover stocks on 1 June 2019 (down nearly 8% compared to those of June 2018) and, on the other hand, by a reasoned reduction of almost 9% in annual production volumes.

Not for the past ten years – since December 2008 – have there been such low end-of-year inventory levels (10.14 million sT or 9.19 million mT). Although the situation is healthy and encouraging, it is however necessary to put this intermediate result into perspective, as it also reveals a slight slowdown in the general dynamics of apparent consumption. While the quantities available for consumption (virtual quantities in stock + 2019 production, as of 1 June) decreased by 1.593 million sT (1.445 million mT), the volumes physically present on 1 December only decreased by 1.38 million sT (1.25 million mT), a sign of a measured weakening of demand. As the CLFP report indicates, "The apparent absorption of stocks of tomato products decreased by 3.2% against the equivalent period of the previous year, totaling approximately 6.35 million sT (or 5.76 million mT) during the six-month period from 1 June 2019 to 1 December 2019."

On the other hand, with totals reaching 13.074 million sT (or 11.86 million mT), sales over the last twelve months have still remained slightly higher (+0.6%) than performances for the period running January-December 2018. Since December 2017, over the last two years, apparent US sales have clearly rebounded, staying regularly above the symbolic monthly threshold of 1 million short tons (907 000 mT) and even rising over 2019 as a whole to about 1 million metric tonnes (1.102 million sT).

Trajectory of annual consumption
The result is a trajectory of annual apparent consumption of approximately 13.04 million sT (or about 11.83 million mT), on which the partners of the Californian and Midwestern processing industries can reasonably count in order to plan the quantities they should process (and therefore the surfaces to be planted) during the 2020 season. As the first announcements of processing intentions, which are generally available in January, had not yet been communicated at the time of writing this article, it can be surmised that the current theoretical quantity of 13 million sT is a threshold beyond which operations of the US industry in 2020 will once again contribute to increasing carryover stocks, thus weakening its commercial situation, and below which the products from the coming season may be insufficient to properly supply the domestic and export markets. This increases the risk of a shortage which many experts already consider as likely at the start of fall 2020 and even more so in summer 2021, if consumption rates continue as they are over the coming semesters.

It seems indeed that at the rate of apparent consumption recorded on 1 December, the coverage of requirements cannot be considered as being assured until the date of 1 October, generally considered by US operators as a benchmark for a fair balance between production and consumption. According to accepted criteria, the quantities physically present on 1 December can only supply markets until partway through September. Even if this approach remains dependent on many external parameters (climate, economy, competition, demand, etc.), the virtual surpluses of the US industry have not been as low since the end of 2014 and the beginning of 2015. It is therefore likely that tomato growers and processors in California and the Midwest will be keen to start the season as soon as possible and produce tomatoes in sufficient quantities to meet current demand and to replenish a minimum level of working stock, in line with the US and global business context.

Components of apparent US disappearance
In addition to the decisions made regarding the season's program and the progress of the preparation phases for the 2020 season, the outcome of the 2019/2020 marketing year and the context for the next marketing year will also depend to a large extent on the good performance of the components of apparent US consumption.
The dynamics of the past few months have been driven by a clear strengthening of domestic consumption, which has already been commented on in our previous analyzes of the US inventory situation, while foreign sales have continued to falter (see graph of monthly US paste sales in the appendices) in a global monetary context that has remained more favorable for European products than US ones. The combination of these opposite trends has ultimately led to significant reductions in stocks of tomato pastes, both those intended for sale (especially for export) and for remanufacturing.

Total bulk tomato paste stocks, including inventory held for remanufacture, were estimated at approximately 8.1 million short tons (7.3 million metric tonnes), on a raw product “paid-for tons” equivalent basis, as of 1 December 2019. For pastes overall, the situation on 1 December showed a decline of more than 6% in physical stocks compared to 1 December 2018.

The US bulk tomato paste-for-sale inventory on 1 December 2019 was approximately 5.2 million short tons (or 4.69 million metric tonnes), on a raw product “paid-for tons” equivalent basis. Like for pastes in general, a notable decrease of more than 9.5% has been observed in recent months in the quantities held in stock.

CLFP statistics reports are estimates, assuming 100% reporting, of the total US processed tomato supply, based on voluntary reports from processors throughout the United States. Participating processors handle approximately 92.5% of total US tonnage of processing tomatoes, and 95.7% of total US paste production.

These encouraging figures raise however some questions that could be further complicated by the final withdrawal of the Olam company from the Californian scene immediately after the end of the last harvest season and the reorganization of industrial capacities to take care of the resulting quantities "left vacant".
Thus, a very slight increase (+0.5%) in stocks of pastes intended exclusively for remanufacturing appeared in records for December, placing the level of stocks in line with those of previous years, but resulting in a significant drop in sales over twelve months (-20% from December 2018 to December 2019) in this specific sector, which is itself one of the driving components of domestic consumption. Similarly, total sales of pastes from December 2018 to December 2019 were 6% lower than those of the period running December 2017 to December 2018, as were sales of pastes in drums, bins and other bulk conditionings intended for sale.

Conversely, stocks of products other than pastes recorded a spectacular drop (-24%) against the situation of December 2018, the result of a significant increase in sales over twelve months, which has offset the slowdowns observed in the other sectors of activity and contributed to supporting domestic consumption. 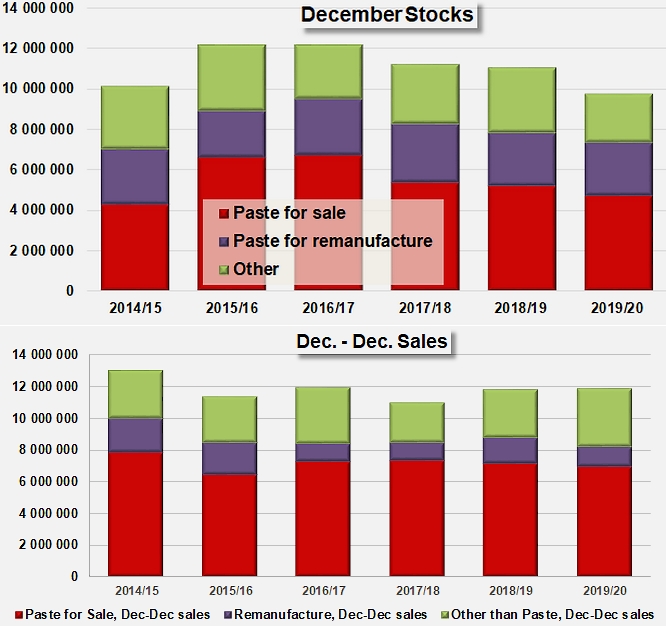 Some complementary data
US monthly exports of tomato pastes. 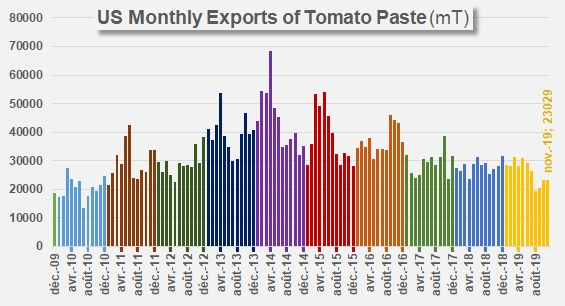 Available US inventories expressed in days of consumption 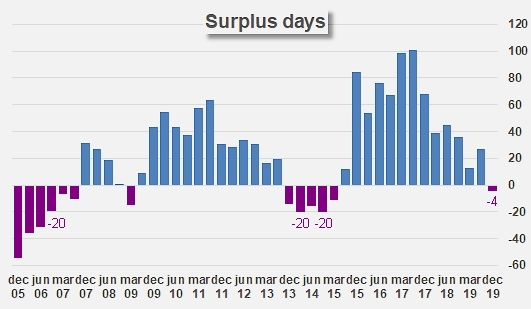