According to the report released in mid-January by the California League of Food Producers, total inventories of US processed tomato products amounted to approximately 12.1 million short tons (sT) (11.004 million metric tonnes (mT)), stated on a raw product equivalent basis, as of 1 December 2018.
Inventory is down 1.7% from the prior year level. Apparent disappearance of tomato stocks has increased 3.6%, totaling approximately 6.6 million sT (5.95 million mT) during the six-month period of 1 June 2018 to 1 December 2018, as compared to the prior reporting period (June-December 2017).

As a positive consequence of this recovered dynamic, the US industry now rests on a timid but real tendency to see stocks begin to shrink, but more importantly, it can program its next processing season by taking into account a clear decrease in surplus inventories. This surplus amounted to 1.15 million mT as of 1 December 2018, estimated according to the needs of the US market for the ten months to come (approximately 9.85 million metric tonnes (10.86 million sT) at the current rate of apparent disappearance), which is only just above one month of requirements and therefore represents a very reasonable level (see infographics at the end of this article) compared to those of the month of June 2017, for example (approximately one three-month period)...

In a detailed breakdown, the 8% recovery of apparent US disappearance seems mostly based on an increase in operations in the national paste remanufacturing sector, whose stocks have dropped by about 10% compared to December 2017, and on a notable increase (+22% compared to December 2017) in the sale of products of categories other than paste. It would indeed seem that the distribution of pastes intended for sale, particularly for the export market, was slightly less dynamic during 2018 (January to December) than it was in 2017. This result will need to be confirmed or adjusted in the coming months when the official results for US trade in 2018 are made available.

Apparent disappearance over the past twelve months absorbed 13.03 million sT (or 11.82 million mT) on a raw product equivalent basis. Pastes intended uniquely for sale accounted for 60% of this total, while pastes remanufactured internally accounted for about 14%, and other products for 26% of the total.

The situation on 1 December 2018 alters the prospects of the US processing industry. In this new context, current dynamics have the rate of apparent disappearance following an annual trajectory of close on 13 million sT (11.8 million mT), which is slightly higher than the one that was determined last July (12.9 million sT). While preparations for the next season are still ongoing, US operators, particularly in California, will certainly be bearing this figure in mind as they decide on processing targets for 2019. They will most likely also remain vigilant regarding the domestic and foreign components of apparent disappearance, as well as regarding the expected shifts in the exchange rate between the US dollar and the euro, which feature among the main parameters of the competitiveness of US products on foreign markets (see infographics at the end of this article).

Some complementary data
Evolution of surplus US inventories

Expected evolution of the EUR/USD exchange rate over 2019: according to the "Agence de Prévisions Économiques" (Economic Forecasts Agency), the USD could undergo a notable consolidation in coming months, a situation that is generally considered favorable to European exports. There are, however, many other conflicting projections on this subject, and we will remain vigilant in order to inform our readers of any decisive developments in the sector. 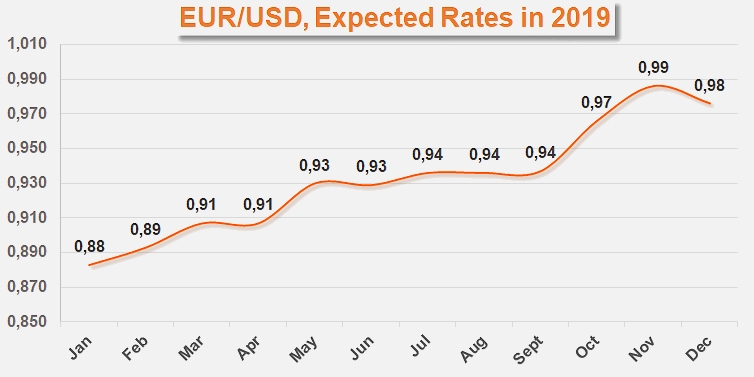 US Processed Tomato Inventories on December 1, 2018