12/02/2018 - François-Xavier Branthôme - Lire en français
Over the past twelve years, despite the instability of the political context, of the economy and of market competition, Ukraine's tomato products sector has evolved from a situation of being dependent on imports to becoming a worldwide Top10 export player in the sector, on a level with Chile, Turkey and Iran.
This spectacular evolution is the result of impressive growth, at the exceptional rate of a 21% increase per year in the quantities harvested and processed by the country's tomato industry over the past decade. In 2007, Ukrainian operators processed 85 000 metric tonnes (mT). Last year, 650 000 mT of raw materials were processed and industrial forecasts are continuing to increase this year, reaching 730 000 mT to date for the 2018 season.
This increase in volumes, for which a number of processors had been hoping, has resulted from an extension of planted surfaces dedicated to growing processing tomatoes (from 6 800 hectares in 2010 to 8 500 hectares in 2016) and from a notable improvement in crop yields (from approximately 40 mT/ha in 2010 to 90 mT/ha in 2016). Mention should also be made of the progress accomplished by Ukraine in terms of its infrastructures in the areas of energy use, road transport, etc. The financial aid granted by the European Union and the influx of foreign capital (USD 1.5 billion over the first semester 2017 alone), have strongly contributed to this development.

Almost all of the agricultural production and industrial processing is located in the regions of Mykolaiv, Kherson, Kakhovka and Skadovsk, in the South of the country, along the Mediterranean coastline. In recent years, most of the growth in processing operations has been achieved by the companies Inagro (Agrofusion, about 80% of the volumes processed), Chumak (about 9%) and Sandora (4%). According to local sources, other companies also operate in the same product sector, particularly in the region of Kherson and, to a lesser extent, in the region of Odessa. Between 2015 and 2017, the volumes contracted by the Ukrainian industry as a whole increased by 18% (from 609 000 mT to 718 000 mT). Over this period, the volumes contracted by Inagro were practically the only ones to noticeably increase (from 471 000 mT to 596 000 mT, +27%). 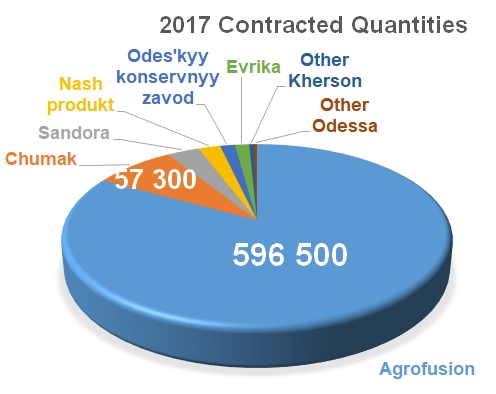 Abroad, Ukraine is committed to an association agreement with the European Union, and has signed free-trade agreements with the European Free-Trade Association (AELA (Switzerland, Norway, Iceland and Liechtenstein)), with the CIS (ex-USSR) as well as with Montenegro, Former Yugoslav Republic Of Macedonia, Georgia, Azerbaijan, Uzbekistan, Tajikistan, Turkmenistan and Canada.
The revenue stemming from exports of agricultural produce amounted to USD 15.4 billion (slightly less than EUR 14 billion) in 2016, a 4.5% increase against 2015 results. Agricultural exports represented 42.5% of the total revenue from Ukrainian exports in 2016. Wheat (18 million mT), maize (17 million mT), sunflower and barley (4.8 million mT each) are the main agricultural exports, along with soy, sugar, beans, meat, etc. Asian countries absorb most of Ukraine's foreign sales (46%), followed by the EU (27%), Africa (16%) and the countries of the CIS (Russia, Kazakhstan, Armenia, etc.).

Exports of tomato products only account for a small fraction of total revenue: the development of foreign sales, momentarily penalized by the Russian embargo, has only progressively been paralleled by a slowdown in imports from Europe (Italy, Spain, Portugal), from China and from Turkey. In 2016/2017, net revenue in this sector was recorded at close on USD 37 million, a 17% increase on the revenue of 2015/2016 (USD 31.5 million) and a 140% increase on the revenue of the period running 2013/2014-2015/2016.
Previously, foreign sales were very dependent on the Russian market, which absorbed between 60% and 90% of the tomato products exported by Ukraine until 2013/2014, but market outlets are now widely diversified in terms of geographical destinations, even if the Ukrainian trade context remains limited to the surrounding region (Poland, Germany, Belarus, Moldavia, Czech Republic, etc.). Ukraine has become the main supplier of tomato paste to Poland: Ukrainian pastes account for about one third of the 70 000 tonnes imported each year by Poland.

In 2016/2017, Ukrainian paste imports did not exceed 600 tonnes, which is approximately the same
volume that the country exported in the years immediately following the dislocation of the USSR.
Sources: Inagro, IHS, Tomato News 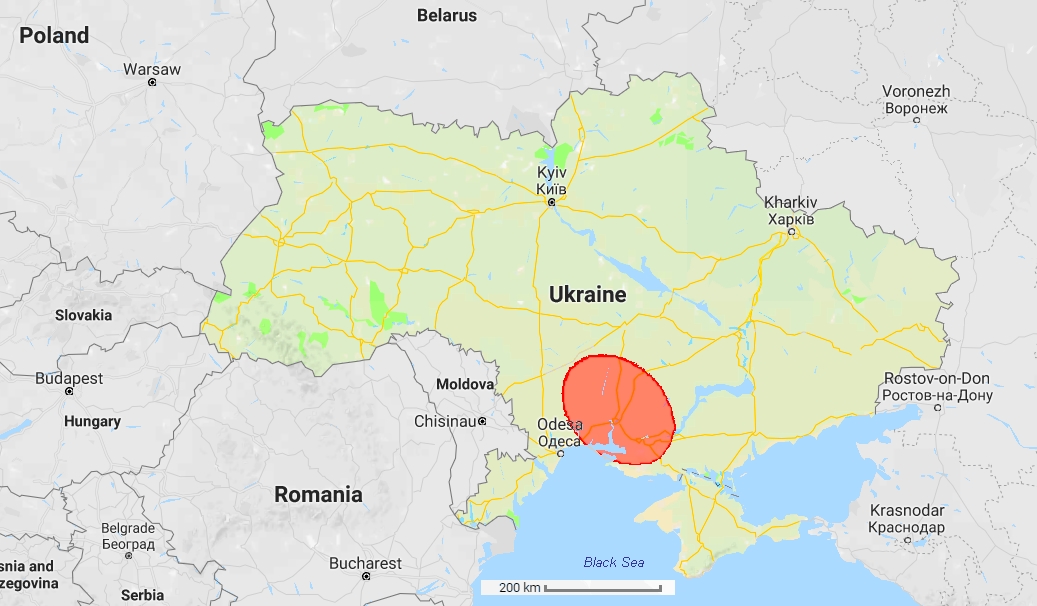