22/11/2019 - François-Xavier Branthôme - Read in French
The 2018/2019 financial year recorded a significant decline in export shipments, in a context that is becoming increasingly restricted both geographically and in terms of segmentation.

Penalized by several years of decrease in processed volumes and large variations in raw material prices, Turkish exports of tomato paste have, for the past few years, hovered around an average of approximately 135 000 tonnes of finished products, with a slump in 2014/2015 (less than 112 000 mT) and an exceptional increase in 2017/2018 (more than 162 000 mT). These uncertainties have not prevented Turkey from positioning itself, over the past ten marketing years, in sixth or seventh place in the world ranking of paste-exporting countries, between Iran and Chile.

Last year (2018/2019), in a context of very tense international competition, the Turkish performance in terms of paste exports was unable to exceed 124 000 mT, and was limited in volume by a drop in the quantities available for export resulting from a succession of decreases in processing operations (1.3 million mT for the 2018 season against 2.7 million mT in 2015 (see appendix)). This result was nearly 24% lower than the previous year (2017/2018), a decline that should be put into perspective, as the previous performance was unusually high. On the other hand, the three previous financial years (from 2015/2016 to 2017/2018) ended with results averaging 148 000 mT, which is 16% more than last year. On this basis and that of the significant increase in the quantities processed during the 2019 marketing year, it should be expected that Turkish foreign sales of pastes in 2019/2020 (and beyond) will probably be boosted, also driven by the uneasy tension between global demand that is growing (though very slowly) and the increasingly reduced availability of processed products as the month of June 2020 approaches. 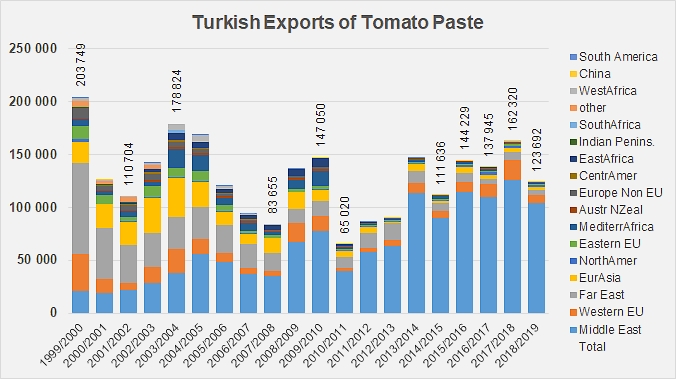 Regional export patterns highlight a growing focus on the Middle East.
For now, the geographical limitations of Turkish operations result from the gradual fading away of formerly important countries in the Far East (Japan, Malaysia, South Korea), Europe (Germany, United Kingdom, Netherlands, Italy), Eurasia (Russia), and the rise of the Iraqi market, occasionally supported by irregular sales on the Syrian, Saudi and Omani markets. In just a few years, the Middle-East region has become, if not the only one, at least the main client for pastes produced by the Turkish processing sector: while it drained in the early 2000s only a little more 14% of Turkish sales with less than 21 000 mT per year, the Middle-East now accounts for more than 80% of the trade flow from Turkey, with tonnages that hover between 110 000 and 115 000 mT annually.

Over the 2018/2019 marketing year, the decline in external sales was mainly felt in the country’s two main outlet regions.
In the Middle-East, despite the good performance of Iraqi purchases (+11% and 9 400 mT) compared to the average of the three previous marketing years, the drops recorded on the Syrian, Saudi, Kuwaiti, Omani, etc. markets resulted in an overall decrease of almost 13 000 tonnes of exports, particularly in the 12° to 30°Brix paste segments in industrial packs (customs codes 200290310000 and 200290910000).
As for the proportion intended for the western EU, the decline in external sales only concerned 6 200 mT of products but represented a 45% decrease compared to average performances over the three previous marketing years. The destinations in question were mainly Germany and the Netherlands.

The increasing commercial polarization – or dependence – of Turkey's external activity on a few local markets is compounded by a growing focus in terms of segmentation. In the space of twenty years, pastes between 12° and 30°Brix (200290310000) and more than 30°Brix in industrial packs (200290910000), which made up a major proportion of shipments in the early 2000s, have seen their importance drop sharply and sometimes almost disappear from the Turkish supply offer, being gradually and massively replaced by products from 12° to 30°Brix in retail packaging and food-service conditionings (200290390000). These formats accounted for more than three-quarters of the quantities shipped last year, while other categories (200290310000 and 200290910000) respectively "weighed" only 17% and 3% of total operations. 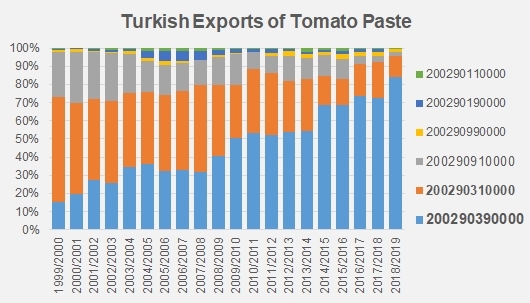 Signaling a break in the dynamics of production and supply within the country, and consistent with the drastic reduction of processed quantities, the Turkish authorities announced in January the institution of a tax-free import quota of 25 000 mT of products, limited in time to 31 May this year and reserved for processors needing to reprocess paste as a raw material for the production of other products.
So just over 25 000 mT of paste entered Turkish territory in just under three months (from March 1 to May 31), shipped in from the United States (8 480 mT), Chile (7 410 mT), China (6 820 mT), Kazakhstan (1 100 mT), Spain (1 000 mT) and Ukraine (250 mT).

Revenue from paste exports, like quantities, has been slowly declining for several years. In 2018/2019, the total value of external sales of pastes amounted to USD 155 million, slightly higher than the previous year's result (USD 150 million) but a fairly significant decline (-5.2%) compared to the average of the three previous years (approximately USD 164 million). 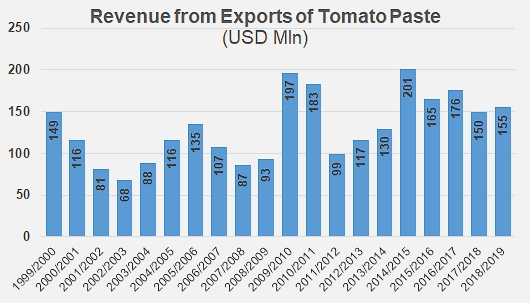 Some additional data
Quantities processed in Turkey are subject to wide variations due to weather conditions, raw material prices and competition from the table-tomato market. 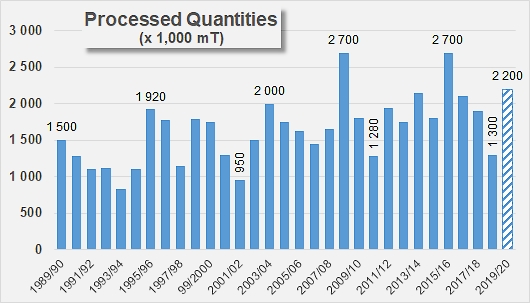 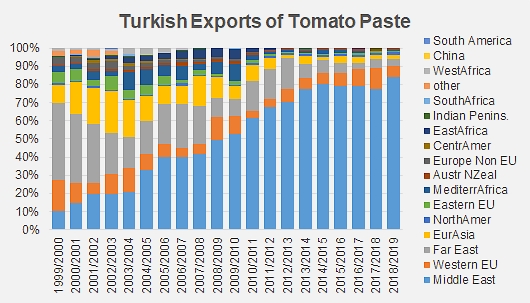 Evolution of the segmentation of Turkish exports of pastes over the past twenty years. 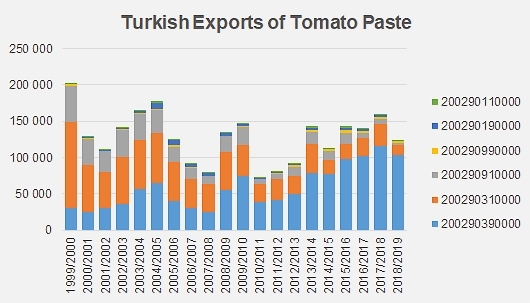 A partial overview of the Turkish industry