The 2018 season: major worries regarding the water situation

Just as several major urban centers around the world are wondering how to better manage their water resources and the city of Cape Town has expressed concerns about being the first to implement drastic water rationing (likely during spring 2018), Californian agricultural operators are figuring out the lessons to be learned from the major water crisis that they hope to have put behind them, and European ones are already preparing for a summer season that is expected to be difficult.

In Europe, processors were already stating at the beginning of January how concerned they are about the possible impact of water scarcity on volumes to be processed, on the quality of the crop and on the actual operating procedures of processing installations. Everywhere, operators are considering the implications and effects of constraining policies on the management of this essential resource.
In south-central Italy, the situation has reached extreme conditions, with a rainfall deficit of more than 50% compared to a normal year. The industry is particularly concerned about the very low level of reservoirs and the consequential risk of reduced irrigation water. 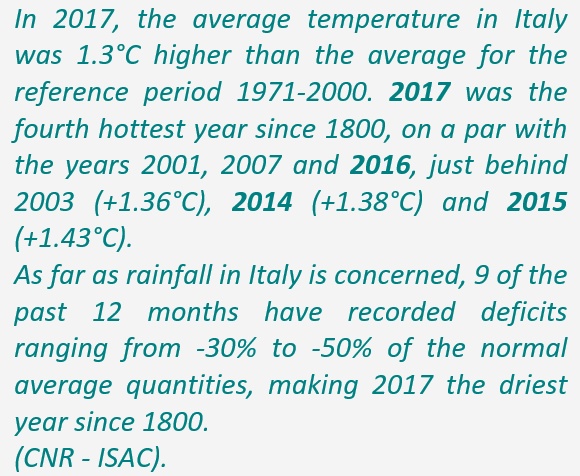 In Spain, the low availability of irrigation water is a major cause for concern in Andalusia, and to a lesser extent in Extremadura. According to the AEMET national meteorology agency, rainfall was virtually nonexistent in the region of Seville in September and October (less than 20% of normal rainfall) and rains in November were 68% lower than the normal average. "This fall has been the driest of the century, and rainfall in 2017 has been 59% lower than normal," stated one Seville daily newspaper. Among other reasons, this situation has led the Spanish industry to consider drastic reductions in its harvest operations.

The drought that is affecting Portugal became even worse in October. It has hit the three main water basins of the country (Douro, Tejo and Guadiana) and all of the territory of continental Portugal, of which 75.2% are now suffering from circumstances of extreme drought and 24.8% are suffering from severe drought. The month of October was the hottest for the past 87 years, with average temperatures that were 3° higher than normal.
According to local operators, "rainfall levels over the past 12 months have been 30 to 40% lower than normal and the month of January only saw 50% of the normal rainfall for that month. Unless significant rain falls between now and the end of February, planted surfaces will need to be reduced; the low availability of irrigation water will lead to a drop in harvest volumes."

Percentage of normal rainfall in southern Europe between September and December 2017
In his report regarding winter 2017/2018, meteorologist Éric Leister (Accuweather) explains that "Mediterranean regions in southern Europe have not enjoyed the rainfall that could relieve the major drought crisis that has been hitting Portugal, Spain, Italy and the Balkans in recent months. […] Italy is divided between two extreme scenarios: the south-central region, which has suffered persistent drought, and the north, which could be affected by waves of intense cold weather, but only in the second part of the season."

Nonetheless, the main worry remains "this century's worst drought" in the Mediterranean region. "This does not mean that there will be no rainfall in the region during the winter months, but it is likely to be lower than normal, which will aggravate the persistent drought during summer 2018, leading to an extremely worrying scenario," added the American expert meteorologist Alan Reppert. 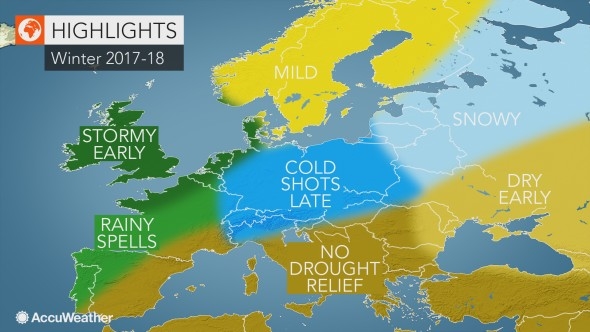 In South Africa, the drought that has been affecting the region of the Western Cape has led processors to downscale their harvest forecasts by 11%. "We are experiencing the worst ever drought in nearly a hundred years. Our dam […] filled up to 41% in the beginning of October. Normally it is a 100% full in October. Our rainy season lasts more or less from May to September, during our winter time, and water allocations are decided in October according to the dam situation. Instead of getting the 12 000 cubic feet (340 m3) they need this year, growers will get only less than two thirds (7 000 to 8 000 cubic feet (200-225 m3))." the situation is also extremely difficult for growers, including those who use sensors and drip irrigation systems. Irrigation water allocations have been fixed this year at 1 700 ft.³ (48 m³) per hectare, whereas needs are generally estimated to be approximately 5 500 ft.³ (156 m³) per hectare for growing tomatoes.
In this context, “Pioneer Foods decided under the circumstances they cannot open the factory in our region”, which represents a loss for the local economy of approximately EUR 4.5 million. “The Coega Concentrate factory in Port Elizabeth is trying to start up again. Despite a bit of water shortage, the company hopes for 20 000 tonnes this year, and next year they will try for 40 000.  [It seems that there is no particular problem for] Pioneer's factory in Messina up north, which is a rainy area in summer time."

The year in the above figures is taken to be between November and October. This is because October is more or less the end of the rainy season, and the last month when an increase in dam levels may be recorded. 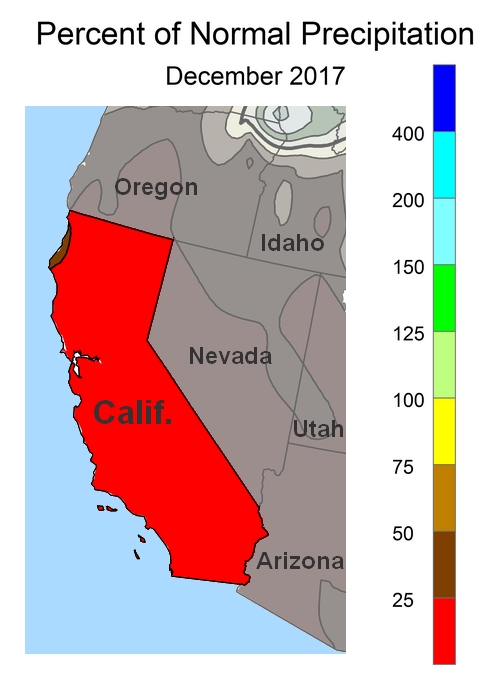 Percentage of normal rainfall in California, in December 2017.

In California, processors are reporting the following situation:
“Rainfall is below normal for this time of year. Currently, rainfall to date is at 67% of normal and about 35% of season total in the northern California region. In central California, rainfall is at 39% of normal to date and 19% of season total. In southern California, rainfall is at 38% of normal to date and 20% of season total.
It is important to note that the majority of Californian rainfall comes during January, February and March.
Snowpack in the Sierra Nevada Mountains is improving as many of the recent storms have provided more snow than rain in the Central Valley.
Storage in the major reservoirs is as follows: Shasta Dam - 73% of capacity with inflow at 7 873 cubic feet per second (CFS), outflow at 3 847 CFS. Orville Dam - 39% of capacity with inflow of 5 509 CFS, outflow 1 892 CFS. New Melones Dam - 82% of capacity.
State water agencies have said they will have a 10% allocation so far. This may change as rainfall and snowpack improve. Federal water agency will not make their water allocation until March.
The tomato growers have other sources of water that were developed during the recent drought. Their use of ground-water was greatly reduced during the 2017 season, which allowed the aquifer to recharge. There should be sufficient water to meet the demands for the 2018 tomato crop”.

The situation regarding water resources in the other main regions for growing and processing tomatoes is presented below.

Percentage of normal rainfall in North Africa, between September and December 2017.

Percentage of normal rainfall in the Middle East, between September and December 2017.

Percentage of normal rainfall in South America, between September and December 2017.

Percentage of normal rainfall in countries of the ex-USSR and the Xinjiang region of China, between September and December 2017.