20/09/2018 - François-Xavier Branthôme - Architecture of Trade - Read in French
Can the leading industries be content with just 1% growth?

With the end of the first term of the 2018/2019 marketing year approaching fast, the communication black-out that the Chinese government has imposed since last April regarding its monthly trade performances has been an issue for the industry's decision-makers. Although a few rare indications of prices were available for the first few weeks of the current year, no reliable information has been available concerning trade estimates for the last months of the 2017/2018 marketing year. And this uncertainty regarding the performance of the world's primary exporting country for tomato paste naturally affects worldwide results.
Over the past six marketing years, the Chinese industry's exports have decreased regularly, from 1.17 million metric tonnes (mT) of finished products in 2011/2012 to less than 856 000 mT in 2016/2017. Over the first nine months of the 2017/2018 marketing year, close on 668 000 mT of products (tariff codes 20029011, 20029019 and 20029090) were shipped abroad. If operators keep up this export rate, it will take the year's Chinese export total to about 890 000 mT. For the sake of caution, we will consider that the last officially known result (884 700 mT, for the 12 month period running March 2017 to March 2018) is a coherent basis for appreciating the Chinese performance over the 2017/2018 marketing year. Production levels for the 2017 season in China (6.2 million mT processed) also make this approach plausible, along with the very aggressive Chinese price policies of recent years.

As things stand, the volumes exported around the world over the past marketing year are likely to have slightly exceeded 3.248 million tonnes of paste (finished products), which is a slight progression (+1.05%) compared to the 3.214 million mT of paste exported in 2016/2017. At a global level, this gain of 33 000 tonnes, which is small if not negligible, is clearly insufficient to meet the requirements for increasing the profitability of the worldwide industry. 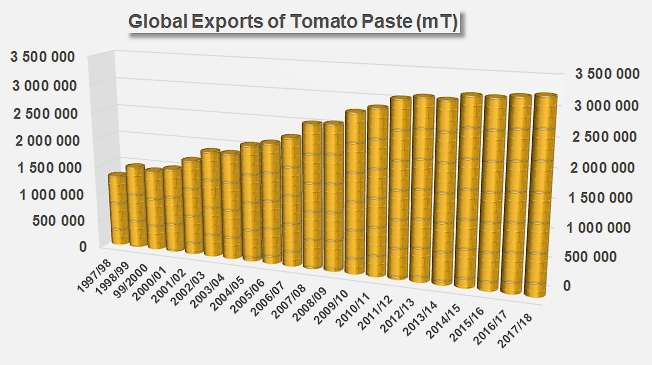 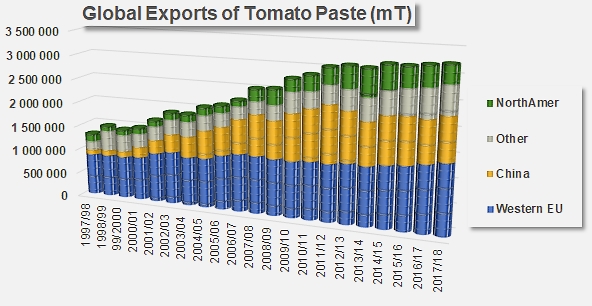 In summary, it would appear that exports from the group of countries that make up Western Europe (mostly shipped by the leading industries of Italy, Spain and Portugal) have been practically the only ones – among the main processing regions worldwide – to pursue their development in the difficult context of recent marketing years, partly thanks to their gain in competitiveness resulting from the EUR/USD exchange rate.
Indeed, China's foreign sales went through a period of spectacular growth at the beginning of the 2000s, followed in recent years by a relative decrease in the vitality of foreign trade. Export volumes have increased at an annual rate of 11.5% overall for the past two decades, with an initial period that was "explosive" (CAGR 19%) until 2011/2012, followed by a period of notable decline (CAGR -4.5%). Over this same period of 20 years, US foreign sales progressed at an average rate of 4.5%. From 1997/1998 to 2011/2012, annual growth reached 4.9%, but the difficulties affecting foreign markets brought this dynamic back to 1.5% over the past six marketing years.
At the same time, export results for European industries developed at an average annual growth rate that was less spectacular, closer to 2.5%. Early results saw foreign sales for the period running 1997/1998 to 2011/2012 grow at an average annual rate of 2.3%. But unlike Chinese or US trade dynamics, European exports have continued to grow at a rate of 3.2% per year from 2011/2012 until the latest marketing year 2017/2018.

The undeniable development pattern of worldwide exports over the past 20 years must now also take account of a fourth production zone that is mainly made up of four processing countries whose trade context had until recently remained focused on their neighbors within a limited geographic range. The volumes recorded by Turkish, Ukrainian, Iranian and Chilean exports of paste represented an average over the past three marketing years of slightly less than 470 000 mT of finished products per year. These volumes have been complemented by other processing countries, reaching a total annual volume of finished products that has exceeded 555 000 mT on average over the past three marketing years. 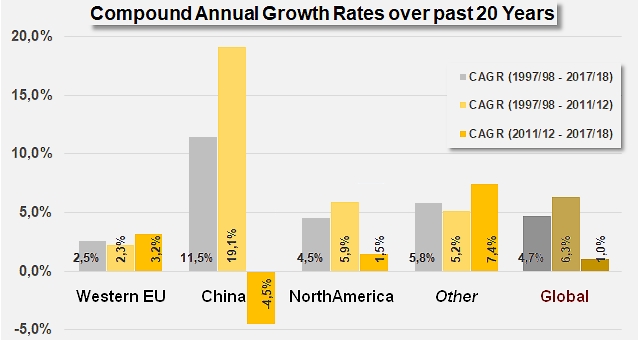 Over the past 20 years, paste exports in this disparate group have developed at the impressive rate of 5.8% per year. Until 2011/2012, foreign sales grew by more than 5% per year. After that decisive year, an acceleration was observed in the annual growth rate of exports for this group of countries that are outside of the three major processing regions: over the past six marketing years, annual growth has reached 7.4%.

In coming years, it is not impossible that competition between the European, Chinese and US production regions may be disrupted by the emergence of one or more countries of this group – possibly even all of them. The traditional production zones, which are already competing against each other and facing the issue of shrinking outlets due to the emergence or development of local operators, are also going to have to take account of the capacity shown by some of these industries to claim their share of the worldwide tomato paste market.

Some complementary data
Estimated distribution of global exports of paste in 2017/2018 (Other = Turkey, Ukraine, Iran, Chile, other). 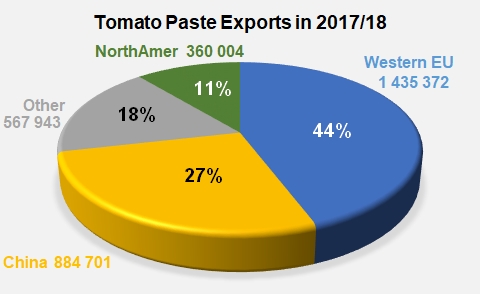 Comparative evolution of the volumes of paste exported by the world's main processing regions (Other = Turkey, Ukraine, Iran, Chile, other). 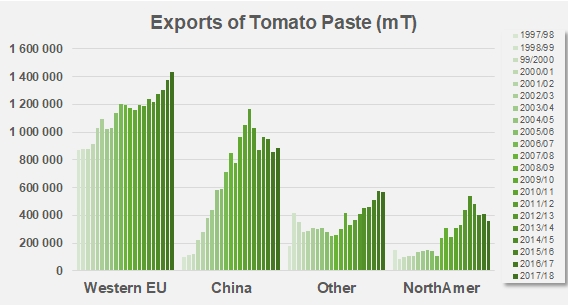