18/10/2019 - François-Xavier Branthôme - Lire en français
Russia is no longer as dependent as it once was
Inspired by the presentation by Anton Sidorenko at the Tomato News Conference held in Avignon in May 2019.
Russian expenditure on imports of tomato products has decreased considerably in recent years. The domestic demand for processed products has been increasing regularly, as demonstrated by the food industry production data presented last May during the Tomato News Conference. But this demand is increasingly met by products that have been manufactured within Russian borders, therefore requiring dwindling volumes of products from abroad, a pattern that is set to continue. 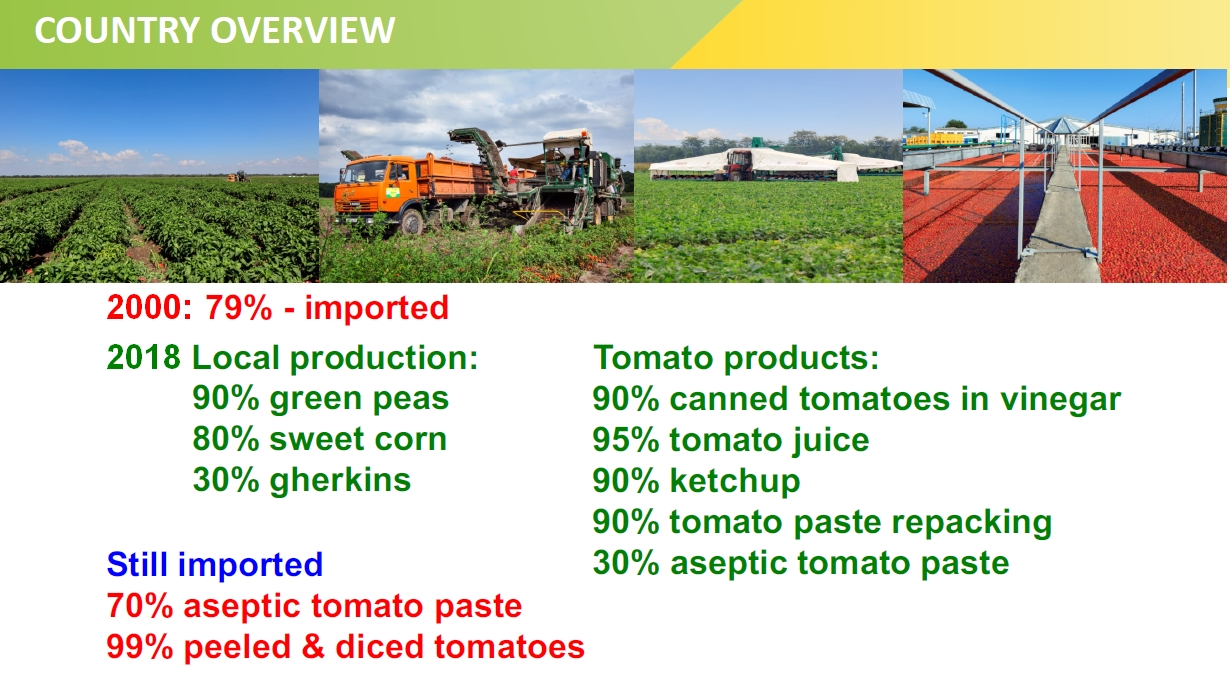 Russia hopes to develop consumption and production
Anton Sidorenko (Desan) explained: "Over the past five years, and particularly in 2015, three factories were built simultaneously in the three main tomato production and processing regions of southern Russia, in Volgograd, Astrakhan and in Kabardino-Balkaria. In 2019, 7 000 hectares were planted in order to supply the needs of these factories. On the basis of expected yields (from 60 mT to 80 mT/ha, possibly as much as 100 mT), production prospects amount to approximately 560 000 mT. The Russian industry expects to produce 65 000 mT of pastes (amongst other products), with national consumption estimated at approximately 140 000 mT." 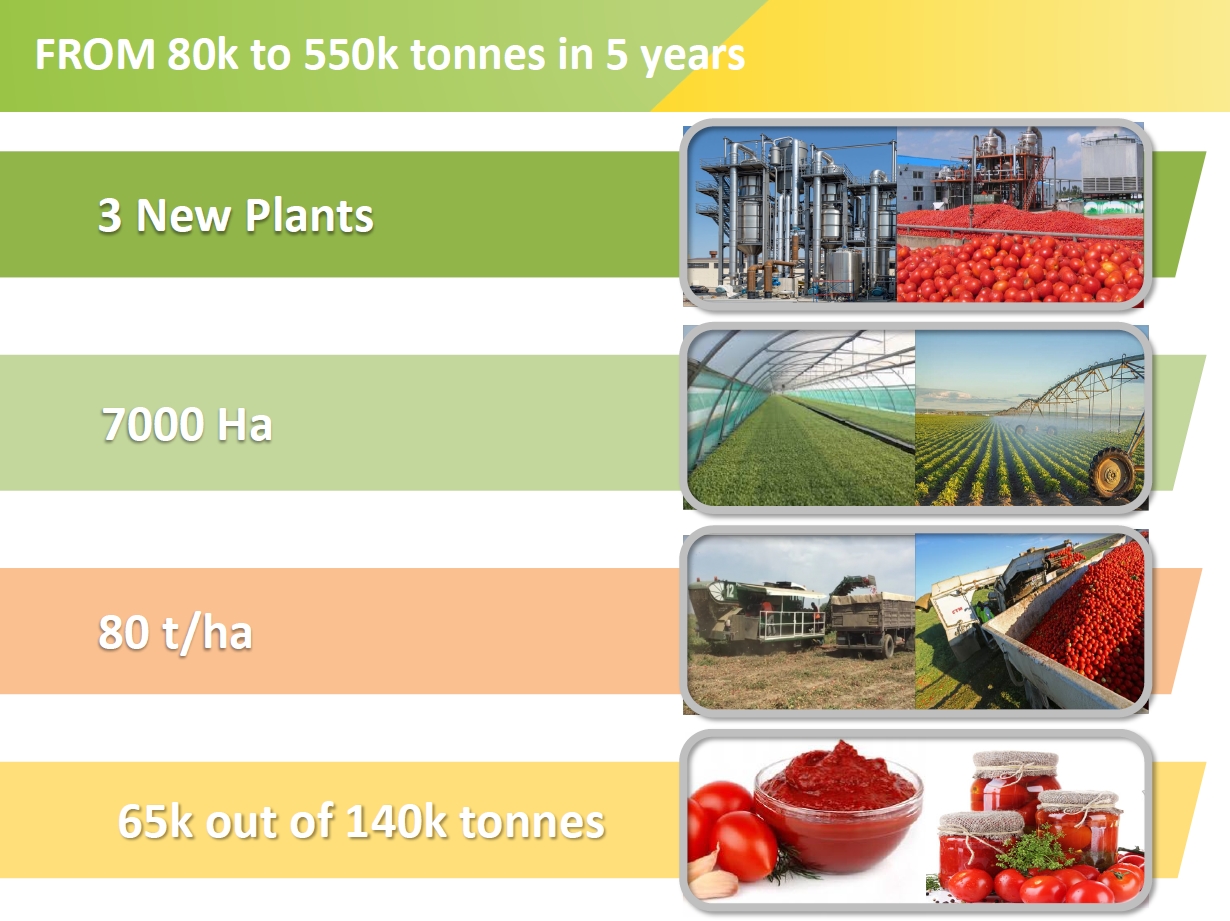 A notable drop in Russian imports
After reaching a peak in 2013/2014 with expenditure amounting to approximately USD 200 million, the total value of imported Russian supplies of pastes, canned tomatoes and tomato sauces has been dropping at a rate of 9% per year over the past six years, and only accounted for slightly more than USD 121 million during the 2018/2019 marketing year. The drop in prices paid for tomato products, driven by increasingly intense global competition, has contributed to this decrease in the Russian invoice for imports, particularly for paste supplies, which are the main item of foreign purchases. But the main driver of the drop in Russian expenditure remains the growing autonomy of the Russian market with regards to imports of foreign products, a factor that is increasingly enhanced by consumer preference for nationally produced products. 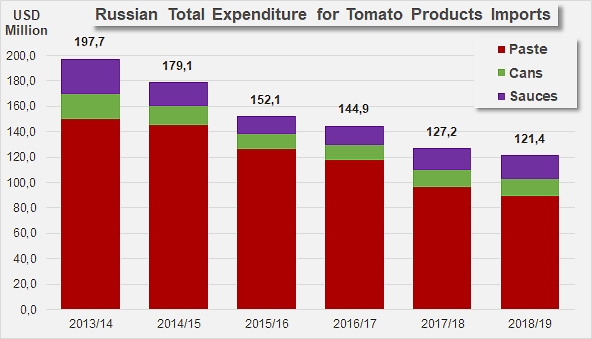 Over the past six marketing years, amounts spent on buying foreign products have decreased at a rate of 9% per year.
The drop in volumes of tomato paste imported by Russia is spectacular. Between 2013/2014 and the most recent marketing year, annual volumes have decreased from close on 148 000 mT to less than 116 000 mT of finished products, which is a drop of almost 32 000 mT (22%). Chinese operators, who are the main suppliers of the Russian market in this category (62% of the total over the past six marketing years) have suffered the brunt of this development strategy on the part of the Russian industry, with a decrease in their export volumes of more than 20 000 mT between the period running 2015-2018 and the 2018/2019 marketing year. During the same period of time, shifting patterns of Russian supply sources have affected (to a lesser extent) trade flows from Spain (-4 600 mT, approximately -45%), from Chile (-3 700 mT, -61%) and from Iran (-2 900 mT, -73%), whilst products of other origins have moderately benefited, like those from the US (+4 000 mT, +48%), from Kazakhstan (+2 700 mT) and from Italy (+1 800 mT).
Over the past year, the value of Russian imports of pastes amounted to USD 89.9 million, which is 21% less than the average of the three previous marketing years.
This reorientation of Russian supply patterns has also resulted in a shift in the distribution of imported product categories. The drop in volumes has mainly affected pastes of more than 30°Brix and those with a soluble solids content between 12 and 30°Brix, intended for industrial use or for the catering industry (2002909100 and 2002903100), as well as 12-30°Brix pastes intended for the retail market (2002903900). Significant increases have, on the contrary, been recorded for other product categories (pastes of less than 12°Brix).
In 2018, the Russian industry processed just under 500 000 mT of tomatoes, which accounted for approximately 50% of its national demand for aseptic paste. In just a few years, the Russian industry has considerably developed its processing capacities, increasing from 19 000 mT in 2015 to 550 000 mT for the 2019 harvest. A major proportion (70%) of the demand for aseptic paste is still dependent on imports, whose decrease in coming years remains a primary target for the Russian industry. 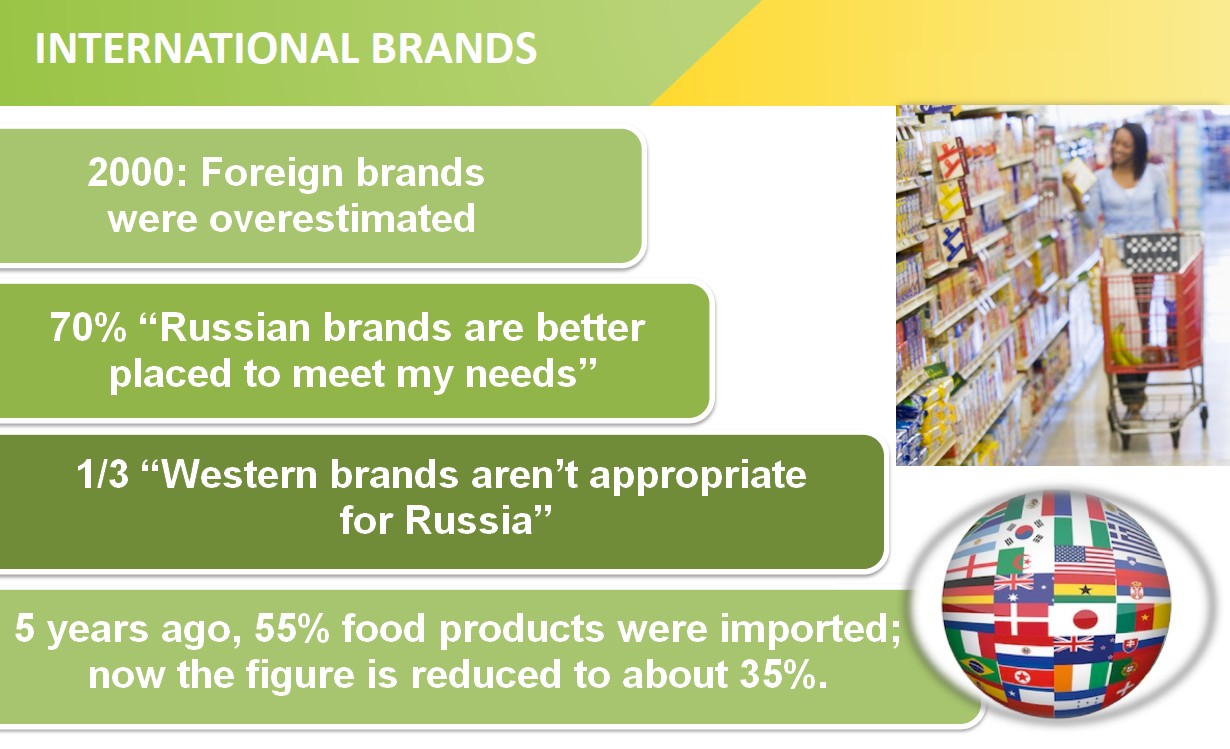 Source: presentation by Anton Sidorenko, Tomato News Conference 2019, Avignon
Sauces & Ketchup: a well-controlled market
The potential for growth of the Russian sauces sector is far smaller, as the national industry already satisfies about 90% of consumer demand, according to the information presented by Mr. Sidorenko.
While Russian imports of sauces and ketchup remained close to 130 000 mT per year in 1997/1998, they rapidly declined until 2001/2002 (less than 18 000 mT of products). But over the past 18 marketing years, the volumes imported annually have varied only slightly, between 15 000 mT and 29 000 mT, around an average of approximately 22 000 mT. The main suppliers of the Russian market for sauces and ketchup are Vietnam, Italy, Ukraine, the Netherlands and South Korea.
Russian expenditure on supplies of sauces and ketchup for the latest marketing year amounted to USD 18.4 million, a 19% increase compared to the average of the three previous marketing years. 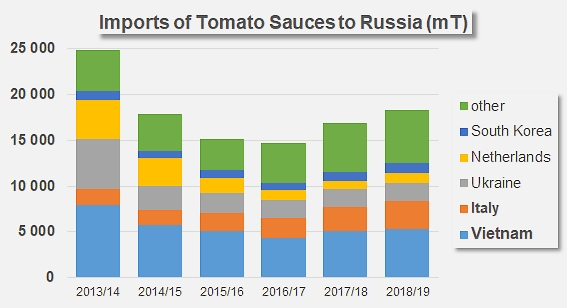 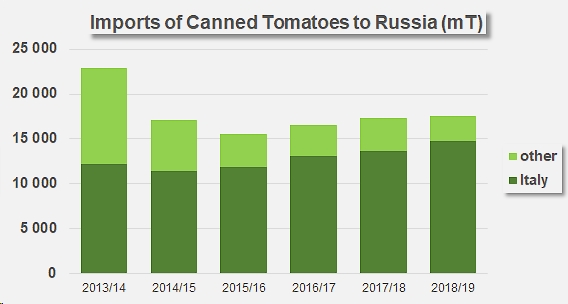 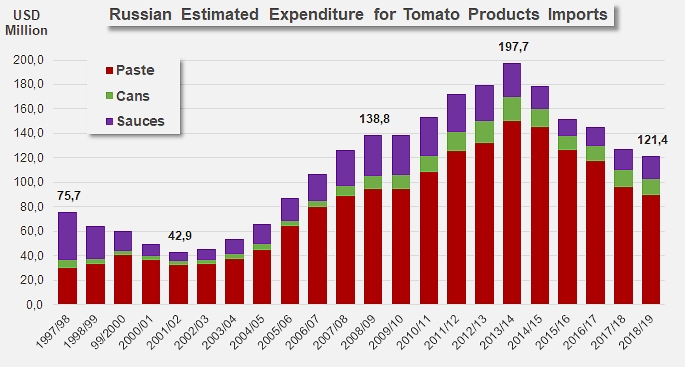 Evolution of the estimated total value of Russian imports of tomato products over the past two decades. 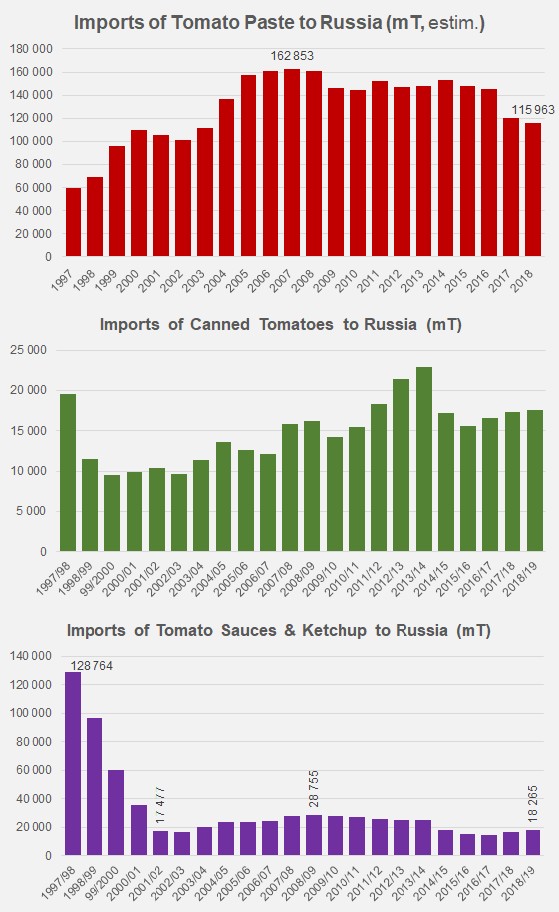 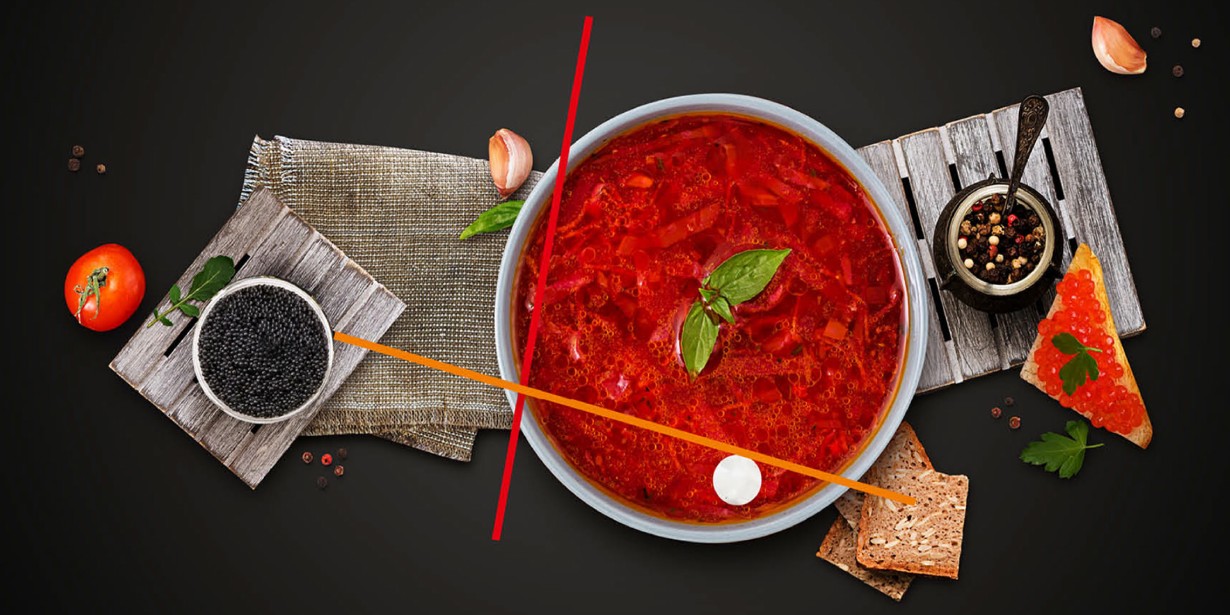