07/11/2019 - François-Xavier Branthôme
Based on the presentation by Manuela Barzan during the Tomato Day held in Parma, as part of the Cibustec, 24 October 2019 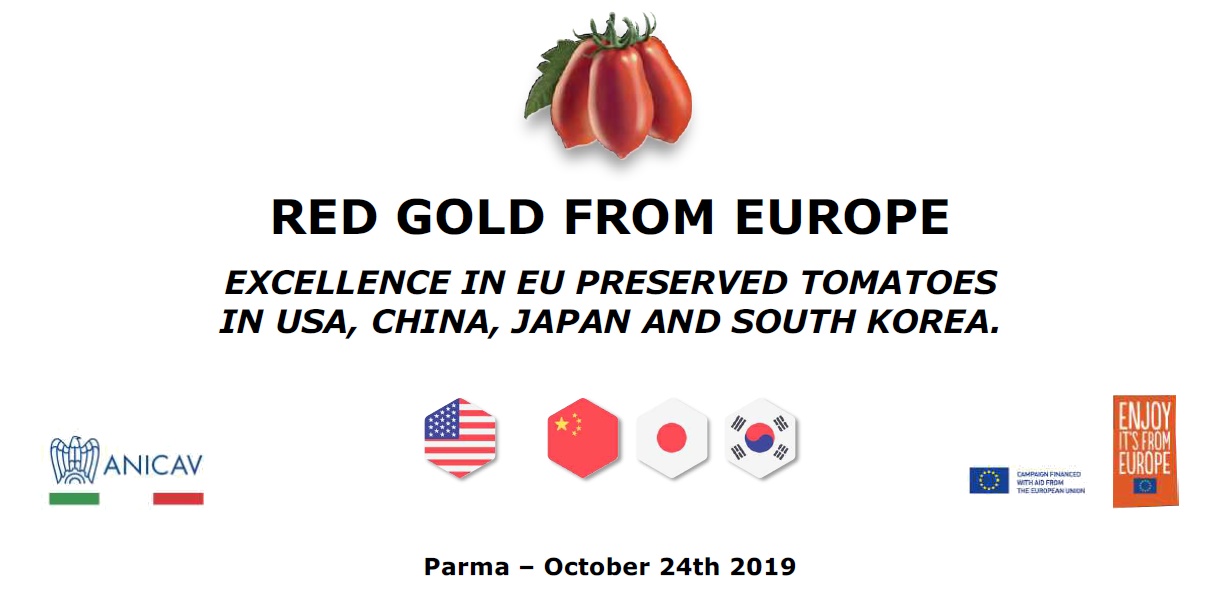 A highlight of the 2019 Tomato Day lectures was the presentation by Manuela Barzan of what seems to be among the most ambitious programmes for the international promotion of European tomato derivatives ever launched: RED GOLD FROM EUROPE – EXCELLENCE OF EU PRESERVED TOMATOES.
“These are two three-year programmes, the first targeting the USA and the second three Asian countries (China, Japan and South Korea). Both Programmes have been approved and co-financed by the European Commission under Regulation N. 1144/2014 as they are directed to target countries considered priorities by the EU, and are supported by a detailed market research that has confirmed these priority markets, as well as consisting of a set of actions that will effectively be able to reach the envisaged target groups. The programmes also include monitoring and evaluation activities such as CAWI ex-ante and ex-post surveys on consumer awareness and consumption of the promoted products on a representative sample of Asian and US consumers.
ANICAV has strongly supported these two programmes which are perfectly integrated into its wider strategic plans that are increasingly oriented towards advocacy actions and initiatives aiming to protect, support and consolidate the interests of the sector whilst at the same time promoting its products globally. Both programmes were launched in March this year. 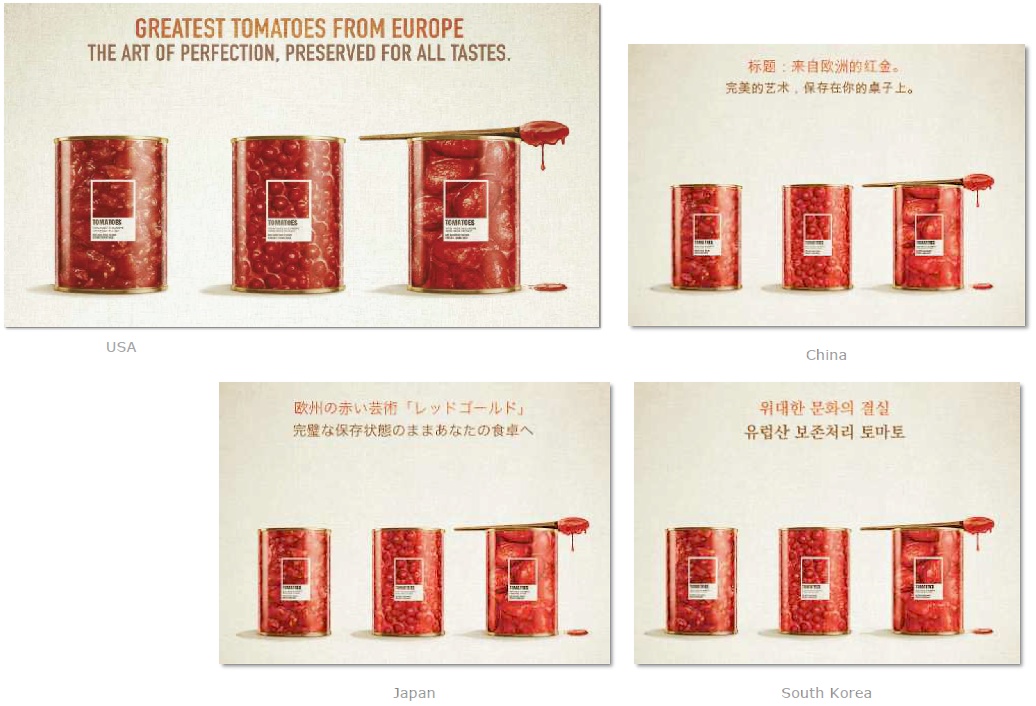 A Communication Strategy and Campaign was defined for each programme: GREATEST TOMATOES FROM EUROPE (for the USA) and RED GOLD FROM EUROPE (for ASIA) – including a creative concept, claim, key visuals, photographic production of campaign visuals, as well as the definition of the creative formats and guidelines for use.
Another key activity consisted in designing, developing and managing the website – both desktop and mobile phone versions. Four domains are registered for the US (.com .eu .it .us) and five for ASIA (.it, .com, .cn, .kr and .jp, one for each target country). The website is multi-lingual: Italian, English, Chinese, Japanese and Korean, and an ad-hoc platform has been developed to upload contents and updates.

Dedicated accounts for the two programmes have been activated in the most relevant and visible social media in each target Country. In the case of the USA, Japan and South Korea we have active accounts on Facebook, Instagram, Twitter and Youtube and in China on WeChat, Youku and Weibo. In line with the objectives of the two programmes, editorial plan in English are drawn up every month with texts and images that are translated and adapted for each country according to its specificities (festivities, traditions, uses and customs, etc.). And this is all supported by regular sponsorship of contents aimed at increasing visibility and the number of followers.
For the programme in the USA, an app for iOs and Android systems has been developed with the following functionalities:
• “Tomapic”: a photographic application using artistic filters and allowing photos to be shared through social media;
• “Agumented Reality Tool”: using the “Photo” function of the app and framing the campaign visuals on the communication materials, a 3D graphic elaboration can be created;
• “Recipes”: section of the app with recipes using preserved tomatoes.

A video and photo shoot were completed at the beginning of October.
The video has been made in 4 versions: 120, 60, 30 and 15 seconds and translated into 5 languages (Italian, English, Chinese, Korean and Japanese). The video has been uploaded to the social media accounts and websites and will be used over the 3-year period for publicity, product placement, participation in TV programmes and trade fairs, press events, etc.
The photo shoot includes different images (the tomato harvest, production, recipes) that can be used for promotional material, the websites and social networks. 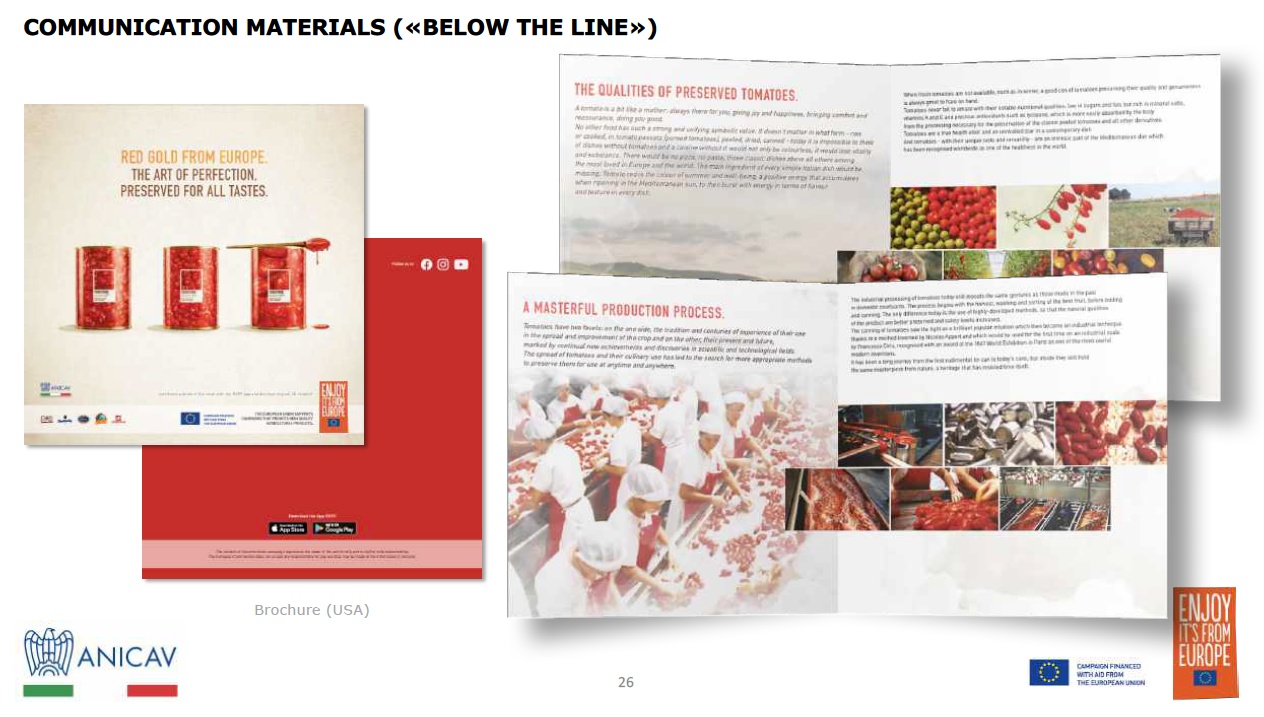 For the “field” activities (fairs, cooking sessions, tastings in restaurants, press events, etc.) different promotional materials have been produced and distributed: for the USA, a 12-page brochure, a desk calendar with 12 recipes, 2 folders with recipe cards, a shopper, and a media kit. In the case of ASIA, a promotional leaflet was produced in 4 language versions. Specific invitations and menus were prepared for press events and restaurant tastings. All the materials will be updated and shoppers, media kits and recipe cards be produced for Asia for the period 2020/2021.
To follow up and provide more information on the various planned events in the Programmes, a press office has been set up in each country, to prepare and distribute regular press releases and press kits, collect all articles published online and offline, manage product placement with bloggers, correspond with all press contacts in providing more detailed information or requests on planned activities, organise workshops (such as with a master Sushi chef in Tokyo tomorrow 25 October), cooking sessions (in Seoul last week with the food writer Marlena Spieler), social network services, interviews with journalists, bloggers and opinion leaders.

Up to now, four press events have been organised: in May in Shanghai, Seoul and Tokyo; and in June in New York. All of them saw the participation of numerous journalists, food bloggers and opinion leaders. But other smaller events have been and will be organised by the end of the year such as the participation to the Japanese Association of Chefs’ event “Gusto” last 9 and 10 October in Tokyo. Another four major events are planned in 2020: on 6 March at the Ritz in Osaka, 11 March at the Ginza 6 in Tokyo, on 17 May at the Viceroy in Chicago and on 4 June at the Mandarin Oriental in Guangzhou. These events are organised at the same time as the participation in 2020 trade fairs. In 2021, another two press events are planned, in San Francisco and Beijing.
Both the programmes envisage the publication of advertisements in well-known magazines. In the United States: Pioneer Woman (magazine part of the Food Network Magazine group), Saveur, and Food & Beverage Magazine. In China: Betty’s Kitchen e Comfort. In Japan; Elle Gourmet and Tokyo Calendar. In South Korea: Home Living & Lifestyle, Olive, Bar & Dining and Leebabcha. 19 pages will be published each year in different formats: from classic advertising to advertorials. In the case of China an agreement has been made with Giglio TV for the participation in the TV programme “Mediterranean Style” co-produced by Chinese State TV CCTV and presented by the famous TV presenter Huang Jie. To support the press and TV campaign, both the programmes include a specific and constant activity of sponsorship of content on the identified social networks.
“Restaurant Weeks” also have been planned for the United States and South Korea. In June 2019, 8 restaurants in New York and Chicago proposed a tasting menu based on preserved tomatoes to their clients for one week. In 2020 and 2021, further restaurants in Las Vegas, Miami, Los Angeles, San Diego and San Francisco as well as in Seoul will organise similar tasting weeks.

In the specific case of China, the programme includes a store promotion in 10 stores in Shanghai (December 2019), Guangzhou (June 2020) and Beijing (in 2021). Each store will host a promotional corner which will be set up and include an I-Pad for the projection of the video. The promotion will be supported by the publication of 4 advertorials in the InStore magazines of the selected chains (Ole and CitySuper in the case of Shanghai).
The planned field activities also include the participation in the main international trade fairs with a stand of either circa 55 m2 or circa 30m2. Both host a welcome area, a space for B2B meetings and a space destined for the exhibition of products. The 55 m2 stand also includes a space for the organisation of daily appointments with a cooking show. To guarantee greater visibility to the two campaigns in each fair, the sponsorship of specific events has been planned, or otherwise where there are no special events a presence in official catalogues, website banners and visitor floor maps.
In 2019, in Asia, the programme participated in the SIAL CHINA in Shanghai (in May) and sponsored the event La Cuisine and in the United States, participated successfully in Summer Fancy Food in New York and sponsored the Frontburner event.
And in the US, in August the programme sponsored the annual convention of the American Cooking Federation in Orlando, in Florida, with the organisation of a cooking demonstration and a welcome reception, both coordinated by an Italian chef and which saw the participation of about 950 guests.
The participation in trade fairs will intensify in 2020 and 2021 and in both years the programme will participate in 4 sector fairs in the United States (Winter & Summer Fancy Food Show with the sponsorship of Frontburner, International Pizza Expo with the sponsorship of the World Champion Pizza Maker of the Year and the Pizza Block Party, National Restaurant Association Show) and three sector fairs in Asia (Foodex Japan, China International Food Exhibition in 2020 and Anufood China in 2021, Food Week Korea) as well as, in July 2020 in Dallas, the sponsorship of the annual convention of the American Cooking Federation. 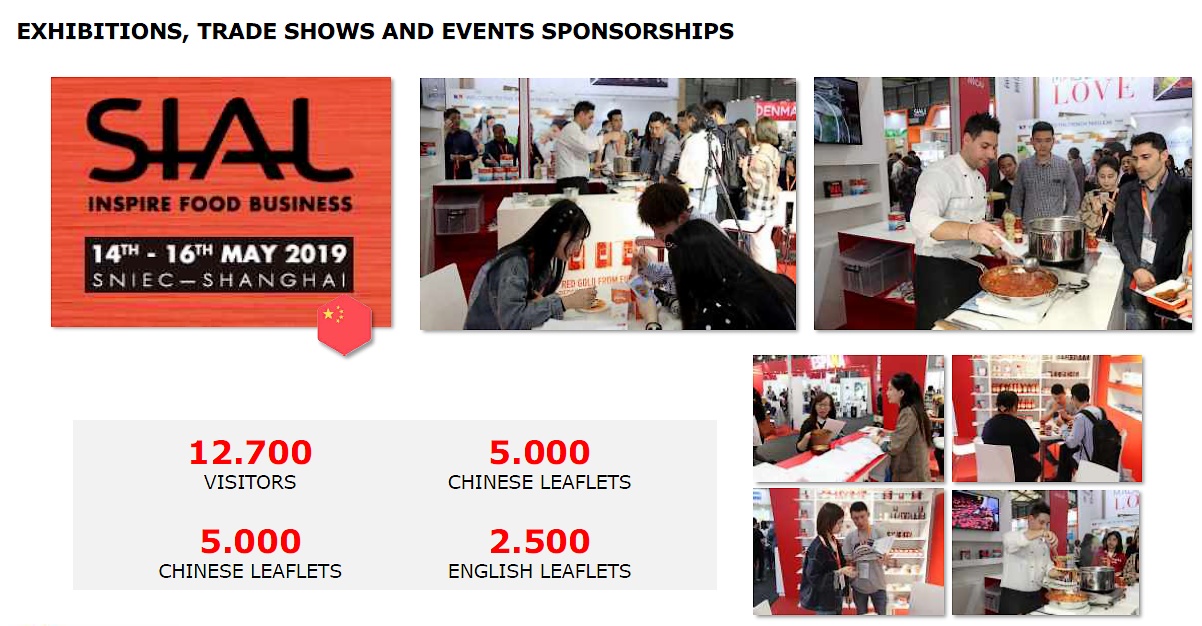 Last but not least, both the programmes envisage the organisation of press tours. Namely, from 30 August to 4 September 2020, a visit of 40 press representatives (10 from each target country) is planned to the tomato groves and the firms producing preserved tomatoes as well as pizza making and cooking sessions and cooking competition coordinated by the famous Italian Michelin star chef Gennaro Esposito. Another press tour for 10 American journalists is planned in 2021.
So to sum up: two very ambitious programmes that rely on the active collaboration of all the members of ANICAV and all the other European organisations that protect and promote European tomatoes and their derivatives: a unique and indispensable ingredient for our table." 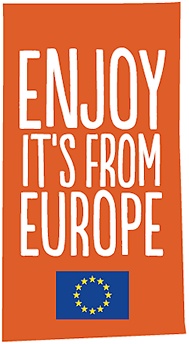 Enjoy! It’s from Europe!
Some complementary data:
Manuela Barzan is Project Management Consultant with a progressive career spanning over 30 years in preparing, implementing and delivering complex projects, programmes and initiatives on an international scale in the fields of agriculture, food production, textiles and clothing, and tourism.  Strategic and logical with an unbroken track record in consistently preparing and delivering EU-funded multi-partner, high budget projects to demanding timescales with a focus on project governance, compliance with EU regulations, socio-economic development and cohesion policy.
To access all the 2019 Tomato Day Conference presentations:
https://www.cibustec.it/en/conferences-and-events/conferences/
Full presentation:
TomatoDay 2019 _ Manuella Barzan_compressed