The production of processing tomatoes in Portugal has increased sharply over the past quarter century, from just over 900 000 tonnes (metric, mT) processed in 1996 to an operational forecast of 1.4 million mT for the upcoming 2020 season. Despite being affected by the climatic and commercial vagaries that have marked this development, Portuguese production has grown at a respectable average annual rate of 1.8%, averaging around 21 000 additional tonnes per harvest. 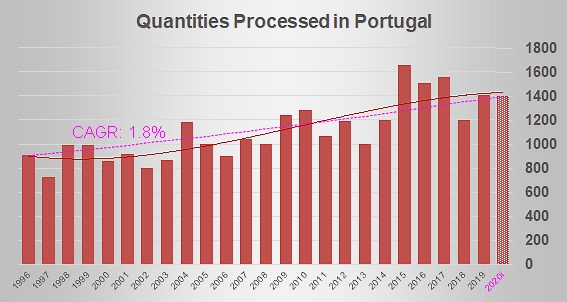 These results and the circumstances surrounding the successive processing seasons have already been widely commented in the articles and reports devoted by Tomato News to the Portuguese, European and worldwide sectors. However, the data collected by the IFAP (Instituto de Financiamento da Agricultura e Pescas) highlights the profound changes in the agro-industrial fabric that has accompanied this evolution and clarifies how it came about.

The upstream agricultural structures
One of the most important of these changes was the creation and rise of Producers’ Organizations, strongly motivated by the European Union, whose number in Portugal had risen to almost fifty by the early 2000s. Their number has decreased significantly since that date, but their role in the development of processing tomato operations has been consolidated and has largely contributed, in partnership with industrial operators, to building an extremely competitive sector with a European and global scope. At the start of the 2020 season, Portugal has twelve POs of varying sizes, with a production target of around 1.035 million mT of raw tomatoes. It should be noted that this quantity managed by POs represents only around 77% of Portuguese processing intentions for the year, thereby acknowledging by implication a non-negligible proportion of operations carried out by growers who are unaffiliated with any recognized PO. In recent seasons, this latter group has produced just under 1% of the volumes processed on the national scale.

The data collected by IFAP shows that the areas dedicated to processing tomatoes have changed relatively little over the past two decades, remaining fairly close (despite a few rare exceptions) to an annual average of around 15 000 hectares (see appendices). Given the regularity of the figures for planted surfaces, this data underlines the spectacular improvement in agricultural yields of processing tomatoes. In a context of slow growth in terms of planted surfaces, the Portuguese sector increased the quantities harvested by 56% between 1996 and 2019. This figure is even more spectacular if the production peaks of the 2015-2017 period are taken into account, leading to a consequential increase in yields of 80% over twenty-five years, from 54 mT/ha to 97 mT/ha, thereby placing Portugal among the world’s best performers in the sector, alongside Canada, California, Spain, etc. 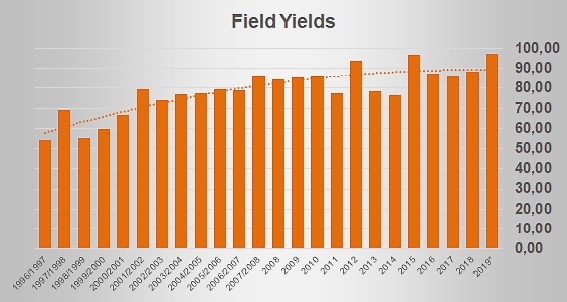 A profound change in the Portuguese processing tomato landscape took place in parallel with the changes already mentioned (quantities, organization of production, agricultural yields) and which was probably one of their main drivers. Between 1996 and 2019, the number of active growers was divided by 16. From more than 5 800 in 1996, their number has literally fallen to around 370 in recent years, in an economic context of increasing difficulties, which suggests that only the best performers or those whose operating structures allowed economies of scale have been able to stay in business. The increasingly demanding circumstances in terms of production quality, profitability, health considerations, social and regulatory constraints, as well as adaptability to new tools and techniques, have led the Portuguese industry to professionalize, like its counterparts in the rest of Europe and of the world. So the Portuguese production has relied over the years on an increasingly reduced number of operators (POs and growers), themselves more and more specialized and efficient, in an approach that has contributed to improving the profitability of farms by considerably increasing the areas and quantities contracted for each of them.
The average annual quantity produced by each grower has therefore been multiplied by 26, going from 150 mT/year in 1996 to almost 4 000 mT/year during the latest season (see appendices). 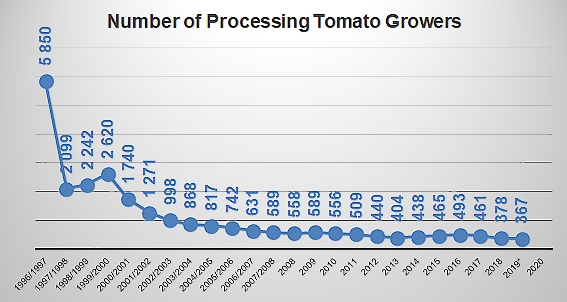 The downstream processing structures
The Portuguese sector includes a fairly small number of companies. For the 2020 season, eight companies will operate in the processing sector, with volumes that cannot yet be estimated precisely. Two operators – Sugal (the leader) and Italagro – share a little less than two thirds of the activity, i.e. a little more than 920 000 mT on average over the last five seasons. Two other companies (Campil and Conesa Portugal) process volumes between 160 000 and 170 000 mT (on average over the same period), with two further ones (Tomatagro and Sutol) dealing with quantities of around 85 000 mT per year. 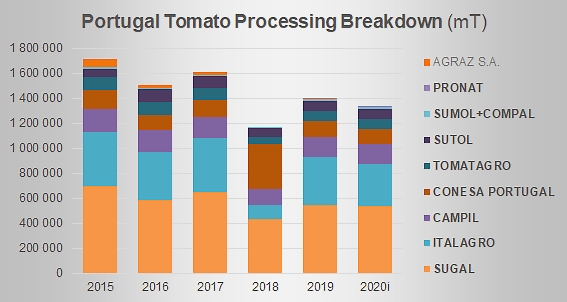 Evolution of surfaces used for the cultivation of processing tomatoes; averages and trends over the period 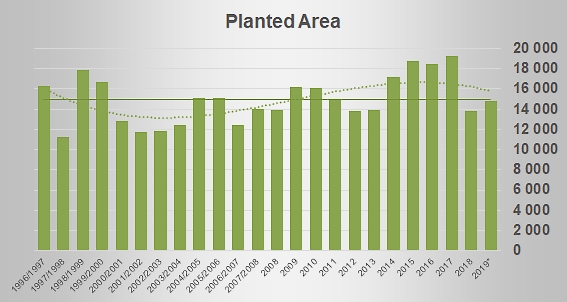 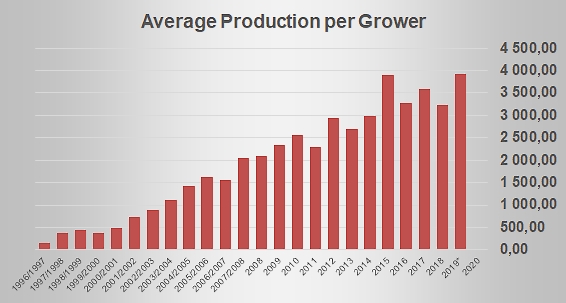 Amount of subsidies per hectare over the past five years

For further details, consult our directory by following the link:
http://www.tomatonews.com/en/directory_3.html 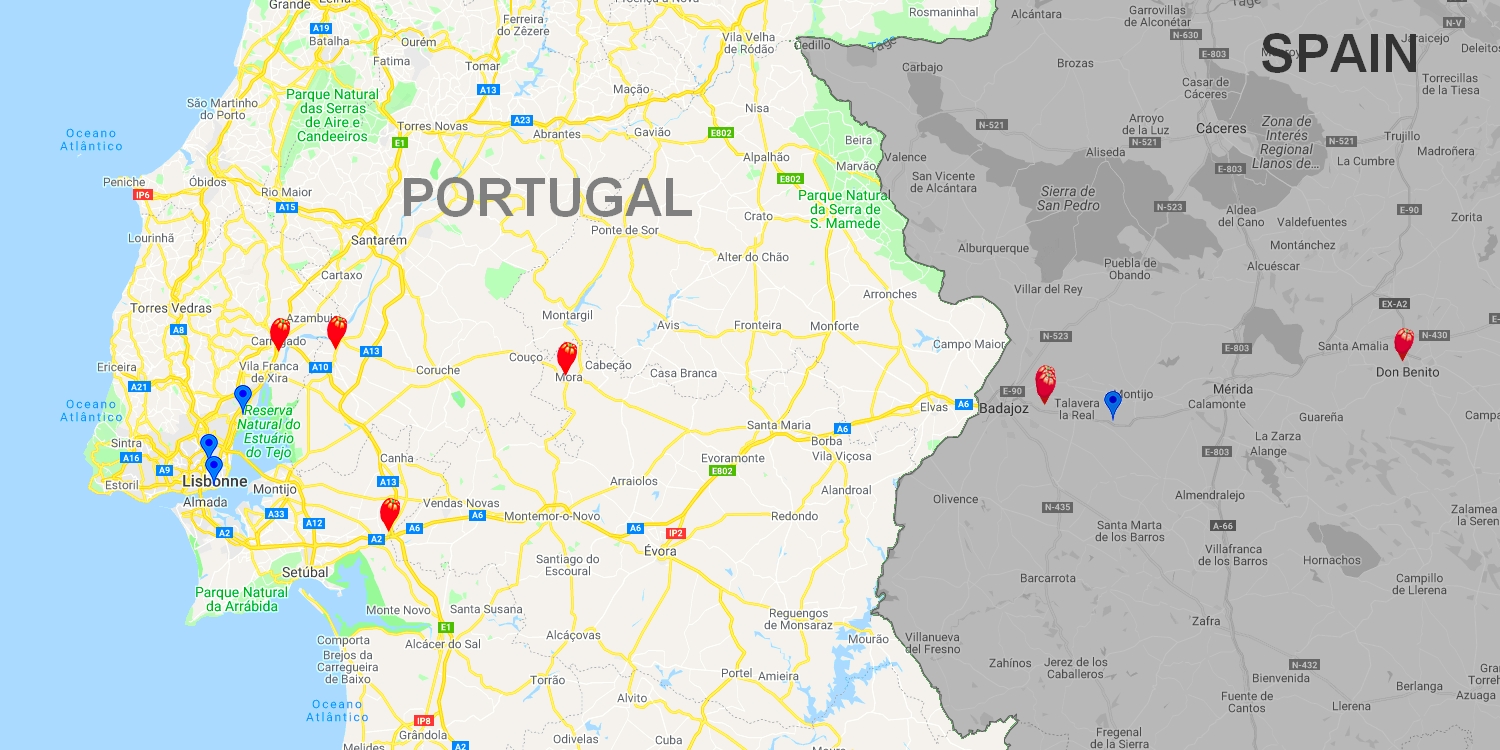