Portugal: 2019, a year of adjustment for foreign trade

In 2019, the Portuguese sector ranked fifth in the world for paste exports, with a total quantity of just over 250 000 metric tonnes (mT) of finished products, behind the United States (nearly 310 000 mT) and ahead of Chile (just under 181 000 mT) (a country where the Sugal group, one of the leaders of the Portuguese tomato-processing sector, also operates a large tomato processing company).
Portugal's 2019 export performance was down significantly compared to what it was the previous year (272 400 mT exported in 2018) but for the moment, this only reflects an adjustment in trade dynamics after several years of strong growth. From 2010 to 2018, Portuguese foreign sales increased on average by 10 000 to 15 000 mT per year (CAGR 5.8%) and the decrease in the result for 2019 only amounts to about 3% (8 150 mT) compared to the average performance level of the previous three years (258 700 mT over the period running 2016-2018). 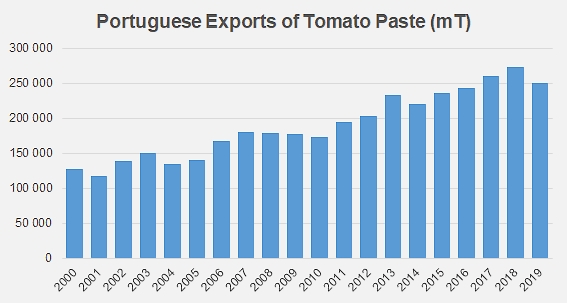 Most of the Portuguese paste exports generally involve products intended for the catering sector or industrial pack products with a soluble solids content above 12% or 30% (classified under the codes 20029031 and 20029091). The truly significant decreases observed between 2018 and 2019 impacted these product categories, in particular due to the clear slowdown in British purchases of paste of more than 30% soluble solids content (20029091), which was not offset by the increases in sales to Sudan (+6 300 mT), Belgium or France. German, Dutch and Italian purchases of 12% to 30% soluble solids pastes (20029031) also stalled last year (see appendices). In addition to the countries already mentioned for having recorded increases, it should be noted that foreign sales of Portuguese pastes also increased to Japan, Poland, Spain and Oman.
Over the first three months of 2020, Portugal's export performance seems likely to correct the downturn recorded in 2019, with exported volumes up by almost 4% compared to the first quarter of last year (see appendices).

Paste exports generate 85% of Portugal's revenue on foreign markets. The drop in activity recorded in 2019 had a significant impact on the turnover of the sector which, at EUR 187 million (USD 209 million), fell by 4.5% compared to the result of 2018 and by almost 5% compared to the average income of the previous three years (EUR 196 million).

Income from other sectors of the Portuguese industry was not affected in the same way. For canned tomatoes (peeled, unpeeled, whole or chopped), the turnover generated in 2019 by foreign sales (EUR 13 million, or USD 14.6 million) increased significantly compared to the turnover of 2018 (+13%), while only showing a moderate increase (2%) compared to the average of the previous three years. It seems that in the case of canned tomatoes, the year of "adjustment" already took place in 2018, after a long succession of particularly successful years for exporters in this category, with 2019 results naturally following on from ten years of growth driven by an average annual increase (CAGR) of around 20%.
Like its Spanish neighbor, the Portuguese industry has been striving for several years to develop its export activities for canned goods, on a market mainly held by Italian operators. The number of countries served and the tonnages have been increasing steadily; with 37 250 mT exported in 2019 – the best performance on record for the country, Portugal exceeded by more than 4 000 mT (+12%) its average performance of the previous three years, thanks to dynamics driven by the development of foreign sales of whole-peeled tomatoes, mainly intended for the United Kingdom, Spain, Italy, Germany, Belgium, Poland, etc.
Exports in the first quarter of 2020 seem to indicate a weakening of this impetus, with a result of around 10 200 mT, slightly below the first three months of 2019. 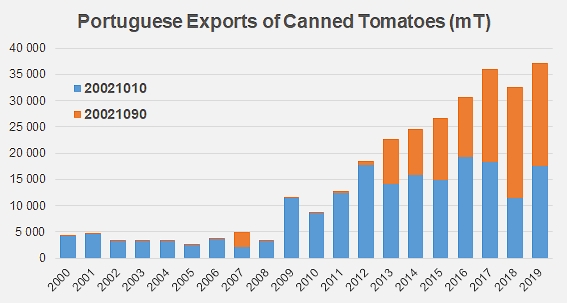 Like the canned tomatoes sector, albeit to a lesser extent, the Portuguese sauces export sector recorded an increase in turnover last year. Operations in this category were more stable than in the canned tomatoes section in terms of quantities and the number of destinations served, with just over 35 400 mT traded in 2019, only 2% more than in 2018 but also 2% less (700 mT) than the average of the previous three years. The category generates an average of approximately 11% of the total Portuguese turnover from exports of tomato products each year. It recorded growth of less than 1% in its performance in 2019 compared to the average level of the three years previous years, reaching EUR 24.8 million (USD 27.7 million).
To a greater extent than the other export categories, the sauces category is extremely dependent on a relatively small number of European outlets, so annual variations in trade flows can rapidly have a significant impact on overall operations. For this reason, the relatively measured decreases in Portuguese tomato sauce purchases from France (-3 200 mT) or Germany (-850 mT) had a significant impact on the country's activity in that category, an impact that was not offset by the increases recorded both for the biggest markets (United Kingdom, Ireland, Netherlands, Finland, etc.) and for many "secondary" destinations.
Foreign sales of sauces in the first quarter of 2020 (8 700 mT) were almost 8% lower than over the same period of 2019. 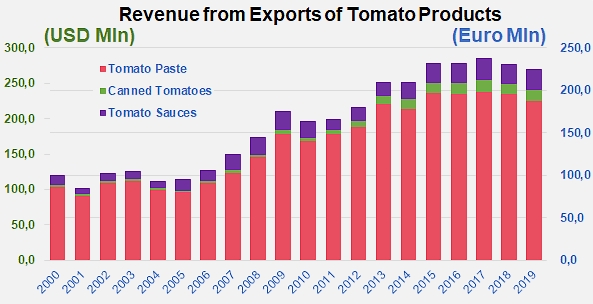 Overall, countries of the European Union play a predominant role in the Portuguese exports of tomato products. More than three-quarters of the revenue from Portuguese foreign operations have been generated by intra-community sales, of which over the last three years 10% were realized on the Spanish market, 8% in Germany, 5% in France and 4% in Italy, and, more importantly, nearly 30% on the UK market, a country that will soon no longer be a member of the EU.
The fraction absorbed by European markets was far greater in the past, when quantities dedicated to supplying the paste markets of the Far East, the Middle East and Eurasia did not yet represent strategic stakes for the Portuguese industry (with exports from other categories (canned tomatoes and sauces) being almost exclusively (more than 95%) intended for European markets). Over the past two decades, the incursions of Portuguese products into non-EU markets have evolved into increasingly stable and consistent trade flows. These markets now generate a quarter of Portuguese export revenue, compared to 14% in the early 2000s.

This can be explained by reasons of geographic proximity and low transport costs, but the situation could expose the players of this particular sector of the European market to complications or even difficulties in 2020 during the phase of setting up future trade modalities with the United Kingdom, and then during the transition year in 2021, as soon as arrangements for post-Brexit commercial exchanges come into effect. 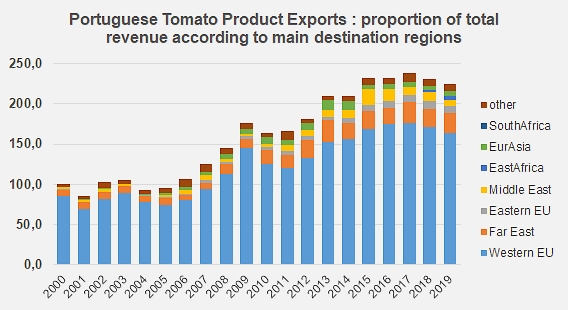 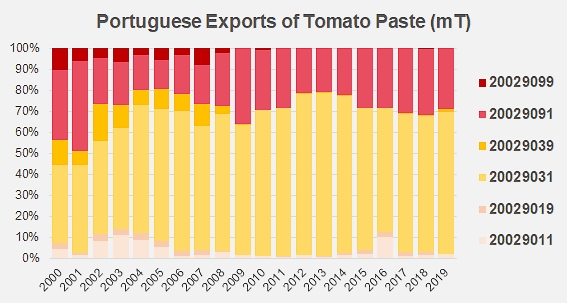 Comparison of monthly paste exports over the past 24 months 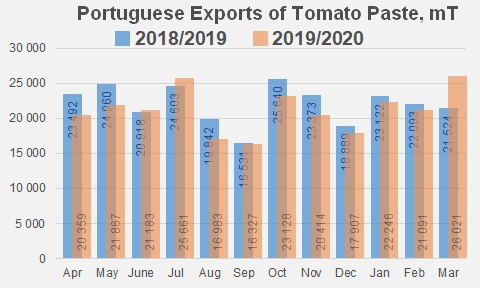 Italy puts tomatoes on the blockchain