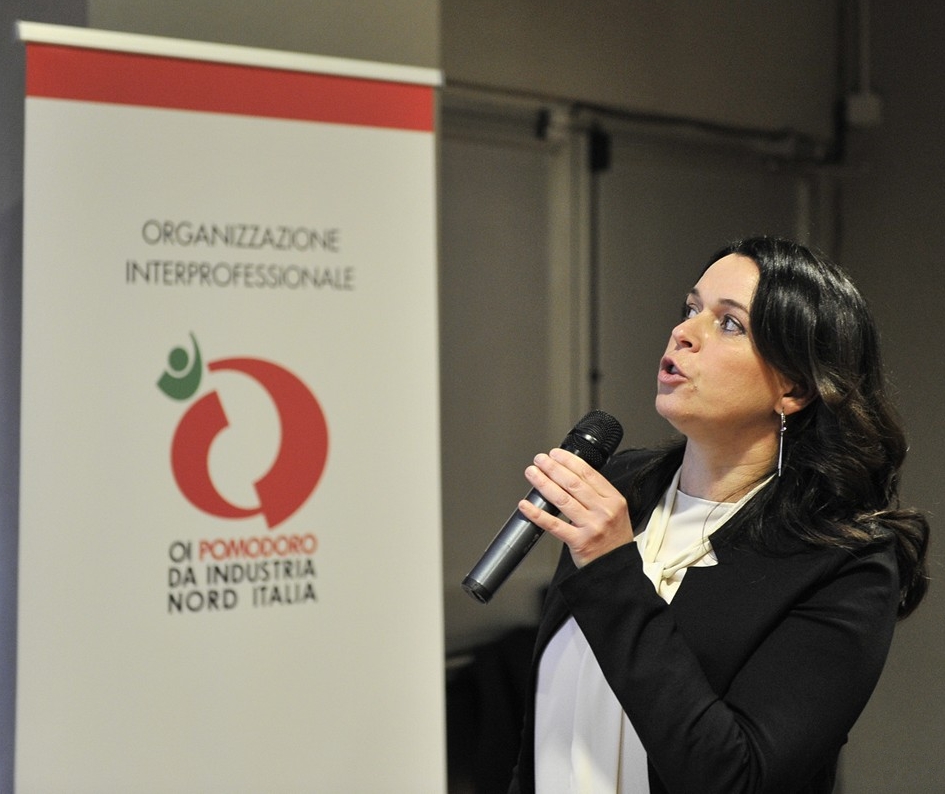 The processing tomato industry of northern Italy held a conference-exhibition in Piacenza on 20 and 21 February 2020, the high points of which were the declarations by the President of the Pomodoro Nord IO, Tiberio Rabboni (see our article 6770), as well as presentations of the 2019 season’s detailed results by the organization’s Secretary General, Maria Chiara Cavallo, and by the President of TomatoEurop and CEO of the Solana company, Antonio Casana.

Of particular importance among the data that emerged from this conference, it was pointed out that there has been a gradual decrease since 2015 in the quantities of raw materials dedicated to paste production, while the volumes intended for making pulped products have increased. At the same time, in a context that has maintained the total quantities of raw materials absorbed by industrially processed products, the sector has seen a decrease in the volumes of processed raw material distributed through the retail sector (and therefore probably a slowdown in household consumption) while the quantities absorbed by the Horeca sector (hotels, restaurants and cafés) indicate an increase in consumption outside the home. 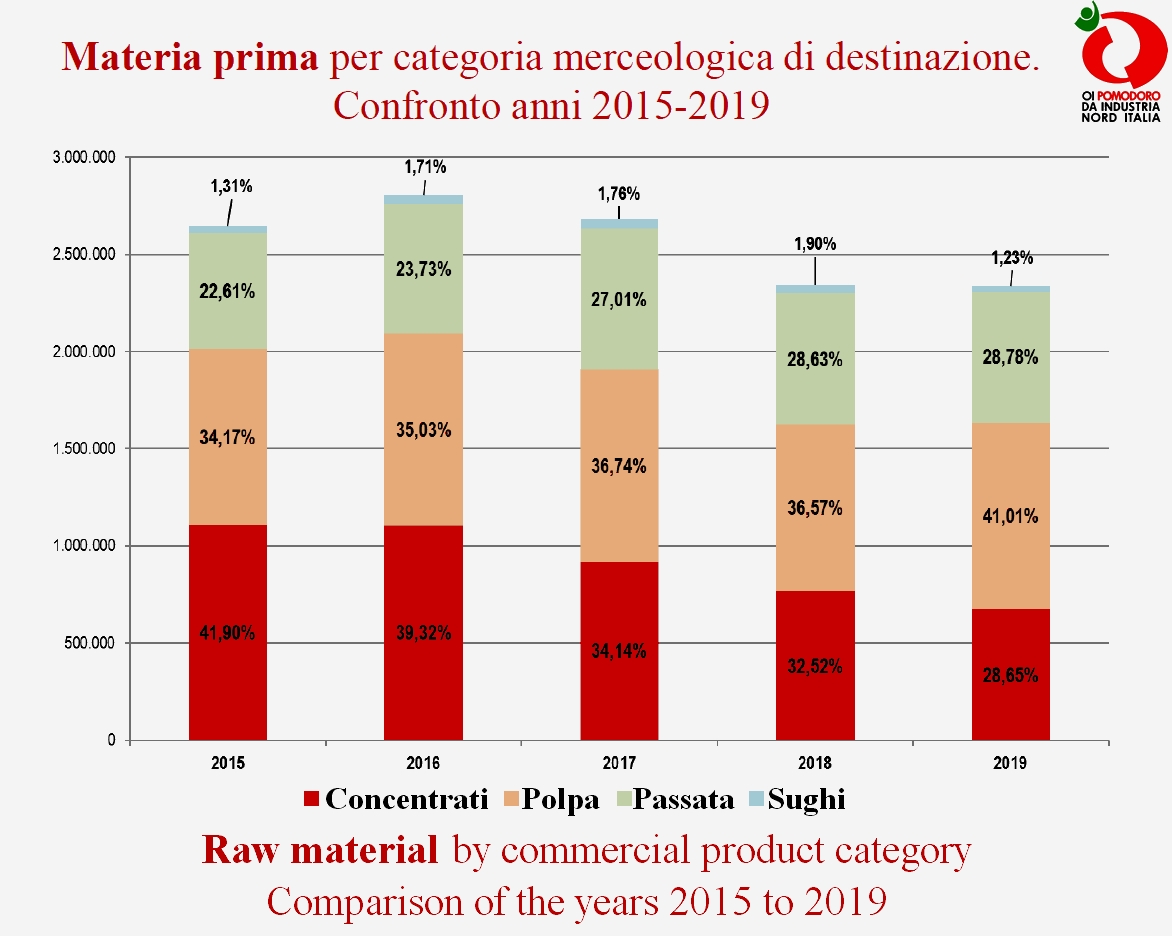 These are the main conclusions resulting from the figures provided by the 29 processing plants belonging to the 22 companies that operated in northern Italy during the 2019 campaign. With a harvest lasting 64 days, this season was six days longer than in 2018 (taking into account the impact of bad weather) and allowed more than 2.3 million tonnes of fresh tomatoes to be processed, grown on 36 600 hectares. The distribution of the quantities of fresh tomatoes by category of finished product was as follows: pulped products absorbed 41% of the raw material with 962 320 tonnes processed, passata absorbed 29% of tomatoes delivered with 675 182 tonnes processed, pastes also absorbed 29% with 672 266 tonnes processed, and sauces absorbed 1% with 28 946 tonnes processed. 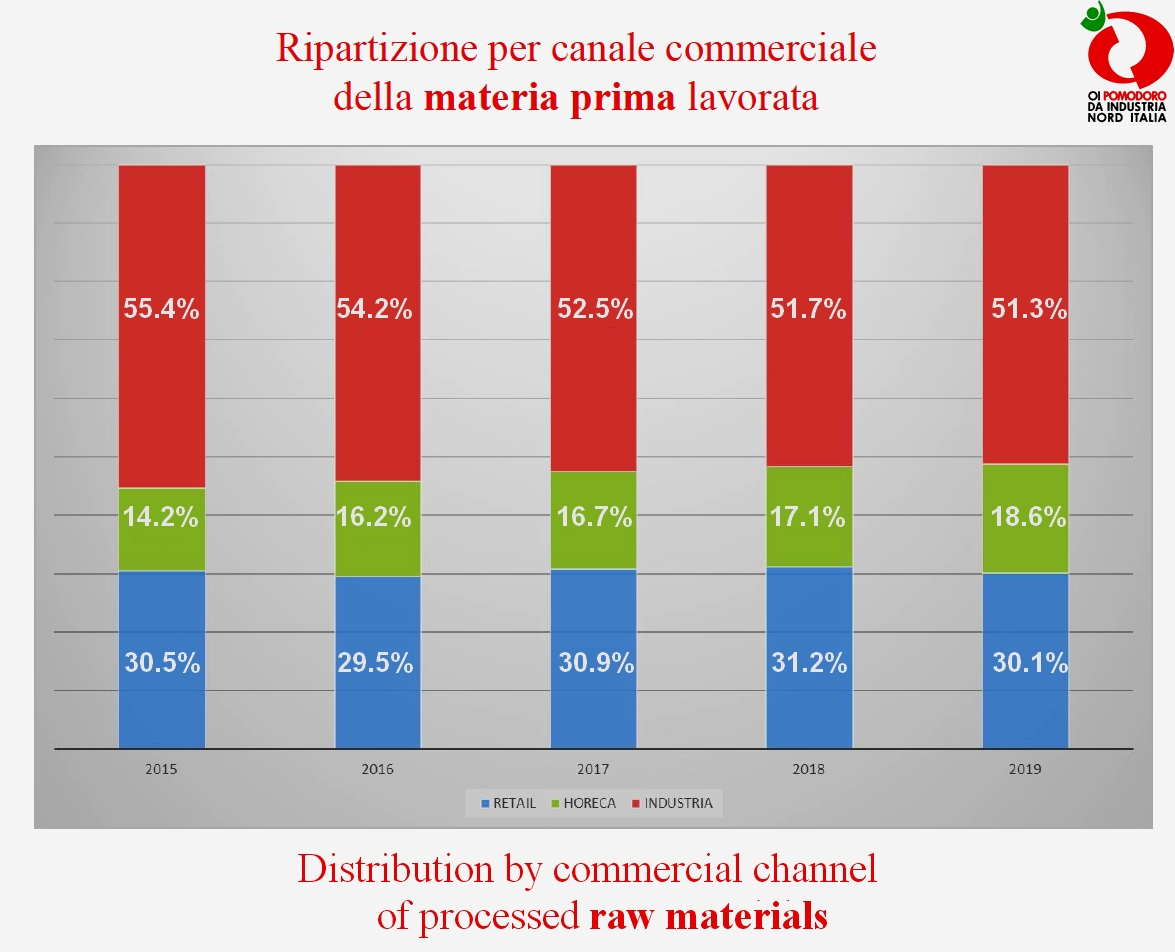 Of the total production processed from tomatoes in 2019, pulped products increased by 7.8% and pastes decreased by 12.3%, while passata remained practically unchanged compared to 2018. 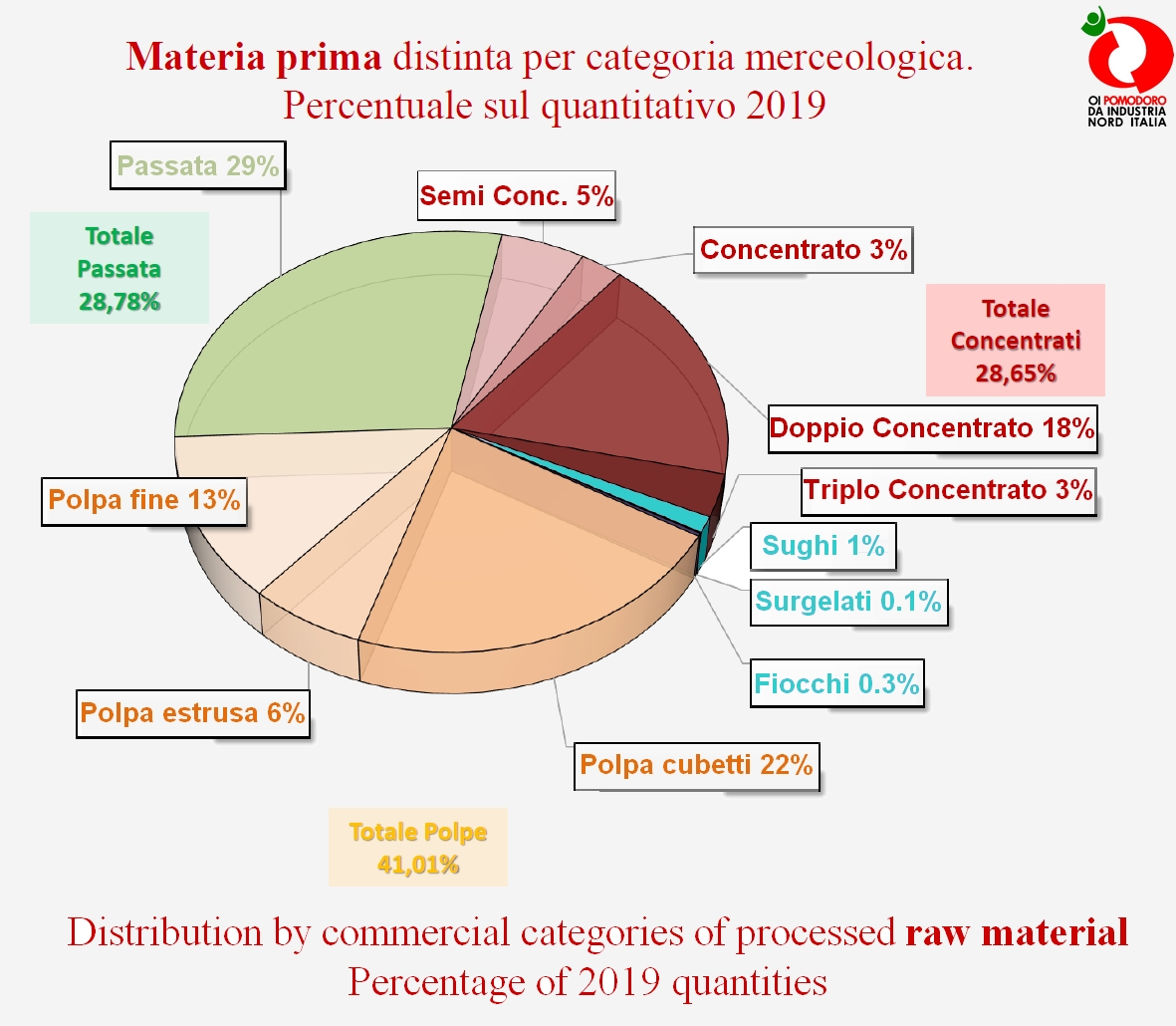 In her presentation on the results of the 2019 season, Maria Chiara Cavallo also returned to the difficulties encountered last year by the Italian sector in the North, in order to explain the significant difference between the quantities contracted and the tonnages actually delivered and paid (close to 19%). It must be remembered that the total quantities processed in northern Italy amounted to 2.37 million mT, or 18.8% less than contracted volumes (around 2.92 million mT). A total of 35 960 hectares were planted in northern Italy in 2019, more than in 2018 (34 600 ha), but due to adverse weather conditions, average yields did not exceed 65 mT per hectare (compared to the five-year average of around 70 mT/ha). The season was a challenge, with a lot of rain in May, causing production delays, coupled with several hailstorms and extreme heat in July and August. Overall quality was average with a Brix of 4.76. 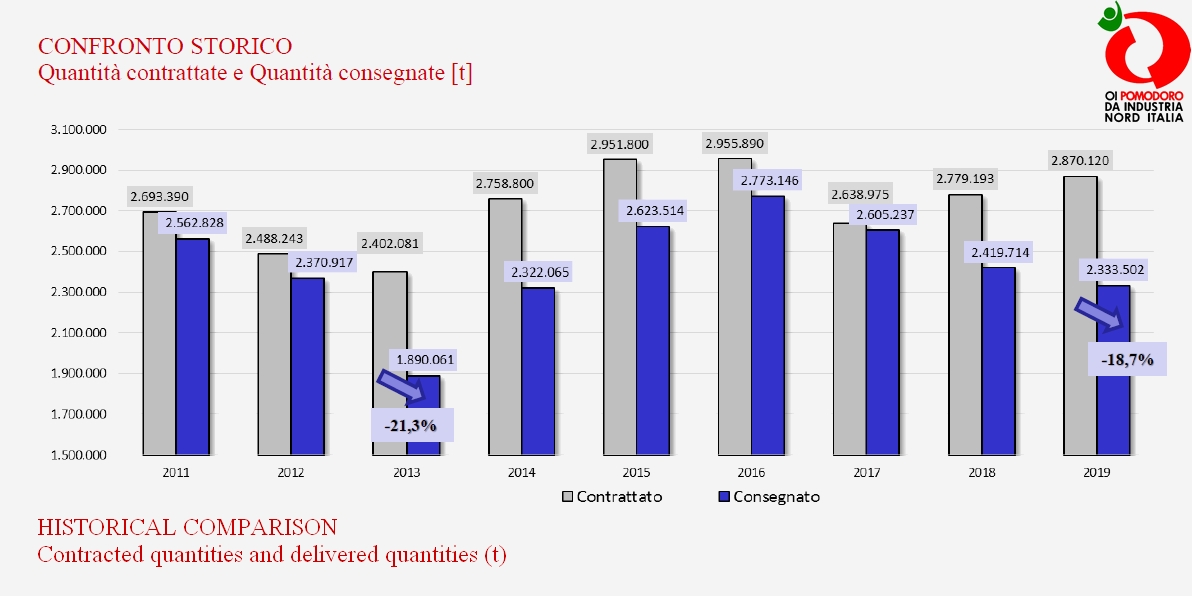 Emilia-Romagna was the only region to report a really significant increase in surfaces dedicated to processing tomatoes, compared to previous years, and it was once again the biggest contributor to the harvest, with around 71% of the quantities delivered. Lombardy crops accounted for 20% of the total, with Piedmont and Veneto contributing respectively 5% and 4%.
With regard to planted surfaces, the distribution between integrated production and organic production has been changing regularly in recent years, in favor of "organic" crops, which further increased last year to reach more than 3 100 hectares, accounting for around 8.6% of total surfaces. Agricultural yields in organic production, generally 8% to 10% lower compared to yields obtained in integrated production, were severely impacted in 2019 and only amounted to about 47 mT/ha (compared to 65 mT/ha on average over the previous four years). The average productivity of integrated production over the previous four seasons was slightly above 71 mT/ha. 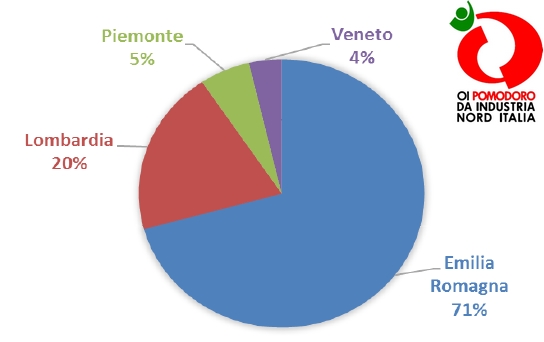 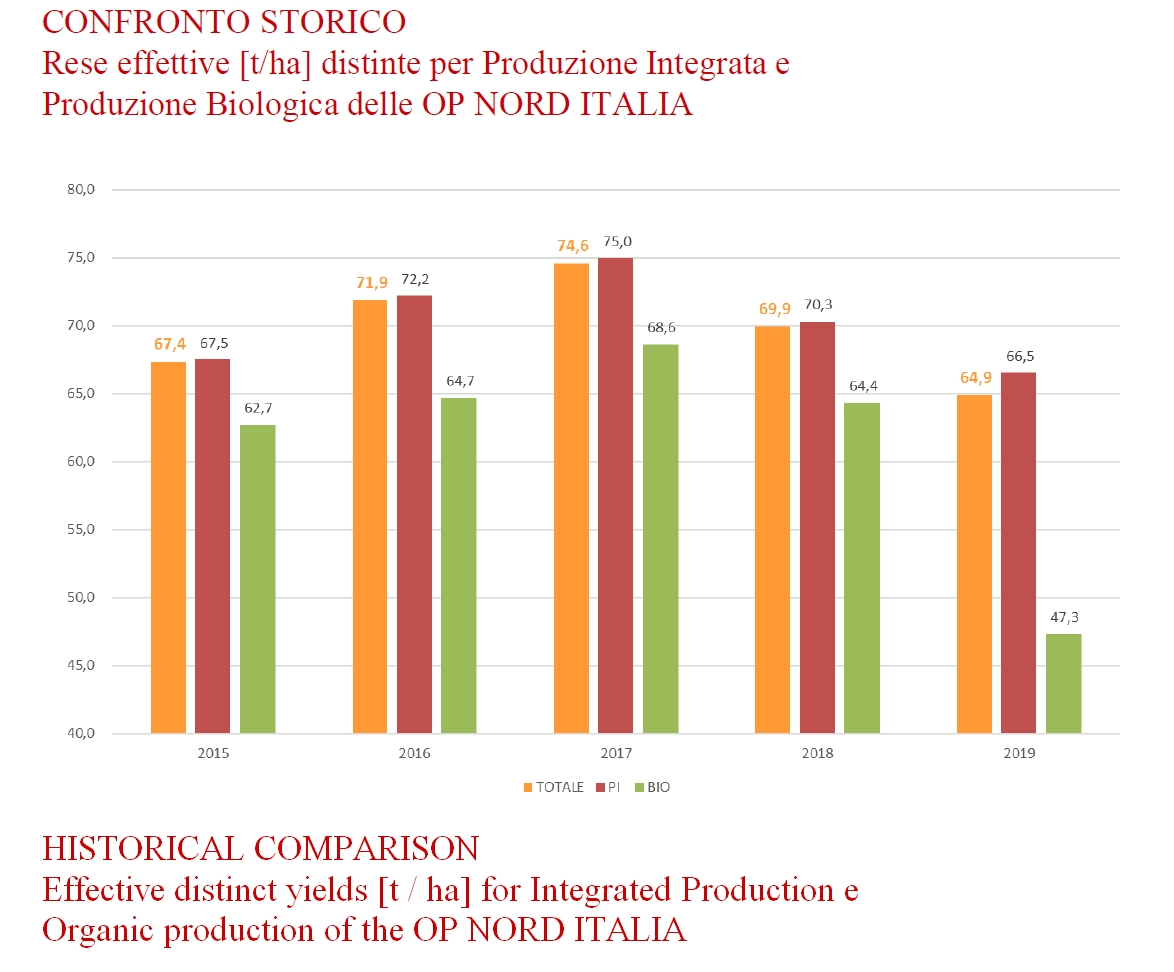 Pomodoro Nord IO: a strong ethical stand against the caporalato