11/06/2019 - François-Xavier Branthôme - 2019 Season
“Decidedly unusual weather”
Northern Italy has experienced very bad weather in the last two weeks (from the end of May to early June), with a lot of rain and cold temperatures. Local professional sources explain that it is still difficult to assess the damage, adding that there are different situations and factors:
• On 5 June, there was some delay in transplanting, so these operations will end two weeks later than usual, which is expected to be about the middle of June.
• Accordingly, growers fear some decrease of the expected yield per hectare for early crops.
• Lastly, some flooded fields where cultivation has been affected will probably be given over to other crops (eg. maize).
The impact of adverse weather conditions is difficult to assess, because primary information provided by Producers’ Organizations and growers gives details about the damaged surfaces but doesn’t give any estimates of the expected effects on quantities, nor indeed on quality.
More information will be released next week through the official statement expected after the next meeting of the Pomodoro Northern Italy IO. 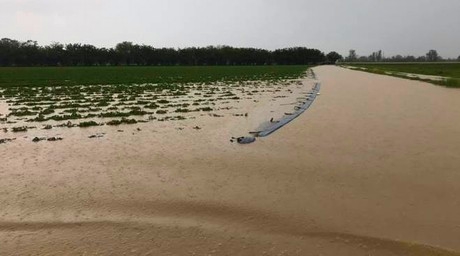 Processing tomato field  flooded near Mottaziana
On 30 May, Confagricoltura Piacenza warned about a possible disaster due to bad weather. "Transplant operations have slowed down considerably and processing tomato seedlings already show signs of extreme stress. The situation is so serious that it could compromise production yields." This is how Giovanni Lambertini, President of Confindustria's Processing Tomato Product Division of Confagricoltura Piacenza and of Emilia-Romagna Confagricoltura, commented the situation, following the persistent rains that have plagued the province, especially in Val Tidone and in Val d'Arda, 20 to 25 km southwest and south of Piacenza. A little further east, in the Mantua region, operators of the tomato processing industry talk about “one tomato plant in three being impacted.”
The rainfall that occurred in following weeks was characterized by intense rains and hailstorms which, as reported by Confagricoltura, have already seriously affected the fruit and vegetable sector. "For industrial tomatoes, it is obviously early for budgets – explained Lambertini – but we note difficulties and damages that are likely to modify the schedule of operations already planned, and we can suppose that necessary interventions will increase costs, in addition to the difficulty of carrying out such interventions and the risk of performing them too late." 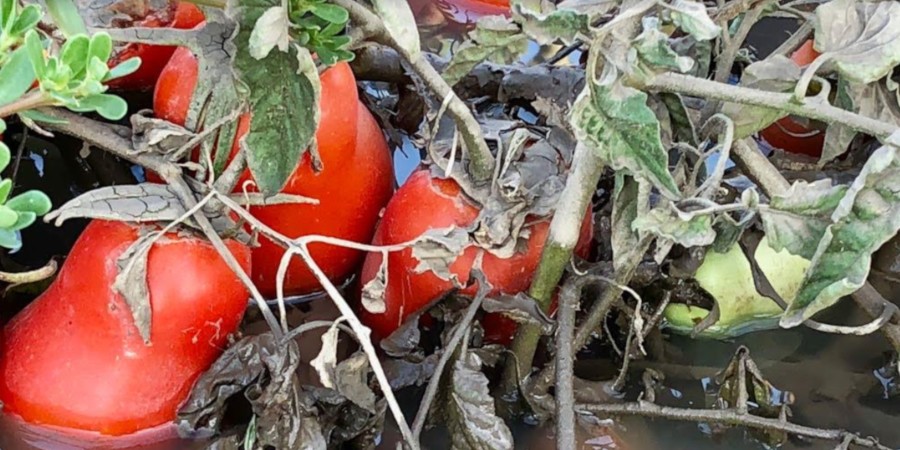 “…more than double the rainfall compared to the average, in a totally abnormal month of May, which represents a monthly record with regard to the past decade, with 123.3 millimetres of rain"
In late May, the Coldiretti mentioned a “crazy spring that threatens to compromise final production”. "This year, we are at least two weeks late with transplanting," explained Davide Rocca, a technician with the Consorzio Casalasco del Pomodoro, one of the main Italian companies involved in the cultivation, production and processing of tomatoes. “The areas most concerned are those between Cremona and Mantua. We risk a late harvest.”
In Lombardy, 7 000 hectares have been planted with tomatoes. The crops are grown mostly in the provinces of Mantua and Cremona, which together account for almost 80% of the surfaces dedicated to this production.
The Coldiretti concluded that “the latest wave of bad weather in the Italian countryside caused damage of more than ten million euros, being the obvious consequence of climate change in Italy, where the exceptionality of atmospheric events is now the norm, manifesting itself with a higher frequency of violent episodes, larger hailstones, seasonal phase shifts, short and intense precipitations and the rapid passage from sunny weather to bad weather, with significant temperature changes.”
Source: Piacenza Sera, Freshplaza, monzaindiretta.it, altramantova.it, portalecce.it, Industry sources
Back