21/09/2018 - François-Xavier Branthôme - Lire en français
On 30 September 2018, La Doria will close its factory in Acerra, a historical 24 000 m² site in the Naples region where the company produced sauces and other tomato products. This decision was taken in August, at the outcome of a meeting that included company executives, union leaders and government representatives.
It would seem that discussions did not lead to further negotiations, as they ended with plans for redeploying workers of the plant to other sites operated by the group. Once proposals were dropped to relocate operations to the Parma site (specialized in the production of ready-to-use sauces), it was decided to deploy the Acerra workers (about 60 of them) in the three other operating plants of the group (see infographics at the end of the article): Fisciano (processing tomatoes, pulses, vegetables and cooking pasta), Angri and Sarno (processing tomatoes, fruit juices and other drinks, pulses, vegetables and cooking pasta).

According to a representative from the company answering some questions from Tomato News, “La Doria currently operates within an extremely competitive marketplace which over recent years has been significantly impacted by ever increasing price pressure in the market place.
The urgent and imperative restructuring of production is therefore needed to boost operating efficiency and the Group’s competitiveness and as an essential undertaking to grow revenues, production volumes and to protect jobs, in addition to maintaining a sufficient margin to generate resources to fund the investment required to ensure a steady path for future growth.

This new reality demands industrial restructuring and the decision has been taken to close the Acerra facility dedicated to ready-made sauce production, which for a number of years has been uneconomical.
The closure of the facility and the consequent concentration of production at the Parma facility will not impact jobs, with all 49 employees to be absorbed by the other Group industrial facilities.

At the same time, the Company has launched a major investment plan of about 115 million of euros centred on production capacity increase, further efficiency and cost competitiveness.
The Plan will target the increase in the production capacity principally for categories with stronger growth potential, the extension and automation of warehouses and improved industrial and logistics efficiency”.
Investments of 115 million are planned
At virtually the same moment, the half-yearly financial report for June was approved, with the La Doria group publishing an increase in revenue and sales volumes, with reasonable ongoing profitability despite increasingly harsh competition, in a trade context that is encouraging at the worldwide level despite slowing slightly at the domestic level. La Doria has announced a consolidated turnover (over six months) that is up 2.5% to EUR 349.3 million, with good performance results for the "Linea rossa" red products line, which has grown 4.4%. Most of these sales (80.3%) have been achieved on foreign markets (+6.8%), while the contribution of the domestic market only accounted for 19.7%, with a turnover that has dropped by 7.4%. 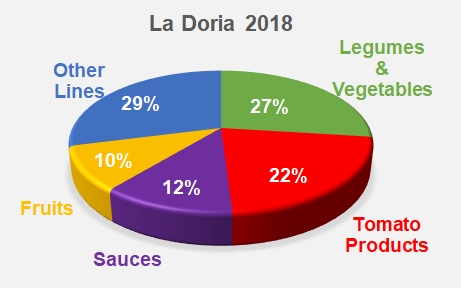 Distribution of the group's turnover results

On a market that is characterized by intense competition, La Doria plans to focus on increasing its market shares by growing its sales volume. Over the first semester of the year, the group launched a massive investment plan of about EUR 115 million over four years, intended to increase its production capacity in the product categories that offer the best added-value and the highest rates of potential growth, like the ready-to-use sauces sector.

"This plan will allow us to consolidate our competitive advantages, explained Antonio Ferraioli. Very demanding quality standards, the capacity to produce large volumes at competitive prices, executive oversight that complies with best practice recommendations, and a daily commitment to sustainable development: these points are all considered as priorities, particularly in a number of our outlet countries. In the United Kingdom, Scandinavia, and generally in northern Europe, consumers are very sensitive to these issues. So this should allow us to remain in a leading position worldwide for private labels."
Antonio Ferraioli, CEO, La Doria 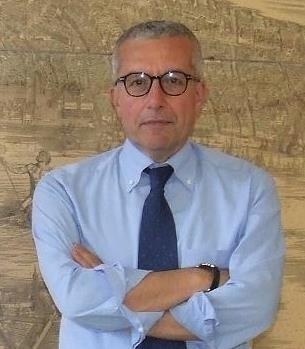 "Competition in the food production sector is increasingly harsh. In the large-scale retail trade, there is an ongoing process of consolidation and concentration, with increasingly frequent takeovers and mergers. In addition, a number of centralized buying structures have been set up, partnership agreements have been signed and hard-discount retailers have spread rapidly – all of which have increased the negotiating power of retailers and put extra pressure on suppliers. In this scenario, La Doria intends to focus not only on quality, but also on larger volumes and economies of scale, on improving efficiency and on cost reduction."
"Up until now, we have invested in our Italian sites: a new production line for ready-to-use sauces and an extension of our automated warehouses in Parma, a new line for internally manufactured canned products and carton-packaged tomato products at other production sites, a logistics hub and an automated warehouse in the United Kingdom, where our subsidiary LDH operates..."
"This year, we are expecting a turnover of EUR 689 million, and half-yearly results have increased our confidence. By 2021, we expect revenue to reach approximately EUR 757 million, with a net result of EUR 43 million."
"This investment plan will be reviewed each year according to a number of variables: primarily, how harvest seasons progress, along with our tomato processing activities, as our "Linea rossa" line accounts for one third of our industrial sales. But the effects of the Brexit agreement and of the current trade wars will also need to be evaluated." 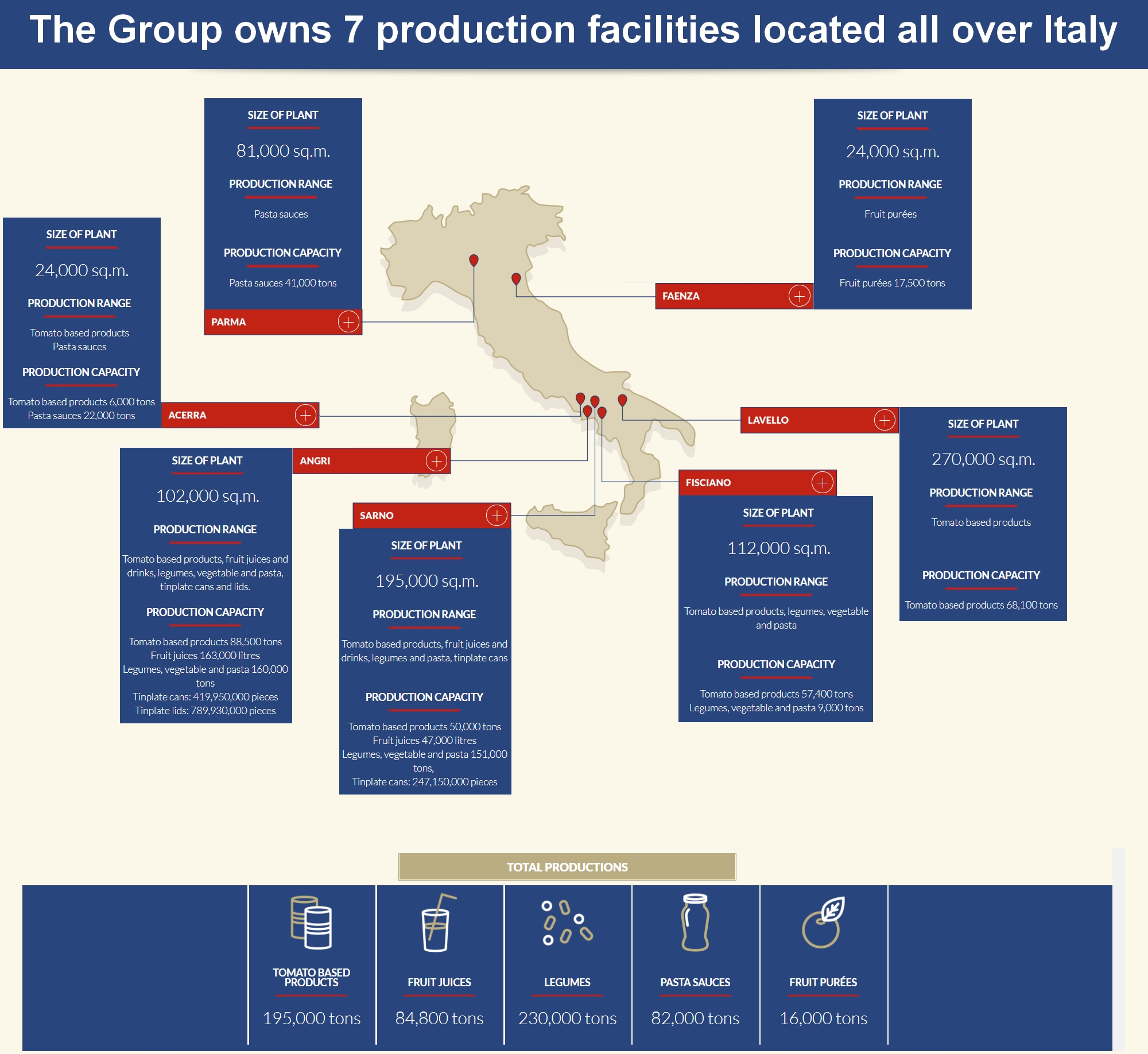