Iran: the impact of the US sanctions

Tomato paste is not necessarily the most obvious economic indicator, yet the fact that this basic food item can actually be subject to "panic buying" by a certain proportion of the Iranian population is indicative of the impact of recent American trade sanctions.

Whereas Iran has an industrial processing capacity that has absorbed as much as 2.4 million metric tonnes of fresh tomatoes in recent years and can produce consequential quantities of paste from the raw materials harvested within its borders, it seems that the sanctions imposed by the US administration have disrupted the supply pattern.
Indeed, Washington has reintroduced retaliatory measures against financial exchanges with Iran, and against several sectors, including the steel and automobile industries, which had been lifted in exchange for commitments from the Iranian government to limit its nuclear program.

The collapse of the Iranian currency in 2018 – a 70% drop! – caused a rush on foreign currencies, which has had the consequence of making the activity of exporting processed tomato products a lot more profitable than their sale on the domestic market. And US restrictions on Iranian exports of oil, which are expected to be implemented in November, have raised fears of an economic crisis even worse than the one that hit the country between 2012 and 2015.

A number of shops have been forced to limit the purchase of tomato paste, which is used in many traditional Persian dishes, though stocks of a number of product categories have run out in recent weeks. According to the Iranian online purchasing site Digikala, stocks of the nine main categories (type, quality, conditioning, etc.) of tomato paste had already run out at the beginning of October and a number of other tomato products were expected to run out shortly. In an attempt to limit the economic instability and to prevent the crisis, the government has reacted by suspending exports of fresh tomatoes, a measure that has led to a number of complaints and actually promoted trafficking, notably towards Iraq. The price of raw tomatoes has increased five-fold since the end of 2017.

In the same way, the price of many imported products has rocketed in recent months, particularly for electronic devices, but also for a number of locally produced basic products like bottled milk (from IRR 15 000 in 2017 to IRR 36 000 this year), or cans of tomato paste in 800 gram packs, which were selling for about IRR 60 000 in Teheran stores in March but are now going for IRR 180 000 (EUR 3.69 or USD 4.28 at the official rate – but only USD 1.24 at the unofficial rate). For experts of the Iranian economy, "there is an emerging consensus that the economy will go through a period of austerity similar to that recorded during the Iran-Iraq war.”
According to Mir-Razavi, President of the Canners' Union, the price of packaging has been multiplied by four, and the measures taken by authorities to slow the outgoing flow of currency have considerably limited the volume of imports, particularly those that used to allow processing plants to source their equipment. At the same time, retailers are reluctant to implement the price reductions imposed by the government, and have been speculating on the possibility of a further increase in prices.

Exchange rate for the Iranian rial to the US dollar on the unofficial market
The International Monetary Fund recently commented on the situation, estimating that the Iranian economy is likely to suffer a contraction of 1.5% this year and of 3.6% in 2019, before recovering slowly. In this analysis, the recession would be less pronounced than in 2012 (-7%) and cause less damage than the conflict with Iraq, which led to a contraction of approximately 25%.
In view of this hypothesis and under certain conditions, Iranian economists estimate that if European nations were able to set up a special system for payments that made it possible to continue trading with Iran, the economy could start to progressively recover over the coming year. A lot depends on US sanctions, which could increase in severity and whose objective is to penalize Iranian oil exports and other strategic commodities.

In the meantime, supermarkets in the Iraqi city of Najaf have had no problem continuing to regularly supply Iranian-made tomato paste in sufficient quantities. Iranian exports of pastes do not yet seem to have been overly affected by the political crisis, with volumes that have amounted to more than 130 000 metric tonnes over the 2017/2018 marketing year. This result is 12% lower than the previous marketing year (148 300 mT) but, driven by the gain in competitiveness linked to the weaker Iranian rial, it is practically identical to the average of the three preceding marketing years. Given the results of processing operations in recent years, it is probable that Iran's foreign trade in this sector will be more impacted by the collapse of processing volumes in 2018 then by the USA's trade sanctions.
Iranian exports continue to find their main outlets within a limited geographical range. Last year, like for the nine previous marketing years, Iraq and Afghanistan absorbed almost all of Iran's foreign sales of tomato paste. Exports to Iraq accounted for 65% (79 900 mT) of the total trade, which is almost 10% lower than in 2016/2017, but close on 3% above the average of the three previous marketing years. Afghanistan imported about 43 000 mT of Iranian paste, which is 6% more than in 2016/2017 and close on one third more than the three marketing years of the period running 2014-2017.
To a lesser extent, other countries (Russia, Turkmenistan, Kazakhstan, Pakistan, the Emirates, Kuwait, etc.) also feature among the main outlet markets for Iranian pastes. 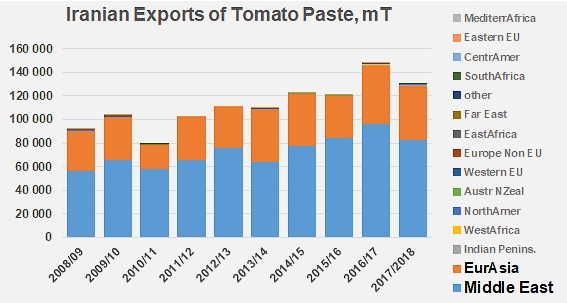 Iran's exports (and imports) of canned tomatoes and sauces are virtually nonexistent. In fact, the Iranian trade balance for pastes can be taken as the total trade balance, with a result for the 2017/2018 marketing year that amounted to USD 185 million, which is 10% down on 2016/2017 results and 7% down on the results of the three previous marketing years. 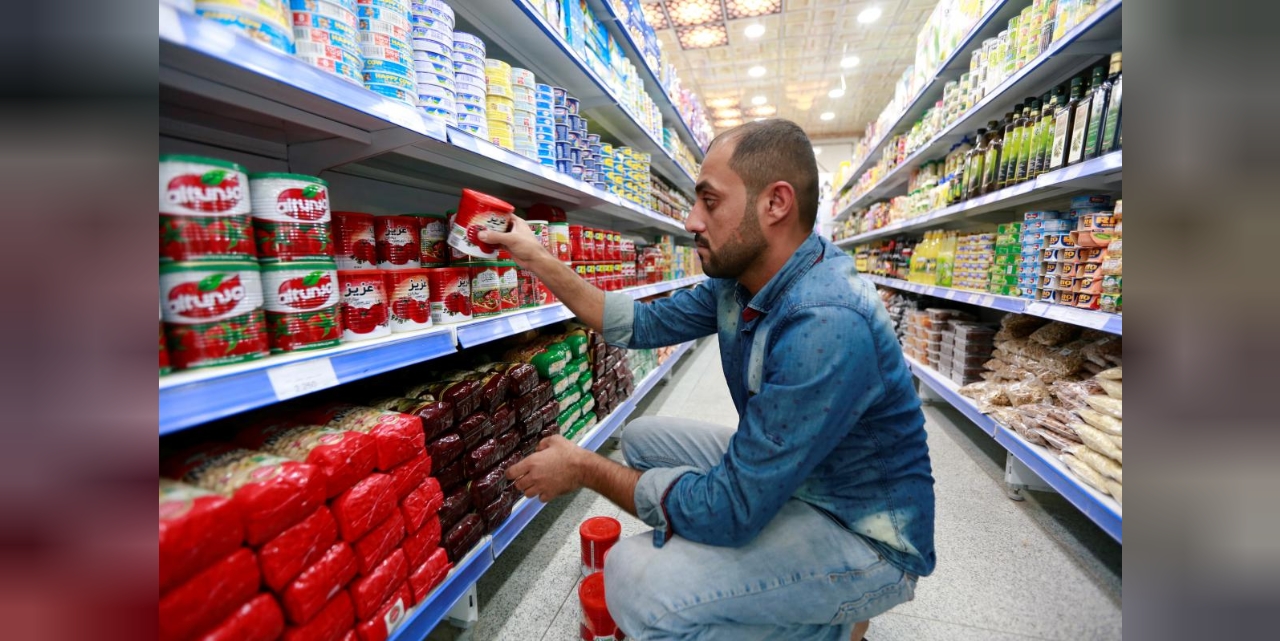 October 2018: Iranian cans of tomato paste being positioned on the shelves of a supermarket in the city of Najaf, in Iraq.

Some complementary data
Evolution of processed volumes in Iran since 2003.

Evolution of Iran's trade balance over the past 10 years. 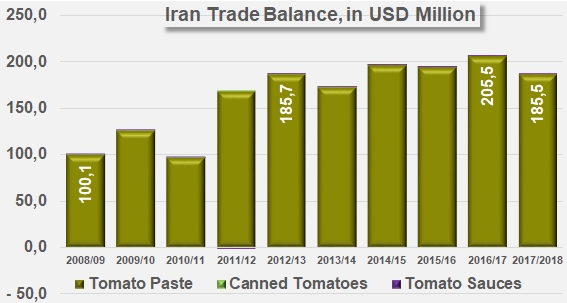