Imports of Ukrainian products: the answer of the EU

05/06/2019 - François-Xavier Branthôme - Read in French
The specialized press in Europe has been reporting in recent weeks on concerns raised within the tomato processing industry, particularly in Italy and Spain, regarding the major increase in shipments of Ukrainian tomato paste to European countries.
In a written question submitted by European MPs Ramón Luis Valcárcel Siso (EPP) and Gabriel Mato (EPP) sent on 20 February 2019 to the European Commission, the Spanish representatives referred to the "damage" being inflicted on the European industry.
Here are the terms of the question submitted by Mr Valcárcel Siso and Mr Mato:
”The first preferential quota for Ukrainian tomato products came into force in April 2014. Since then, tomato exports from Ukraine have increased from 1 894 tonnes to more than 40 000 tonnes in 2017, significantly in excess of Ukraine's quota of 13 000 tonnes. In Spain, the second-highest producer in the EU after Italy, serious concerns are being raised as to the damage that tomato exports from Ukraine could cause to the sector.
What is more, tomato exports from Poland, which is the largest importer of tomatoes from Ukraine, are increasing exponentially, having jumped from 3 800 tonnes in 2012 to 21 370 tonnes in 2017.
Has the Commission reviewed the issue of Ukrainian exports and the possibility of suspending the concessions granted to Ukraine, with a view to halting the damage that the massive exports are causing to EU tomato growers?”

In late April, Mr Phil Hogan, EU Commissioner for Agriculture & Rural Development provided an answer to the question raised by MEPs Ramón Luis Valcárcel Siso and Gabriel Mato regarding processed tomato exports from Ukraine:
“The European Union has granted Ukrainian processed tomato products (CN 2002) a 10 000 tonnes quota under the Deep and Comprehensive Free Trade Area (DCFTA). In addition, EU has opened a 3 000 tonnes quota for processed tomato products from Ukraine under the autonomous trade measures (ATMs) in force since 1 October 2017.
While the imports of processed tomatoes from Ukraine increased between 2014 and 2018 (from 11 000 to 40 000 tonnes), total EU imports of processed tomatoes during the same period decreased from 281 000 to 260 000 tonnes. While the DCFTA concessions are bilateral and of permanent nature, the ATM concessions are unilateral and valid only for 3 years since their entry into force. The decision of granting or prolonging ATMs is based on a variety of factors, including assessing the competitiveness of the concerned sector in the EU.
The European Commission is closely following the evolution of trade with Ukraine; the end of the period of validity of the ATMs will offer the opportunity to assess the situation of the market in this specific sector.
As regards trade in processed tomatoes, Polish exports of processed tomatoes to the other Member States are stabilised around 15 000 tonnes since 2016 and to the rest of the world around 2 000 tonnes since 2014.”

More recently, Commissioner Hogan made a new reply on a similar Parliamentary question regarding the Ukrainian exports of processed tomato to the EU, which is very much in line with the previous one. It is also important to note that in March, according to Foodnews, the Agrarian Union of Ukraine (ASU) has asked the EU to increase tomato paste import quotas to 50,000 tonnes from the current 13,000 tonnes.
In a letter, ASU pointed that “Ukrainian producer of tomatoes and tomato paste is in a very uncompetitive position compared to producers of similar products in the EU. While state subsidies cover up to 20% of the value of European producers' products, imposing an import duty of 14.4% on Ukrainian products increases the real difference in the cost of production of Ukrainian and European tomatoes to 34.4%.” ASU described its request as “a condition for fair competition in the European market”.

Some complementary data
Purely for information, the Tomato News editorial team hereafter presents the most recent official figures regarding the origins of imported tomato pastes for the 28 countries of the European Union as a whole. These figures are supplied by the customs authorities of each of the 28 member states of the EU. 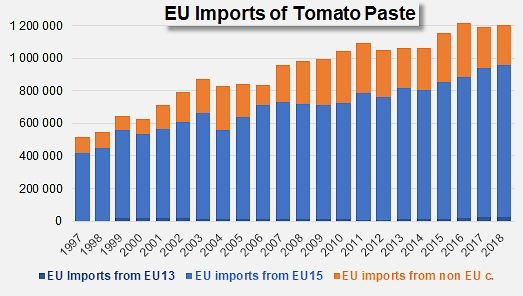 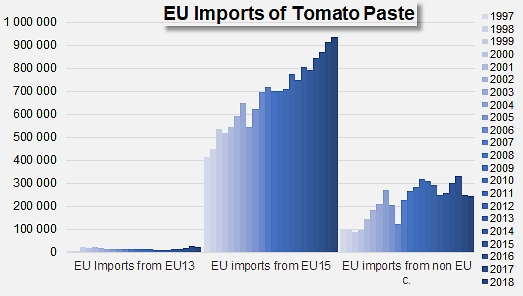 Over the past 22 years, European imports of tomato pastes have always been mostly supplied by intra-Community shipments obtained from countries that are leaders of the European industry (Italy, Spain, Portugal, etc.), and to a lesser extent from third-party countries (China, California, Turkey, Ukraine, Egypt, Chile, etc.). 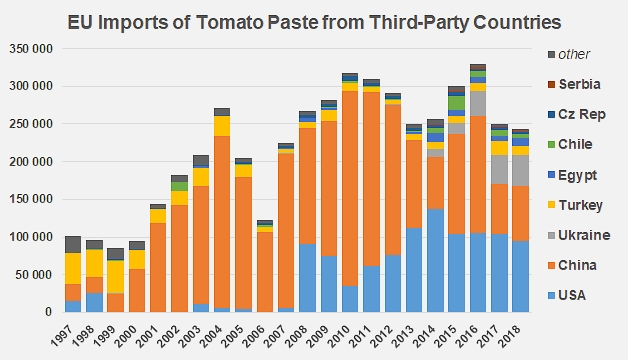 After being dominated for a long time by the Chinese industry, the proportion of European imports being sourced from third-party countries is now shared between products from the USA, from China and, to a lesser extent, from Ukraine, Turkey, Egypt, etc. In 2018, out of 1.2 million mT of finished products imported, 244 000 mT approximately came from non-Community countries, which is a slight drop compared to the volumes recorded in 2017 (251 000 mT approximately) and a sharp drop (-17%) compared to the average of the three previous years (293 000 mT, between 2015 and 2017).
Ukraine was virtually absent from the group of countries that supplied the EU until 2012, then accounted for 1% of those supplies in 2014, 2.7% in 2016 and approximately 3.3% last year.

The proportion of products from non-Community countries among the paste imports to the EU28 has tended to drop since 2010. 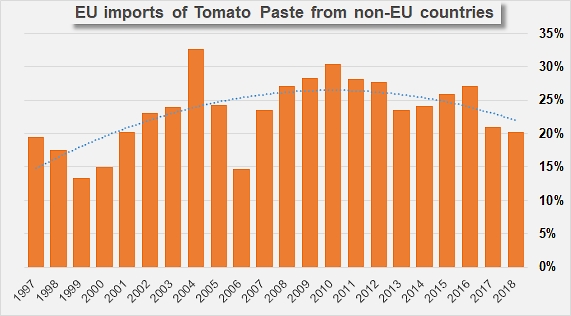 For information, import patterns of the 28 member states of the EU, according to the country of origin of tomato paste imported in 2018. 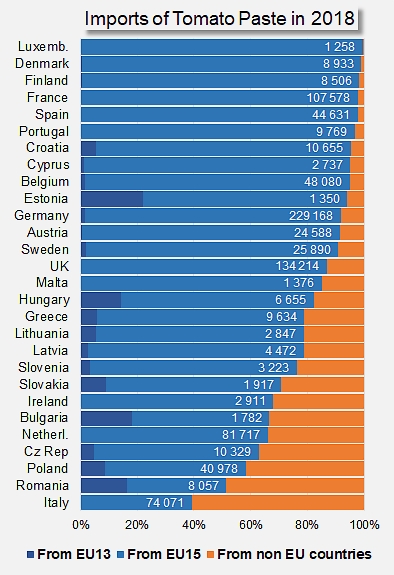