31/01/2020 - Press release , François-Xavier Branthôme
Tomatoes for canning as whole-fruit, chopped or as puree, is a huge business, with official figures pointing to global volumes of around 37 million tonnes. Some 10 to 11 million tonnes are harvested in California, which, with 100 000 hectares, is the world's largest producing region. The WPTC estimated the European processing tomato output at around 17 million tonnes last season, of which 4.85 million tonnes came from Italy, the second largest producer worldwide. Italy's tomato output even exceeded China's 4.3 million tonnes, which ranked that country in third-place.
Italian tomatoes and many other crops grown in various European and eastern countries are harvested by machines assembled in Italy. Processing tomatoes in Italy are grown on roughly 65 000 to 70 000 hectares, and it is easy to spot self-propelled harvesters in the fields during the season, which generally starts around mid-July and ends late-September in the main growing regions of Piacenza in the west, Ferrara in the east and Foggia in the south. Many of these machines are supplied by Guaresi. One of the two main Italian manufacturers, the company's 34-strong staff are based at premises on the outskirts of the town of Pilastri di Bondeno, in the northern province of Ferrara. Founded in 1932 by Idalgo Guaresi, the grandfather of current company president Massimo Guaresi, the initial focus of the business was to make small equipment for the sugar-beet, maize and wheat industries. There used to be four sugar factories within a 20 km radius of the town, and it was not long before the firm started making one-, two- and three-row sugar-beet harvesters. 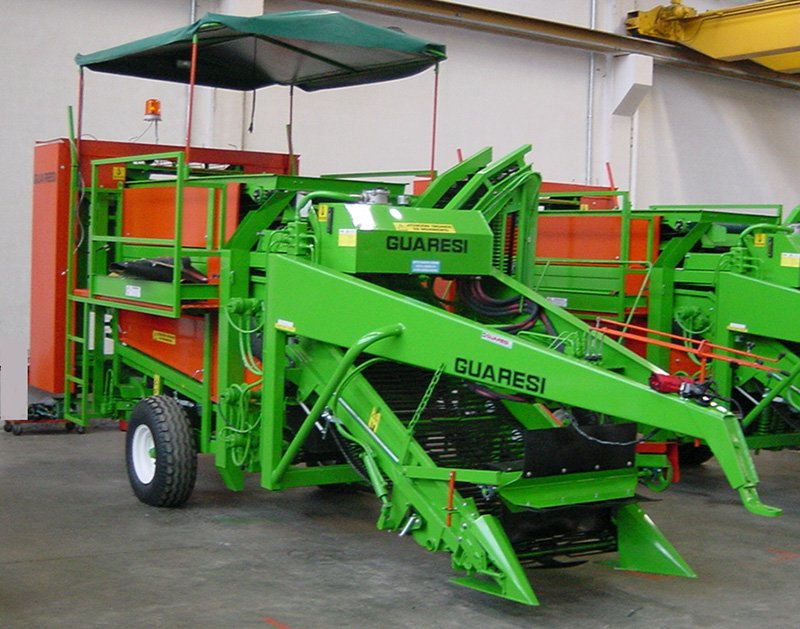 Many of the sugar factories closed in the 1980s, and to fill the void, the company developed its first towed tomato harvester, the G84, in 1984. Then, with eight worker-stations for manual sorting, the company's first self-propelled tomato harvester, the C85, was ready the following year.
Eight pickers were also needed on the larger one-row self-propelled version that ensued in 1989, which had a maximum output of 6 to 7 mT/hr. Since 1989, the firm's machines have been fitted with a shaker developed and patented by the University of California and manufactured by self-propelled tomato harvester maker Howard Johnson. Heralded as a real game-changer, the first Guaresi model fitted with the technology had the name to match: the G89 Revolution. With a capacity of 25 mT/hr, the Italian company sold ten of these machines in 1990. Further refinements (new electronic optical sorter and auto-levelling) led to the development of the G89-93 in 1993. This was a massive hit, especially in China, which imported nearly 300 of the machines. Guaresi rolled out its last towed harvester in 1992, with subsequent focus being exclusively on self-propelled machines, which are built at company headquarters. Complete frames are made and painted by an external supplier, leaving Guaresi to assemble the rest of the harvester. Many of the main components are sourced in Italy, but all the webbed conveyors come from Dutch firm Broekema.

The market for new harvesters is linked to tomato prices: when they are good, the demand for new harvesters is higher. Prices did not increase significantly in 2019 and the company received orders for around 40 machines – well down on the best ever year of 2009 when it produced 146 machines. The reason for these higher numbers was the Chinese demand, which up until two years ago was the single largest market for Guaresi. In 2008, it supplied China with 85 harvesters, with a total of 350 units shipped to that country by 2015. Tomatoes and cotton are major crops in China, and if the price of one of these crops increases, then growers plant more of it. Prices paid for Chinese tomatoes have been in freefall in recent years, while cotton prices have been increasing.
On a more positive note, tomatoes are always being harvested somewhere in the world, and when the northern hemisphere campaign ends (the Brazilian crop is harvested at the same time), the southern hemisphere season starts in Australia, Argentina, Chile and New Zealand. This year is expected to be the first in a long time when global tomato production will fall short of consumption. This is good news for growers and manufacturers of self-propelled tomato harvesters as it means that tomato prices are forecast to rise in 2020. 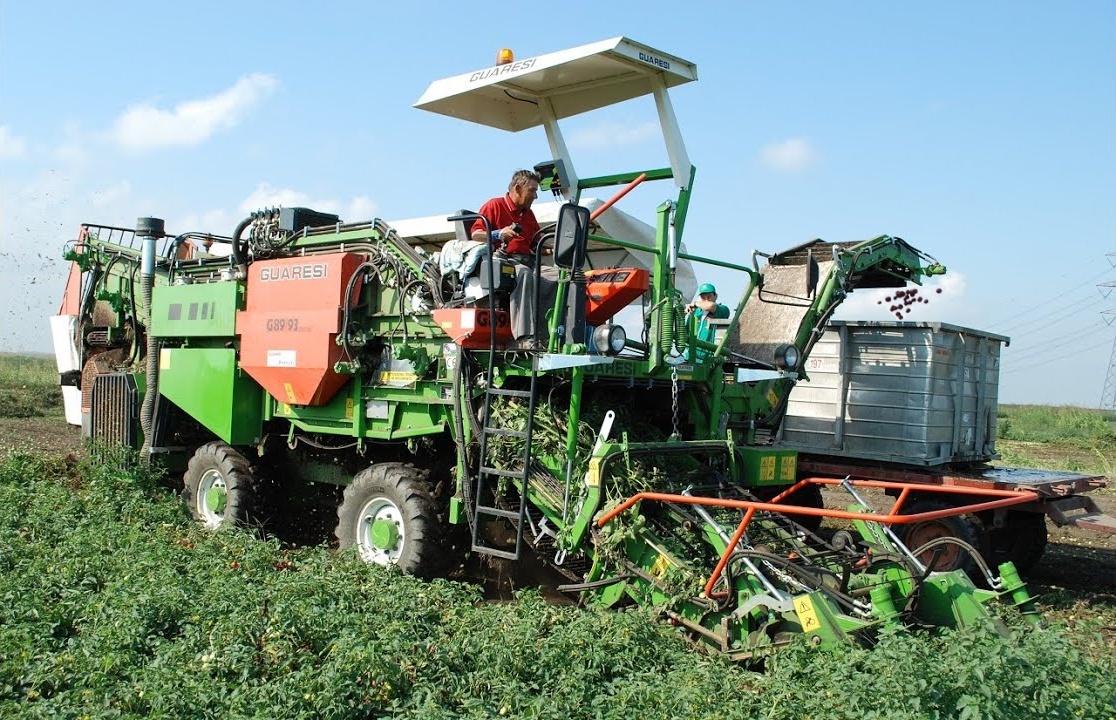 Guaresi G89/93 DS 32"
All Guaresi harvesters have been named as the Super since 2011, which evolved into the Super G in 2016. All machines are currently powered by a 238 hp Stage IV FPT engine. There is also a Super G48MS model, with the simple MS being a mono electronic optical sorter while the DS (Double sorter) is fitted with two such devices. The 48 refers to the width of the sorter in inches, simply because the first optical sorters were developed in California, and this has remained the industry standard. Guaresi also offers the Super G with 40” electronic optical sorters. The 30% extra capacity of the wider width makes it popular, but it comes at a price: the G43 is 3.5 m wide, so requires a front and rear escort on roads: the 3.0 m G40 does not need such an escort.
In Italy, the company sells its harvesters directly, but uses importers in all other important markets, including Turkey, Iran, Portugal, Spain and Ukraine. The firm’s biggest customer is in Ukraine, where a 6 000 hectare farm functions with no fewer than 11 self-propelled Super G harvesters.

Harvesters powered by six-cylinder 238hp FPT engines generally consume 16-20 liters of fuel per hour, and are equipped with a 200-liter diesel tank that provides sufficient capacity for a 10- to 12-hour day. Depending on the number of trucks, growers can hope to harvest 8 hectares per day, and each of the 13 tonne harvesters is capable of covering 200 hectares in a season.
All the equipment on the harvesters is powered hydraulically using Sauer Danfoss pumps. There are nine of these in total. The hydrostatic drive provides two field speeds (0-6 km/hr and 0-11 km/hr), and on the road the Super G can travel at a maximum of 30 km/hr. Harvesting is generally carried out at speeds of 4-5 km/hr. At the front, a series of full-width dividers raises vines from the ground, the stems of which are then sliced at the bottom by reciprocating blades. Two ground-driven rollers behind them prevent the blades from cutting too deep.

Complete plants are then elevated to the center of the machine along a 1.2 m or 1.5 m wide elevator, depending on specifications. At the top, the harvested material passes through one of the most important parts of the harvester – the shaker. This is where tomatoes are stripped from the vine by 360 rotating and vibrating rubber fingers. The shaker rotates at a maximum speed of up to 20 rpm but is usually set at 6-8 rpm, while the frequency of vibrations can be varied from 0 to 650 per minute. Like the rest of the elevators and picking devices on the harvester, the shaker on the 48 model is 1.5 m wide, while the 40 model has a 1.2 m wide pick-up and shaker. Plant waste material is ejected out through the rear of the harvester and most buyers tick the chopping system in the options list, which cuts the plant material into 10-12 cm pieces that fall to the ground and can be easily ploughed back into the soil.
Tomatoes travel on a slatted conveyor past an air cleaner, and onto a cross conveyor to the sorting area. Most harvesters are fitted with two electronic optical sorters. When there are no stones (like in sandy soil), sensors are set to detect unripe green and orange fruit. Using a combination of green, red and infra-red LEDs, the parameters are endless, and anything the sorters do not recognize is ejected by a series of rubber fingers, each one activated by an air-operated cylinder. The feed belt runs at 65 m/min and the fingers can theoretically reach a remarkable 33 movements per second. In practice, though, this never happens, as it would result in practically every tomato being ejected. Guaresi used to buy its optical sorters from the US, where it also bought the shakers. These days, though, it makes them in partnership with an Italian company. Guaresi makes the reject box, while the partner manufacturer makes the electronics. The optical sorter that is positioned first in line does most of the work and it is then generally swapped with the rear one at the end of each season. There is no hopper on the harvester, and the pick-off table allows clods of earth and green or deformed fruit that may have escaped the optical sorters to be removed by hand. 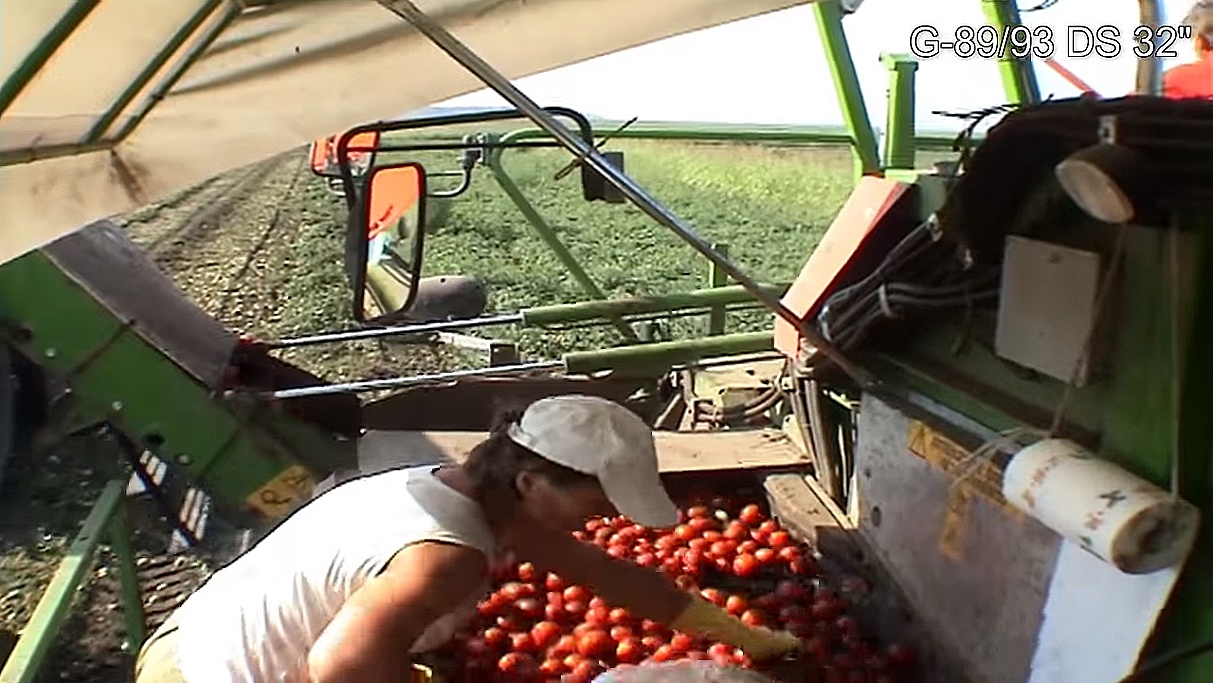 After the final pick-off table, tomatoes roll onto the discharge elevator. Once again, extra width means more capacity and the elevator on the 48 model has a width of 1.02 m (82 cm on the G40). The steady stream of tomatoes fills trailers containing half a dozen stainless steel bins, each with a capacity of 5 mT, so a full trailer weighs 30 mT. Trailers are dropped off at the headland and picked up by road transport trucks.

The question as to when harvesters need updating depends on tomato prices. Making money from the crop was easy in the 1990s, but today things have changed. It costs between EUR 5 000 and 5 500 per hectare to grow tomatoes, and in 2019, net prices paid by processors were around a mere EUR 80 /mT. An average yield of 70 mT/ha leaves a profit of just EUR 600 per hectare, which is why all growers are looking to increase their outputs to 90 mT/ha and even 100 mT/ha.
If all goes according to plan, then tomatoes are still profitable at these higher yields, but the risks are huge and a series of severe thunderstorms decimated many crops last season, leaving growers to try to claim some compensation from their expensive insurance policies.
Owners normally write off tomato harvesters for tax purposes after five years, but it is the growers who keep the machines for longer who profit the most, and many G89s have been running for many years and thousands of hours. One even notched up 16 000 hours over 20 years in New Zealand before it was part-exchanged for a new harvester.
Depending on the level of specifications, the new Super G48DS list prices range from EUR 260 000 to 300 000. The higher price includes all of the options (cab, two optical sorters, central greasing system and rear vine-chopper) and is the most popular in many parts of the world. That Italy is a crucial market for Guaresi is evident from the numbers. Some 900 of the 2 600-odd self-propelled machines delivered so far by the firm have been sold on the domestic market. However the total Italian market this year was for just 35 to 40 machines. Guaresi is not alone in fighting for a share of this market as it seeks to make some 30 units per year. Looking ahead, Guaresi reckons that the total global market this year (2020) is likely to be a maximum of 100 units. 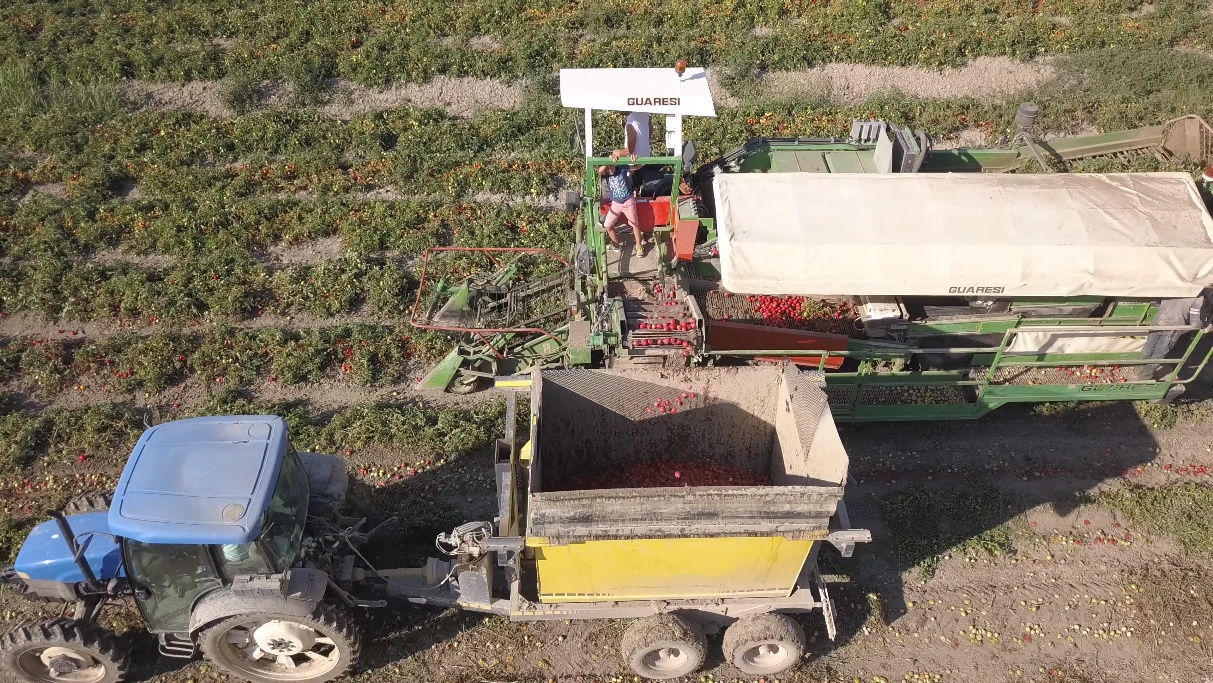 A recent video is available at:
https://www.youtube.com/watch?v=6ky9gNE6GII 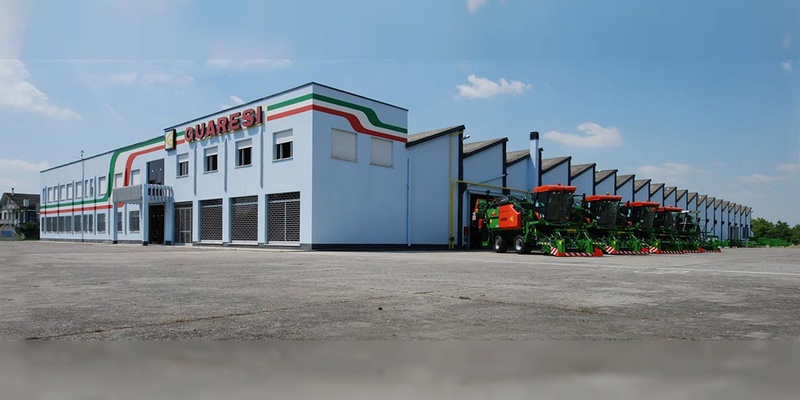