28/01/2021 - WPTC , Sophie Colvine - 2021 Season
The WPTC will only release its first global world production estimate mid-February but a preliminary forecast is already available from some countries.

AMITOM countries
Egypt
The initial forecast for 2021 is 440,000 tonnes with no decrement in planted acreages. Water is available as usual thanks to the Nile river. According to the two signed cooperation protocols with the ministry of agriculture in Egypt and Egyptian Countryside Development Company, Paste & Juice Co. will contract thousands of acres in the governorates of upper Egypt to secure the needed quantities of tomatoes for processing for operating over 300 days annually as planned

France
It is too early to have a precise estimate, but it is expected that more hectares will be planted and especially for organic production. The volume contracted should be at least 150,000 tonnes but could reach 180,000 tonnes.

Greece
The surface planted should increase by 10% which means that if weather conditions are good the total volume could be 460,000 tonnes.

Italy
North – Precontracts were already made at the end of 2020 between processors and Pos. It is expected that surfaces will increase by about 1,300 hectares of which some will be organic. Processors are keen to increase production due to low stock and the need for more retail packaging. The current expectation is a production of 2.8 million tonnes.
South – The expectations are not yet clear as there were no precontracts and the 2020 crop was not a good one. Current expectations are in the order of 2.5 million tonnes.
The overall forecast for Italy is therefore 5.3 million tonnes. Price negotiations started this week and it is expected that prices will increase slightly with the larger volume and increase in prices for other commodities.

Portugal
The current estimate is for 1.4 million tonnes to be processed in 2021. Processors are in the final stages of the negotiations with growers. The winter was a bit too dry but also cold which is normally good for the crop.

Spain
The expectations are that the crop size could be 2.9 million tonnes and it is too early to confirm this forecast because of the uncertainties over water availability. If it does not rain by the end of March, the surfaces planted and thus the volume harvested will be reduced. It is currently raining but more rain will be needed in the coming weeks. The negotiations are ongoing and an increase in price is expected.

Ukraine
The 2021 production should remain at a similar level as in 2020 at about 800,000 tonnes. The current lockdown makes discussions with the growers difficult at the moment.

Other northern hemisphere countries
In California, the USDA/NASS report released on 25 January (see specific article) indicates that as of January, California’s tomato processors reported they have, or will have, contracts for 12.1 million tons (10.97 million metric tonnes) in 2021, which is an increase of 6.1 percent compared to the 2020 contracted tonnage of 11.4 million tons (10.34 million metric tonnes) reported in the August 2020 California Processing Tomato Report. Processors estimate that the contracted production for 2021 will come from 240,000 acres (97,125 hectares), generating an average yield of 50.4 tons per acre (113 metric tonnes per hectare). The contracted planted acreage forecast is up 2.6 percent compared to the 2020 acreage of 234,000 acres (94,696 hectares) reported under contract in August. 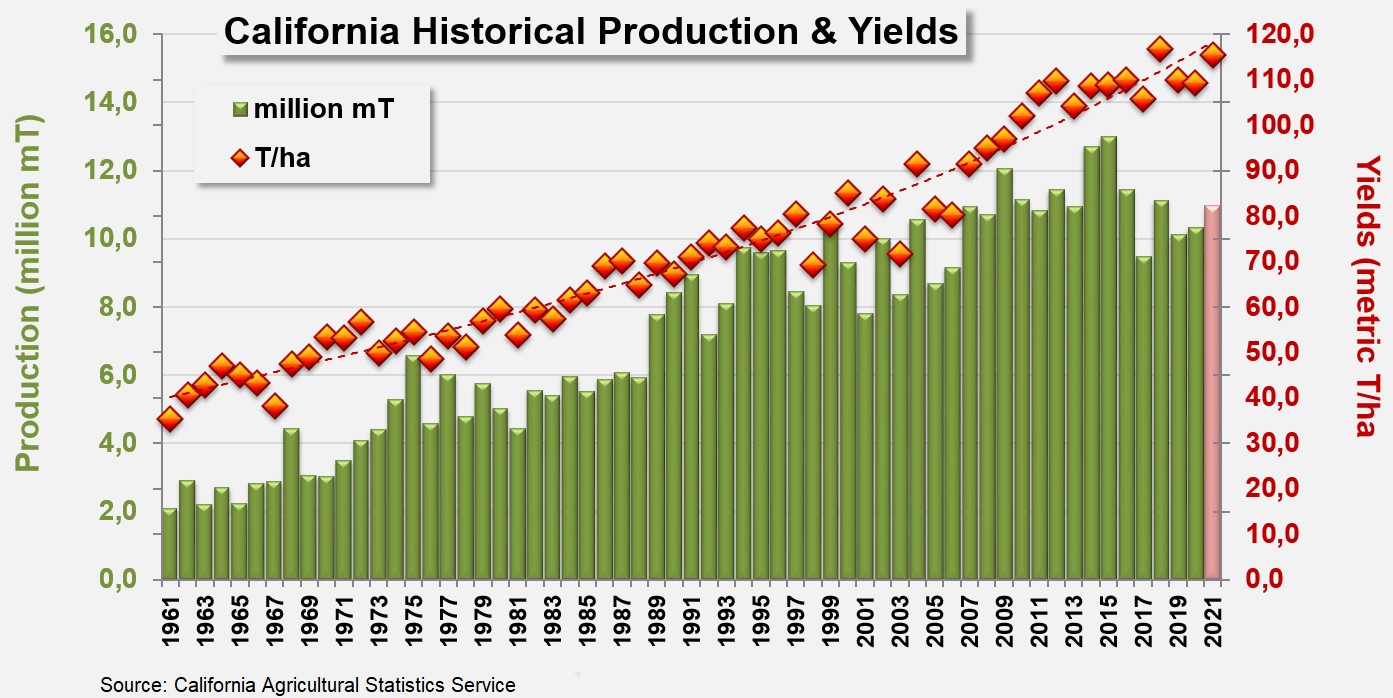 Southern hemisphere countries
In Argentina, the beginning of harvest during the end of December and January was very successful in San Juan because the weather conditions were dry with no heat waves and with excellent planning of harvesters and loads. Weather conditions have been dry also in Mendoza, therefore, the forecast remains 540,000 tonnes for this season.

In Australia, the total crop volume remains at 241,000 tonnes with processing set to begin on Saturday 30th January. Growing conditions have been relatively good, with only isolated thunderstorms to date and temperatures have generally been relatively mild. There is some incidence of disease (bacterial spec and fusarium) that has frustrated most growers but hopefully will not result in any significant yield loss.

In Chile, crop development is good on the 12,200 hectares and harvest is due to start next week. The expected yield is 98 t/ha and a total volume of about 1.19 million tonnes. The weather is hot and dry. Until now, water availability is normal but there are some restrictions. However, drip irrigation now represents about 70% of the surface, planted, up from only about 20% five years ago, so water need is reduced.

In Peru, ICATOM maintains its expectation to produce 100,000 tonnes of tomato on 800 hectares, the same as in 2020.
Related companies