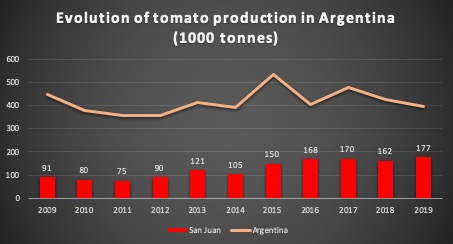 During the 6thArgentinian Processing Tomato Meeting held in San Juan on 11 & 12 June, the San Juan Secretary of Agriculture and Livestock, Ariel Lucero Reinoso, presented the evolution of the production in the province and its future potential. he highlighted that the region benefits from a good climate for growing tomatoes, land availability and a good irrigation network. With government incentives and the assistance of the interprofessional organisation Tomate 2000, surfaces planted with tomatoes for processing have increased from 1,000 hectares in 2009 to 1,954 hectares in 2019, with yields growing from an average of 70 t/ha in 2009 to 88 t/ha in 2019, but they exceeded 105 t/ha in 2016 and 2017, highlighting the agronomic potential of the region, although weather issues can sometimes reduce production (300 hectares were lost to hail in 2018).

Over the last decade, the production increase was linked to the increasing use of technologies in the sector with 100% of growers now using drip irrigation, while 80% of the harvest and 60% of transplanting operation are now mechanized. Some of this progress was obtained by using the service of contracting private companies bringing equipment from Brazil in the counter season.

The region benefits from weather conditions which could enable to extend the harvest to up to 130 days. The government of San Juan is encouraging olive and vineyard farmers to switch to growing tomatoes for processing as it is the crop which can bring them the best yields and profitability.  One of the challenges is to find the best crops for rotation which are also profitable in the region such as forage (hay, alfalfa) or corn.
The growth of the tomato production in the region is, however, hampered by the limited processing capacity in the area which is about 110,000 tonnes. In 2019, La Campagnola (Arcor) processed 85,000 tonnes, Almar about 8,000 tonnes, while smaller companies totalled 2,000 tonnes. The rest of the production in delivered to factories in Mendoza.

The Government of San Juan is developing favourable conditions for investors invest in the region, notably through offering credit at very favourable rates, and hopes that the 14thWorld processing Tomato Congress which will take place in the town of San Juan in March 2020 will help showcase the region potentials to feature on the global map. 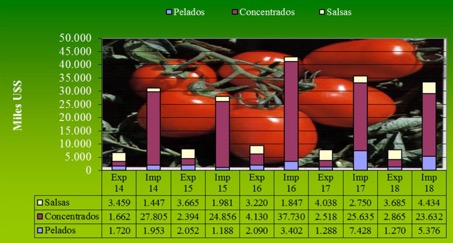