Green light for the construction of a new processing plant
As announced by Tomato News in articles published in July and September, a new factory will soon be opened in the province of San Juan, in the 9th of July Industrial Park. At the beginning of October, local authorities validated the permit request regarding the environmental impact of the installations and put out a call for tender for the construction of the plant.
The new installation will be built at a cost announced at ARS 150 million (Argentinian peso) (USD 8.5 million, EUR 7.3 million) and should cover an area of about 10 hectares, which is approximately one quarter of the available industrial park. The factory's processing capacity is expected to reach 1 000 metric tonnes per day of raw tomatoes, for a planned annual production of 50 000 drums of diced tomatoes, 25 million Tetra Pak-style packs of purée, 25 million doypacks of tomato sauce and 50 000 drums of tomato paste.
The government, which is the prime contractor and initial owner of the site, will hand over the operation of these installations to a group of growers who have formed a cooperative.

San Juan: Production has quadrupled over the past 12 years
The installation of this new plant is part of an explicitly stated national development objective, which has been implemented in recent years by the Argentinian processing tomato industry, with the region of San Juan as a particularly clear example.
With the constant expansion of surfaces dedicated to tomatoes over the past 10 years, regular investments in technology and the achievement of high yields in recent harvests, processing tomato cultivation is currently transforming the agro-industrial context of this region. According to figures released by the Argentinian ministry for agriculture, the surfaces dedicated to processing tomatoes for the 2018 harvest around San Juan will increase by 300 hectares compared to 2017 and reach 2 000 hectares, for a potential harvest of 210 000 mT of tomatoes, four times more than in 2006 (approximately 50 000 mT grown on 800 hectares). If the forecast of 6 000 hectares of total surfaces planted in Argentina in 2018 is actually verified, the San Juan region will be responsible for at least one third of the country's total production (against only 10% in 2006), probably even more than that, given that the region's yields are among the highest in the country. The production of the San Juan region, which only accounted for about 21% of national consumption just two years ago, should next year cover close on 30% of the 700 000 tonnes (estimate in farm weight equivalent) consumed every year in the country. 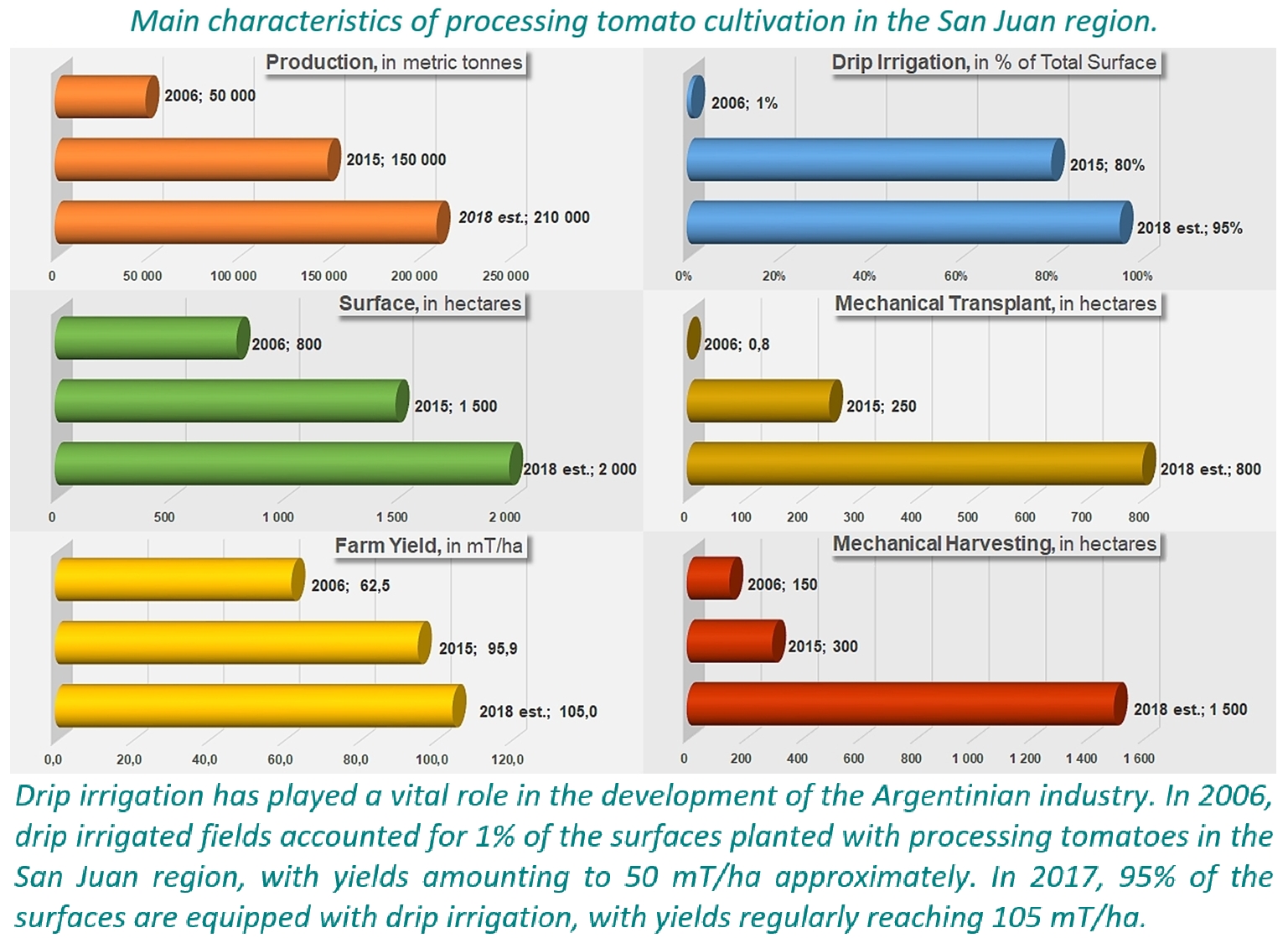 The reason for this development is to be found both in the extension of planted surfaces and the accompanying major increase in agricultural yields. While yields reached 62.5 mT/ha in 2006, they quickly grew to the point of closing in on 96 mT/ha in 2015 and recent developments indicate that the region could reasonably reach 105 mT/ha next year. This level of yields is by far the best throughout Argentina, whose average yields are closer to 77 mT/hectare according to the annual report on operations by the Tomate 2000 association, which works alongside the INTA (Instituto Nacional de Tecnología Agropecuaria). 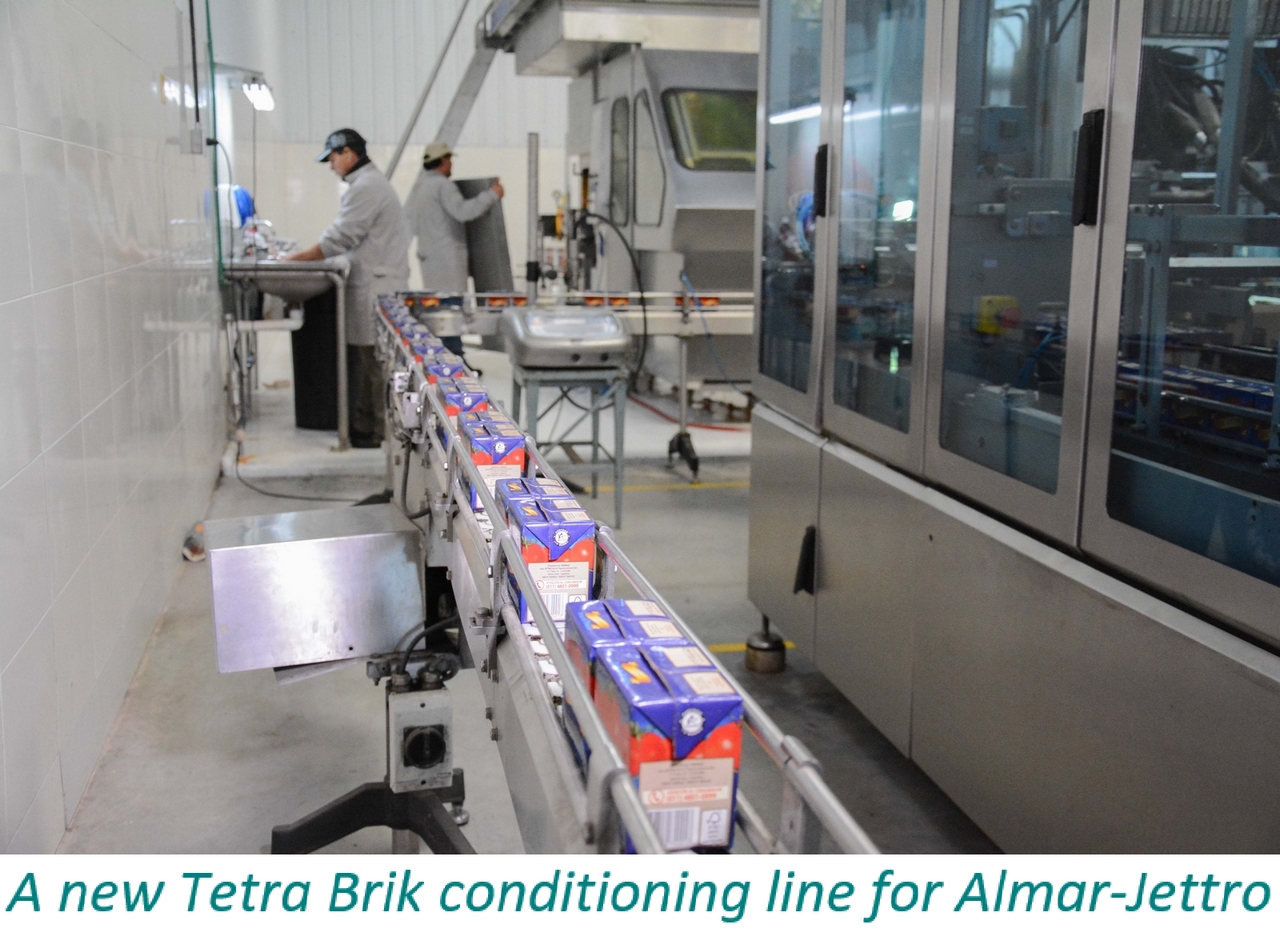 The increase in quantities has been accompanied by a notable development in industrial capacity. Until 2017, at least half of the volume of raw materials harvested in the San Juan region was trucked to the neighboring province of Mendoza to be processed. As from 2018, investments carried out in terms of installed capacity should allow the region to deal with about 70% of the processing requirements of its own raw materials, with the remaining 30% continuing to be transferred to factories in the Mendoza region.

Among these increases in volume, one deserves particular mention: the growth achieved by the La Campagnola company, which runs the biggest processing plant of the region and is a subsidiary of Arcor, with volumes that are expected to increase by 60% by the end of next season, growing from 70 000 tonnes in 2017 to 112 000 tonnes in 2018. Other plants have also extended their capacity, like Almar-Jettro, which invested in a new Tetra Brik line last May in order to evolve from 10 000 mT to 20 000 mT each year. Local sources estimate that in the end, the region will process all of the raw materials that it grows, with provincial authorities expecting complete autonomy for the sector thanks to the new state-owned factory by 2020, when surfaces planted with processing tomatoes will cover about 2 600 hectares in the San Juan region.

Update on the national situation in Argentina
On a wider scale, Argentinian results overall – presented in detail in the latest INTA report on changes occurring within the Argentinian industry – indicate a clear progression over the past 20 years, to which the work carried out by the Tomate 2000 association has largely contributed in terms of technical support and the transmission of expertise. This was recently highlighted by the Provincial Secretary for Agriculture, Ariel Lucero Reinoso, who estimates that this growth has been made possible by the adoption of integrated technology and new cultivars every year, by the progress achieved in preparing the soil and the reasoned use of inputs, by increasing mechanization of harvest operations and the generalization of irrigation, by the tight control of plant-health threats and, above all, by the integration of each different partner's contribution to the value chain. For the Secretary of Agriculture, "this has been achieved thanks to the creation 20 years ago of the Tomate 2000 association, which was founded to encourage research and the transfer of technology."

According to the latest reports from the Tomate 2000 association, "INTA 2016/2017", the production of processing tomatoes in Argentina reached 488 000 tonnes during the 2016-2017 season, grown on 6 195 planted hectares. This level of operations, which is the second largest after the previous historical record set in 2014-2015 with 535 000 tonnes, underscores a 20% increase in volumes (a growth of approximately 82 000 mT) and a 22% drop in planted surfaces (a decrease of approximately 1 709 hectares) compared to the previous season. In effect, the country's average agricultural performance reached the historical record level of 77 mT/hectare, half as big again (49.8%) as the level of the previous year (51.4 mT/hectare).
The joint effects of normal weather conditions in the Cuyo region (provinces of San Juan, Mendoza, San Luis and La Rioja (see appendices), which include 69% of the Argentinian surfaces dedicated to processing tomatoes), and more efficient implementation of cultivation practices and technologies have been the main reasons for this success. On the other hand, the notable drop in planted surfaces can mostly be found in the Mendoza region (-1 400 ha) after a very bad 2015-2016 season which was blighted by terrible weather conditions (rain and hail) and the withdrawal of two major processors (Baggio and IAMSA) for different reasons. Planted surfaces also dropped in the region of the Rio Negro.

Fortunately, agricultural yields increased sufficiently last year to compensate for the shortfall caused by the decrease in surfaces. In the province of Mendoza, discounting the 2016 season, yields have grown from 52 mT/ha in 2011 to close on 66 mT/ha in 2015, and have leapt to close on 88 mT/ha in 2017. Over the same period running 2011-2015, in the Rio Negro region, they remained close to an average of 50 mT/ha, while they progressed in the northwestern part of the country from 42 mT/ha to more than 50 mT/ha. But it is the San Juan region that is by far the most suited for growing processing tomatoes, as the average yields there over the past five years have climbed to 93 mT/ha and even reached 107 mT/ha last year.
This part of the country is largely responsible for making the Cuyo region into a major area for Argentina's processing tomato cultivation. 352 000 mT were harvested there on 3 655 hectares, which amounts to a yield of 96 mT/ha approximately and close on 72% of the country's production, against 286 000 mT on average for the period running 2011-2015, grown on about 4 460 hectares (65 mT/ha on average). The other regions share about 30% of the quantities produced in Argentina. Last year, factories in the northwest of the country processed 60 000 tonnes, while those in La Rioja processed 42 500 tonnes and those of the Rio Negro area only dealt with 35 000 tonnes due to heavy rains that severely disrupted the second half of the harvest.

According to available statistics, the trade balance of the tomato products sector was once again passive from January to December 2016. Exports absorbed 8 400 tonnes of products, for a value of USD 7.8 million, while imports amounted to 52 100 tonnes for a value of USD 48.1 million. The previous year (2015), exported volumes amounted to 8 050 tonnes for USD 1.8 million while imports only amounted to 27 800 tonnes and USD 30.9 million.
This sharp increase in the passive trade balance can be explained by the necessity to call on imports in order to satisfy domestic demand, which is currently estimated at approximately 700 000 tonnes (farm weight equivalent). The Argentinian industrial processing sector supplies mostly 30/32 Brix paste, intended for remanufacturing into purée, which is the main product consumed in the country. The country's overall production in this category – approximately 220 000 mT (farm weight equivalent) – is well below the level of demand, which leaves a large share to be covered by imported products. In this category, imports sharply increased in 2016 (44 150 mT, which is an 80% increase compared to the average of the three previous years), and the first semester of 2017 confirms this trend, with a two-fold increase in foreign purchases compared to the results of the first semester 2016. Last year, the paste category recorded a passive trade balance of about 41 000 mT of finished products, worth a total USD 40 million.
After a period of abundance running 2002 to 2011, this passive trade balance also affected the canned tomato category (whole peeled and/or diced), though to a lesser extent. In 2016, the Argentinian trade balance of this category was passive, with "net" imports of about 3 800 mT of finished products, a sharp increase compared to the level observed over the three previous years (447 tonnes).
As pointed out in the INTA 2016/2017 report, the sauces sector is the only one to report an active balance, which has been growing regularly since 2004. Last year, foreign sales of Argentinian sauces (Paraguay, Uruguay, Bolivia, Chile, etc.) absorbed slightly more than 1 000 tonnes of products for a turnover of USD 1.06 million.

A presentation of a number of other key points of the Argentinian industry can be found, along with relevant comments, in the complete INTA report on 2016/2017 activities:
https://inta.gob.ar/documentos/asociacion-tomate-2000-programa-de-competitividad-de-la-industria-de-tomate-informe-de-progresos-2016-2017 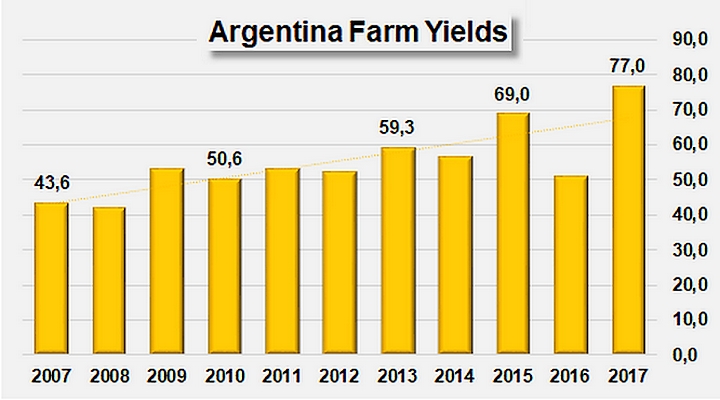 Distribution of Argentinian production, region by region, since 2008

Compared progression of production and demand in Argentina since 2007 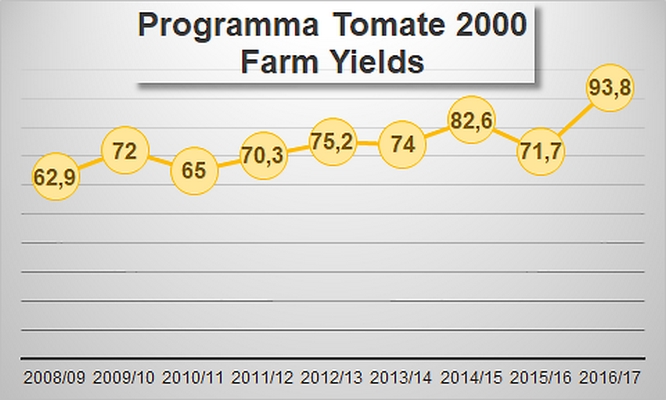 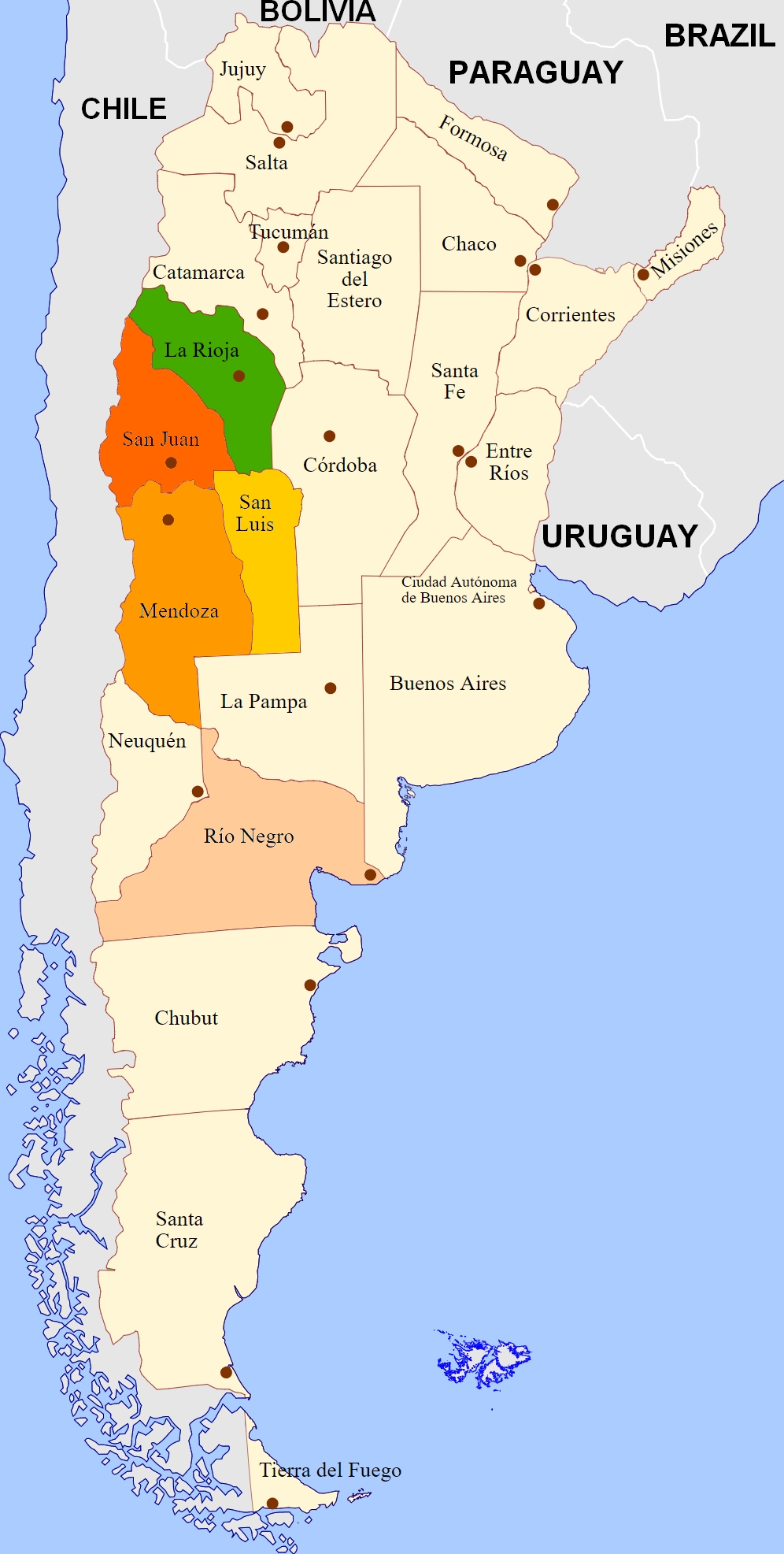