Argentina: a new factory built by the state

28/07/2017 - François-Xavier Branthôme - Lire en français
The regional press in Argentina recently announced that the Government of the San Juan province is intending to invest more than USD 150 million in the construction of a tomato processing plant.
This decision by the authorities has certainly been facilitated by the fact that the San Juan region has recorded the best agricultural yields for processing tomatoes over the past ten years, that it ranks second at the national level in terms of surfaces dedicated to this crop and that its main growers have committed themselves to sustainable efforts in the area of new cultivation techniques – notably by using drip irrigation systems and machine harvesters. The government wants to promote the industrialization of the sector and intends to finance the construction of a factory in the "9th of July Industrial Park", in San Juan, which will be equipped with several processing lines in order to develop the value of this raw material. 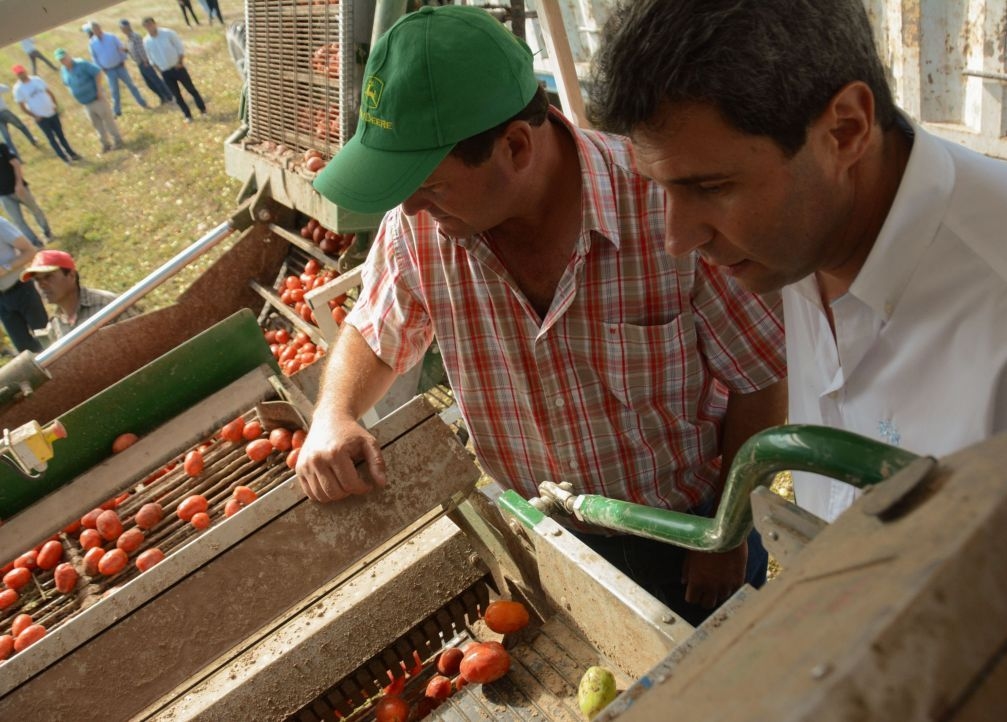 Presentation of two Italian harvesting machines bought by producers.
The plant will be able to produce both pastes and diced tomatoes in drums, intended mainly for the industrial sector. But it will also manufacture pureed tomato in Tetra Packs, as well as diced tomatoes and sauces conditioned in "doypack" plastic pouches that can be distributed directly under private labels on the shelves of the large retail chain supermarkets.
The new plant will be entrusted to growers in the context of a concession agreement, with about forty growers banding together to form a cooperative in order to manage the plant themselves.
Very strong demand
The objective of this investment is to increase the production of tomato pastes, in order to better meet the national demand for this product, which amounts to close on 600 000 tonnes per year. Argentina's own production only amounts to about 200 000 tonnes per year. The province of San Juan also wants to consolidate the long-term presence of processing operations on its territory. "Although processing tomatoes are grown in the province, the crop is not big enough because part of the production (about 1 000 hectares out of a total of 1 800) is redirected towards other provinces," notably towards the Mendoza province, explained the Minister of Production Andrés Díaz Cano.
The factory is expected to increase its capacity once the installation has been entirely completed, and it will then be able to process the crop grown on about 870 hectares, amounting to 87 000 tonnes, which represents half of the volume produced last year. The state factory should also be able to match the size of the giant installation of La Campagnola, which is currently the biggest processing plant of the San Juan region. That said, professional sources estimate that with the development of planted surfaces expected over the coming years, this industrial capacity will remain insufficient. In fact, according to official sources, the La Campagnola company, which is controlled by the Arcor group, is attempting to extend surfaces in order to increase its own production from 70 000 tonnes to 140 000 tonnes over the next few years.
The provincial government intends to turn this cutting edge factory into a tool for the growers Cooperative that has been selected to support the project. Although the maximum technical capacity remains defined, industrial activity will depend at first on the initial working capital and the quantities of raw materials that growers are able to provide. Cooperative participants will also decide on the best moment to increase these quantities. The Minister of Production hopes that the plant will be operational in time for the next harvest, which will reach its peak between January and April 2018.
Some complementary data
- Last year, 405 000 tonnes of processing tomatoes were harvested in Argentina, on a planted surface of 7 904 hectares. Average yield reached 51.2 tonnes per hectare.
- In the province of San Juan, the average agricultural yields amounted to 105 metric tonnes per hectare, compared with 95.9 mT/ha in 2015. In the Mendoza province, yields were closer to 66 mT/ha in 2015.
- 45% of the fields planted with processing tomatoes are harvested by machine. 35% of growers harvest with their own machines, while the remaining two thirds, approximately, use rented machines.
- In 2017, the season's results (488 000 mT) exceeded initial objectives (470 000 mT), for an estimated consumption of 650 000 mT. In order to satisfy demand, operators must import volumes of tomato paste.