12/06/2018 - François-Xavier Branthôme - Architecture of Trade - Read in French
The slowdown of worldwide trade
In 1997/98, the 9.68 million tonnes (farm weight equivalent) absorbed by the worldwide trade of tomato products accounted for 42% of the quantities processed that year. Over the most recent marketing year (2016/2017), more than 25.5 million tonnes of products were traded internationally, which amounts to two thirds of the volumes of raw materials processed over the harvest season. 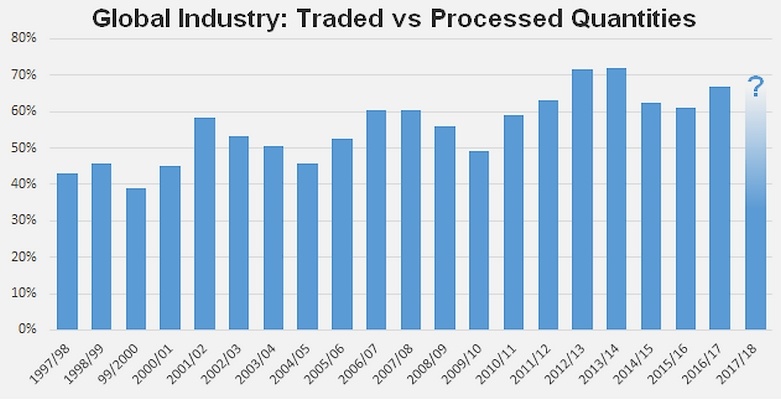 Over the past 20 years, the volumes of products exported by processing countries as a whole have been multiplied by 2.5. This intensification of trade, driven by increasing demand and increasing dependency of consumption regions, has not come about in a geographically homogenous way, neither is it uniform in terms of product categories, nor regular over time. The 2011/2012 marketing year represented an inflection points in the dynamics of international trade development. Whilst remaining positive, growth has significantly slowed, leading to a new worldwide commercial context that features sluggish progress and where competition is increasingly aggravated between operators who can no longer count on the regular expansion of demand and are unlikely to be able to acquire significant new market shares other than by claiming those that are already held by competitors.

Among the three main product categories, exports of sauces seem to have done better than other categories at resisting the slowdown in dynamics. In 2016/2017, worldwide exports of sauces shifted 1.35 million tonnes of finished products, or the processed equivalent of close on 3.9 million tonnes of raw tomato.
Canned tomato exports not only progressed at a slower rate but also shifted far smaller quantities than the other two categories. Over the most recent marketing year (2016/2017), the global trade in canned tomatoes shifted 1.64 million tonnes of finished products, or approximately 2.1 million mT of raw tomato.
The paste category is the one that has suffered most from the crisis affecting the international trade in tomato products over the past five or six years. Over the very difficult seasons that followed the excessive production of 2009, the fast pace of growth in trade that the industry had known previously progressively gave way to slower and slower annual progression. Last year, the volumes of paste shipped between countries around the world amounted to 3.205 million mT of finished products.