13/12/2018 - Press release , François-Xavier Branthôme - Lire en français
Added value for products and for the industry: analysis of the industrial costs of tomato products

Improvements in product quality and the ethics of trade relations were the main topics of a recent assembly of the ANICAV, the Italian biggest association representing tomato processing companies, which was held on 30 November in the context of the sixth edition of the "Filo Rosso del Pomodoro".
For careful observers of this annual event entirely dedicated to the tomato processing industry, it was clear that the future of this sector – and of the cultivation of this raw material in Italy – depends on the capacity of the industry to remain united and coherent – from agricultural growers right through to large chain retail distributors and including industrial operators – whilst remaining focused on one single goal: managing to defend more profitable prices for finished products, at a time when industrial costs appear to be both very high and almost impossible to reduce. 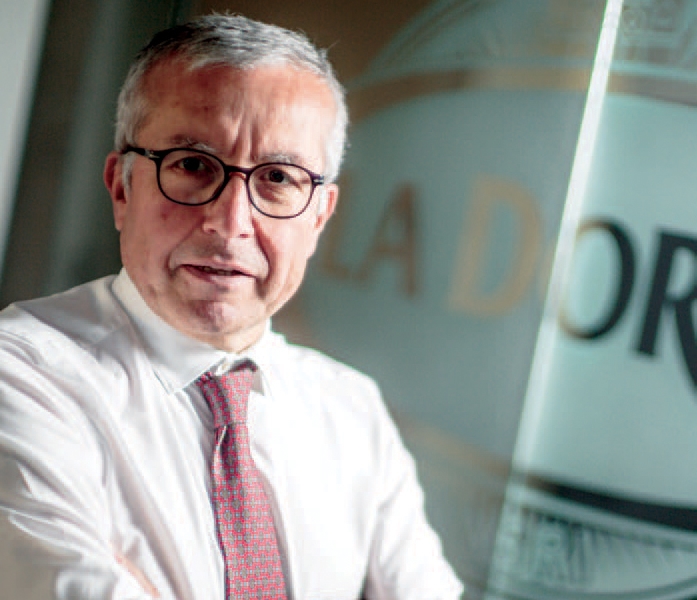 "More value for products and for the industry, this was the topic chosen as the main thread of the event," stated Antonio Ferraioli, president of the ANICAV. "This is a subject of primary importance and is particularly topical, as shown by the discussions that have been stirring up our sector, particularly in recent months, concerning the issue of unfair trading practices and the need to promote better ethics in the area of commercial relations in order to encourage greater collaboration between the private sector and large retailers."
The ANICAV President was talking about the controversy that erupted last summer around electronic reverse auctions, which have allowed buyers operating in the discount sector of large-scale retail distribution to acquire a number of food products, including canned tomato products, "which have ended up being sold at ridiculously low prices". He insisted on the major negative effects of these practices on the long term survival of processing companies, at a time when tomato growers are hoping to see an increase in the price paid for tomatoes next season.

The ANICAV has committed itself to putting an end to this pattern of dangerously low prices for industrial tomato products. "In order to acknowledge a 'fair value' for our products," declared Giovanni De Angelis, General Director of the ANICAV, "our Association has decided to work on a definition of the industrial cost of the most frequently sold items. In addition to this cost, consideration must be taken of 'general expenses' – which can vary from one company to another but always have a significant impact – and, of course, of 'fair' profit margins, in order to establish what can represent for consumers a reference price that guarantees the quality of the product as well as its ethical and environmental sustainability."

The high point of the day was the presentation of the study "Analysis of industrial costs in the canned tomato sector", which was commissioned by the ANICAV and carried out by the Department of Economy of the Campania Luigi Vanvitelli University under the supervision of professors Francesco Gangi and Eugenio D'Angelo. The objective of this study was to develop a model of analysis for the cost of industrial production of a number of the main product references manufactured by processing companies: peeled tomatoes, pulped chopped tomato and purées (passata). 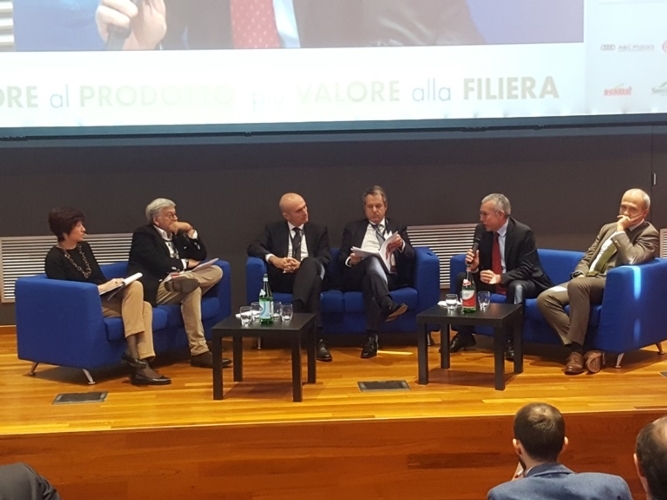 Roundtable participants, from left to right: Pugliese (Conad), Rosetti (Conserve Italia), Santambrogio (ADM), Ferraioli (Anicav) and Mutti (Centromarca)
The study was debated during a roundtable session in which various operators took part: Antonio Ferraioli, President of the ANICAV, Francesco Mutti, president of Centromarca, Francesco Pugliese, from Conad, Pier Paolo Rosetti, General Director of Conserve Italia, and Giorgio Santambrogio, President of the Associazione della Distribuzione Moderna.
"The results of this study, far from being intended as a contractual instrument, stated Antonio Ferraioli, should represent the basis from which to start a dialogue with the world of retail distribution, aimed at asserting the quality and the typicality of the Italian tomato industry and at opening a new scenario for the sector in order to promote tomato products, in the field of trade, from the status of low-cost commodities to that of a quality product that is sustainable from the environmental, social and ethical points of view. In fact, we believe that the interests of consumers cannot be and should not be defended simply on the basis of lower prices: it is also necessary to comply with ethical principles in the workplace and in trade relations, whilst maintaining the quality of our products." 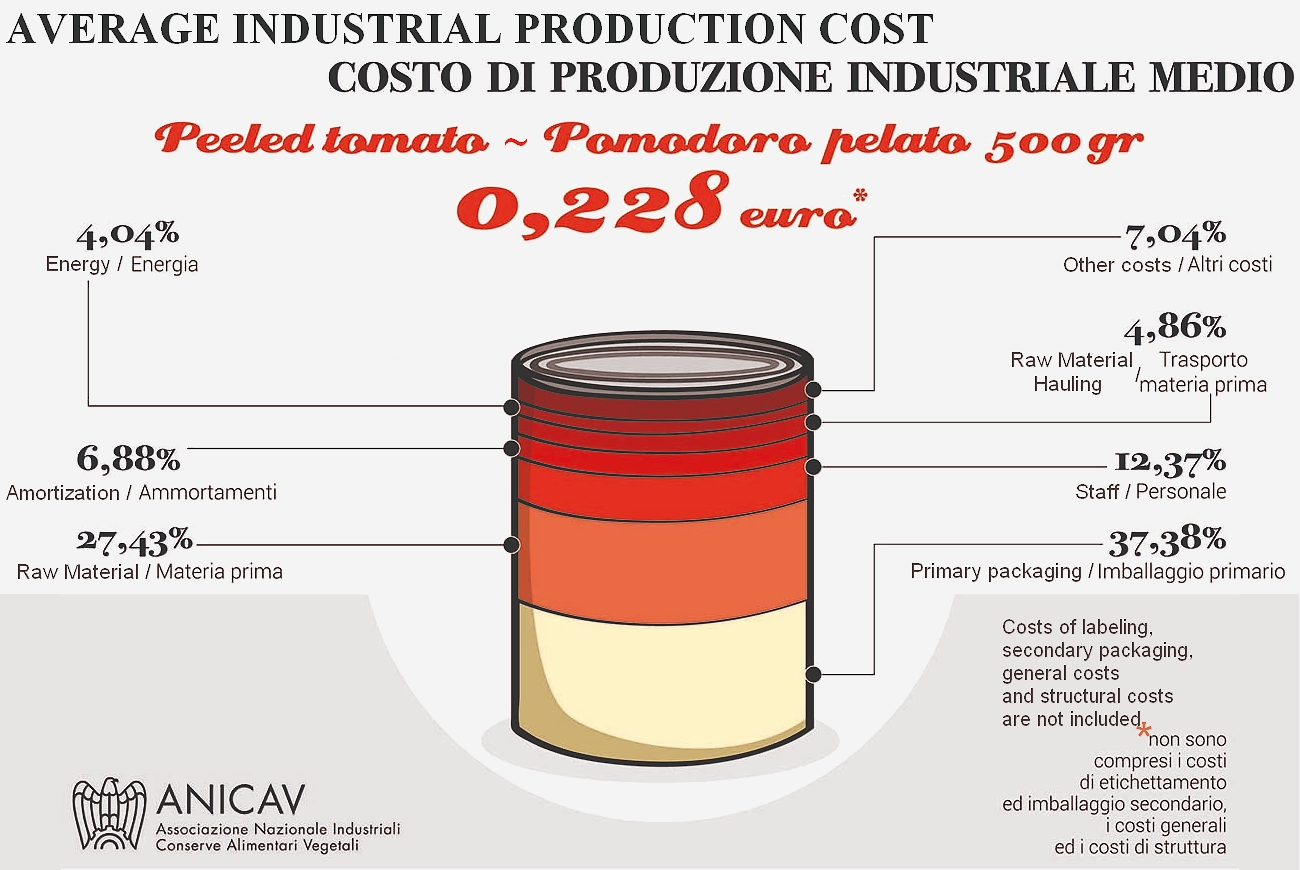 The study was able to determine not just an estimate of the unit value for producing the items that were analyzed (unit cost per can/jar), but also the incidence of the different components of direct costs (by limiting the analysis to production factors that contribute to making up the primary profit margin, which are: raw materials, the primary packaging, energy, transport of the raw materials, labor, depreciation, etc.). As for primary packaging (in immediate contact with the product), and more specifically conditioning formats aimed at retail sales, the study authors established and used an average value for the different types of packaging available (easy opening / total opening, varnished / uncoated, etc.). 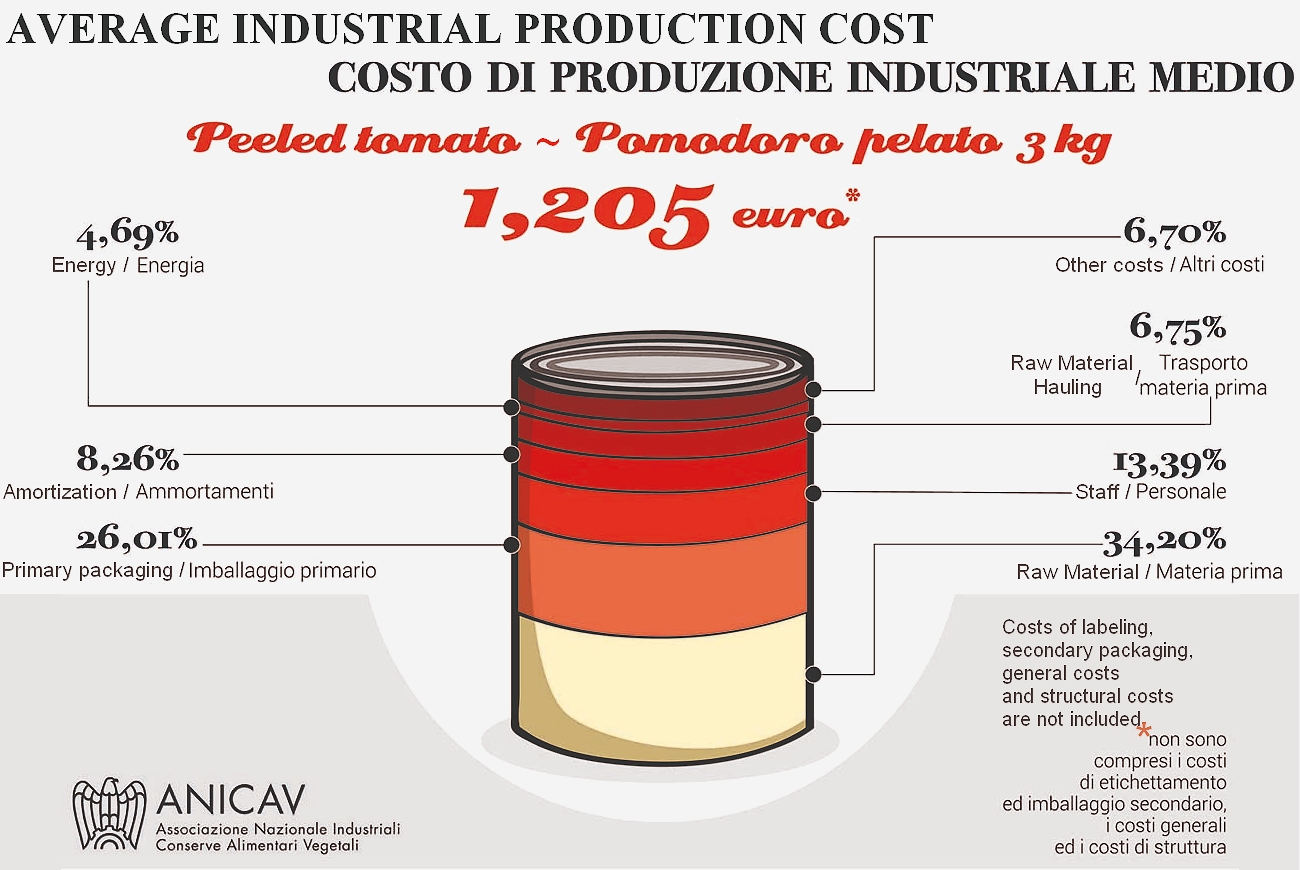 The workgroup analyzed about 900 observations (for the three-year period running 2014-2016), which were provided by companies taking part in the project and who anonymously uploaded data to a dedicated online platform. 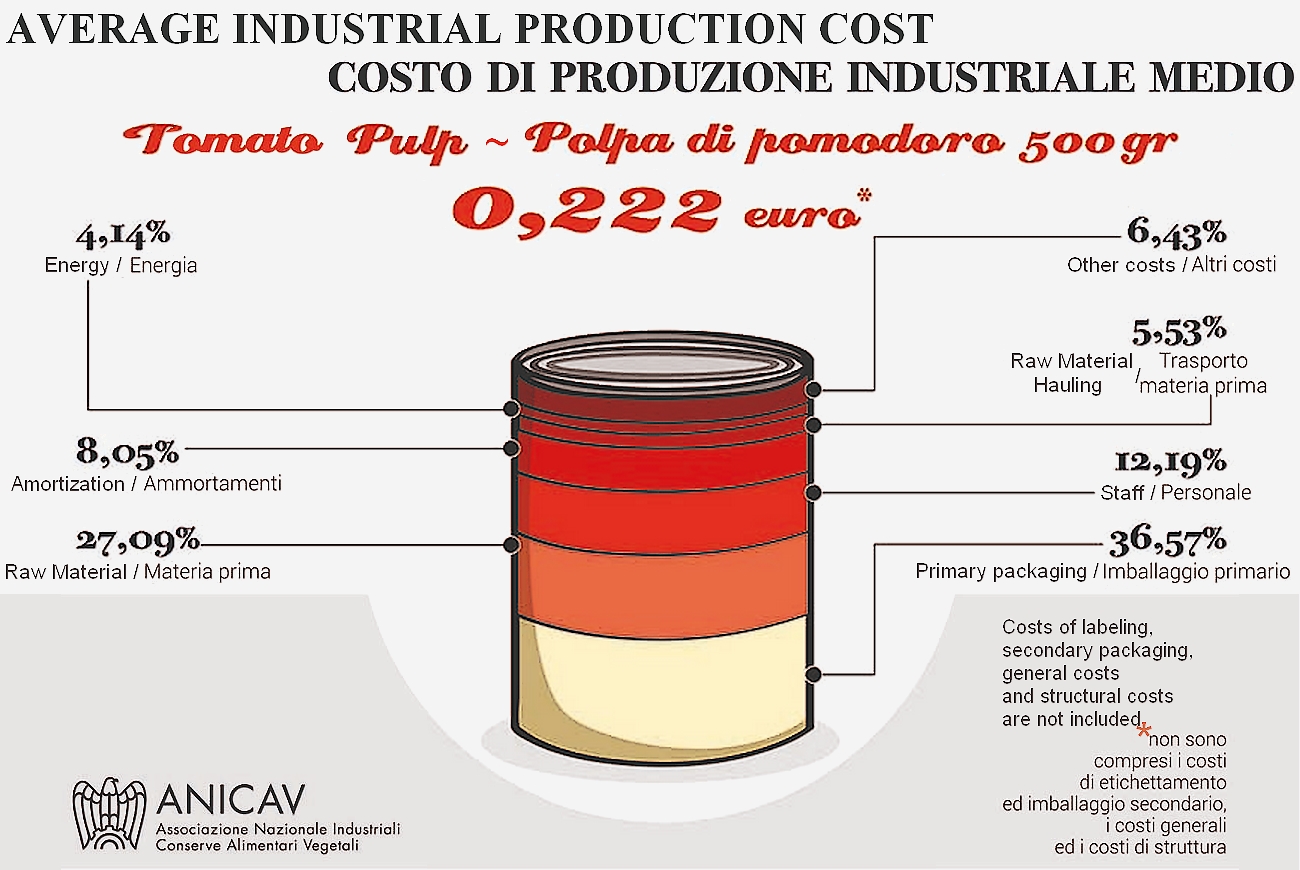 The results of the survey showed that the average cost for the industrial production of a 500 g can of peeled tomatoes amounted to EUR 0.228. The production cost of a 3 kg can of peeled tomatoes was evaluated at EUR 1.205. For a 500 g can of chopped pulped tomato, the average cost amounted to EUR 0.222. Finally, researchers established that the cost of industrially producing a 700 g bottle of purée (passata) averaged EUR 0.384. 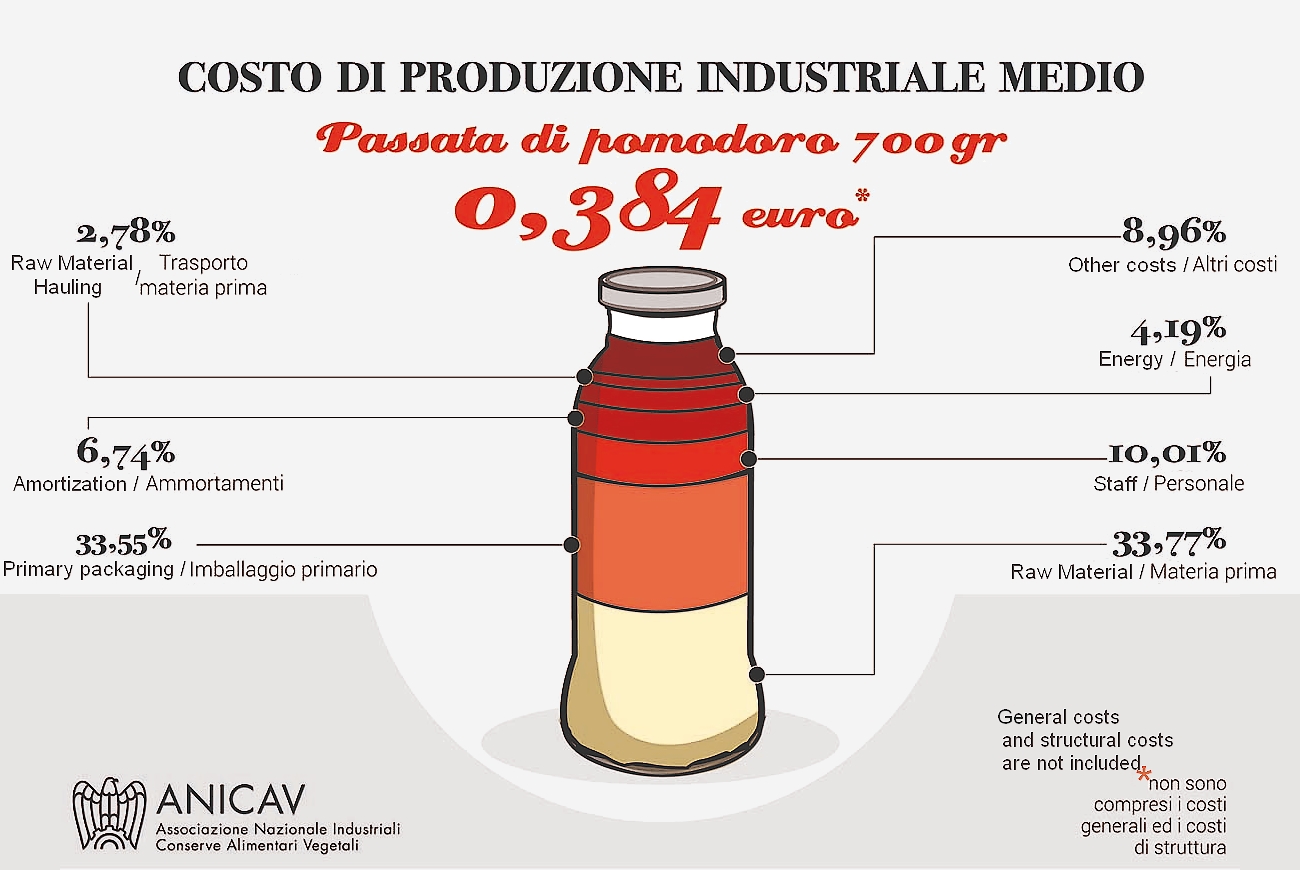 In order to get a more complete overview, in addition to these industrial costs, it was necessary to also take account of labeling and secondary packaging costs for canned products, as well as of general costs and structural costs – administration, insurance, marketing, etc. – whose impact on the value of production was estimated at an average of between 6.2% and 6.5%, according to the authors of the study.

These results were completed by a detailed analysis of the outcome for indices and margins – for a wider sample of companies than the sample used for the production cost analysis, but which is a homogenous sample in terms of industrial production. This prolongation to the study also allowed researchers to carry out an in-depth analysis from the economic and financial points of view.
Thanks to these analyses, it appears that dealing with sales prices is currently in a particularly critical phase as operators try to bridge the gap between the constraints linked to complying with quality standards imposed on finished products, preserving the necessary conditions for the economic and financial equilibrium of the companies and the demand for profitability from invested capital. Indeed, along with the difficulties encountered by agricultural production (weather conditions, plant health issues, increasing costs, etc.), increasingly worrying complaints are beginning to be heard from the industrial sector. According to a recent study carried out by Nomisma regarding the results of the tomato processing industry over the three-year period running 2014-2016, which also indicates an overall increase of 8% of the turnover and 12% of the added value, the industry has recorded a 3.4% drop in net profit margins, paralleled by a drop in the profitability of equity, which has decreased from 3.9% in 2014 to only 2.2% in 2016. According to experts, this dynamic is linked to the regular drop in sales prices aggravated by the incompressibility of costs.