20/07/2019 - François-Xavier Branthôme - 2019 Season - Lire en français
Portugal
The weather remains unstable with temperatures fluctuating a lot, from very hot one day to cool another. The harvest will start during the last week of July on some sandy soils but there not be any large volumes processed until the second or third of August. No change to the overall forecast (1.263 million tonnes).

Spain
The harvest started on 8 July in Andalucia but slowly as the cool weather in June and July has slowed maturity and there are many green tomatoes. Full capacity should be reached this week.
In Extremadura, the crop looks good and the harvest should start next week, on 22-23 July, but mostly in the last few days of July. In the Ebro valley, major floods of the Cidacos River and storms with hail have completely destroyed about 60 hectares and damaged about 100 hectares.
Only about 60,000 tonnes have been delivered to date out of the total volume which remains estimated at 3 million tonnes.

Tunisia
Until July 14, 250,000 tonnes were transformed, which is about 25% of the total harvest. The harvest is almost complete in the Kairouan region (60%), but it has just started in the other regions (from 10% to 25%) with a daily supply of around 20,000 tonnes of fresh tomato to the 24 factories operating this year. The forecast remains 880,000 tonnes. 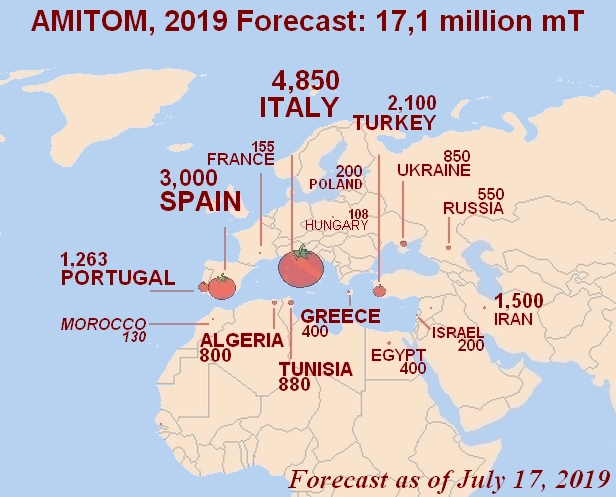 Italy
North: During the last two weeks thunderstorms have affected bout 100 hectares in the Piacenza area with damages estimated at -30 to -50% yield. After a very hot weather in the second half of June, temperatures are now normal with some rains and storms. The crop will be late compared with last year and will start during the last week of July or the first week in August, with lower yields expected for the first part of the harvest. Later fields look good at present but it is too early to estimate the yield. The total volume expected is reduced to 2.45 million tonnes.
Centre & South: The situation is similar to the north with also some localized damages of fields due to storms and hail last week. The harvest will start with a delay of about a week with low initial yields due to the rains in May. As planting continued until the end of June, two weeks later than normal, the harvest will continue into October, with the risk associated with a late crop. The satellite survey confirmed a 9% increase of the total surface planted this year with more than
28,000 hectares which should bring a total volume of 2.4 million tonnes in the region.
Overall, the forecast for Italy is reduced to 4.85 million tonnes, but with a wide margin of error as yields are uncertain.

Hungary
The extreme storms have avoided the tomato fields until now. Weather is normal nowadays without too high temperature (not higher than 30°C). Pathogens are manageable as well, so there isn't any reason to modify the previous yield forecast.

Greece
The weather was very warm until two weeks ago and now back to usual levels. Last week about 50 hectares were hit by hail in the centre with expected yield losses of between 50% and 100%. So far, the crop is looking very good with expected higher yields but there is currently a weather front with heavy rains, with uncertain consequence so the forecast is maintained at 400,000 tonnes.

Egypt
The situation is good. Harvesting of the summer crop start about one month ago. Weather has been good with no heatwave or rain and pest pressure is low. The quality of the crop is very good and the quantity good.

Turkey
The harvest will start on 22-23 July in the south. The weather is mild with some rains but it is difficult to predict field yield until the start. Overall, the crop looks good and the forecast is now raised from 1.9 to 2.1 million tonnes. The increase will however mostly enable processors to replenish their stocks to cover the domestic market after the low 2018 production, and export cans to Iraq and Syria and should not affect the export market. Moreover, the spot price may be lower than contract prices. The lira is strengthening and contributing to making Turkey uncompetitive on the international market.

Ukraine
June summer showers and hails continued in July. Heavy rains with temperature split caused the development of bacteriosis and fusarium in some territories. Despite the aforementioned weather conditions and diseases, tomato development remains stable as well as the final volume forecast. Harvest should start on the first week of August.

Russia
The weather conditions were good in June - early July. Due to delay in planting the harvest should only start on 9-12 August. It is expected that only 30-35% of the volume will be harvested in August (instead of normal volume 50%). The forecast remains 550,000 tonnes but the total volume will depend on the weather condition in September and October. 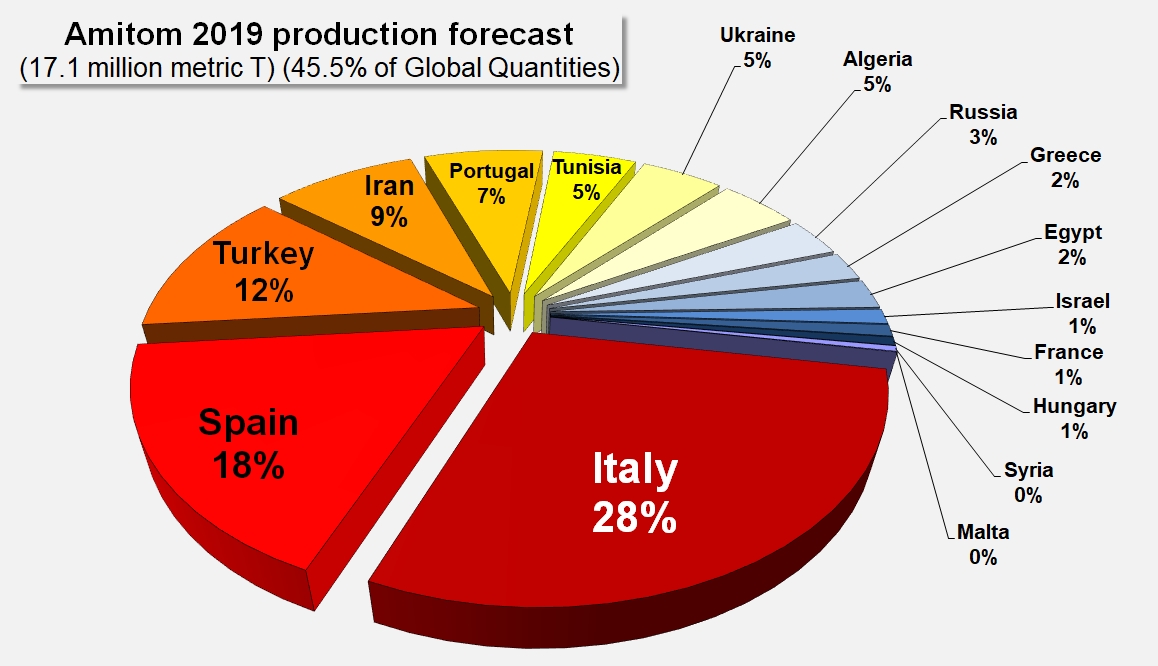