29/06/2019 - Sophie Colvine , François-Xavier Branthôme - 2019 Season - Read in French
The latest global production estimate before the beginning of the harvest in the Northern hemisphere is 37.5 million metric tonnes at the most as volume in California remains uncertain Portugal Planting was done more or less on schedule except for a two week gaps in the middle and it finished in the first week of June. Temperatures are a bit cooler than usual and up and down and it is currently cloudy with 24°C. Temperatures are due to increase to 27-30°C at the end of the week which is a normal range and the heatwave will not hit Portugal. Harvest should start during the last week of July or early August and the forecast remains unchanged (1,26 million mT). Spain The final surface planted was 250 hectares lower than the initial estimate at 33,500 ha. So far, conditions have been good for the crop development with mild temperatures and no incident reported. A heatwave is expected this week mainly in the north (Navarra). It may affect flowering in Extremadura but it is too early to tell. Harvest should start on 8-10 July in Andalucía and round 25 July in Extremadura. The forecast is confirmed at 3 million tonnes.  France Weather conditions have finally become "normal" since Ascension (May 30) and we are now entering a heatwave. The plantations have been completed since mid- June. In the earliest fields, harsh conditions delayed and blocked vegetation for a time. In the end, only small surfaces will suffer from this, as in all the others vegetative growth restarted. We cannot yet assess the potential yield losses of the whole because the climate has been really conducive to the development of all crops over the last two to three weeks. There is also nothing to report at the moment with regard to pests. Only weeds can sometimes be difficult to control. Only 6 hectares were destroyed by hail 10 days ago in the Drôme area (north of the south-east region). A priori, the first tomatoes harvested would be in the Southeast in a month to the day or even a little earlier if true summer conditions like this week take hold. We keep for the moment the estimate given at the Avignon Conference (155,000 tonnes). Italy North The spring here has been very unusual with a lot of rain, hails in some areas and temperatures below seasonal averages, particularly during the month of May. Starting from June the situation has changed and we had completely different weather conditions with sun and temperature above average particularly in the last two weeks. It is still too early to estimate the effects of these unseasonal weather conditions on the crops and we will be returning to this topic with more precise evaluations in the coming weeks but what we can say is that there will be a delay of about one week for the start of the harvest. In June we had about 30% of the total surface planted while in a standard year it is about 10-15% max. This will bring a very late crop (end of September early October) with all the uncertainty on the results for that period of time. The estimated output for the crop remain unchanged at 2.5 million tonnes but it is likely to be reduced to 2.45 if the yield on the early crop will be lower than a normal year as it seems to be at this moment, Next July 3rd we have meeting with POs and we will have more detailed information on damaged hectares, crop delay, yield estimation for early crop. Italy South & Centre The weather in May has been very rainy which has affected the transplanting operations which were often interrupted. About 30-35% of the surfaces were planted in June, much more than usual. Consequently, the harvest will start a few days later than usual and continue into the end of September/early October. The total surfaces planted are higher than last year (the official figure will be available after the results of the satellite survey are released mid-July) but the average yields should be lower as the first level of flowering was often of lower quality. The forecast for the region therefore remains 2.4 million tonnes. The price was agreed at a “crazy” 95 Euros/mT for round tomatoes and 105 Euros/mT for long tomatoes due to the high price agreed in the North and the weather issues faced by the growers which increased their cost for treatment and had to replant some fields which had been flooded.
The total forecast for Italy remains 4.9 million tonnes. Hungary The planting of the seedlings started a bit later than expected. Till the end of April we didn't have noticeable amount of rain. But between end of April and June we had 200+mm of rain which hindered our planned planting. May was cooler than expected so the growth of the plants were a bit slower than expected. Thanks to the good weather after that period the plants are getting stronger and will be in good shape. We don't expect an early season start. Quantity is expected between 105 and 110 thousand tonnes.  Greece The weather has been good in the south while the centre was hit by some hailstorms which did not cause any significant damage. The harvest should start mid-July in the South and at the end of July in the other regions. The forecast remains 400,000 tonnes. 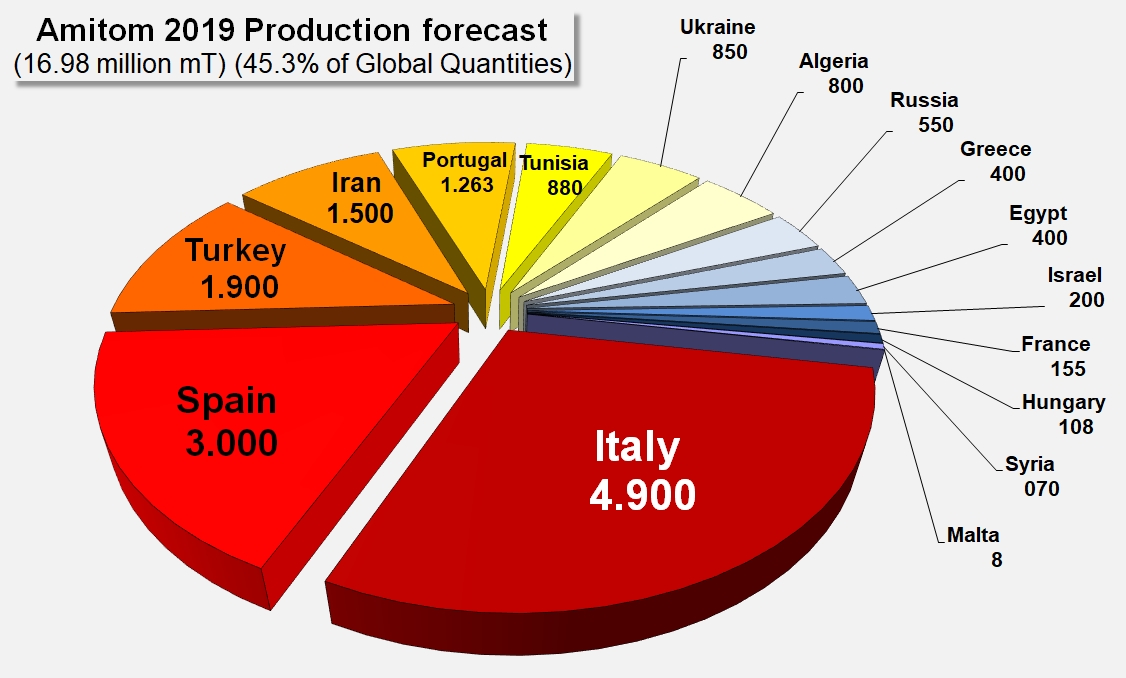 Tunisia The area planted in 2019 is increased with 18,100 hectares against 13,780 hectares in 2018. With an estimated average yield of about 65 t/ha, production is estimated at 1,180,000 tonnes, of which 850,000 tonnes are for the production of tomato concentrate and 30,000 tonnes for the production of canned tomatoes. The production of tomato paste 28/30 is expected to be in the order of 130,000 tonnes and that of canned goods of 22,000 tonnes. The purchase price of tomatoes for the 2019 season is a base price of 170 TND/t ≈ 50 Euros/mT. Until the end of June, the climatic conditions were favourable for the vegetative development of tomato plants and fruits. Harvesting began on 17 June in the central regions (Kairouan and Gafsa) and the processing campaign started during the last week of June at three plants; however, most factories will come into operation in the first week of July. Turkey The plantings down south were much higher than the previous year. The plantings up north also ended up slightly higher than the previous year. So far the weather hasn't been ideal but there haven't been any major drawbacks. The crop is looking fair. We expect that our previous forecast will be a minimum, and are expecting a crop closer to 2 million tonnes. Ukraine May was cooler than usual and rainy. This did not affect the transplanting but caused a week-long delay in the development of “early” tomatoes. Due to the wet conditions tomatoes required additional treatments for crop protection. June is hot with summer showers and hails (no damage reported). So far insect and disease pressure are normal for this stage of crop development. Majority of Ukrainian tomatoes are in good and satisfactory condition. We expect the beginning of the season in early August. The previous forecast of 850,000 tonnes is confirmed. Russia The weather conditions was bad in late April - early May with low temperatures and a lot of rains in all areas (even snow in KBR) that caused 10-15 days delay in planting. Transplanting was not done in the best conditions but delay could be recovered if the weather conditions are good from now on. The total surface planted is around 7,000 ha. There is no change to the forecast which remains 550,000 tonnes but a high proportion of the crop could be harvested in September.

California Harvest will begin for some organic production on June 30th. For conventional production in the southern part of the state processors expect to start around July 6th and the northern part of the state will be closer to the end of the month. The weather for the last 10 days has been normal and based on the forecast will stay the same for the next week. As reported earlier this month, there was about 16,000 acres (c. 6,500 hectares) impacted by a significant hail event in Southern Fresno and Kings County. A small portion of these field have been removed to date. Due to a wetter spring, there was an increase in disease pressure. It is apparent that the overall crop will be smaller than the 12.1 million tons (10.97 million metric tonnes) estimate. Industry will be able to evaluate better once harvest begins in full. Canada Despite a cool and wet spring in Ontario, all contracted tomato acres could be planted by June 20th. Most of the early varieties are progressing well, and crop appears better than expected given planting conditions, perhaps a week or so behind expectations. There is some early evidence of Bacteria Speck & Pythium in a few of the early fields. China Till 24 June, the planted area is 660,000 mu (44,000 hectares or 108,900 acres), and the raw material is estimated to be about 4.3 million metric tonnes. In the early stage, the weather presented low temperature and rainy, but the growth is normal at present, and it is predicted to be rainy in the future. South Africa The season has ended in the summer region and the total tonnage is estimated at 40,000 tonnes, as previously. In the winter region, the season harvesting is now mid-way and there is a presence of infestation (white fly), which will affect total production.  Therefore, the forecast is lowered by another 10,000 tonnes to 90,000 tonnes. Consequently, the total South Africa tomato production is estimated on 130,000 tonnes, down 7.1% from the previous estimate of 140,000 tonnes. USA Midwest The planting season was definitely a challenge as many acres of all crops were left unplanted. The tomato acreage was definitely reduced particularly in Ohio and while we have no specific information on Pennsylvania and east coast, they were similarly affected although we do not know the extent. For the most part, there were no flooding type rains, just consistent rains. The crop size is now estimated at less than 400,000 short tons (360,000 metric tonnes) given more normal conditions the rest of the growing season. What was planted has the potential to make a normal crop.   Some complementary data Global production estimate as of 28 June 2019 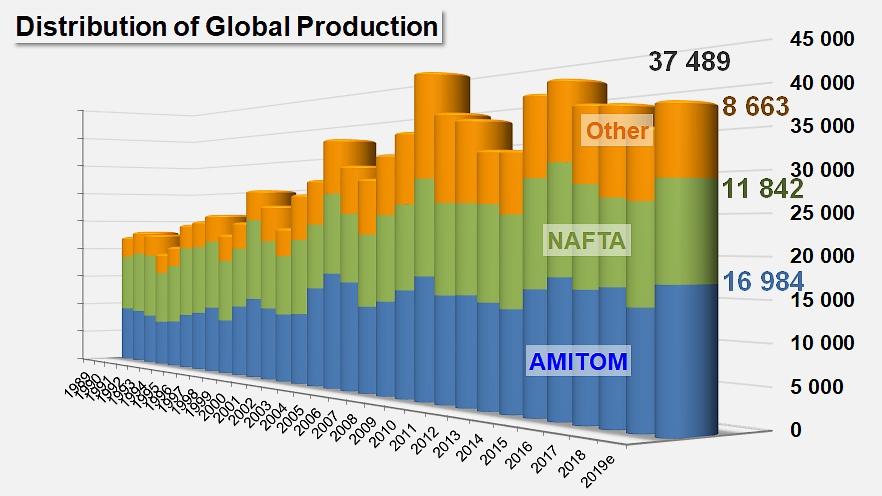 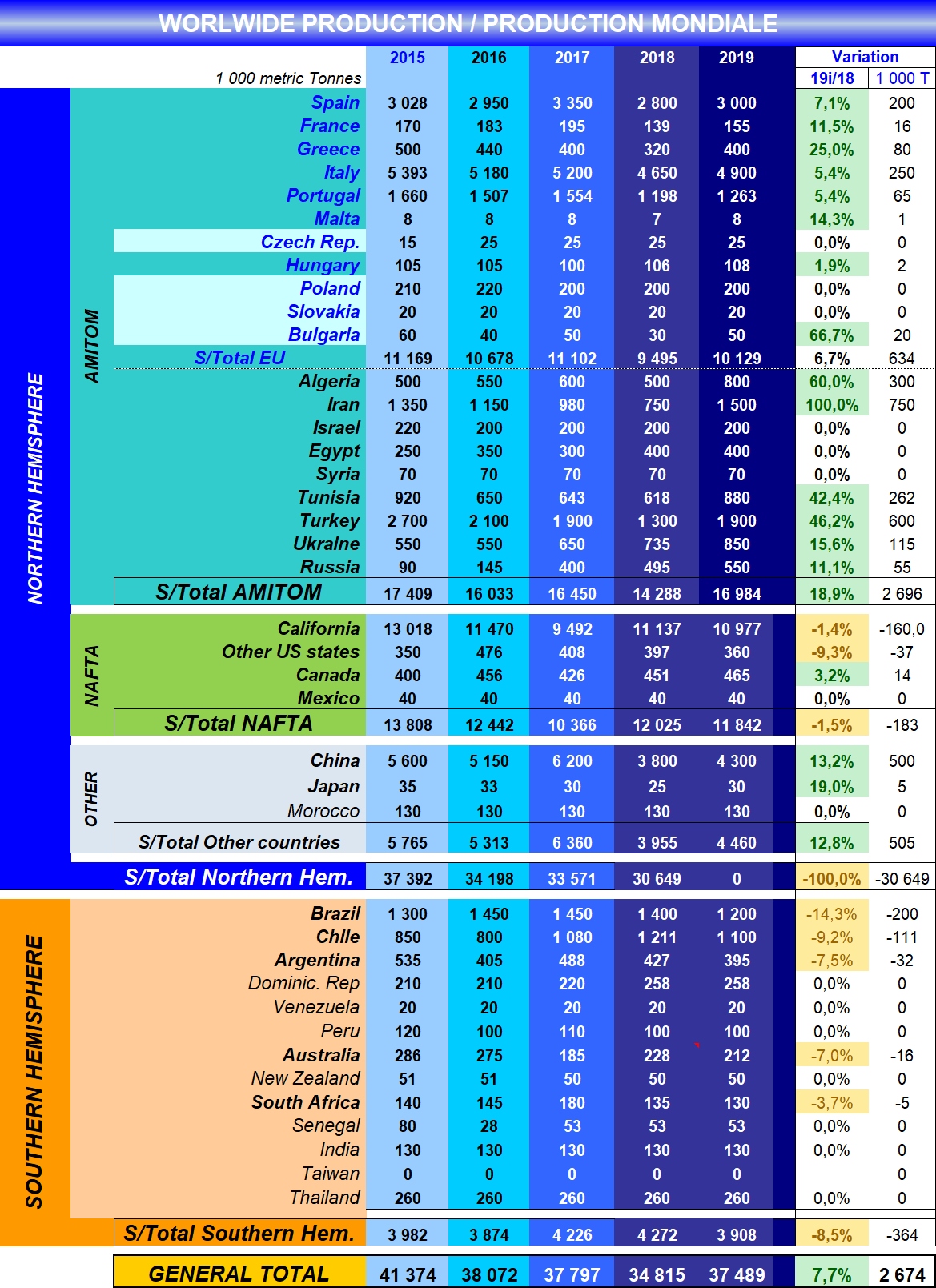 Source: AMITOM, WPTC
Note from the Editor: correction made on 02/07/2019 to the surface planted in China (conversion into acres was wrong)
Related companies