Africa is the second largest continent in terms of surface area and the second most populous in the world, after Asia. With approximately 30.3 million square km (11.7 million square miles), including the nearby islands (Madagascar, Comoros, Cape Verde, Canary Islands, etc.), the African continent covers 6% of the total area of the planet and 20% of its land area. With 1.3 billion people in 2018, it is home to around 16% of the world's population, but has accounted for just under 14% of global consumption on average over the past five years.

The quantities of pastes imported by African countries overall (determined by compiling the export trade declarations of the world’s ten biggest exporters of tomato paste) peaked in 2013, with some 622 000 mT of finished products delivered to the fifty-five countries that make up this continent. After a decade of rapid growth, African purchases of pastes then stagnated until 2016. Since then, foreign supplies to this sector have been declining sharply, with average annual imports of about 540 000 mT over the last three years (2017, 2018 and 2019), a decrease of around 13% compared to the peak period of 2013. 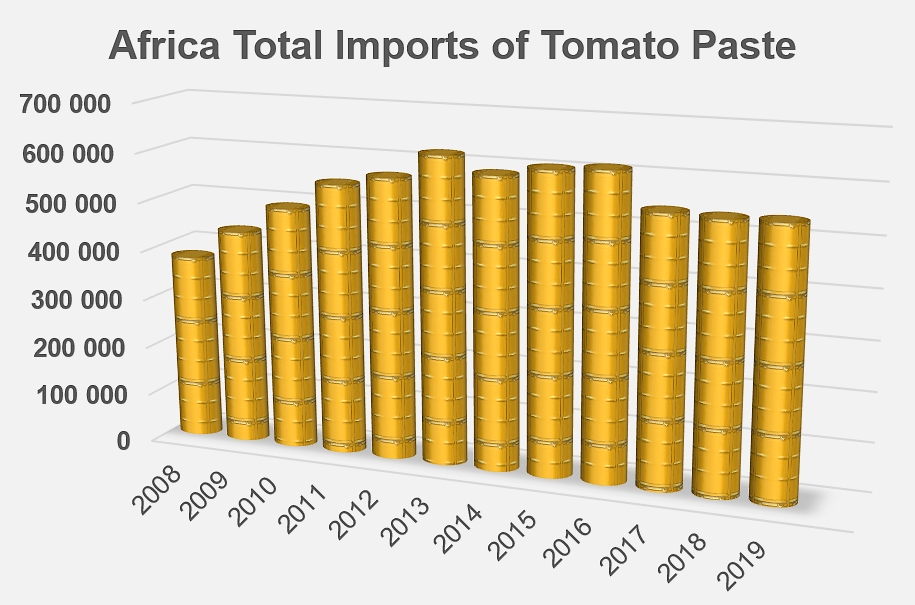 The quantities actually imported into Africa are probably slightly higher than the values presented, which come from a compilation of export data supplied by the world’s ten biggest exporting countries.

About fifteen countries distributed very unevenly across the continent account for the majority (87%) of import flows. Nigeria, whose foreign purchases have decreased significantly since the import ban decreed by the government to help promote national production (from 154 000 mT over the period running 2012-2014 to only 80 000 mT in 2019), remains the main paste-buying country of Africa, with a 14% share of the annual volumes imported to the continent on average over the last five years. Ghana (75 000 mT) and Libya (67 000 mT) respectively absorbed 13% and 12% of the volumes over the same period, while Togo (51 000 mT) and Benin (44 000 mT) accounted for 9% and 8% of total African imports. With Algeria (28 000 mT) and Côte d'Ivoire (27 000 mT), the group of the seven main importing countries accounts for two thirds of Africa’s annual purchases of tomato pastes. Sudan, South Africa, Cameroon, Congo (Dem. Rep.), Angola, Senegal, Sierra Leone and Egypt complete this list of significant importing countries, with average annual purchases over the past five years that have amounted to approximately 495 000 tonnes of finished products. The other forty importing countries of Africa share just over 73 000 mT annually, or about 13% of the total.

Notable contrasts can be observed between the different regional import profiles. West Africa, the main driver of African imports, is responsible for two-thirds of annual incoming shipments, or around 373 000 mT of finished products over the past five years. The dynamics of the region are mainly driven by purchases from countries close to the Gulf of Guinea (Côte d'Ivoire, Ghana, Togo, Benin, Nigeria, Cameroon, etc.). The second most active region is Mediterranean Africa (Libya and Algeria), whose imports over the period reached more than 109 000 mT of products and contributed 19% to total import operations. The quantities involved in operations of the third region (Southern Africa) are only half the size, representing slightly more than 56 000 mT over the period running 2015-2019, with South Africa and Angola being the main players. Import volumes to countries of East Africa (mainly Sudan) have only been half as large, amounting to around 30 000 mT over the past five years. 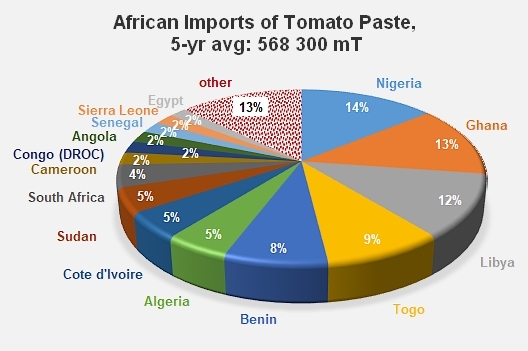 Different regional markets
The great disparity observed between regional levels of demand can also be seen in terms of market progression. The general pattern of African purchases mainly reflects the dynamics of imports into West African countries, with rapid growth until 2013 and then a steady decline that primarily affected shipments from Italy and, to a lesser extent, from the USA, while preserving the domination exerted on the region by products of Chinese origin.
Conversely, Chinese products have virtually been ousted over the past ten years from Mediterranean Africa, the region’s second largest market, first in favor of Italian products and then Spanish ones. However, there are large variations to be observed in annual import levels, with no clear pattern to be found, making it difficult to interpret the results of recent years.
The markets of Southern Africa are less subject to variation, and the slow decline observed across the continent is confirmed in this region, with annual import levels that hesitate between stagnation and decline, within a range of 55 000 to 60 000 mT. Within these volumes, the proportion of Chinese products has not changed since 2013, while the share of Italian exports continues to be eroded by Spanish and Portuguese products.
Although the most modest market of the continent, East Africa is the only one to have shown rapid development in recent years, with an average annual growth rate of more than 6% between 2008 and 2018, even almost reaching 9% between 2008 and 2019. This growth has mainly benefited Chinese and Italian products, and more recently industrial products from Portugal. 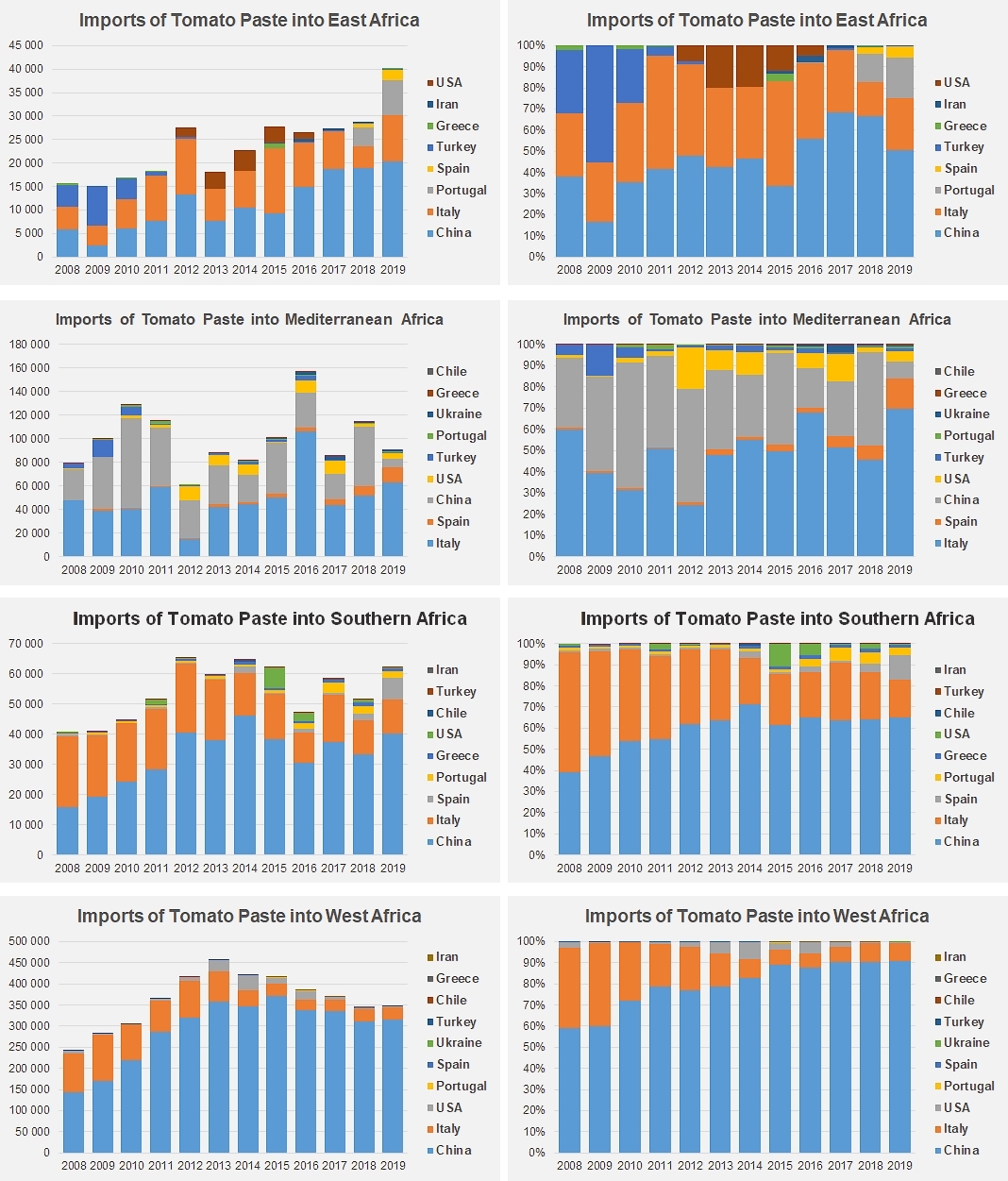 Evolution of imports and contribution of the different origins of products supplied to African markets.
Supplier countries
Being faced with increasingly active competition from European paste and even from US products does not prevent Chinese exports from exerting spectacular domination on the African market as a whole. Over the past five years, almost three quarters of Africa’s annual supplies (about 417 000 mT of finished products) have come from China, the rest being mostly supplied by operators in Europe. It should be noted, however, that a dip can be observed after 2013 and 2015, which for the time being has put a break on the development of Chinese products, as well as on the seemingly inevitable decline of Italian exports, and allowed Spanish and then Portuguese products to acquire some modest shares of this market, which is of primary importance on a global scale.

Value of the market
The African tomato paste market has represented an average annual value of just over USD 456 million over the past three years, down significantly from the spectacular amounts observed in 2013 and 2014, which were closer to USD 700 million.
The largest invoice is paid by the group of countries located in West Africa, with an average of around USD 278 million, ten times higher than the invoice of the East African region (USD 27 million). Between the two, imports of pastes have cost Mediterranean Africa just under USD 94 million on average over the past three years, while Southern Africa has spent about USD 57 million.

Not surprisingly, China and Italy collect the major part (90 to 95%) of the expenditure of African countries for their supplies of tomato pastes. This dominance of the two world leaders is, however, being contested by other processing countries, whose performance has grown slowly in recent years. Thanks to strong increases over the last three years, Spanish and Portuguese exports respectively absorbed up to 4.5% and 2.2% of total African expenditure in 2019.

Finally, it is necessary to consider the African market in the broader context of the performances of each of the ten main paste-exporting countries in order to appreciate its real importance. Over the past three years, sales of paste to African countries have produced 45% of the Chinese industry's foreign turnover, while they have accounted for 16% of Italy's foreign revenue, and more or less 3% of the performances of Portugal, the US, Spain and Greece. 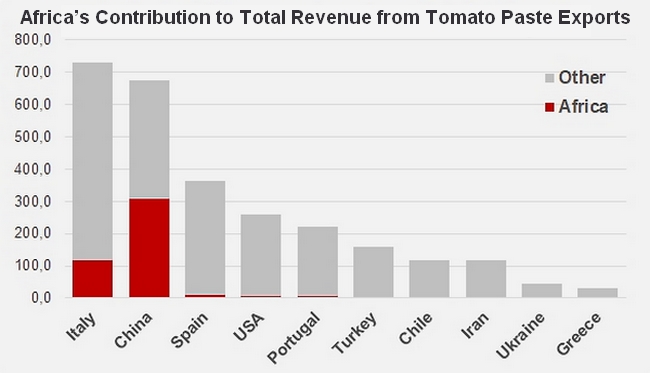 Average imports of tomato paste to African countries, over the past five years. 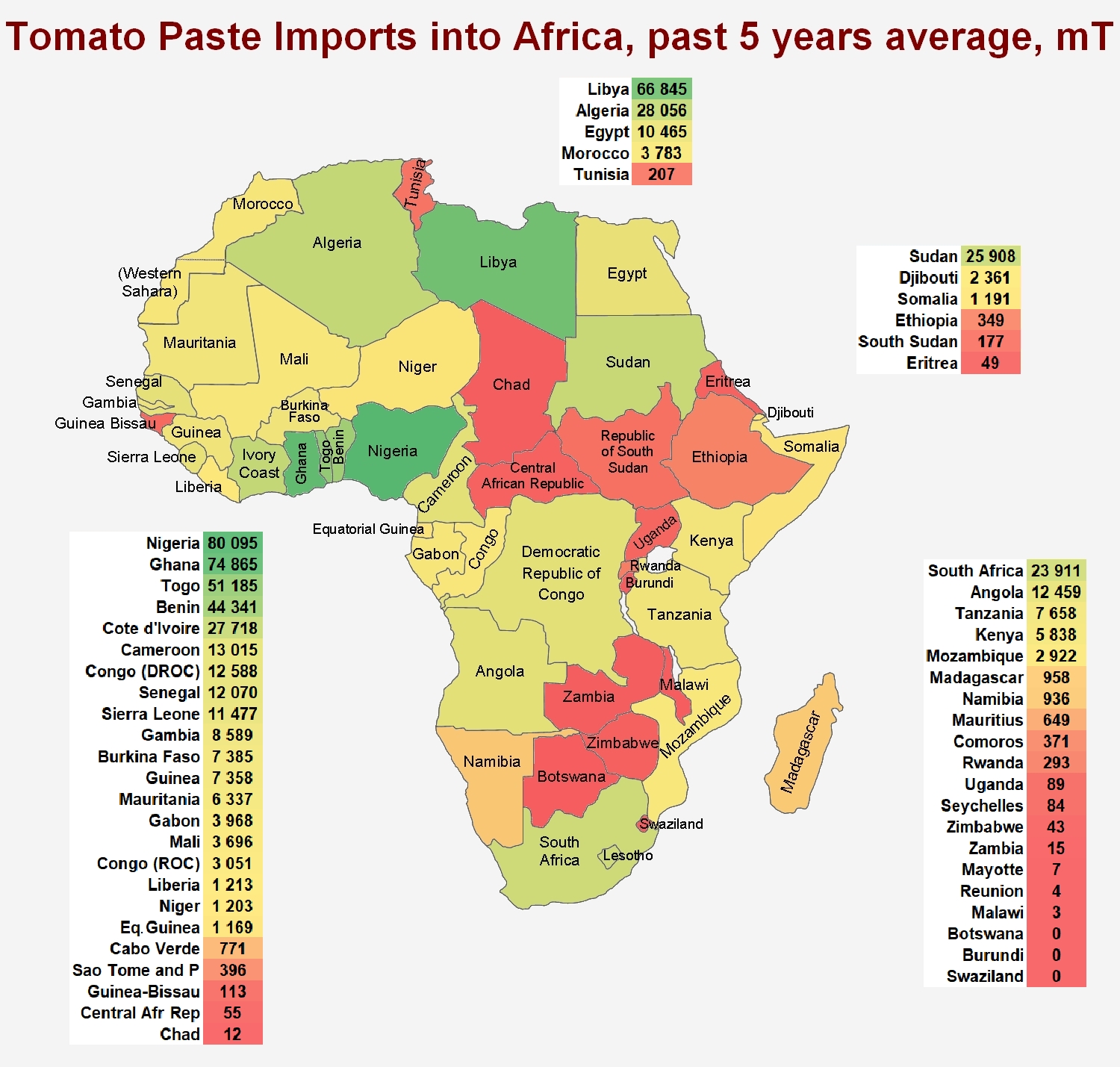 Africa: the difficult match between agriculture and industry