A partial overview of the Turkish industry

08/10/2018 - Sophie Colvine , François-Xavier Branthôme - Lire en français
From notes taken by Sophie Colvine (General Secretary of the AMITOM), during her visit to Turkey in July 2018. 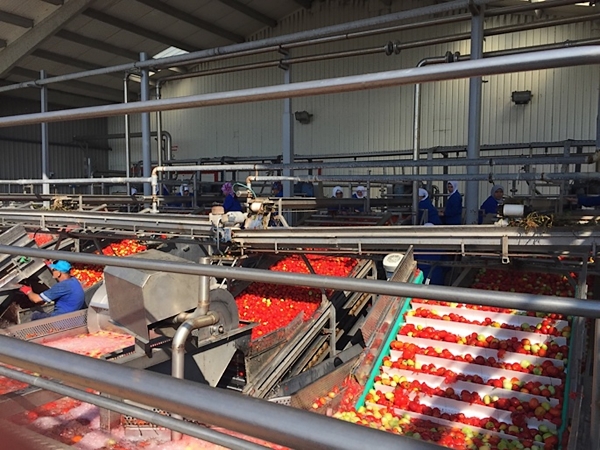 Volumes of tomatoes processed by the Turkish industry can vary considerably from one year to the next: over the past five years, quantities varied between 1.2 and 2.7 million metric tonnes (mT), averaging about 2.1 million mT. For 2018, initial intentions amounted to 1.5 million mT, but the season's results will probably be lower than that, at about 1.3 million mT.
The production and processing of tomatoes is carried out mainly in three regions.
- The region around Karacabey, 60 km west of Bursa, on the southern coast of the Marmara Sea, has 8 000 to 9 000 hectares planted with processing tomatoes, and produces approximately 600 000 tonnes.
- 1 500 to 2 000 hectares are planted in the region of Balikesir, about 100 km further to the south, generally on small family-run farms that do not consider tomatoes as a priority. The harvest in this region starts later in the year (between mid-July and 20-25 August). Factories are having increasing difficulties sourcing their supplies in this region and have tended to stop operating, like the TAT company.
- In the region situated between Manisa and Izmir, along the northern coast of the Aegean Sea, growers harvest approximately 700 000 tonnes of early-season tomatoes. 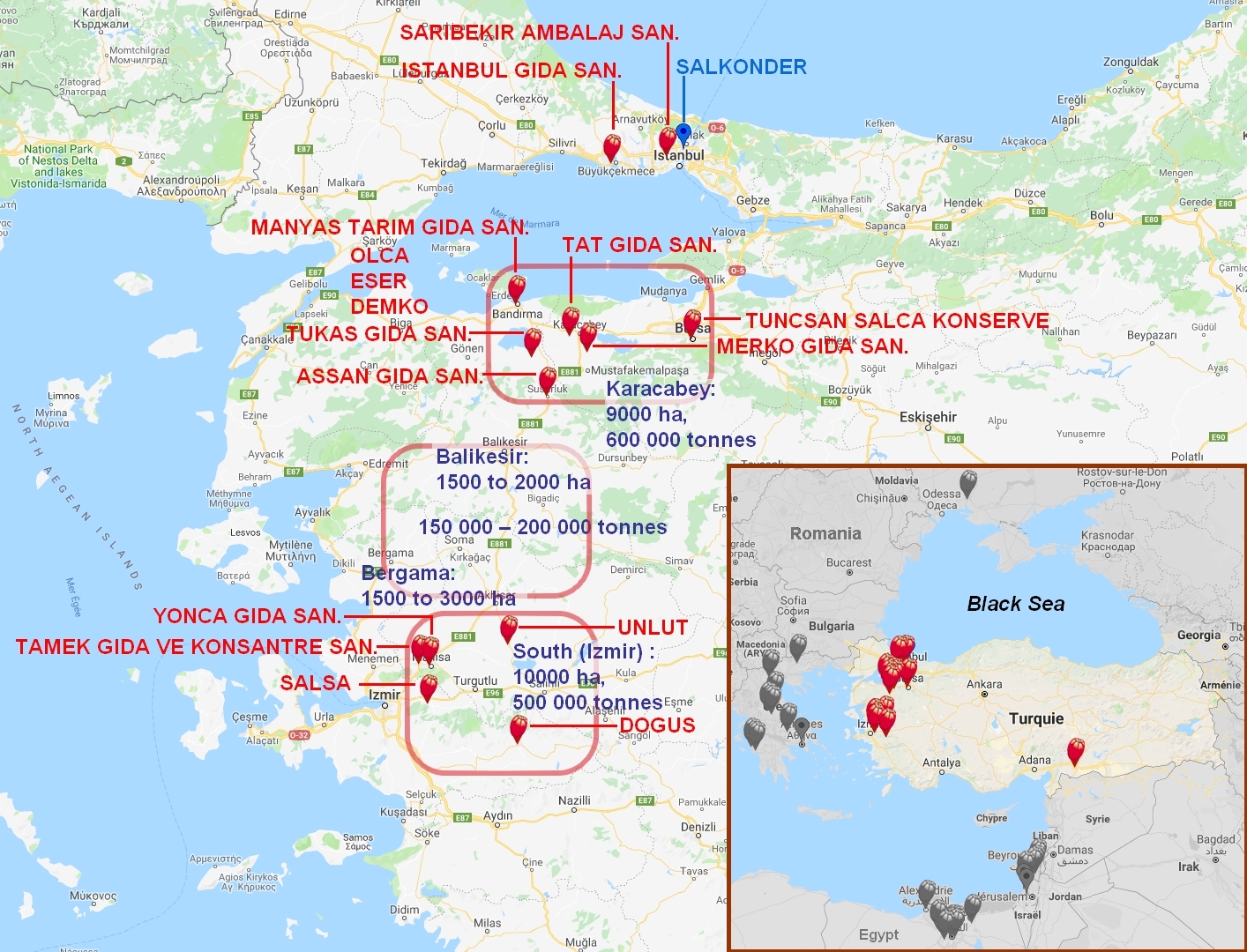 Main production regions and companies mentioned in this article
Most of the time, tomatoes are grown on small farms that plant between 3 and 4 hectares on average, but there are also larger operations that can plant up to 50 hectares of processing tomatoes. Contracts signed at the beginning of the season between processors and growers generally account for 50 to 60% of the production. Seeds or young plants are then supplied by the processor, with more than three quarters of the varieties being hybrids chosen for their high soluble solids contents. Processors also provide technical assistance for growers, as well as fertilizers, financial advances on payments and even pesticides when diseases appear. Young plants are almost all started in plant nurseries.
When tomatoes are not grown under contract, they are generally sold to brokers who distribute the best fruit on the table-tomato market and only sell the remainder to processors.
After winter frosts are no longer a risk, in April, the plants are transplanted in the fields. Most of the fields are equipped with micro-irrigation systems. In the South near Izmir, the harvest season starts very early, around mid-July, while processing plants in the North generally start their season around the beginning of August. The volumes harvested in the South supply local factories, as well as several processing plants in the North that are waiting for the later harvest to start in their own regions. The use of very early varieties has allowed operators to advance the beginning of the harvest as early as the end of July. The season ends mid-October. 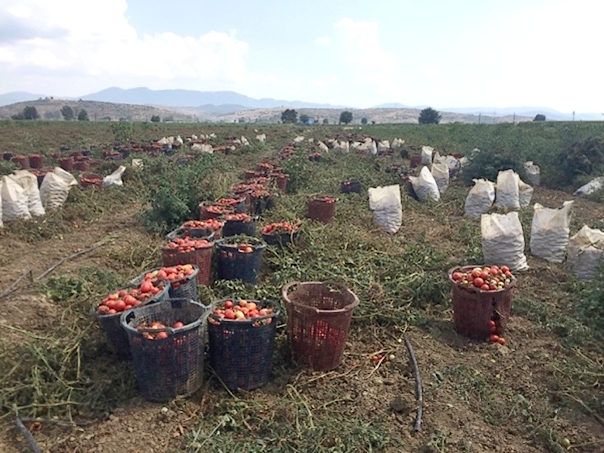 Until recently, the tomato harvest was carried out manually and made use of migrant laborers, often from the same family and mainly of Kurdish origin, moving from camp to camp according to requirements. Over the past five years, the number of harvesting machines has increased rapidly, notably because of difficulties in finding suitable labor. Today, half of the harvest is carried out by machines. It is estimated that between 150 and 200 machines are being used throughout the country, mainly in the North near Bandirma, where very large operators have invested in one or two machines that can be rented out to smaller growers.
Altogether, the country's 62 plants in operation have an impressive processing capacity (80 000 metric tonnes per day, see chart at the end of the article), which means that they can absorb any peaks in production that may occur during the season. Total annual production capacity amounts to approximately 600 000 tonnes of tomato paste. Most factories are equipped with modern high-performance equipment. It is estimated that 300 000 tonnes of dried tomatoes are produced each year (70% sun-dried and 30% oven-dried).
According to a number of observers, the optimal level of production/processing seems to be between 2.20 and 2.25 million tonnes of raw tomato, so as to allow a reasonable management of raw materials and a good balance between exports and domestic demand. When the volumes produced are below that threshold, as was the case in 2018, the price of raw materials increases. Operators try to adapt the value of their products to the domestic markets, but the price increases disqualify their production from the export markets, leading to difficulties for the industry as a whole. The current presence of products manufactured during the 2015 season and still being held in Turkish inventories is a demonstration of these difficulties. 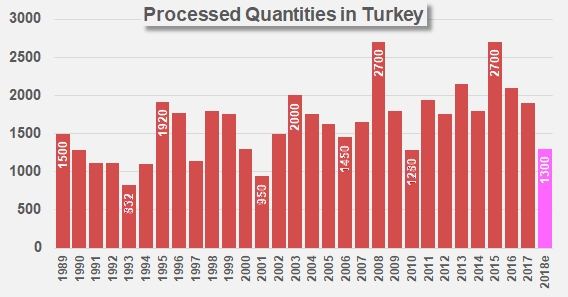 2018: a difficult season
The volumes harvested in the South have been decreased by 20 to 25% due to a drop in planted surfaces and to infestations of Tuta absoluta and the presence of mildew. The quality of tomatoes shipped to factories has been unsatisfactory, with a lot of unripe fruit.
In the North, wide variations in temperature and persistent high humidity levels have affected agricultural yields, and a high number of crop protection measures have been required this year. Factory supplies have also been hit by increasing competition from the table-tomato market, due to production issues encountered in the greenhouses of the region of Antalya. So although contract prices amount to approximately TRY 360 to 400 /mT, the season has been very difficult, with "spot" prices being much higher (TRY 540 /mT or higher) and some growers not complying with contracts. 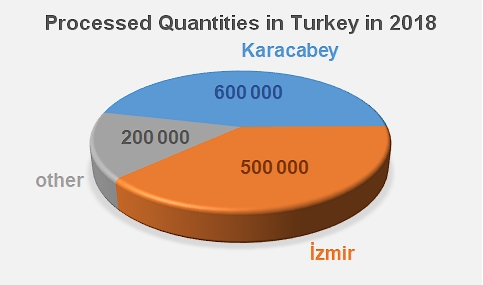 According to local sources, Turkey's production in 2018 comprises approximately 600 000 mT from the region of Karacabey, about 500 000 mT from the region of Izmir and 150 000 to 200 000 mT from other regions.
Turkey also has a big domestic demand for processed products, estimated at the equivalent of 1.4 million mT of raw tomato. This includes 250 000 to 260 000 mT of tomato paste in cans, jars and PET containers, including private labels, without counting sauces and ketchup. It is important to note that the volumes absorbed by the national market are variable, with periods of sharp drops followed by times of expansion, linked to the evolution of stocks involved in the distribution circuits and stocked in the warehouses of wholesalers, and which depend on consumers' buying power and therefore on the economic situation of the country. 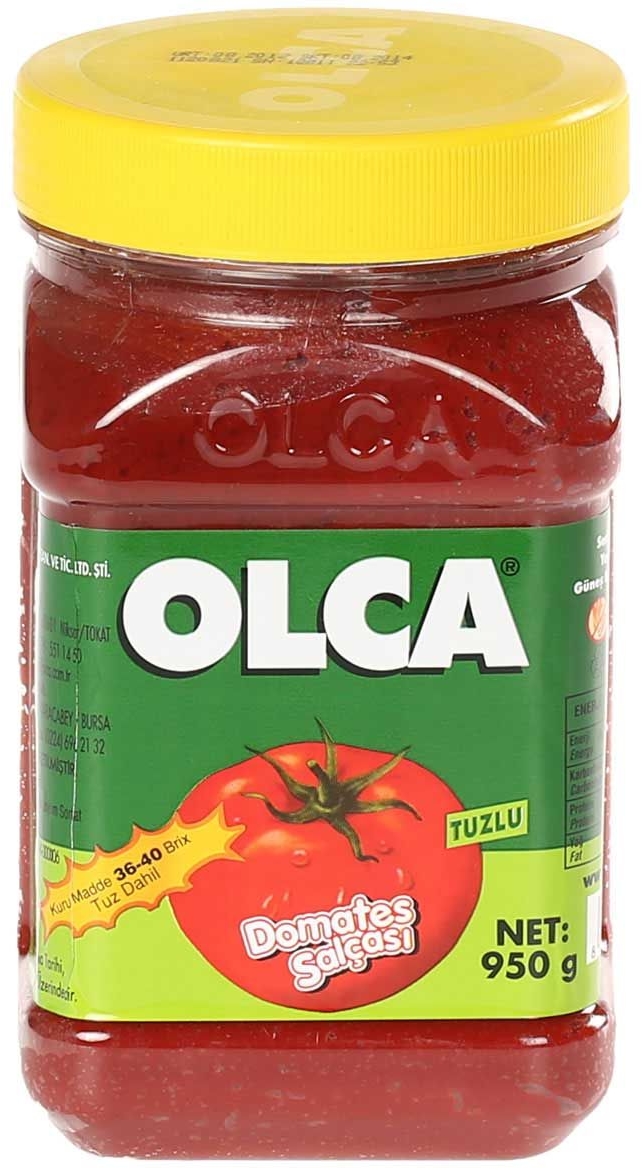 Currently, the market for pastes packed in PET packaging (polyethylene terephtalate) amounts to approximately 20 000 to 25 000 tonnes in Turkey. The Salkonder Association (Turkish association of food industry operators) recently got the Turkish government to ban the manufacturing and sale of tomato paste conditioned in PET packaging, which does not comply with the definition of tomato paste registered with the Codex Alimentarius and can be dangerous for the health of consumers. However, demand for this type of product remains high, particularly in the eastern part of Turkey, where the inclusion of preserving substances remains a sign of healthy and safe food. Some of these products are reportedly imported from the EU, which has been called on to reinforce its control measures.
Exports have been climbing steadily
Turkey exports high-quality products, particularly to the Middle-East, Japan and Russia. There are no duty-free quotas for Turkish products entering the European Union, so exports towards EU countries remain anecdotal. But paste exports benefit from financial subsidies of USD 40 per tonne, with an additional allocation of USD 7 per tonne intended for growers, but these payments appear to have been difficult to implement.
The Iraqi market absorbs approximately 90 000 tonnes of paste per year and represents a traditional and essential market outlet for Turkey. However, as Iran has increased its production and started exporting more and more products to Iraq over recent years, competition for this market outlet has increased considerably. Furthermore, Iraq is considering a major increase of its customs tariffs (to 35% or 50%?) within the next 6 to 12 months. But the very bad results of the Iranian industry over the 2018 harvest season should bolster Turkish exports to this destination. 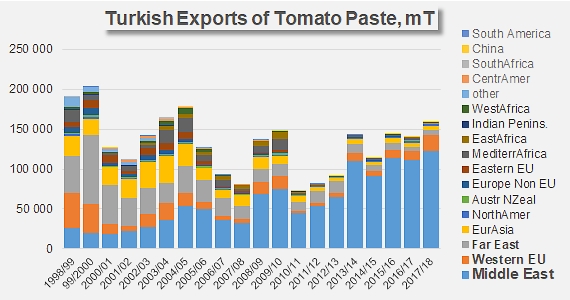 In 2017/2018, Turkey ranked sixth worldwide among countries that export tomato paste, behind Portugal but ahead of Iran. The volumes involved in the current marketing year amount to 159 300 mT (finished products), an increase of close on 20 000 mT (+14%) compared to the previous marketing year, and of 27 000 mT (+21%) compared to the average of the three previous marketing years.
The most frequently exported products are 12-30 Brix pastes, which accounted for close on 90% (131 000 mT) of the volumes shipped abroad over the past three marketing years, mostly in packs of less than 1 kg.
The geographically close markets of Iraq, Saudi Arabia and Syria are the main market outlets for Turkish pastes, and they absorbed on average 79% of Turkey's exports over the past three marketing years. Over the same period of time, Western Europe (Germany, the UK, Sweden, etc.) accounted for 9% of Turkey's foreign sales of paste, with Japan accounting for 5%. 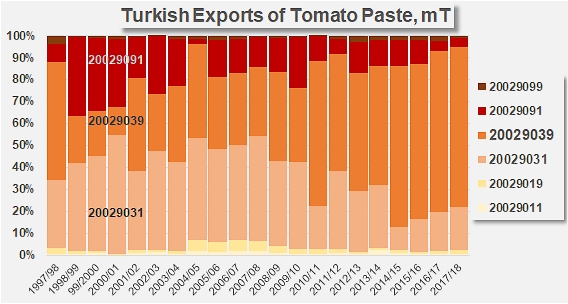 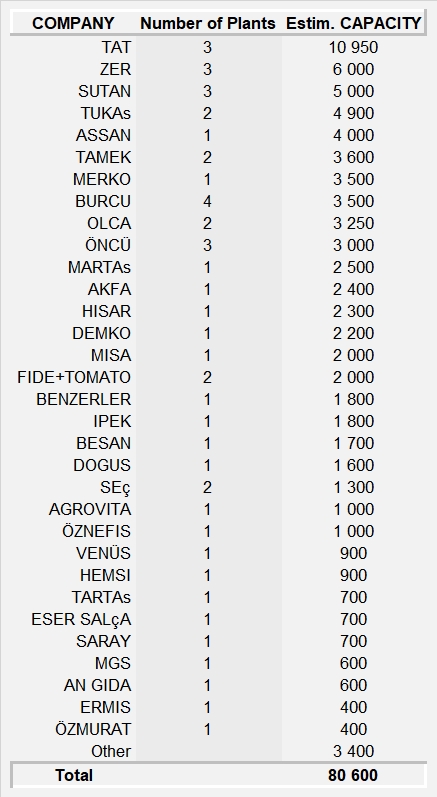